At the Blanton Museum of Art in Austin, Texas, 19 maps, nearly 440 years old, are on display — and they look spectacular. “Works on paper are delicate so we’re only allowed to put them on display for nine months out of 10 years,” says Blanton Museum communications director Carlotta Stankiewicz. 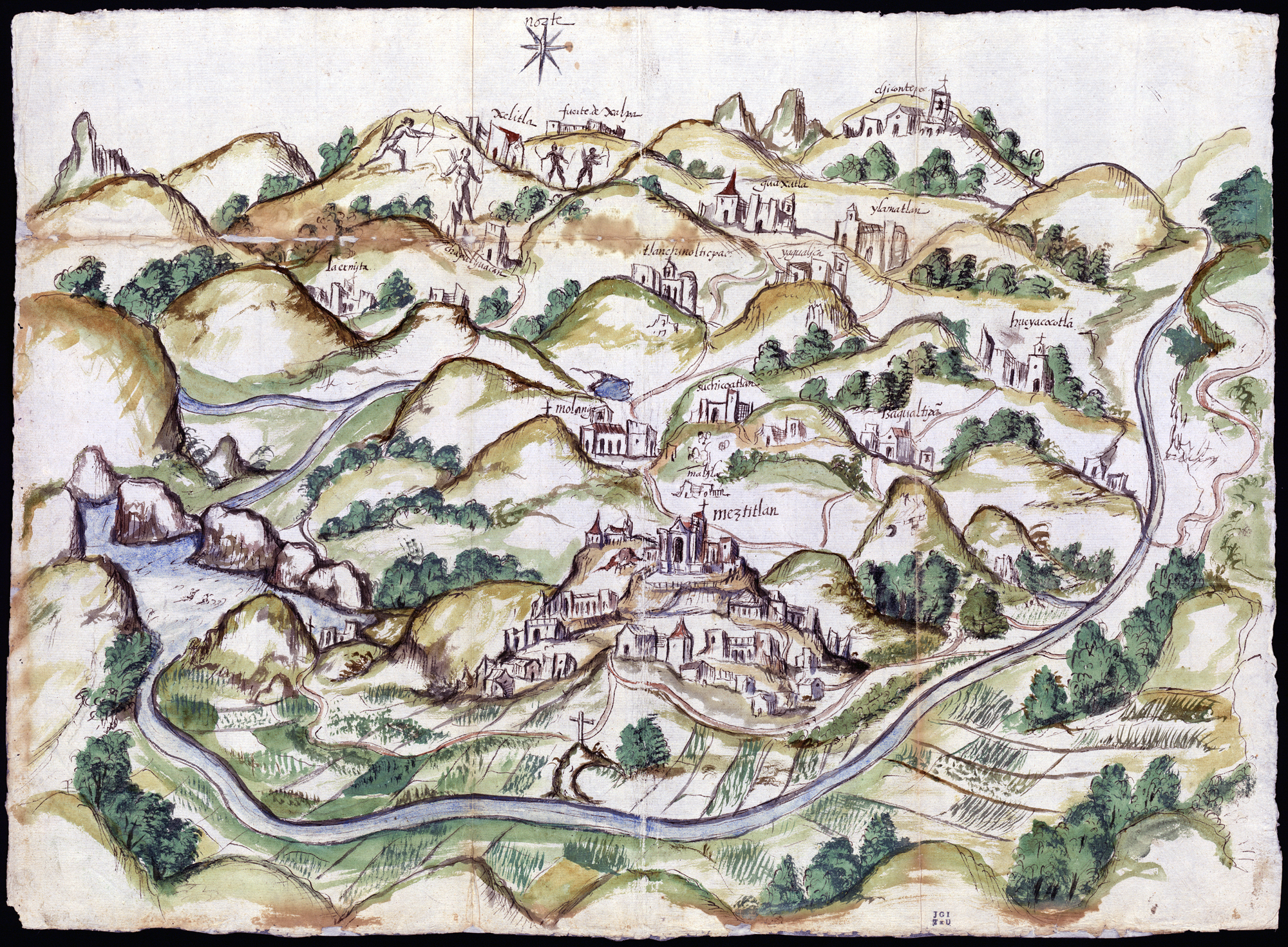 The Mapping Memory exhibition at the Blanton Museum of Art in Austin, Texas, displays maps made in the late 1500s of what is now Mexico. They were created by indigenous peoples to help Spanish invaders map occupied lands. This watercolor and ink map of Meztitlán was made in 1579 by Gabriel de Chavez.
Photo: Blanton Museum of Art

The Mapping Memory exhibition contains work by indigenous mapmakers from the late 1500s. The maps demonstrate a very different sense of space than maps drawn by Europeans. They’re not drawn to scale; instead, they’re deeply utilitarian. 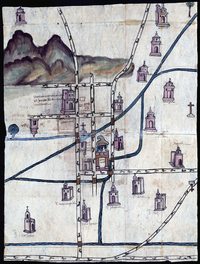 Pedro de San Agustín created this watercolor map of Culhuacán in 1580. He was a judge — a powerful figure in the town. “Before the conquest, nobles were the only ones trained as painters,” exhibit curator Rosario Granados explains. She notes that this map is made on bark paper, the traditional material used before the Spaniards arrived.
Photo: Blanton Museum of Art

A map of Culhuacán, for example, shows rivers running straight, with tiny arrows in the middle, indicating which way they flow. The pathways curve like snakes, with footprints or hoofprints indicating whether the paths can be walked or ridden.

“This was the first museum in the country to have a dedicated curator to Latin American art,” says Simone Wicha, director of the Blanton Museum of Art. The University of Texas at Austin has one of the earliest and largest collections of Mexican and Latin American art and documents in the world — more than 300,000 pieces — which it began acquiring in earnest in 1921. “The interest in Latin America was longstanding because Texas history is Mexican history and vice versa,” Wicha says.

In 1577, King Philip II of Spain wanted to know whom exactly he was ruling and where in his vast kingdom they were. His viceroy in what was then called New Spain had little idea, so he asked the indigenous groups in what is now Mexico, to draw the maps — which are now on view.

The star of the show is a large, colorful map of the city of Teozacoalco. It’s a globe of rivers and pathways, Spanish Catholic churches and forests. On the left side is a listing of the indigenous dynastic rulers. This map is an announcement of place and people, the makers perhaps harboring a sense of foreboding that the document they were drawing would long outlive the memory of their people. 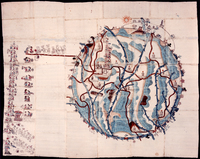 This large, watercolor map of Teozacoalco — made from 23 sheets of European paper pasted together — was created in 1580 by an unknown artist. The figures in the column on the left represent 10 generations of local rulers, the curator explains, including a series of footprints to indicate a marriage alliance with a neighboring town.
Photo: Blanton Museum of Art

Throughout the colonial period and particularly in the late 1500s, “the indigenous ways were very much alive,” says Rosario Granados who curated this exhibition. She believes it’s important to stress that “the conquest didn’t mean a complete destruction of that splendor.”

Granados says the maps are a remarkable blend of indigenous and Spanish culture at a moment when Spain ruled but hadn’t yet eradicated the region. So while there are paths, rivers, mountains and forests, there are also the square grids of Spanish towns with Catholic churches displayed prominently at the center of large plazas.

This watercolor map of Tetliztaca, made in 1581, is an example of the merging of indigenous and Western painting traditions, says Rosario Granados. In keeping with indigenous tradition, plants are depicted with roots, but the detail is “similar to what you could find in botanical treatises,” she says. She points to the three-dimensional shading of the churches as evidence of European influence.
Photo: Blanton Museum of Art

Many of the maps have a depiction of the sun on each side, orienting the traveler with the fireball arcing east to west. Granados says the indigenous maps and the Spanish maps exhibited here carry the strong imprint of each other’s cultures, 80 years after Hernán Cortés first waded ashore in 1519, 500 years ago, this past March.

“The question of how a handful of men conquered both the Aztec and the Inca has been always surprising,” Granados says. “And I think we really need to consider that question and reframe it in many different ways.”

Martín Cano’s watercolor and ink map of Ixtapalapa, made in 1580, shows a lagoon in one corner. Ixtapalapa means “water near the flat stones,” Granados explains.
Photo: Blanton Museum of Art

While the answer to that question may be guns, germs and steel, Granados says that for generations, the Spanish and indigenous cultures existed together, first side by side and later, one inside the other. She says the maps demonstrate that the indigenous groups that lived in Mexico were more than just fodder for genocide.

“We need to stop thinking that the conquest was the worst thing that ever happened to these local people,” Granados says. “It was a time of destruction, there is no doubt. But after that, something else happened. And it’s the hybridization that happened afterward that for me is very important.”

Granados says the collision of values and peoples slowly but inevitably gave birth to a distinctive New World culture — one that would branch off and become separate from its Spanish and indigenous roots. It’s a process that continues to this day. Maps show us not only what is where and how to get there, but also who we were — and perhaps, who we’re going to be. 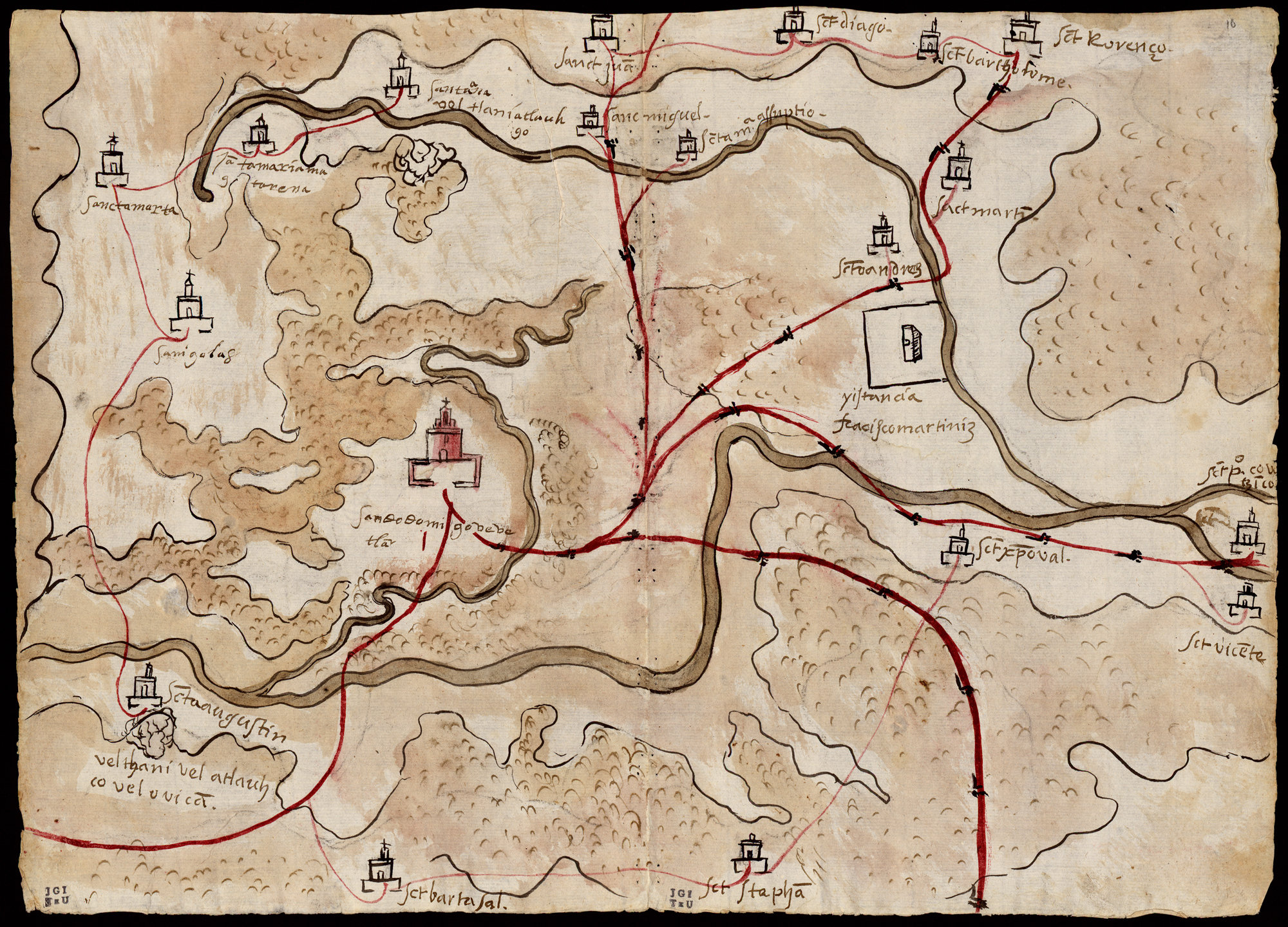 This 1579 watercolor and ink map of Gueguetlan has notations the provide guidance about a town being “in a very low area” or being a “dangerous place.” The inscriptions are in an indigenous language that Europeans wouldn’t understand. Granados asks: “Who were these inscriptions written for if they knew that no one but themselves would make sense of them?”
Photo: Blanton Museum of Art