North Texas theater artist Frida Espinosa-Muller has been developing a solo show about a seven-year-old girl who flees Honduras with her mother but ends up in a U.S. detention center. The show is premiering from Cara Mia Theatre during ‘Latinidades,’ its festival of solo performances, and the company hopes it’ll eventually tour. Art & Seek’s Jerome Weeks spoke with Espinosa-Muller about writing, directing and performing the play she calls “Ursula.”

Latinidades: A Festival of Solo Shows is presented by Cara Mia Theatre at the Latino Cultural Center. “Your Healing Is Killing Me” runs Aug. 22-25th. “Ursula” runs Aug. 29-Sept. 8.

The solo festival going on at Cara Mia Theatre is called’ “Latinidades.”

What does the word “Latinidades” mean?

Actually, it comes from the Latino sense that we are a different variety of Latinos.

So this means sort of “Latino variety” –  because one of the other solo shows is about Nuyorican music and another is by a queer Chicana from San Antonio. 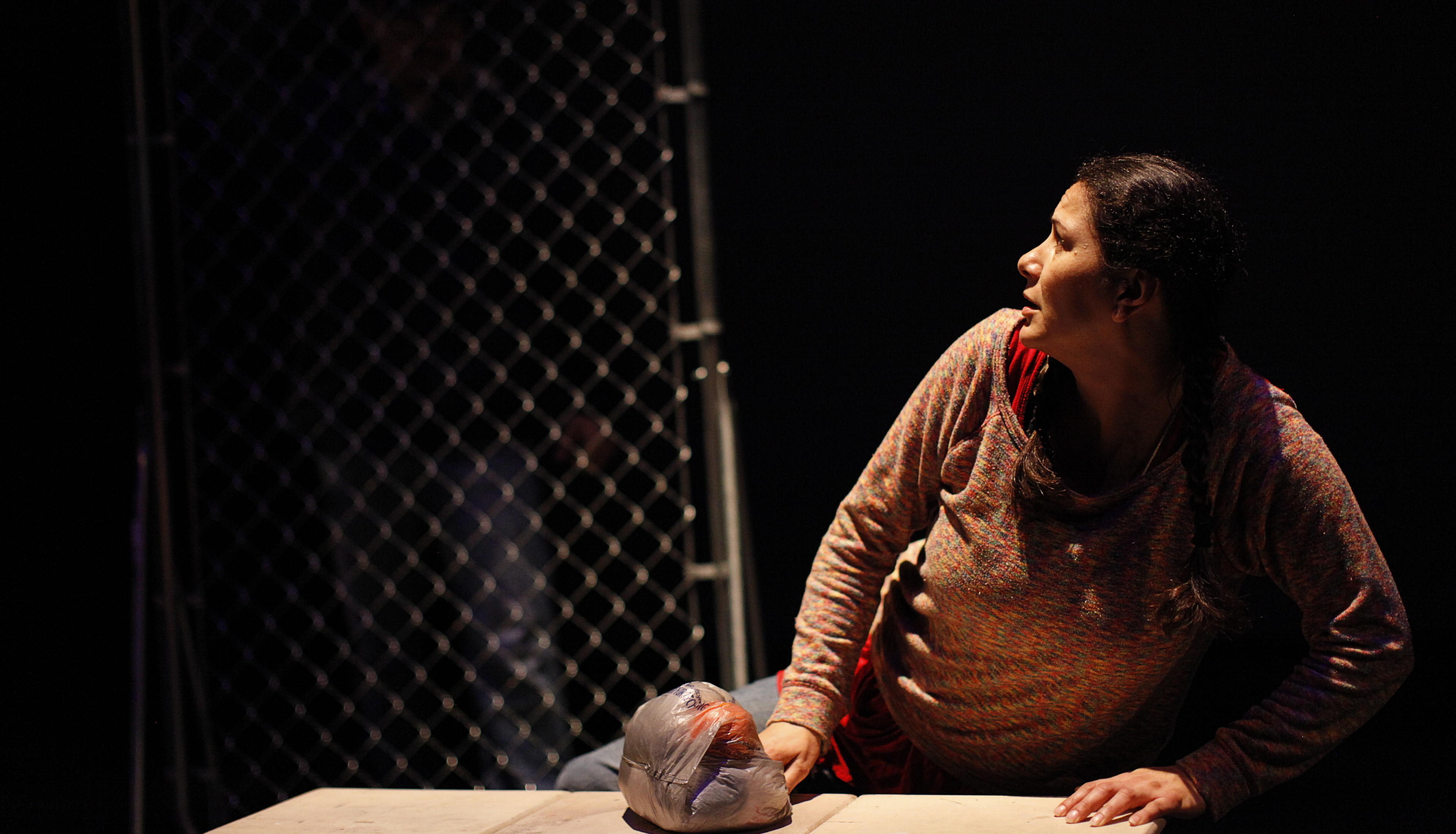 Frida Espinosa-Muller plays multiple children and three generations of women from the same family in “Ursula.” All photos: Morgana Willborn

Something else I should have you explain is the title of your own solo performance. It’s the story of an immigrant Latina child who’s trapped, seeking asylum in America. But she’s named Nadia – and your play is called “Ursula.” So who is Ursula?

Ursula is a place. Ursula is the detention center that is in McAllen. And people start calling it ‘Ursula’ because it’s at Ursula Street.

So it’s the detention center in McAllen, Texas, and that’s where the seven-year-old Nadia is eventually held. Why choose that center?

I was researching videos as well as written news and reading everything. And in this moment, after the ‘zero tolerance policy,’ a lot of the more difficult experiences were happening there.

It’s easy enough to see a playwright inspired by our entire immigration crisis and the controversies over the detention centers, breaking up families. But what lead you to the idea of doing it as a solo performance?

I think it became somehow more intimate and more like a personal conversation with the audience. I felt it’s more powerful that way.

So tell us about Nadia, the center of your play.

She is a seven-years-old girl from Honduras, and she is traveling only with her mother ’cause her dad has been killed by mareros, right, the gangs. And now her mother has been threatened. So they are running away, and she left the grandmother. 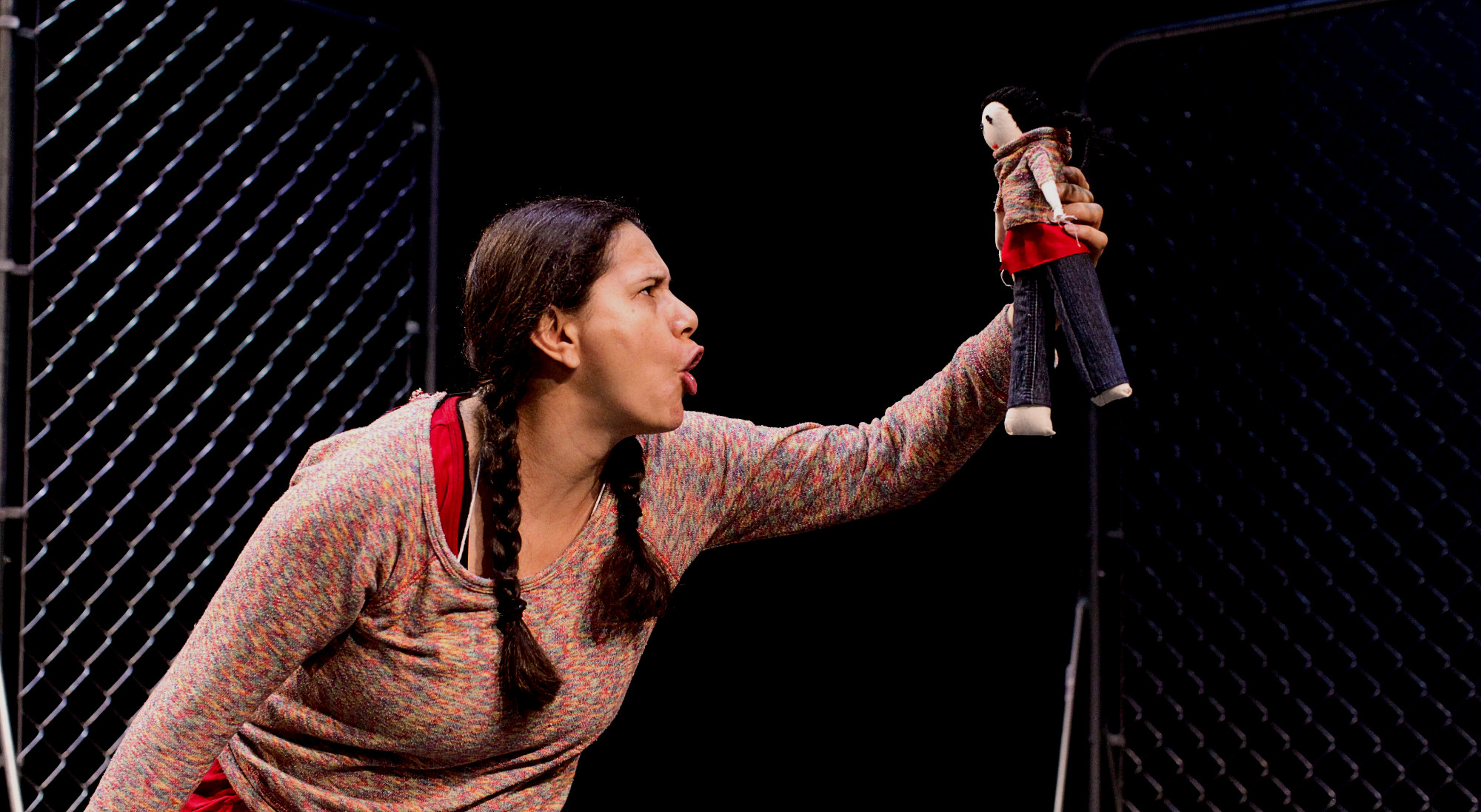 Have you played children before?

So if I understand this correctly, you’ll be playing three generations of women of the same family at once.

Yes, there’s a scene where I play Nadia, the mother and the grandmother.

Before they leave, heading toward the U.S., Nadia’s mother tells her one important thing to remember.

Yeah, yeah, yeah. What immigrants do – they write the addresses and telephone numbers on their clothes.

Address and telephone numbers of who?

Of an aunt that is already here in the States. But also they memorize the telephone numbers. If Nadia end up being alone, then the aunt is the person who will help her here. 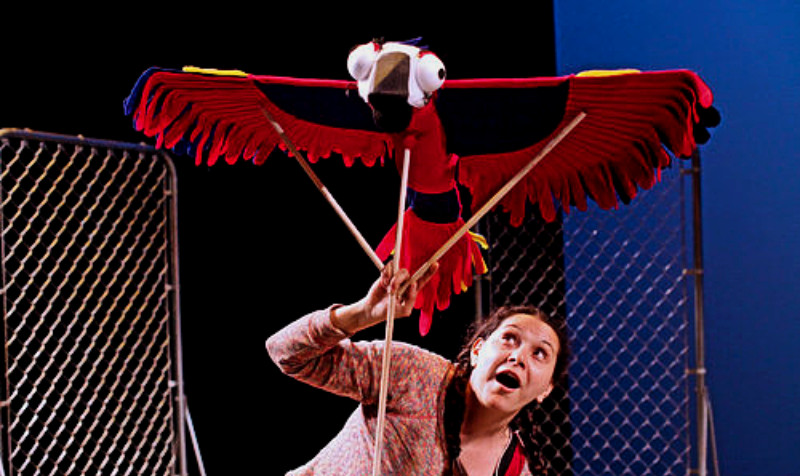 “Ursula,” your play, has elements of a fairy tale: the child lost in the woods and the child’s dreams of flying. And you emphasize this with your use of puppets and music. But it’s also a story of the extremely harsh realities currently on the US-Mexican border. So why tell this story – this way?

What I was thinking is like how to show this desire of the child that doesn’t rationalize too much how the system is working, but she feel it, and she reacts to it.

And I want to use this play as a tool to have a conversation that maybe help us to see people coming less like strangers that are coming to do harm. My hope is that we can bring this conversation to a point that is more human.