“Portraits of Courage: A Commander in Chief’s Tribute to America’s Warriors“ is appropriately installed in Freedom Hall at the George W.

“Portraits of Courage: A Commander in Chief’s Tribute to American Warriors” runs through Oct. 1. Details.

Bush Presidential Center in Dallas on the SMU campus.  Sixty-six portraits of US Military veterans painted by former President George W. Bush are on display  until October 1. The men and women featured are all members of TEAM 43 , wounded warriors, who are now weekend warriors as well. They are Veterans who mountain bike and golf with the President, whom they say “is an amazing mountain biker” and who “smokes me in golf.” But did they know he would also immortalize them in paint?

Although not yet  knowing he would be an artist himself, Bush and his wife, Laura, have long supported the arts. When he was governor, they commissioned Texas artists , including Cindi Holt, Pamela Nelson and Andrea Rosenberg, to design their  annual Christmas cards ,and Mrs. Bush created the Capitol Gallery to show off Texas talent.  The Christmas cards have become more personal since the former president left  office. This year, a Bush painting of a bright green Texas cactus adorned the card. 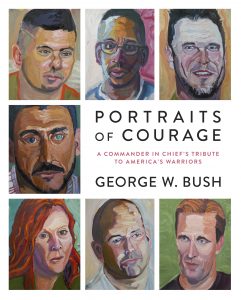 After years of government service, Bush found himself with time for leisure activities. Inspired by Winston Churchill’s book, Painting As a Pastime, Bush found serenity and purpose in painting. He also found his new avocation to be a winning way to call attention to  and fund the Bush Military Initiative , a program dedicated to enabling and encouraging the war-wounded men and women, who as Commander -in-Chief, he led into battle. The program helps these soldiers reenter civilian life.

The art installation and it’s accompanying book is not meant to be a painterly memoir or a scrapbook. The portraits and the publication, with the Veterans’ personal stories, are meant to open up our hearts – and our pocketbooks – to those returning home. All proceeds from the book sales benefit the initiative.

Bush’s  mission for the past year has been to paint the portraits of his Team 43 buddies, who represent thousands of others wounded in war since 9/11. He’s not trying to highlight their protheses or inward pain. And he’s not showing off his own painting prowess. Rather, he wants to  show off the patriotism of those who served. “Now”, he says, “we must serve them.”

But Bush admonishes, “Do not feel sorry for them. Hanging around with these veterans is uplifting. Painting these vets was a fantastic experience for me. When I paint, I think about their stories.”

That may be one reason why the portraits are painted boldly and bravely.

The most recent works are thick with paint, influenced by his most recent teacher,  Fort Worth artist Sedrick Huckaby. Broad strokes swirl around the canvas. The colors are rich and red. The gazes of expressive eyes meet ours and tell of new happiness, confusion, fear. One vet wrote, “The emptiness in my eyes was so evident.”

“Winston Churchill painted as a pastime, but George Bush paints as an artist,” says Huckaby.

“President Bush just loves to paint, and his dedication shows in his portraits of his military friends,” says Dallas artist Pamela Nelson, a long-time friend. “He thinks about them all the time. I have watched the process of this body of work, his best yet. Growth as an artist comes from passion. I am so proud of him.”

Bush confesses he was “a little nervous what [the veterans] will think of these paintings.” He says he’s been humbled, honored and overwhelmed by their  reactions.

Bush says he is just learning to paint.

A lot of paint and a lot of pride.

Gail Sachson owns Ask Me About Art, offering lectures, tours and program planning in the Arts.