Skip Navigation
Home > ArtandSeek.net > A Story Of War, Theft And A Beautiful Woman

After World War II, 202 paintings stolen by the Nazis toured the U.S. Now, the Cincinnati Art Museum has four of them back on view in the exhibition “Paintings, Politics and the Monuments Men.” NPR Special Correspondent Susan Stamberg reports on the exhibition opening this week. 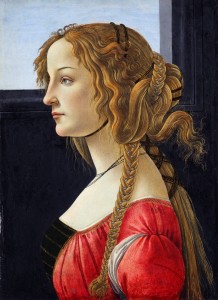 Gorgeous. Serene. You won’t believe the rocky life this glorious young woman has led since Botticelli painted her in Italy around 1475. First off, she doesn’t look her age. And with a passport that would make jet setters seem slug-a-beds, she’s seen parts of Europe that Americans flock to, and ends up right now in an American city that rarely tops European’s bucket lists: Cincinnati, Ohio. She’s part of the Cincinnati Art Museum exhibition, “Paintings, Politics and the Monuments Men.”

You may remember the George Clooney (be still my heart) 2014 film, about art experts, museum curators, others who volunteered to hunt down artworks confiscated by the Nazis in World War II, and hidden away for safekeeping by Hitler and his henchmen.

The movie is streaming these days, should you want to check it out. “It compresses the story,” says Peter Jonathan Bell, curator of the Cincinnati exhibition. Hey! It’s a movie! (and hey! it’s George Clooney!). The curator continues: “Still, it’s very good in taking the topic to a broad audience.” But I digress.

Back to the Botticelli. The lady, who most scholars believe is Simonetta Vespucci, was the toast of Florence in her day. Painters were besotted by her beauty. When she died at age 22, it is said that Botticelli asked to be buried at her feet. Nearly five centuries after he painted her, Simonetta got caught up in World War II. She’d been bought for Berlin museum collections at the end of the 19th century. In wartime the Nazis moved her first to another part of Berlin to shield her from Allied air raids, then stored her in, believe it or not, a salt mine in central Germany.

“Perfect protection,” says curator Bell. “Steady temperature, consistent humidity.” (A fascinating part of the story is the care with which the Germans treated the various artworks — those they owned, as well as those they stole. Some were put right next to the country’s gold reserve. “That’s how valuable they were felt to be,” Bell says.) Simonetta, the star of the Cincinnati show, was stored in salt mines near Merkers. That’s where General Patton’s Third Army discovered her and thousands of other looted artworks. 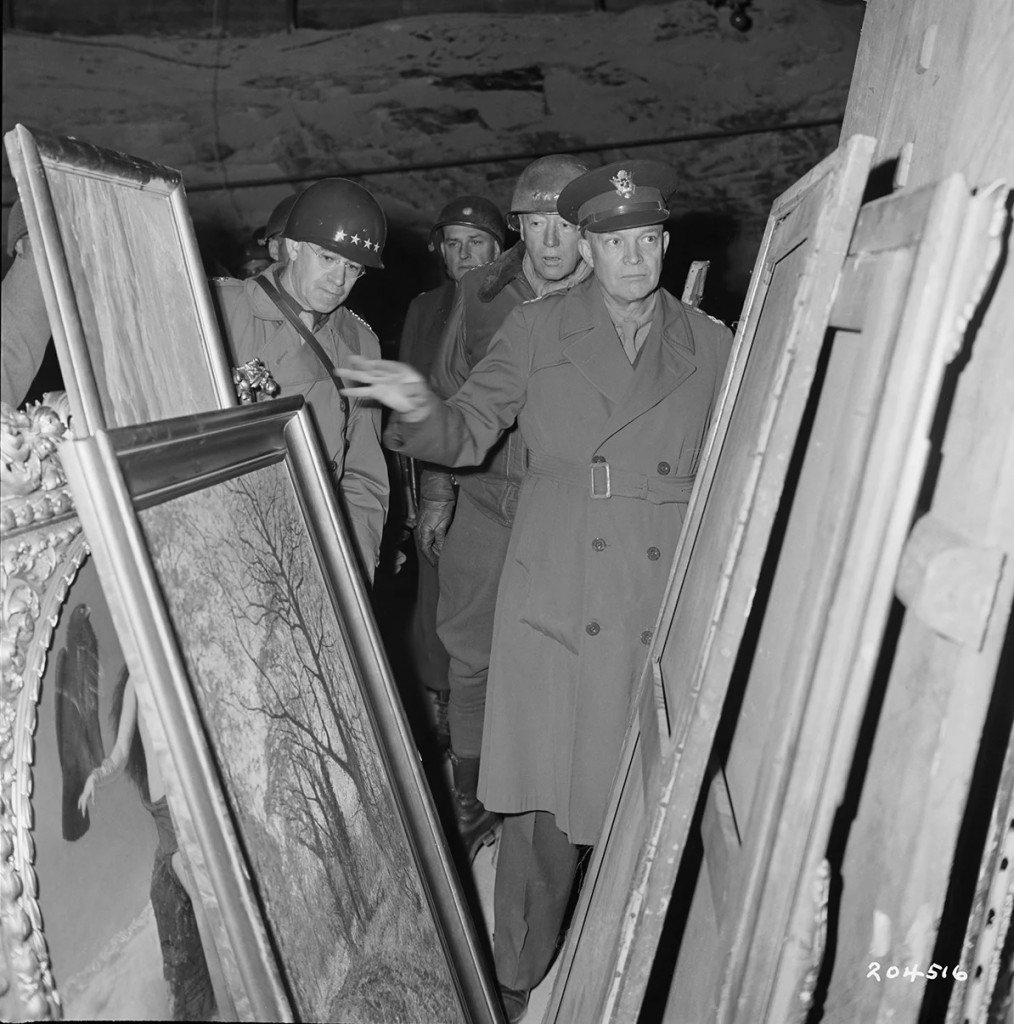 Once the Americans took over, Botticelli’s beautiful Italian Renaissance lady and various collections were moved to a storage depot in Wiesbaden. The depot was run by Walter Farmer, an architect, soldier and Monument Man from Cincinnati. With this exhibition, the Cincinnati museum is saluting Walter Farmer’s role during the war, as well as that hometown veteran’s longtime postwar involvement in the arts. 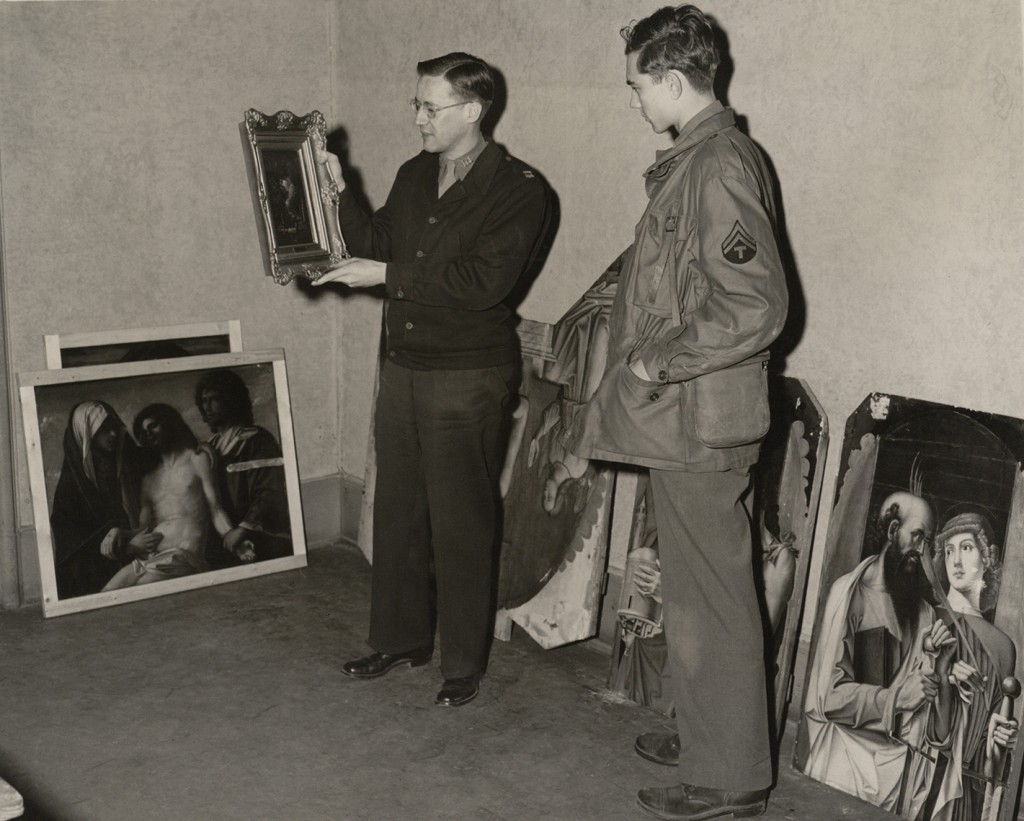 Farmer’s monuments job was to see to it that Simonetta plus 201 other works were properly handled as they rode a train across France, shipped to New York, and put on another train to Washington, D.C., to be protected at the National Gallery. The Truman administration decided the art should be displayed. In 1948 some one million visitors came to see it at the gallery. Then it toured the country. Ultimately, 2.5 million people got to visit the collection. Eventually, it was decided to return the Botticelli and others to Germany.

Here’s another rescued painting Walter Farmer’s long-ago vigilance may have helped museum visitors to see as of July 9 in Cincinnati. 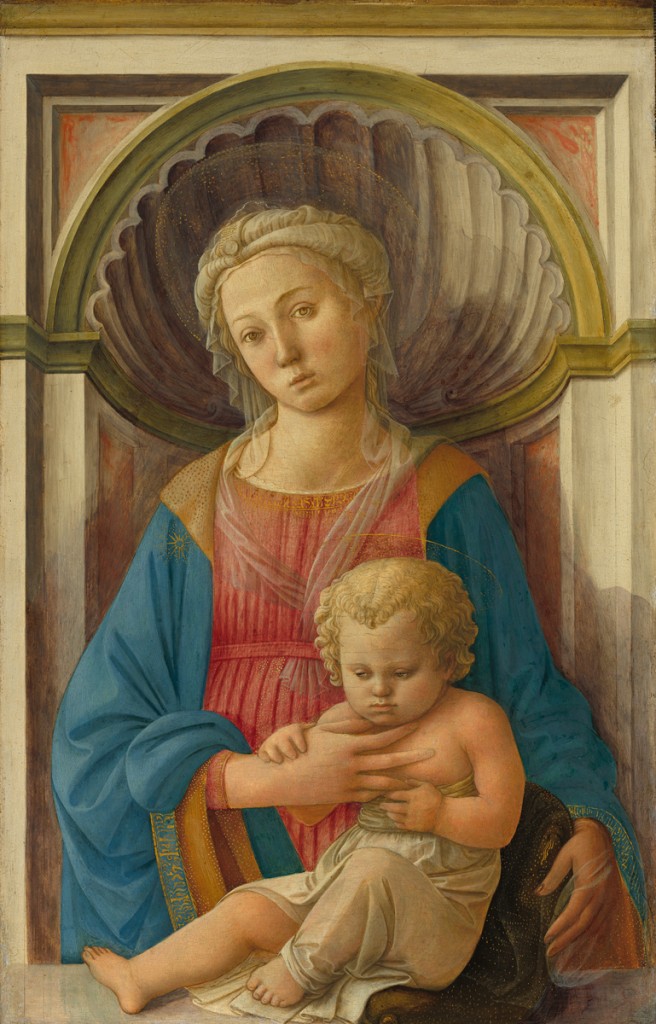 Think how many paintings of Madonna and Child there must be. I find this one especially interesting. It’s because of how Lippi handles his subjects. The baby reminds me of Mozart. Must be the curls. He’s so sturdy, hefty even. Looking down, thoughtful.

“Maybe contemplating his future,” Peter Bell speculates. And the mother. You rarely see serenity in her painted face. Here she’s sad, wistful, looking off “as if thinking of what lies ahead for her little boy.”

The Cincinnati Art Museum is showing just four of the original 202 artworks from Berlin museums that toured the U.S. after the war. The Nazis took upwards of a million pieces, from countries they invaded, from Jews they murdered, from dealers, others. Many have been returned to their original owners. But, says Peter Bell, “thousands and thousands still haven’t found their rightful homes.”

War is about hatreds and struggles, death, destruction, unspeakable cruelty. It’s also about salvation, and the will to preserve and endure.

The story of the 300 to 400 monuments men — and women, “shows the importance of art, especially in times of crisis.” Important enough to steal as war bounty, to risk lives to save, to recapture and reclaim. Thanks to the efforts of the monuments volunteers, the walls of European and American museums are studded with these ageless jewels of civilization.

Art Where You’re At is an informal series showcasing online offerings at museums you may not be able to visit.