Skip Navigation
Home > ArtandSeek.net > How The Coppell Arts Center Was Pushed By COVID To Improvise, Even Improve

Editor’s note: Reconnecting after a year of separation and loss is a work-in-progress. KERA and The Dallas Morning News are collaborating to document how the pandemic has changed the arts and culture scene in North Texas. KERA’s Jerome Weeks reports from Coppell on how COVID delayed — but also helped — a new arts center there.

A milling crowd at the Coppell Arts Center filled the lobby with chatter. This night was an invitation-only event: The North Texas “hootenany string band,” the Bodarks, were playing in the venue’s 440-seat main hall. Actually, the concert was also devised as a sneak peek, an opportunity for the center’s patrons to experience the place before its grand opening this fall.

And it was even a trial run for the center’s latest catering service. That’s because the Coppell Arts Center was supposed to open back in May — more than a year ago. 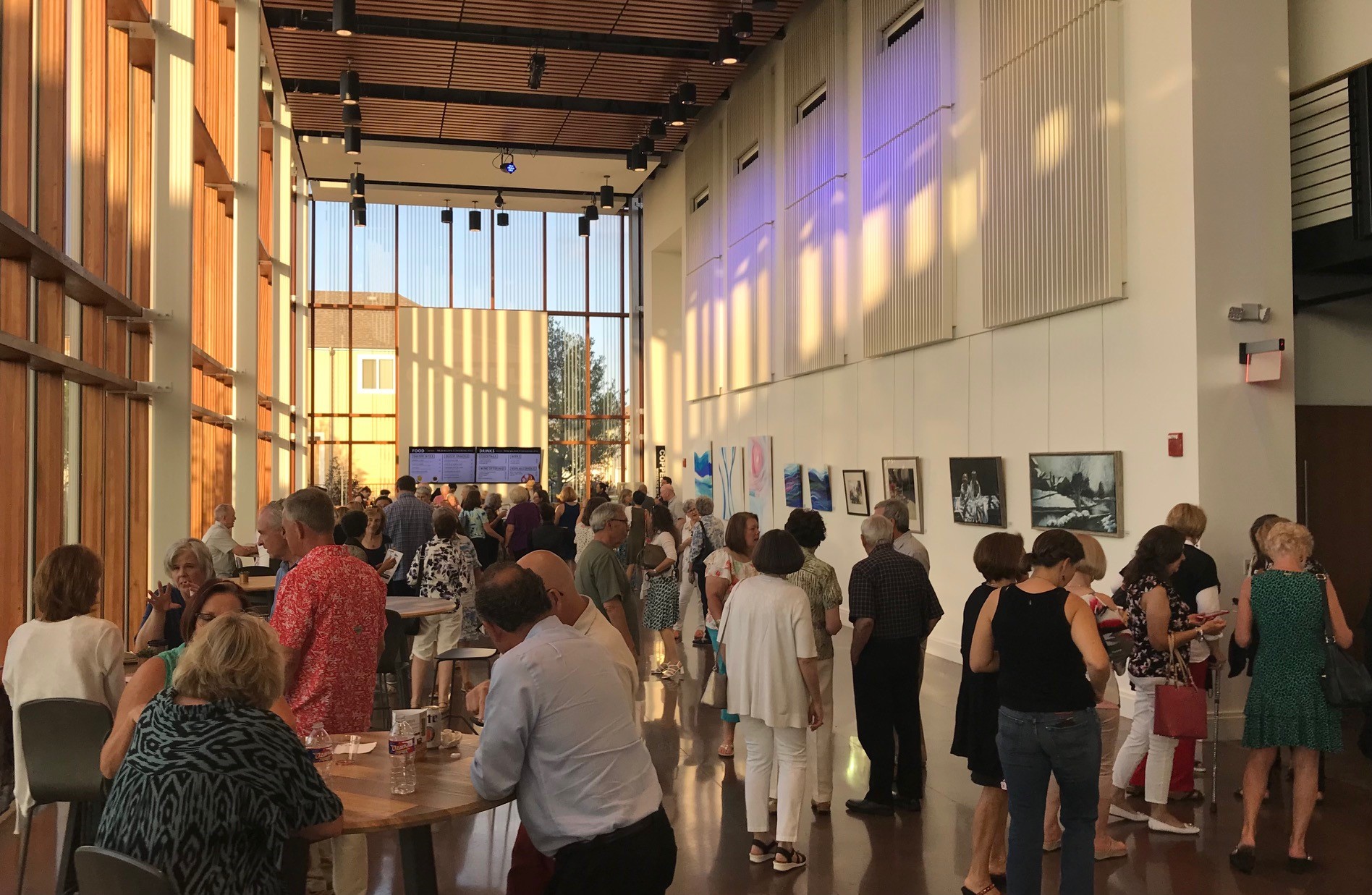 The center held an invitation-only event on June 30 that featured the band the Bodarks. The Mr. Cooper art gallery is part of the Coppell Arts Center lobby. Photo: Jerome Weeks

Of course, six weeks before that, everything shut down. COVID left the center in limbo: Its ambitious first season had already been announced, singer Kristin Chenoweth was set to help open the place — and the center had to postpone all that. Then postpone it again last fall because COVID wasn’t going away.

“With our caterer, we had just signed an agreement in February of 2020,” said Alex Hargis, Coppell Arts Center’s managing director. But soon after, the center had no real revenue coming in.

“By December, they terminated our agreement, and we had to find a new partner.”

So that’s what Hargis’ team and the arts center’s board have been doing the past year: getting replacements as needed, finding ways to finish out the building’s construction, re-juggling the schedule and giving the public the general impression the center is active.

Not fully open, perhaps, but far from closed. 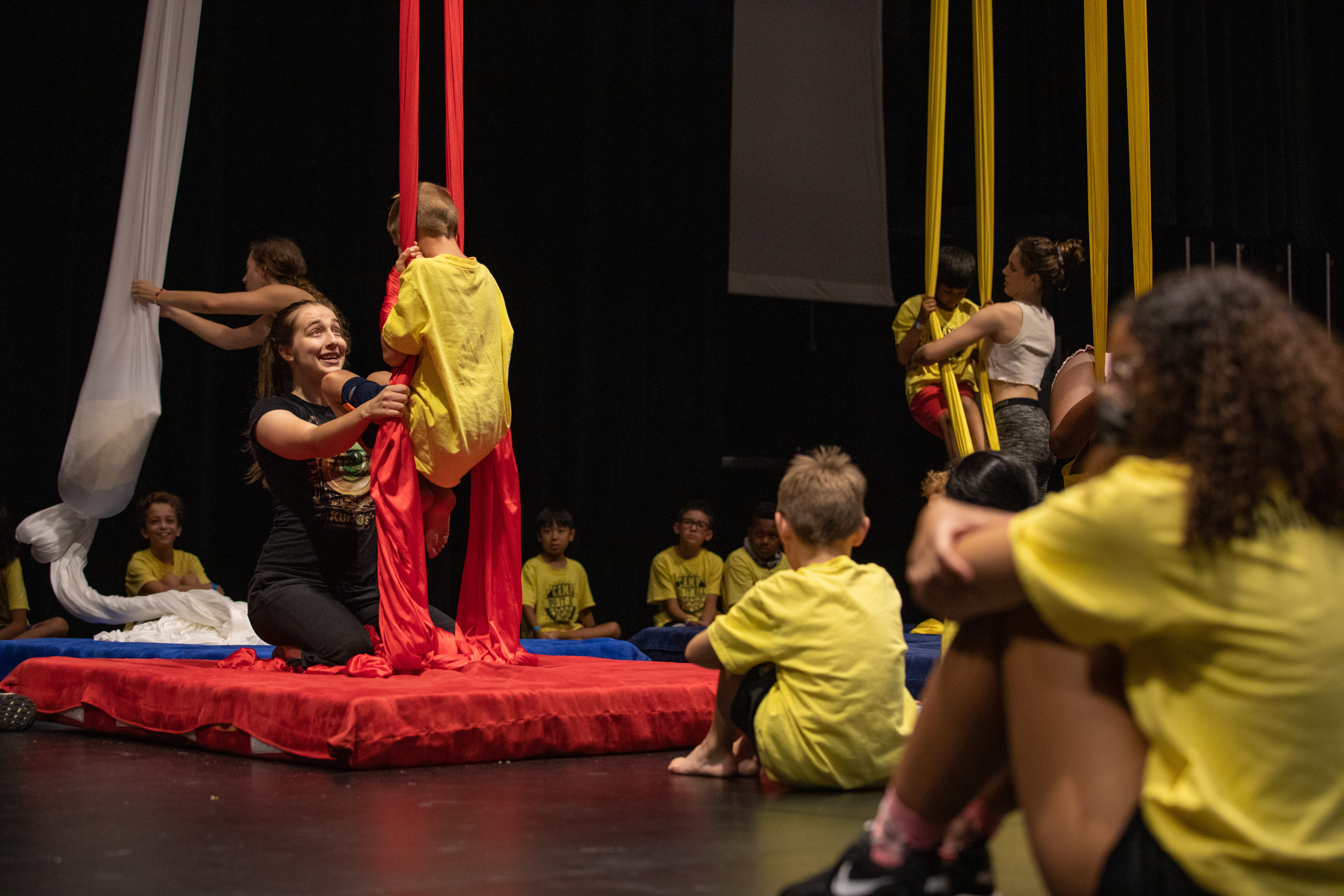 Kristen Croan, with Lone Star Circus, teaches children from the Camp Do-It-All summer camp how to use silk ropes at the Coppell Arts Center on June 23. Photo: Keren Carrión

“It’s about keeping a pulse right?” Hargis said. “Because when you’re opening a venue, you are also launching a brand and any part of brand awareness in the beginning is just getting eyeballs on your product. And that means getting people in the door.”

Arguably, perhaps, this past year of improvising schedules and brainstorming ideas actually made the new center better.

Hargis has had experience with fresh, new venues. While working for the AT&T Performing Arts Center, he managed the Wylie Theatre in the Dallas Arts District.

But this time, COVID presented unprecedented struggles — like major supply-chain disruptions. Deliveries of building materials and theatrical equipment were delayed for months.

“You saw all that hardwood in there?” he said, indicating the lobby and the main hall. “Well, it all came from factories in Ohio — and those all shut down. Then all the curtains that you see, coming out of New York, those all got closed up. “

The wood paneling and the curtains aren’t just for show — they help with the acoustics in both the main hall and the 120-seat, black-box theater. Mastering those acoustics is vital. You can practically see DFW Airport from Coppell. A low-flying jet roars directly overhead, on average, every 45 seconds. 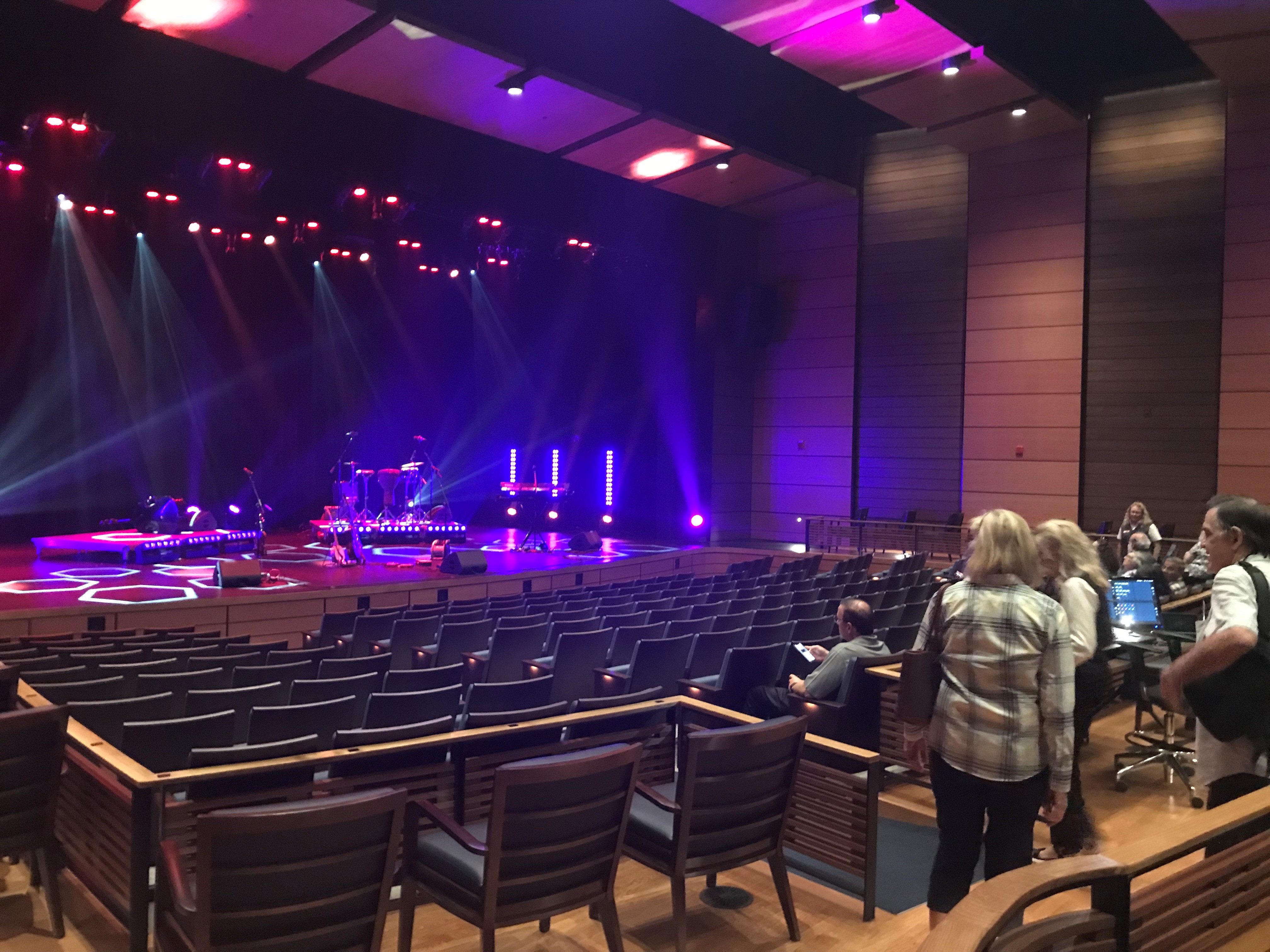 For people familiar with the Moody Performance Hall in the Dallas Arts District, the Coppell Arts Center looks familiar — very much like a smaller version of the Moody. That’s because both were devised by Kirk Johnson, director of sustainable design with the firm Corgan.

Coppell intended the $21 million facility partly to be a home for local arts groups — like Theatre Coppell and the Coppell Community Orchestra. But the center was also created to increase business traffic for an area in Coppell called Old Town. It’s mostly a cluster of restaurants and storefronts around a park, a pavilion — and the new Arts Center.

“When the arts center was being built, I was questioning what does this mean for my business?” said Kate Shema. “Is this competition?”

She credits the center with shifting gears quickly after the shutdown to bring people in safely. Drive-in movies went up in the parking lot, yoga and dance classes were held outdoors. They presented groups like the Arathi School of Dance during the Indian festival of Holi.

Shema even collaborated with the arts center to devise one of its new series: the Paint & Sip art class.

“They dove in right away,” she said, “to be a part of all of our efforts to bring people down here. And the merchants were happy to see it — in that maybe this could be like an arts district.” 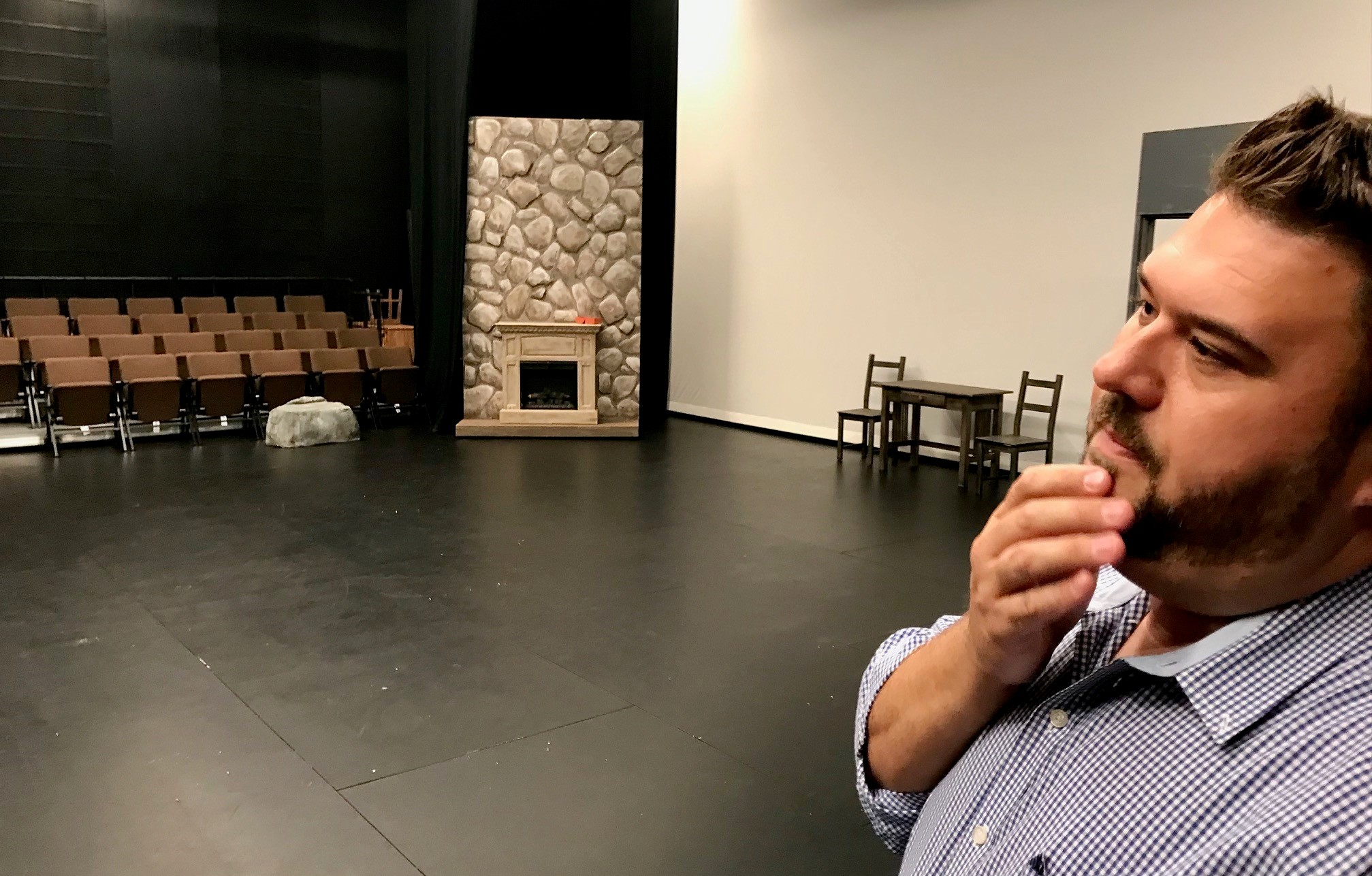 What Coppell has planned for future

In fact, becoming something of a ‘regional’ suburban arts district is what was in store for the facility. The first season was going to showcase Dallas performing arts groups — as a way for Coppell to stand apart in what has become a competitive market among suburban venues.

Hargis did present Dallas Black Dance Theatre — in a socially distanced performance this March. But COVID  interrupted his plans to bring in the Dallas Symphony and Theatre Three as well. Theatre Three’s s recent traveling, outdoor version of The Music Man played at the Coppell Senior Center. But it was originally devised with the Coppell Arts Center in mind.

Hargis still hopes to pursue that kind of North Texas, “local touring circuit” in the future.

“We’re not trying to pull people from downtown Dallas here,” Hargis said. “But if you live in Farmers Branch, Carrollton, Highland Village, this could be a place for you.”

All this improvising and rescheduling over the past year actually led to some improvements for the center — like having time to fine-tune the acoustics. Working relationships were formed with merchants and community arts groups. Some of the events that they scrambled to put together during the quarantine will continue as regular series.

And remember the caterer? The one they lost? The center went with their second choice — a local one. J. Macklin’s Grill is a nearby restaurant, and its parent company has a catering service.

“I’m just so happy that we’re able to give a local business a chance to grow,” said Penelope Furry, president of the arts center’s foundation. “They’ve got a super loyal following, so our community is excited that they are here.”

Furry says she likes to view this past year at the Coppell Arts Center as just a long — very long — soft opening. And there’s even some more time for  tinkering, if they wish.

That’s because Kristen Chenoweth will now be coming to help open the center — officially, finally — in September.

Photographer Keren Carrión is a corps member with Report for America, a national service program that places journalists into local newsrooms.

A version of this story aired on KERA FM and published on dallasnews.com. It will also appear in The Dallas Morning News.

The story of Amon G. Carter Sr., who was born in a log cabin and eventually became a powerful Texas media overlord because he owned the largest newspaper, radio, and television station in the state.

A 2-hour painting class with instructor Kate Shema of Createria Studios. Beer and wine will be available for purchase. Subject is painting a Longhorn Sunset.