Skip Navigation
Home > ArtandSeek.net > After The Museums & Billy Bob’s, Here’s A Guide To Some Fort Worth Gems

So your family and friends are in town to visit. Being a good host, you want to give them a special Fort Worth experience — beyond the museums and boot and scootin’ at Billy Bob’s.

How about the Best Maid Pickle Emporium? Yes, that’s just what it sounds like. A pickle museum. Or Inspiration Alley, an old warehouse alley lined with murals.

Here’s a guide to get you started exploring two of Fort Worth’s vibrant neighborhoods.

Make your way off the beaten path  — either by using the city’s robust bike-sharing program or walking — to enjoy how creative and unique Fort Worth is.

You may not know that Fort Worth has TWO state-designated cultural districts. The first houses the city’s art museums. To find the second, head over to The Near Southside skirts the outer edge of downtown heading south. The area is packed with things to do. Here are some streets to explore:

A pro tip: If you don’t want to drive, take the Trinity Railway Express (the TRE) to the T&P Terminal Station downtown. As you come out of the station tunnel it leads you right to South Main Street and Vickery Boulevard. 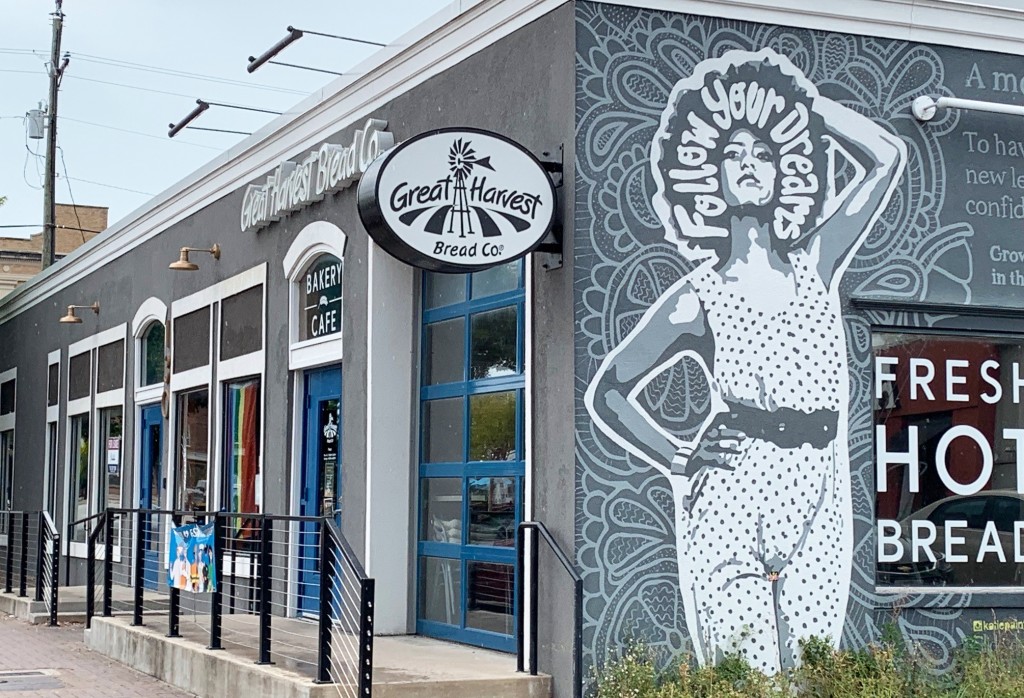 Bakeries like Great Harvest Bread Co. and Stir Crazy Baked Goods are great places to grab some baked goods. A lot of the murals in the Near Southside are commissioned-works by local artists. This mural is by Fort Worth artist Katie Murray. Photo: Gila Espinoza

Magnolia Avenue is the district’s main drag. With refurbished old structures and murals, the area has a very relaxed and funky feel. 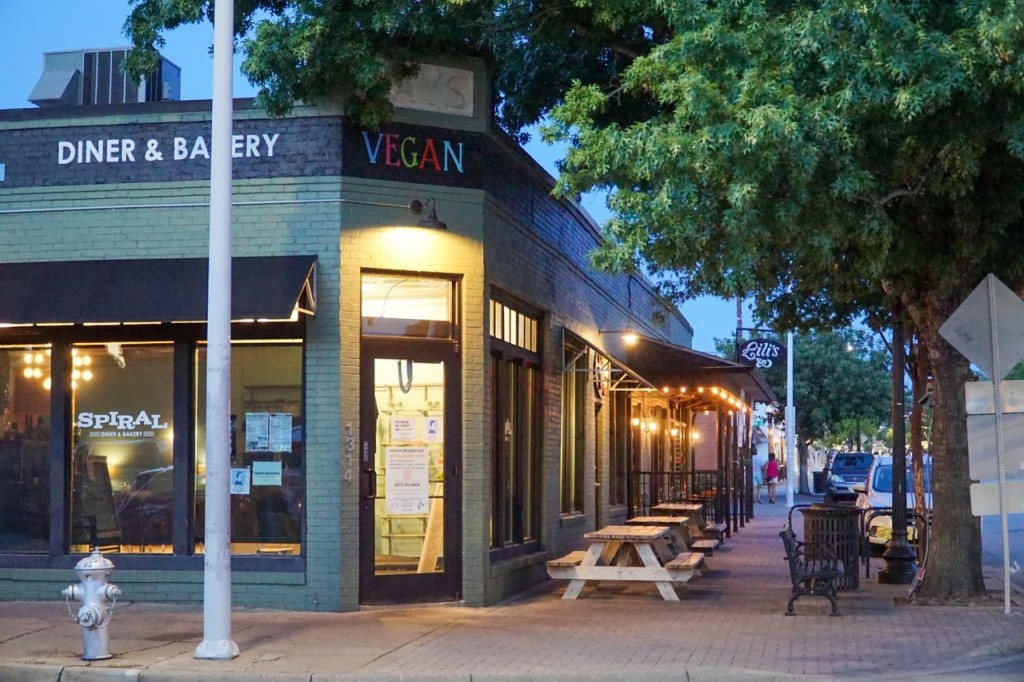 Dozens of artisan businesses line Magnolia and other streets in the district – coffee shops, bakeries, restaurants, breweries, and wine bars. 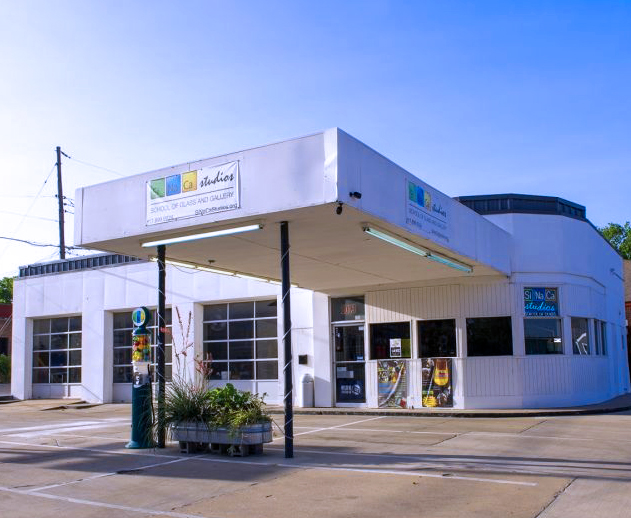 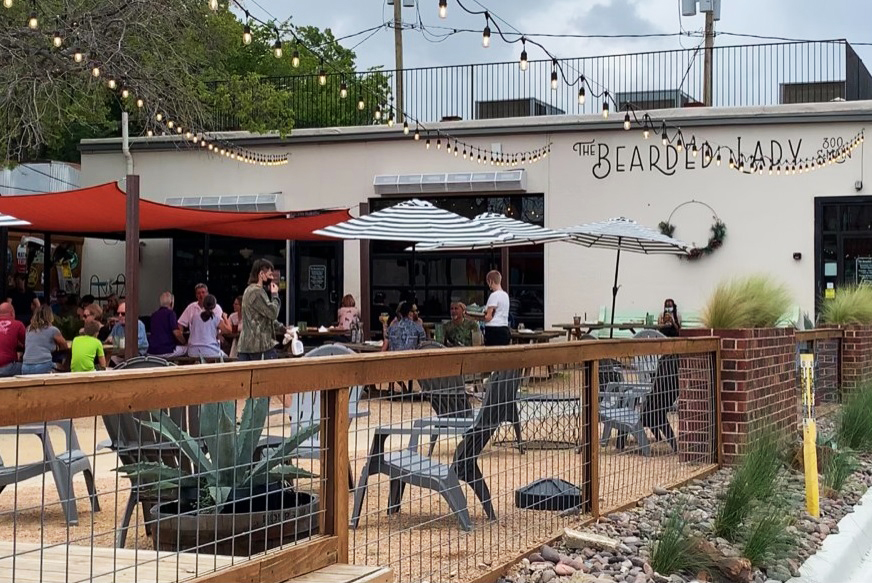 The Bearded Lady has a great patio. It’s great for people watching and for bringing your dog. Photo: Gila Espinoza.

South Main with its revamped streets has a super walkable feel. Like Magnolia Avenue, it has its fair share of brightly colored murals, restaurants with outdoor dining, and microbreweries. 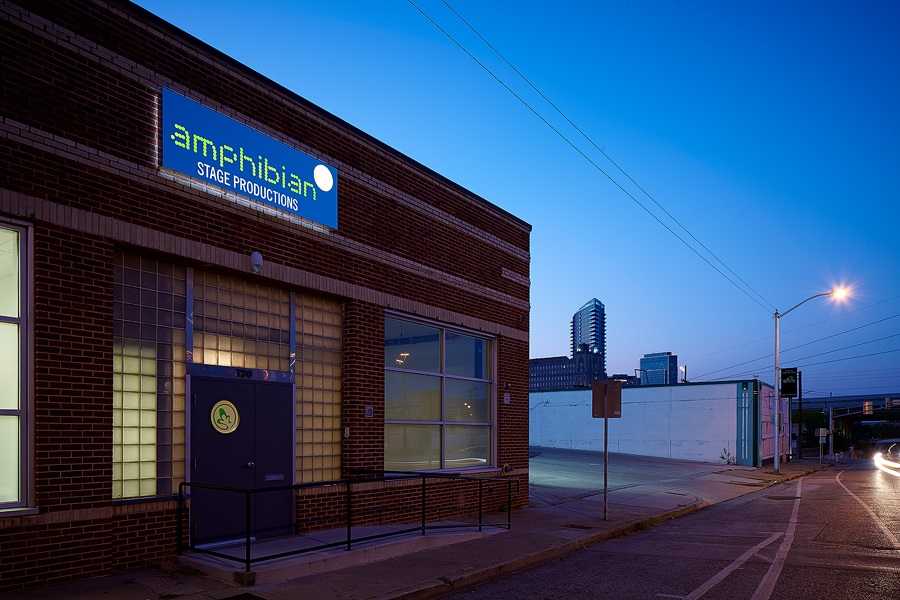 Everybody needs pie. Be sure to stop and have dessert at Emporium Pies before heading to see a show at the innovative Amphibian Stage Productions.

Just around the corner from South Main is Vickery Boulevard where you can find another noted live performance theater, Stage West. The longtime theater company is completing renovations to its theater and grounds that include a new patio stage in the back of the building.

Stage West’s new neighbor is the Best Maid Pickle Emporium. There you can learn how pickles are made and pick up all things pickles, including some sweet – or dill –  pickle swag. 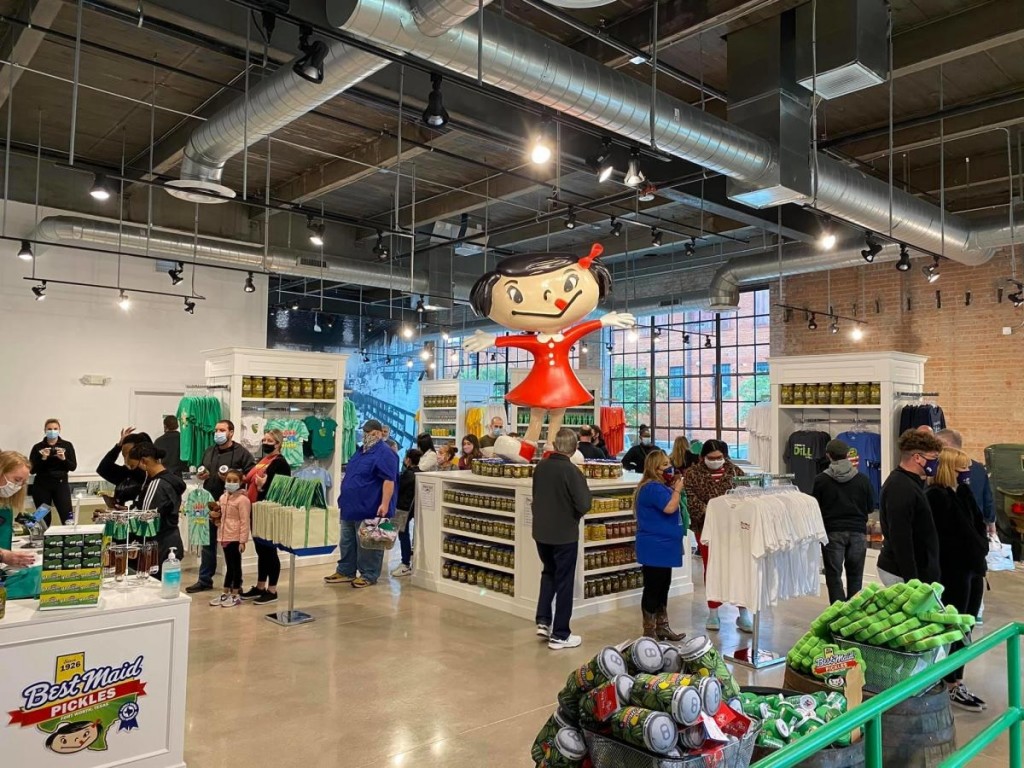 A new bowling alley recently opened up there on Vickery. Tailored to an above-21 crowd, Bowlounge features 16 vintage bowling lines, craft beers, a scratch kitchen, a patio, and a fire pit. 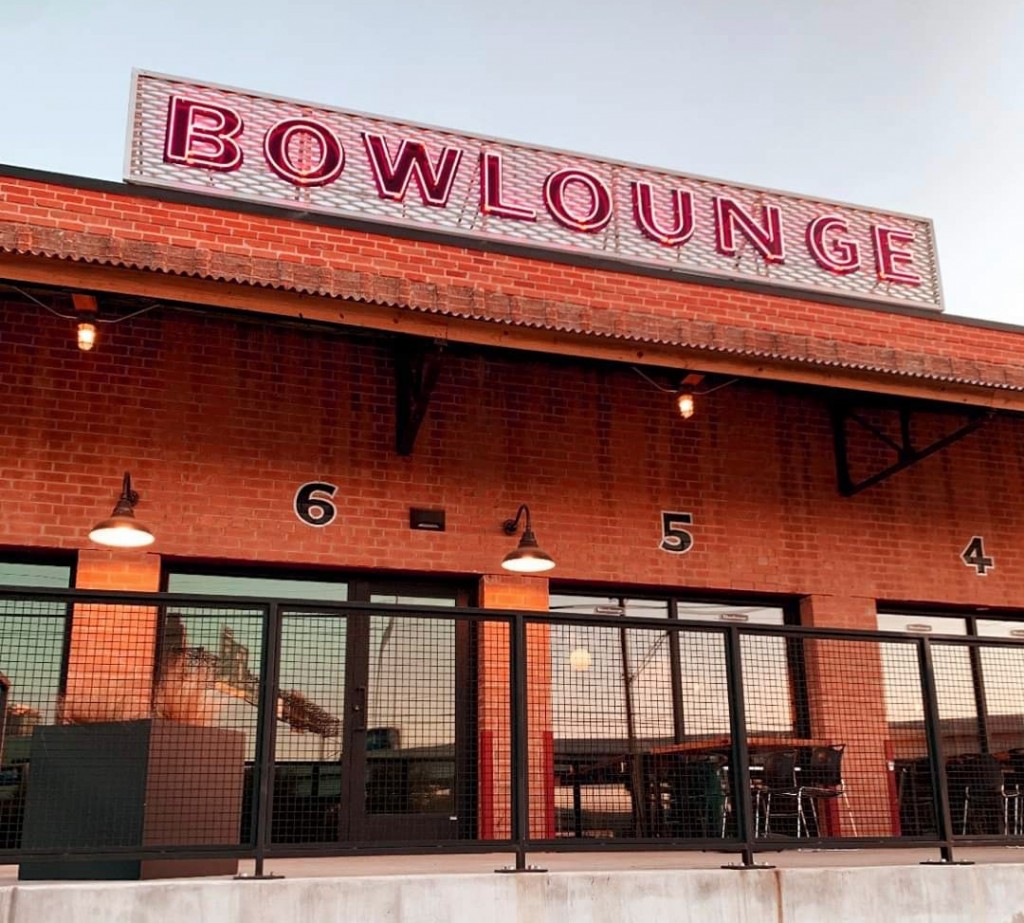 The city’s 7th Street entertainment district, between downtown and the cultural district, is well known and packed with crowds on weekends. But If you’re looking for something a little more hip and funky, check out The Foundry District, just to the north.

It’s a great place to spend an afternoon walking around, without having to jump in a car to go from place to place. This area acknowledges and pays tribute to Fort Worth’s past. 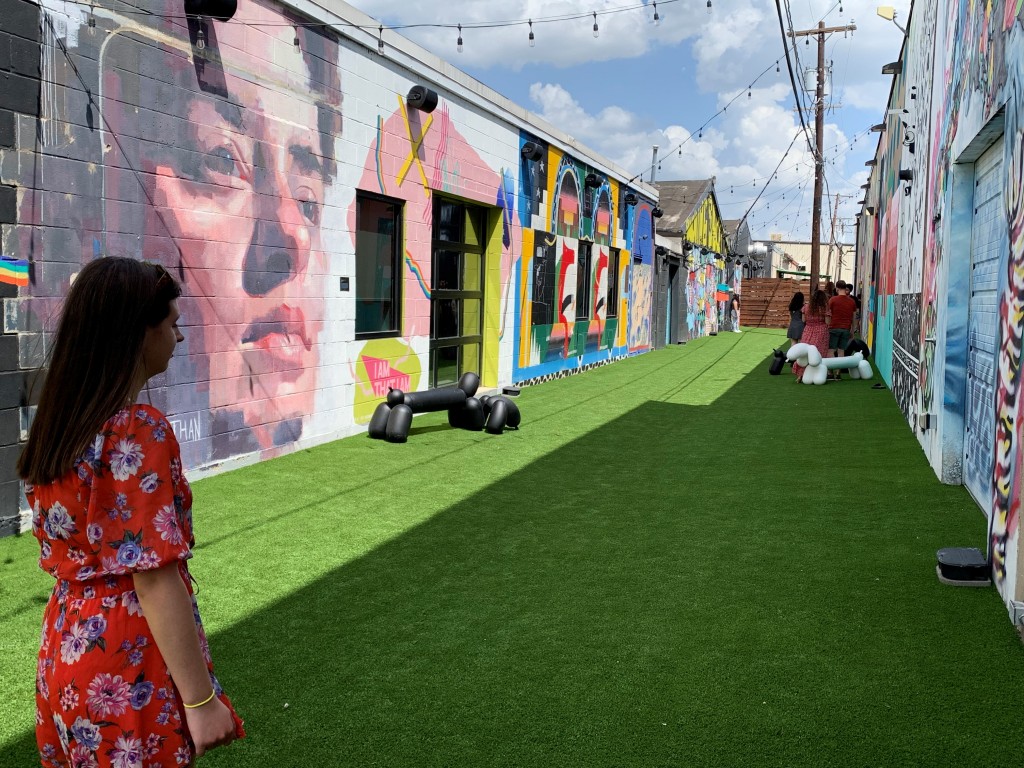 Although located close to the museums and the 7th Street area, the Foundry District is an easy stroll filled with murals and shops. Photo: Gila Espinoza

The Foundry District is centered in an old industrial park. The original warehouses were renovated, not torn down.

Inspiration Alley is an outdoor graffiti gallery and is the perfect place to take your visiting family and friends to get their Instagram pics. Developers in the neighborhood refer to Inspiration Alley as “the largest outdoor art gallery in the state.” There are over 70 pieces of art from over 50 artists on view in the district. 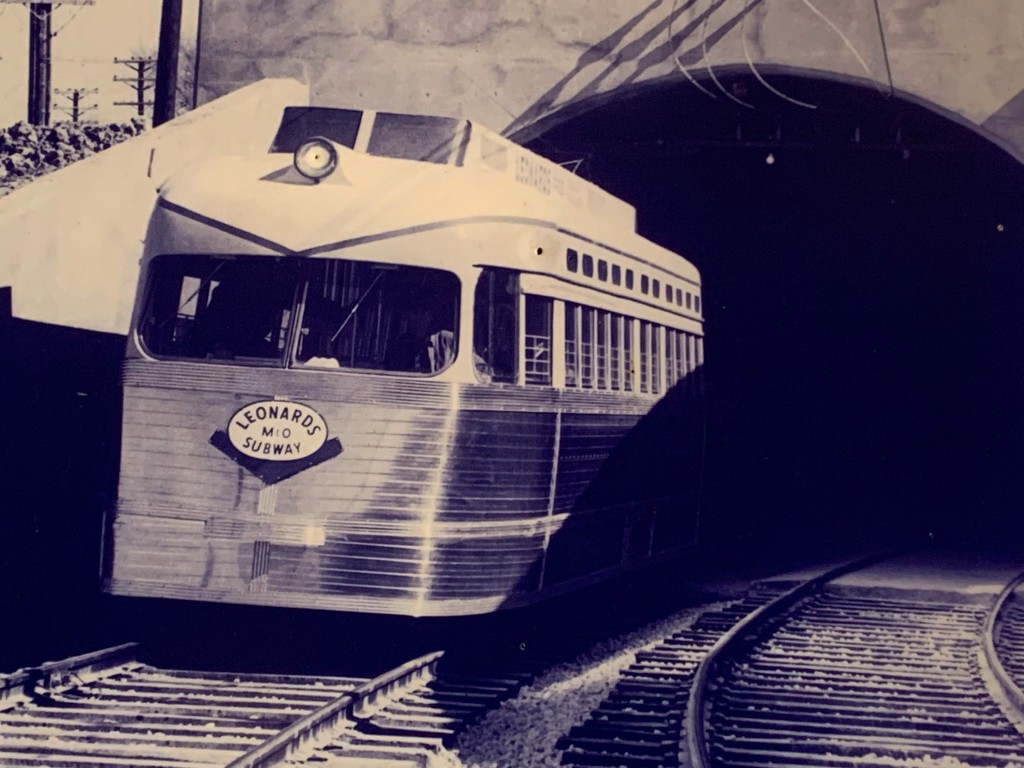 After you’re finished taking your pictures, walk over to the Leonards Department Store Museum [link]. The museum is dedicated to the store that operated for over 50 years and at one point occupied six blocks in downtown Fort Worth.

You’ll probably be hungry after visiting the museum because right next door is the M&O Station Grill.  It’s named after the old underground subway system that connected the edge of the town parking lot to the store. 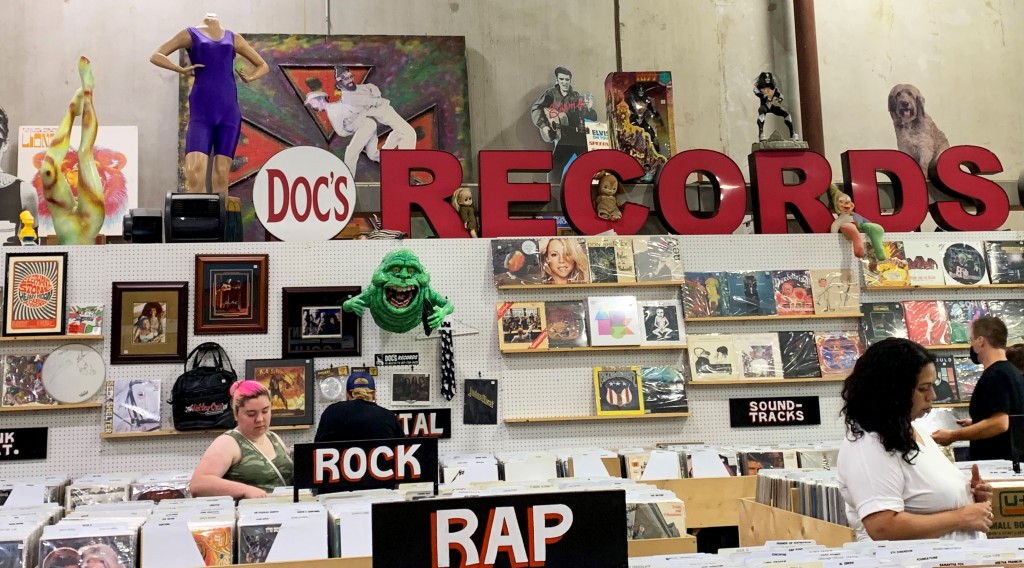 At Doc’s Records and Vintage, you can pick up some vinyl, a vintage outfit, and maybe catch a live concert. Photo: Gila Espinoza

Be sure to stop by Doc’s Records and Vintage, a huge record store and antique mall, perfect for vintage junkies. No plates and doilies here.

Time the end of your outing just right and you can catch a movie at the indie art movie house, the Grand Berry Theater. It’s named after two Fort Worth theaters built in the 1930s:  The Grand, whose patrons were primarily Black; and The Berry, whose audience was primarily White. The hip Grand Berry Theater is just two years old and seeks to welcome all audiences, and build community through the movies they screen.