Skip Navigation
Home > ArtandSeek.net > Afton Battle Wants To Take Fort Worth Opera To The Next Level

Can a 74-year-old opera company change directions when its last general director quit — after only two seasons? For a start, Fort Worth Opera hired the first black woman ever to lead the company. KERA’s Jerome Weeks talked with new general director Afton Battle about the changes she’s pushing.

Afton Battle, when you came to Fort Worth in September, you made a strong commitment to racial inclusion and equity for the opera. But your predecessors as general director programmed and even commissioned Spanish-language operas. They pushed opera programs for neighborhood schools. How is your commitment different?

The hill that I will gladly die on is that we are a company for the people – the people of Fort Worth and the communities that make up this city and North Texas. So that is the Latinx community, the black community, indigenous community, Asian community, the LGBTQIA+ community. And what we are doing will not stop at what is safe. It will not stop at schools. We will go into the community in a more deep and authentic way that brings in those multi-generational homes that reach beyond school-age children.
So we are taking it up a notch, and remaining committed to doing that — beyond what we do onstage. 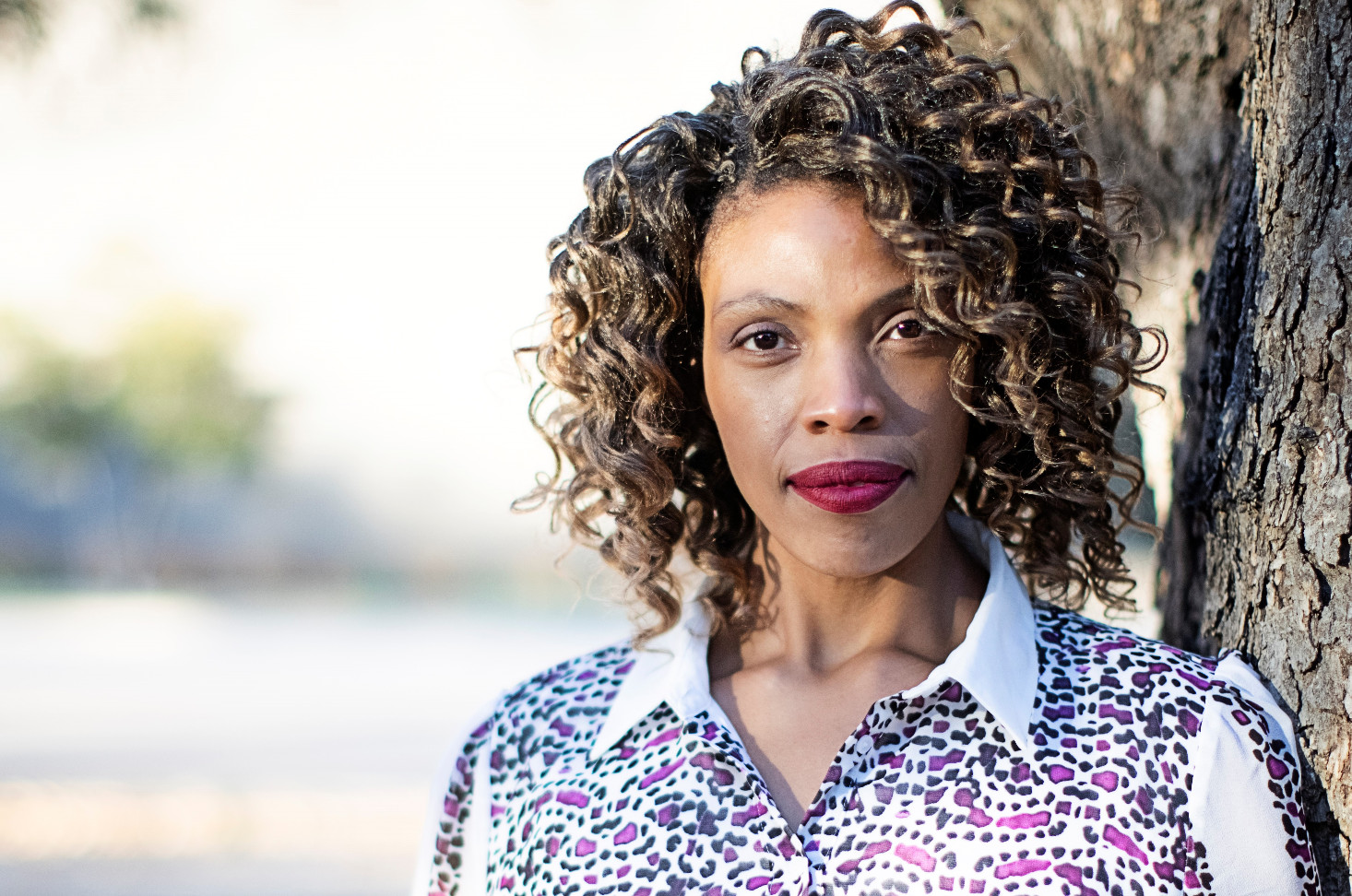 But if your aim is to appeal to, say, young black people, they grow up immersed in the riches of black music: jazz, blues, gospel, funk, hip-hop.

So what does opera have to say to them?

Wow. What does it have to say to them?

What did it have to say to you?

Yes, what did it have to say to me, yes.

To me, it said that while I come from this very rich cultural identity that is steeped in music, it all influenced classical music in some way. And it was influenced by classic music.

And what it says to a young black person is ‘We can do more than what society thinks that we should be doing.’ We can be more than hip-hop artists, blues artists, all of the above that you just mentioned. And we bring something unique to the stage in that way. 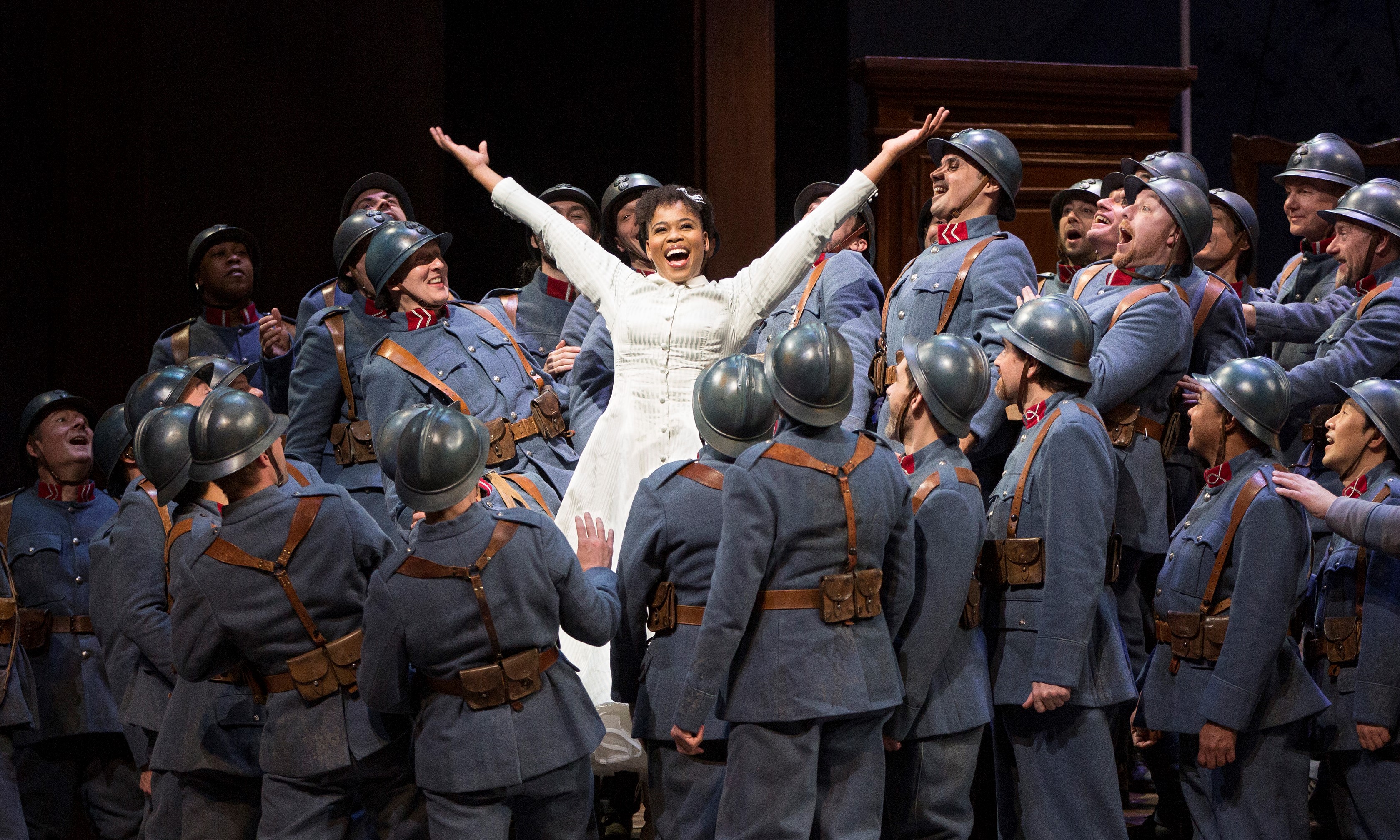 What is that ‘unique thing’?

There is something undeniably unique about a talented black voice. We grew up singing in church. So we grew up with gospel — or most of us did. So that’s within us.

And so we have this ability to run up and down a scale, up and down the keyboard, in all ranges of the voice. And people often don’t understand how that is possible. And a very good example of this is an old colleague of mine from the University of Kentucky called Calesta Day, who has very much made her mark with one video that happened to go viral of her singing a gospel piece in rehearsal [her version of Hear My Prayer has received millions of YouTube views, and she competed on America’s Got Talent in 2019].

And so it is all of that that oftentimes black voices and black talent come to the stage with, and people don’t know what to do. So what opera says to a black musician, a black artist, is “We can be all of those things. We can sing classical music. We can sing popular music on the radio — and bring ourselves, our authentic selves to the music.”

Aside from COVID, and all its obstacles, what have you learned, what do you see are the big challenges facing Fort Worth Opera?

COVID aside, the challenges are the same here that I think a lot of arts organizations especially opera organizations face. Which is an older demographic and not having a middle-aged and younger demographic to build that pipeline for future audiences.

With COVID, the challenge is fundraising while also trying to program for, literally, the unknown. 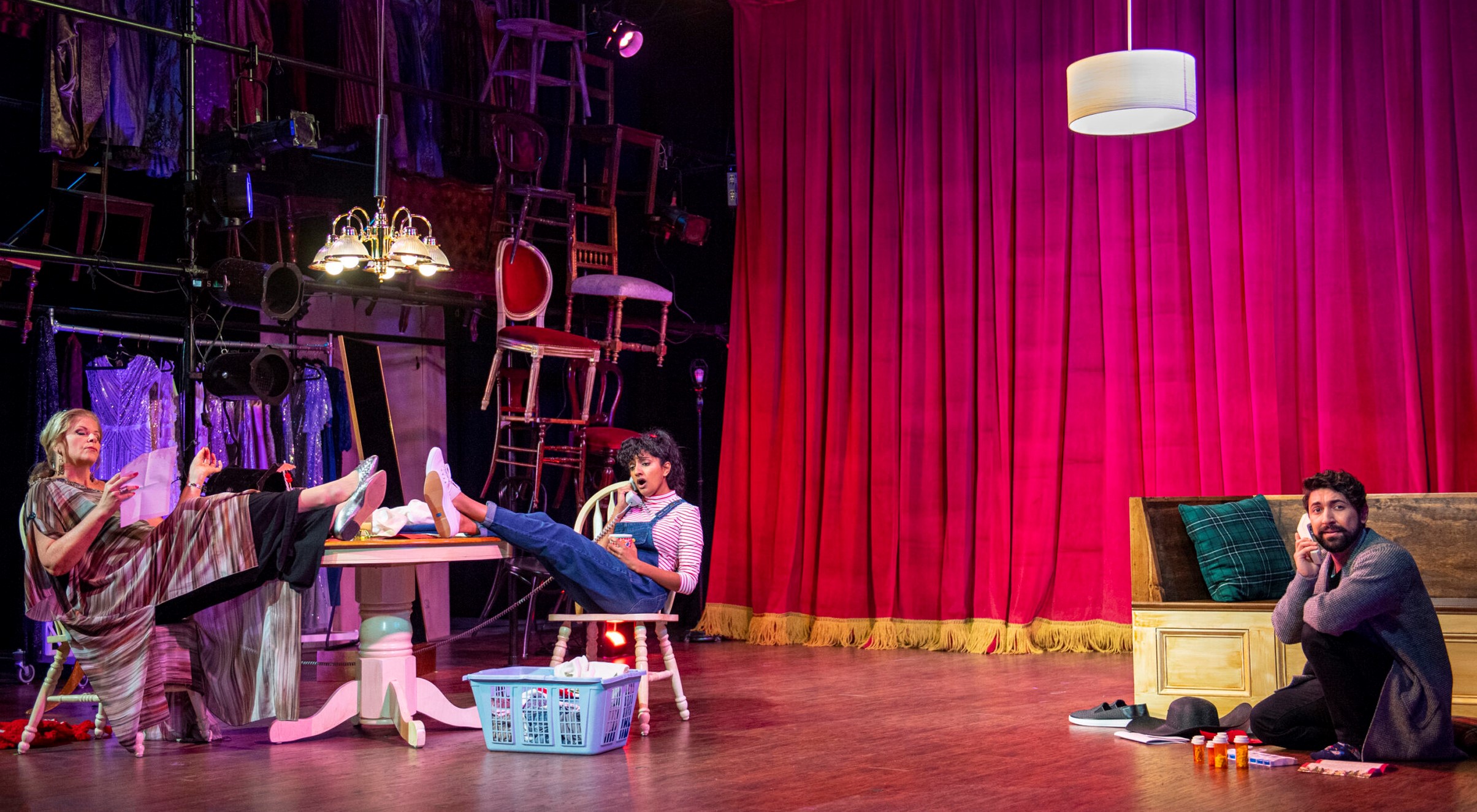 You were born in Lubbock, raised in El Paso, studied in Houston – then went East to sing in opera, to administrate with some major companies in New York, like the Joffrey Ballet, the National Black Theatre. But when you came to Fort Worth, your parents were already here. Your father Roger is senior pastor at Focus Faith Baptist Church in Fort Worth.

It was – and still is – weird, if I might say that, because I never thought that I’d move back to Texas. I do consider myself a Texan through and through. I’ve never let go of my Texas driver’s license. But I never thought I’d move back. And if I did, Houston or Austin would more likely be the place.

So coming back and moving to Fort Worth to run an opera company is really surreal. And when I told my parents about it, they were equally shocked.

So it’s surreal in that way but it’s also comforting because I’ve been gone from Texas for so long. So it is very comforting to have my parents closer, to have my sister, who lives in Carrolton, closer, my nephew closer, and all of my extended family live in Lubbock.

So it’s very comforting at this time of my life to have family close again.

But when do you think Fort Worth Opera will return to live performances?

We are working toward our season opener and our return to producing live opera. That is our goal: to be on stage, celebrating our 75th anniversary in November of 2021.

“Fort Worth Opera remains committed to bringing world-class music and musicians to Fort Worth and the surrounding area,” says FWO General Director Afton Battle. “Through the impactful partnerships with the Met, Tarrant County Pearls, I.M. Terrell and Opera San José, Fort Worth Opera will continue to expand our reach, engage our community, and bring accessible intersections with Fort Worth Opera that offer a rich experience while building the People’s Company.

“We know that our audience is counting on us, perhaps more than ever during the pandemic, to provide content that is meaningful, entertaining and uplifting,” says FWO Artistic Director Joe Illick. “So, we have created an extraordinary lineup of experiences for you during this time when we can’t perform for you in theaters!”

For the first time in Fort Worth Opera’s 74-year history, the company will be collaborating with the Metropolitan Opera for an opera film festival in North Texas. FWO’s Moonlight Film Fest, the second such collaboration of its type with the Met and a regional US opera company, following Arizona Opera this past November, will present three encore performances from the Met’s award-winning cinema series, The Met: Live in HD, February 4, 11, and 18.

February is Black History Month, and Fort Worth Opera is throwing a huge virtual celebration on Sunday, February 21, at 2:00 pm CST, to honor our Black community, and the pioneering generation of Black opera singers who paved the road for today’s exceptional musicians and performers. Hosted by WFAA Channel 8’s Daybreak anchor Tashara Parker, FWO’s star-studded benefit concert, A Night of Black Excellence: Past, Present, and Future, will feature some of the greatest Black opera singers of the 21st century.

Black History Month and this historic concert are generously sponsored by the Tarrant County Pearls Chapter of The Society, Incorporated. Fort Worth Opera is grateful for our partnership with Fort Worth’s IM Terrell Academy for STEM and VPA, allowing the company to film local performers in the auditorium for this exciting online event. All proceeds will go towards Fort Worth Opera’s landmark 75th anniversary season in the fall of 2021.

In March and April, Fort Worth Opera will be partnering with Opera San José to stream the company’s acclaimed digital production of composer Jake Heggie and librettist Gene Scheer’s Three Decembers. Last seen by audiences here in Fort Worth during FWO’s 2012 spring Festival, this stunning new film version of the 90-minute chamber opera stars world-renowned mezzo-soprano Susan Graham, soprano Maya Kherani, and baritone Efraín Solís, who joined Fort Worth Opera this fall for some marvelous performances through the FWO Green Room.

Based upon Tony Award-winning playwright Terrence McNally’s unpublished play, “Some Christmas Letters,” Three Decembers follows the fascinating portrait of a famous actress, Madeline Mitchell (Graham), and her volatile, often strained relationships with her two adult children, Beatrice (Kherani) and Charlie (Solís). Over three tumultuous decades, long-held family secrets come to life, and family dynamics are powerfully explored. This poignant American opera is about family — the ones we are born into and those we create. Dates, times, and ticket information will be announced at a later date.

In late spring, FWO will be collaborating with Rocket Cinema out of Austin, Texas, to present a pop-up, drive-in screening of our Texas-themed world premiere, Stone Soup, in the vast parking lot of Fort Worth stadium, Farrington Field. This charming Great Depression-era family fable was a hit with North Texas audiences when the company presented socially distanced performances this past November. Partially filmed on green screens with full costumes, set, and props, Stone Soup, the film, is FWO’s second foray into the world of cinema after Bernadette’s Cozy Book Nook, and one of three fantastic collaborations between FWO Artistic Director and composer Joe Illick and Grammy-winner Mark Campbell.

Initially set to take the virtual stage this fall, the company decided to offer live performances instead, as production wrapped on filming this delightful new family opera. FWO Manager of Education Sheran Goodspeed Keyton (Virtual project producer), Producer Charles W. Bush of Appointed Productions (Film Producer), and FWO Head of Music, Dr. Charlene Lotz (Music Producer) teamed up to create one of the most imaginative family offerings in recent memory with this 30-minute film. Fort Worth Opera looks forward to sharing Stone Soup with our community in the months ahead.

Throughout the months of March-May, weather-permitting, the company will present spring performances of FWO GO, its nationally recognized series of live pop-up concerts in neighborhoods throughout Dallas was Fort Worth. Fort Worth Opera’s incredibly talented young artists will perform opera arias, musical theater favorites, pop songs, and classic standards from the Great American Songbook from a flat-bed trailer “stage,” pulled by a pick-up truck. Finally, in May of 2021, tenor Darius Thomas, soprano Megan Koch, and FWO Head of Music and Director of the Children’s Opera Theatre, Dr. Charlene Lotz, will be featured in Fort Worth Opera’s hour-long Lesley Resident Artist Virtual Recital, streamed free for audiences through the FWO Green Room

Tickets can be purchased online at https://www.fwopera.org/moonlight-film-fest or by contacting Fort Worth Opera’s box office at 817.731.0726, Monday-Friday, 9 am–5 pm CST

Sponsored by Tarrant County Pearls Chapter of The Society, Incorporated

Available to stream live through the FWO Green Room

$25 Individual tickets for homes where only an individual will be viewing the recital.

$40 Household tickets for households with more than one individual viewing this recital.

$80 VIP tickets include recital and virtual reception, including an online meet & greet.

Tickets can be purchased online at https://www.fwopera.org/a-night-of-black-excellence or by contacting Fort Worth Opera’s box office at 817.731.0726, Monday-Friday, 9 am–5 pm CST

Available to stream through the FWO Green Room

Available to stream through the FWO Green Room

Tickets are free for the public