Skip Navigation
Home > ArtandSeek.net > Catch A Glimpse Of The “Wyooter” And Other Creepy Tales At This Virtual Showcase

Hidden within the special collections at the University of North Texas is a haunting image of a monster known as the Tennessean Wyooter.

“The Wyooter himself is described as being over 12 feet tall,” says Meagan May, a public services librarian with the University of North Texas. “From the story, standing still looks a lot like a big old oak tree, but moving, looks like the devil himself.” 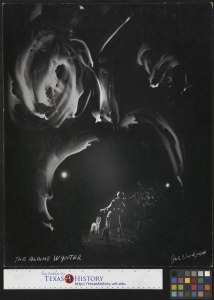 May says a photo of the Wyooter is part of the Clark Family Photography Collection.

The photographer was behind one of the whiskey company’s most successful ad campaigns.

“Clark created this legend taking inspiration from Appalachian folklore,” May said. “The story first appeared in 1969 in a book called  “I Remember” that was actually published privately for the Tennessee Squire Association, which is sort of this Jack Daniels fan club.”

The creature quickly became a part of Jack Daniels lore. There’s even a cocktail named after the creature, the Wyooter Hooter.

Here’s a link to register and a schedule of the showcase: