Deep Ellum is known for its funky murals, unique businesses and down-to-earth locals. Right now, it features some of the most eye-catching and thought-provoking street-art in honor of George Floyd and in support of the Black Lives Matter Movement.

Art has always been a coping mechanism and a way to inspire change. Many artists are using their medium to speak out and connect with others.

“I feel like my art is the only thing I can do in order to get my frustrations out,” said Desiree Vaniecia, a painter and Dallas ISD teacher. “It calls to attention the amount of pain this is causing me and my community.”

Vaniecia painted a large mural in Deep Ellum depicting a black female figure with a large yellow halo around her head filled with the names of victims of police brutality. At the top of the halo, in large script, a message reads, “Lift Every Voice.” 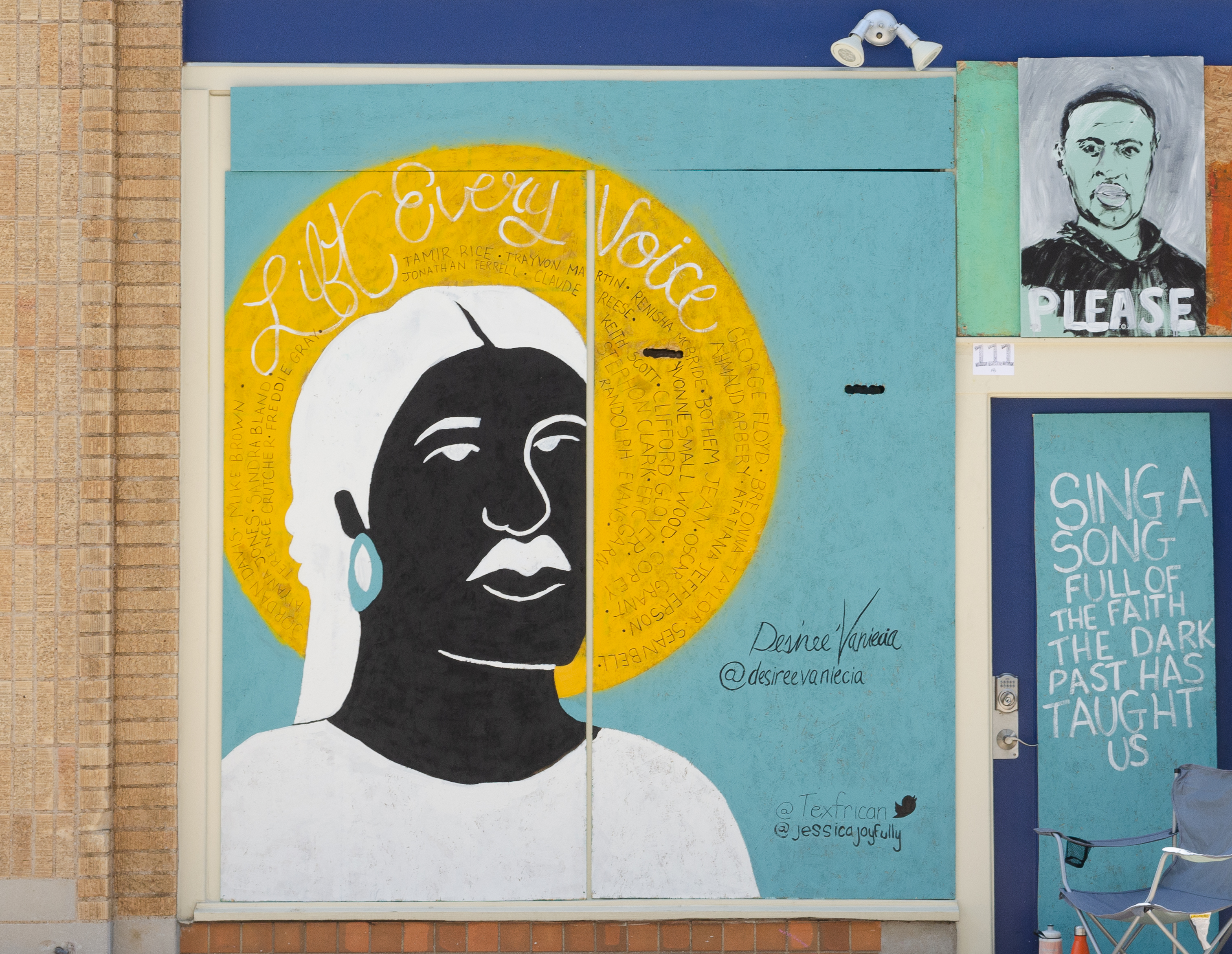 “Just thinking about it now, it makes me sad,” Vaniecia said. “Because we couldn’t even fit all the names inside of the halo.” 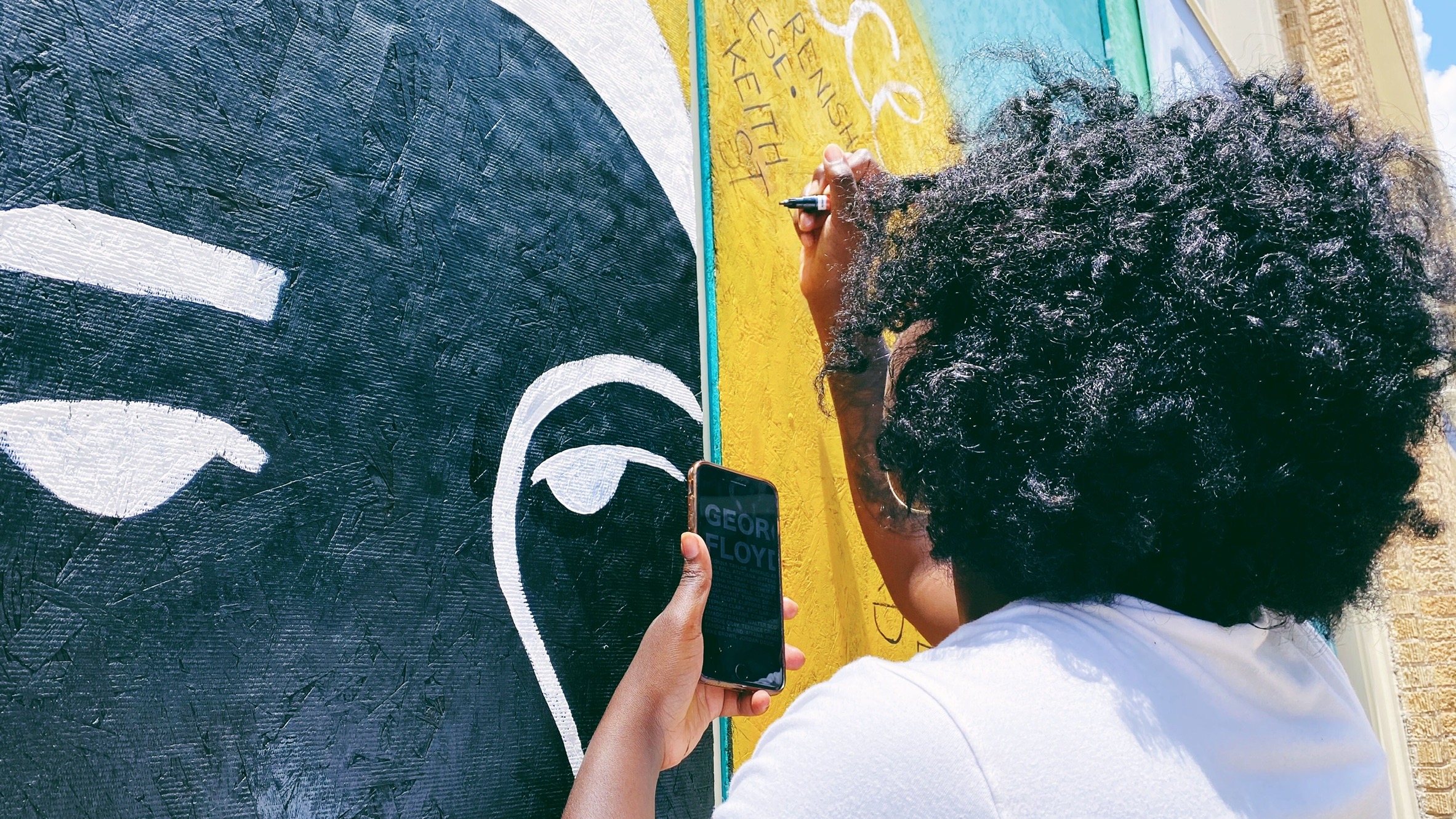 “I have to do something because I want my students to see that you can make positive change and you can spark a movement even if you can’t protest,” said Vaniecia. “That really motivated me to keep doing stuff and keep speaking on it.” 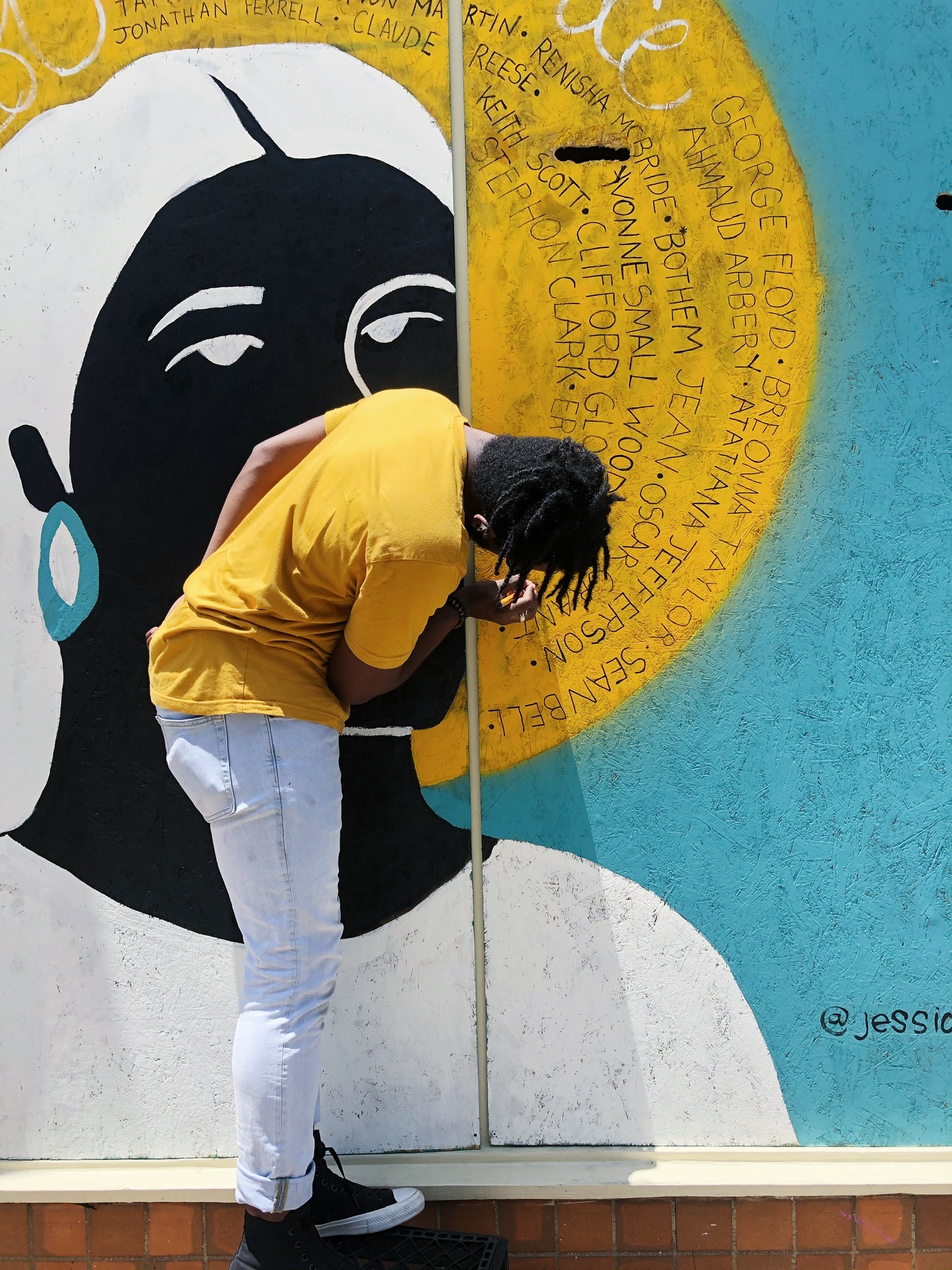 Joeneal Berry writes the names of victims of police brutality on the mural. Image courtesy of Desiree Vaniecia.

“I teach middle school kids and I want them to be able to become young adults and be productive people of society,” said Vaniecia. “In order for them to be that, they have to see people of color as their equals. And you have to love everyone just like you would like to be loved.” 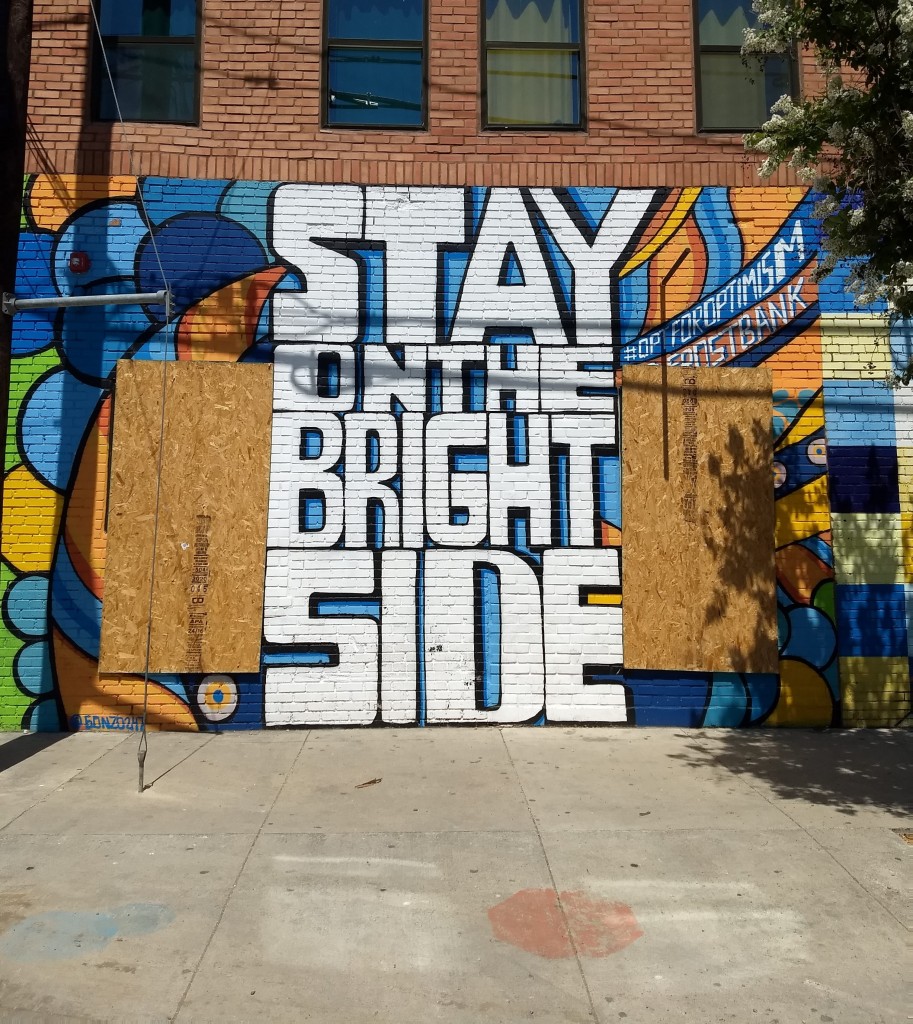 Each street in Deep Ellum is lined with colorful, bold mural art from different artists that catch the eye with striking portraits of victims like George Floyd mixed with positive messages like, “Stay on the bright side.” and “Deep Ellum UNITY.” 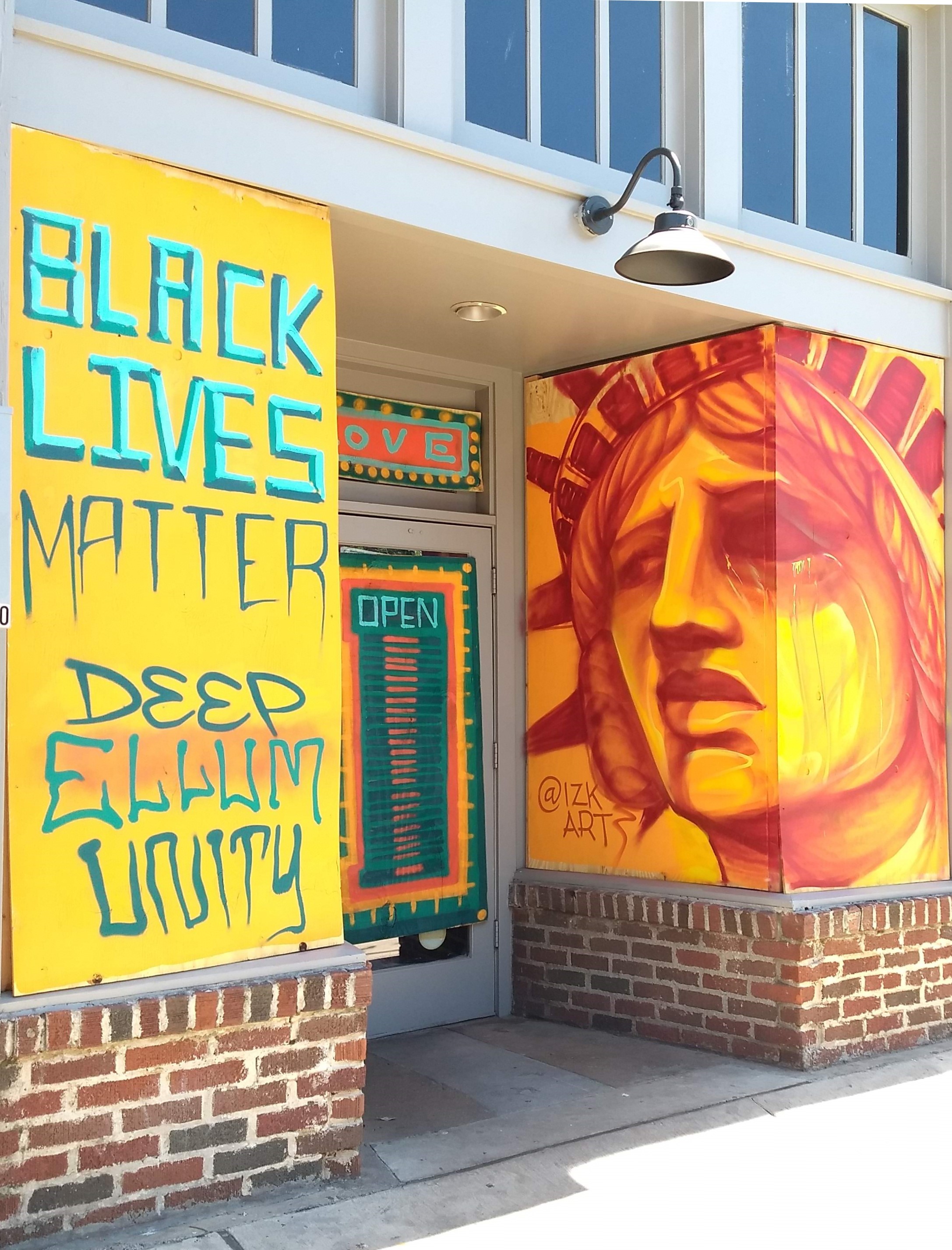 These works of art may look very different, but they’re all saying the same message. A message of equality and hope for change. 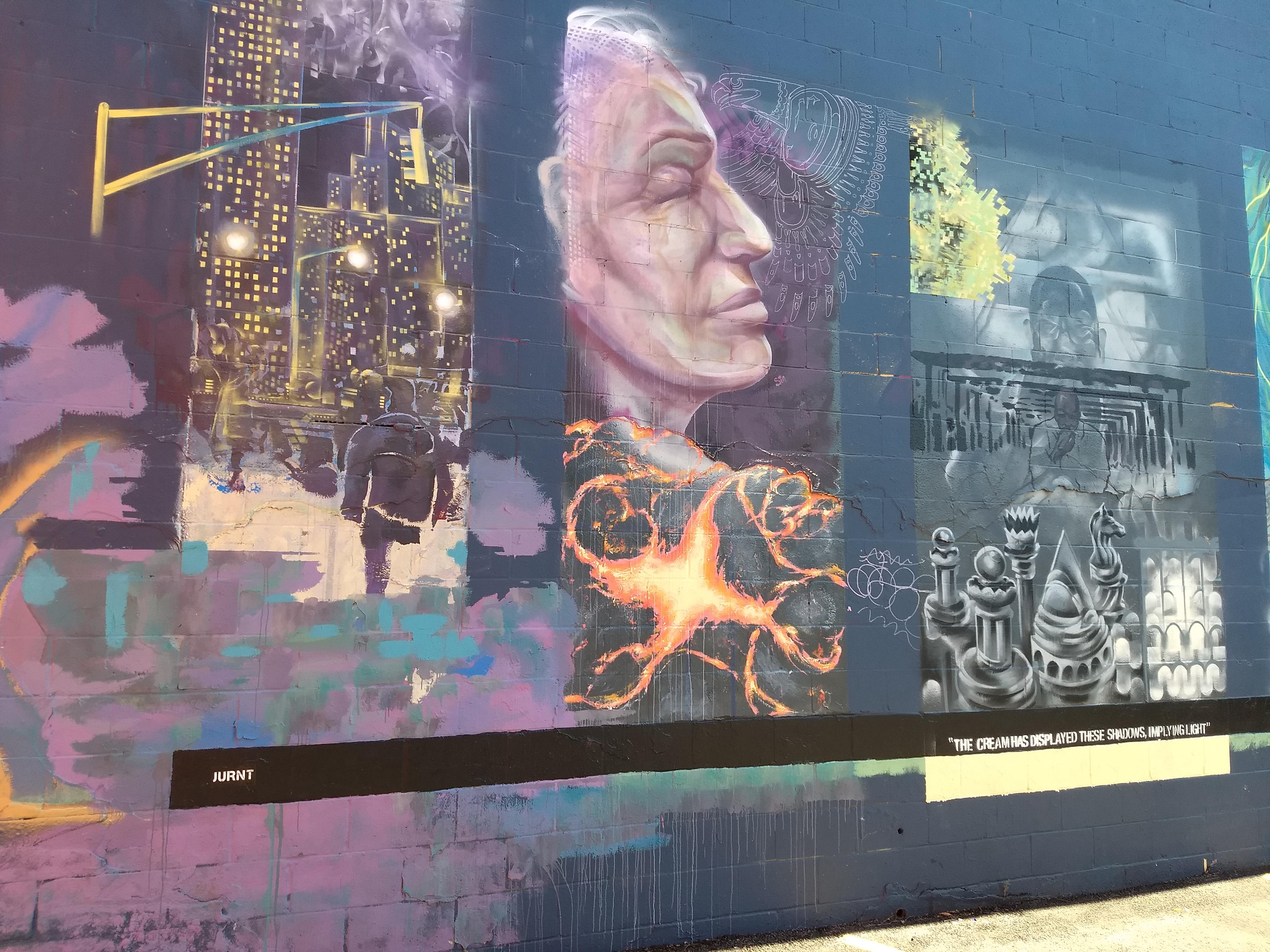 Photo by Preston Kelly. “JURNT, The cream has displayed these shadows, implying light.” Mural by an unknown artist.

When asked about the feedback she got about her mural, Vaniecia said, “I had a Hispanic woman reach out to me about my art and say, ‘I just didn’t know it was so many.’ And the sad part is that that’s not all of them. That’s not all the victims of police brutality. We don’t even know some of their names.” 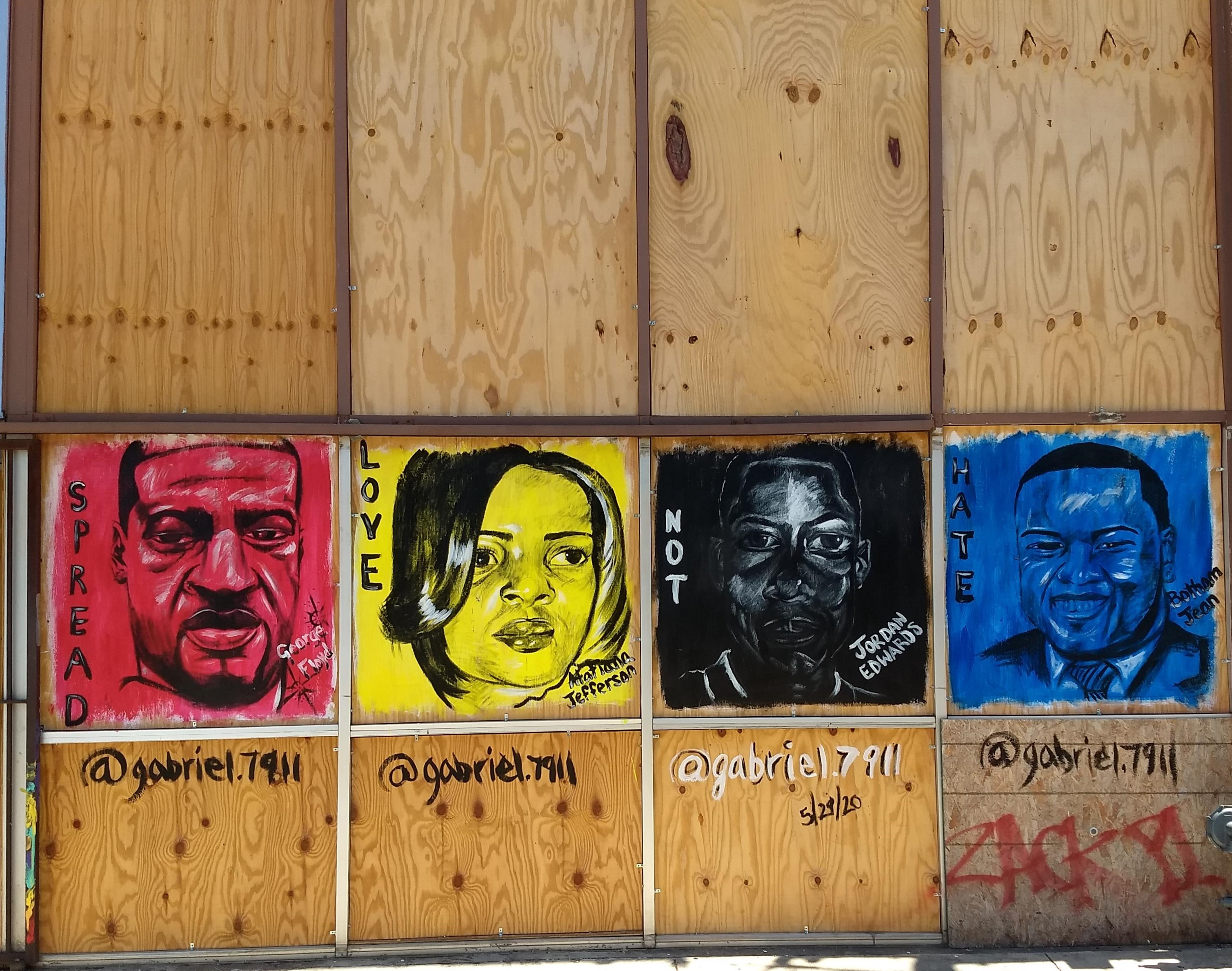 “Art is important because it’s a form of expression. And it’s something to really memorialize the time and the feelings that you had at that moment,” Vaniecia said. 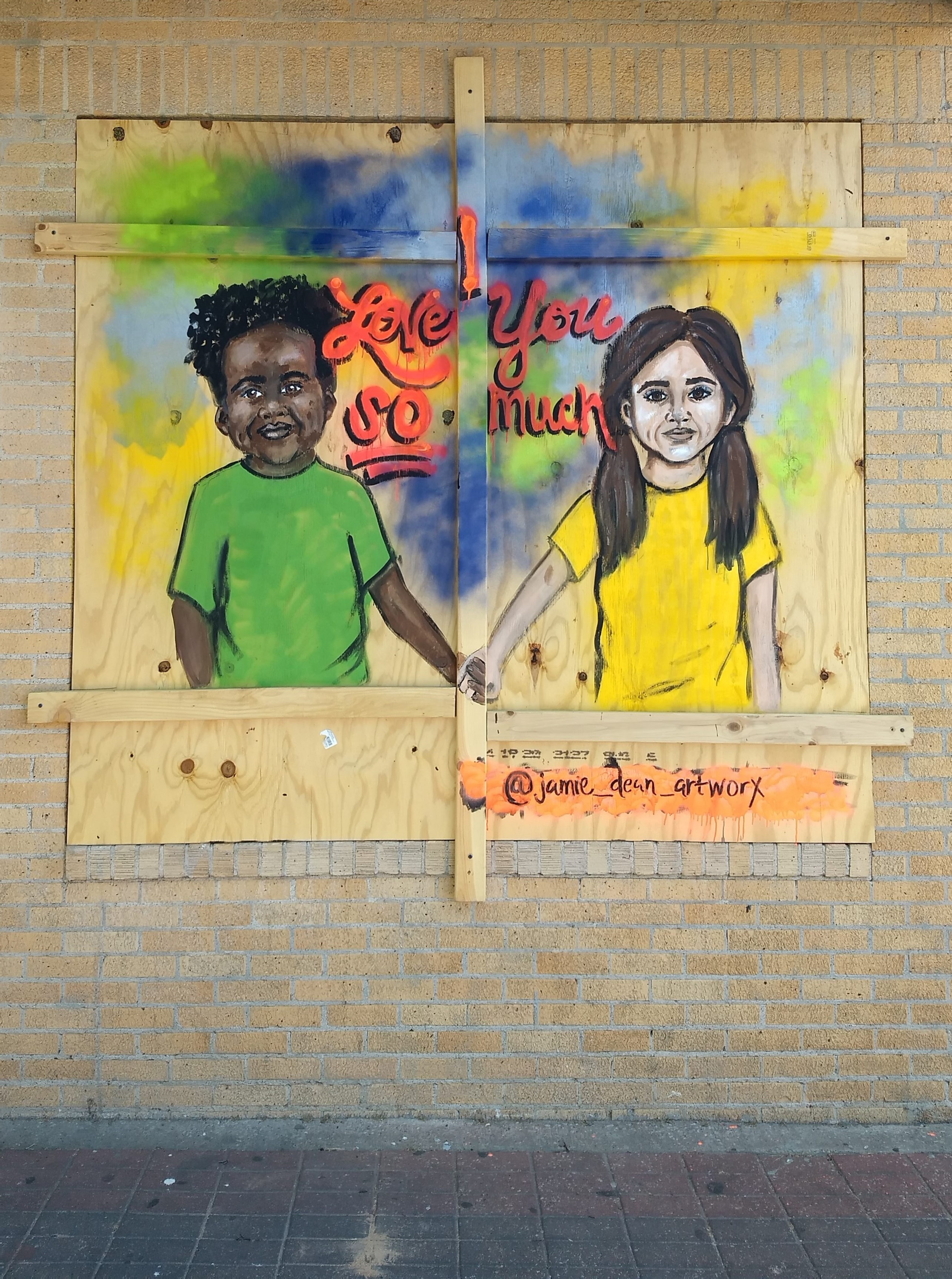 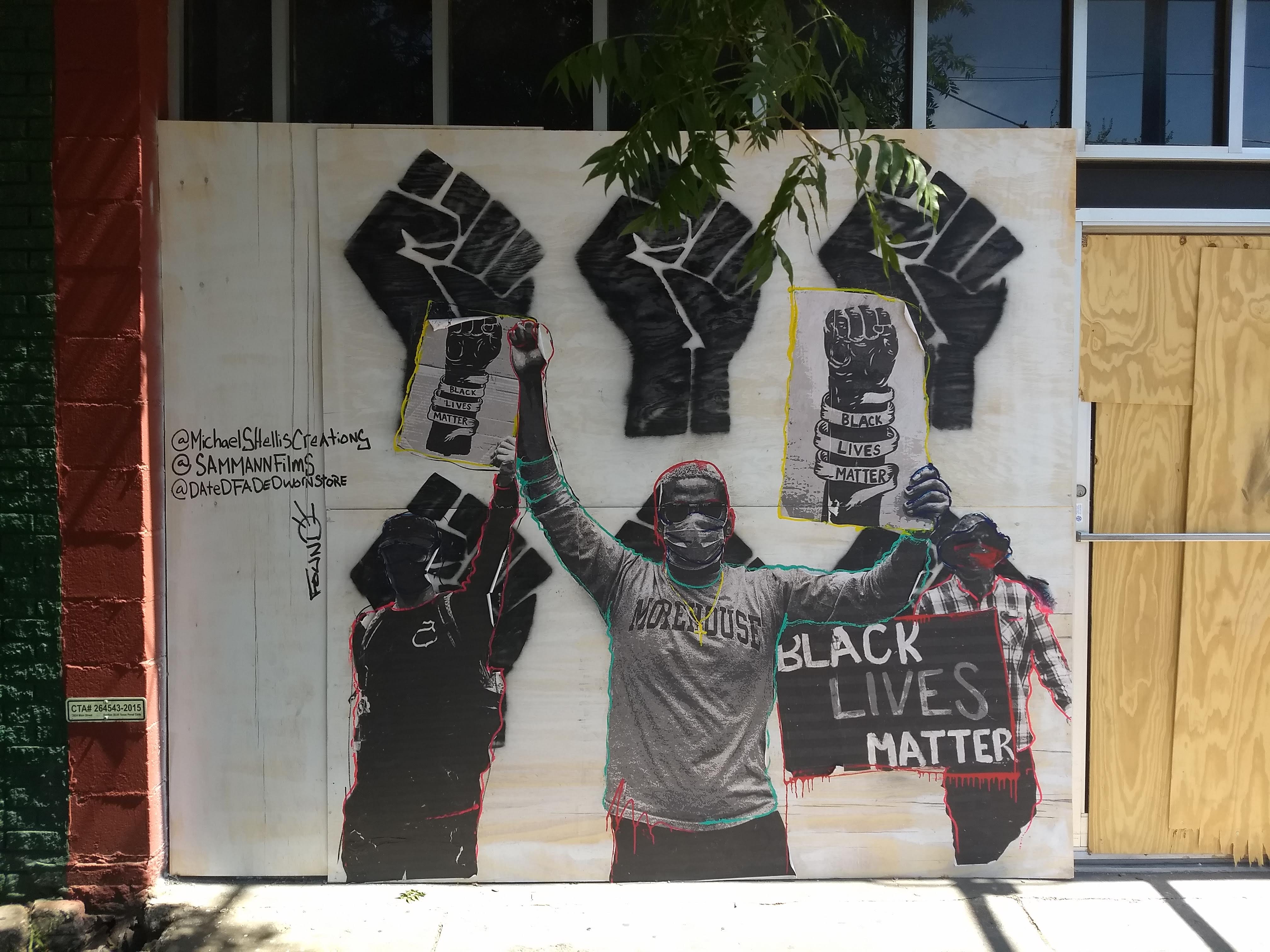 “Art is to connect with people. A lot of people aren’t artistic, but when they see something, a painting, that’s talking about this time we’re living in, they resonate with it,” said Vaniecia. “I think that’s really important. To keep moving things forward and to have that in people’s faces” 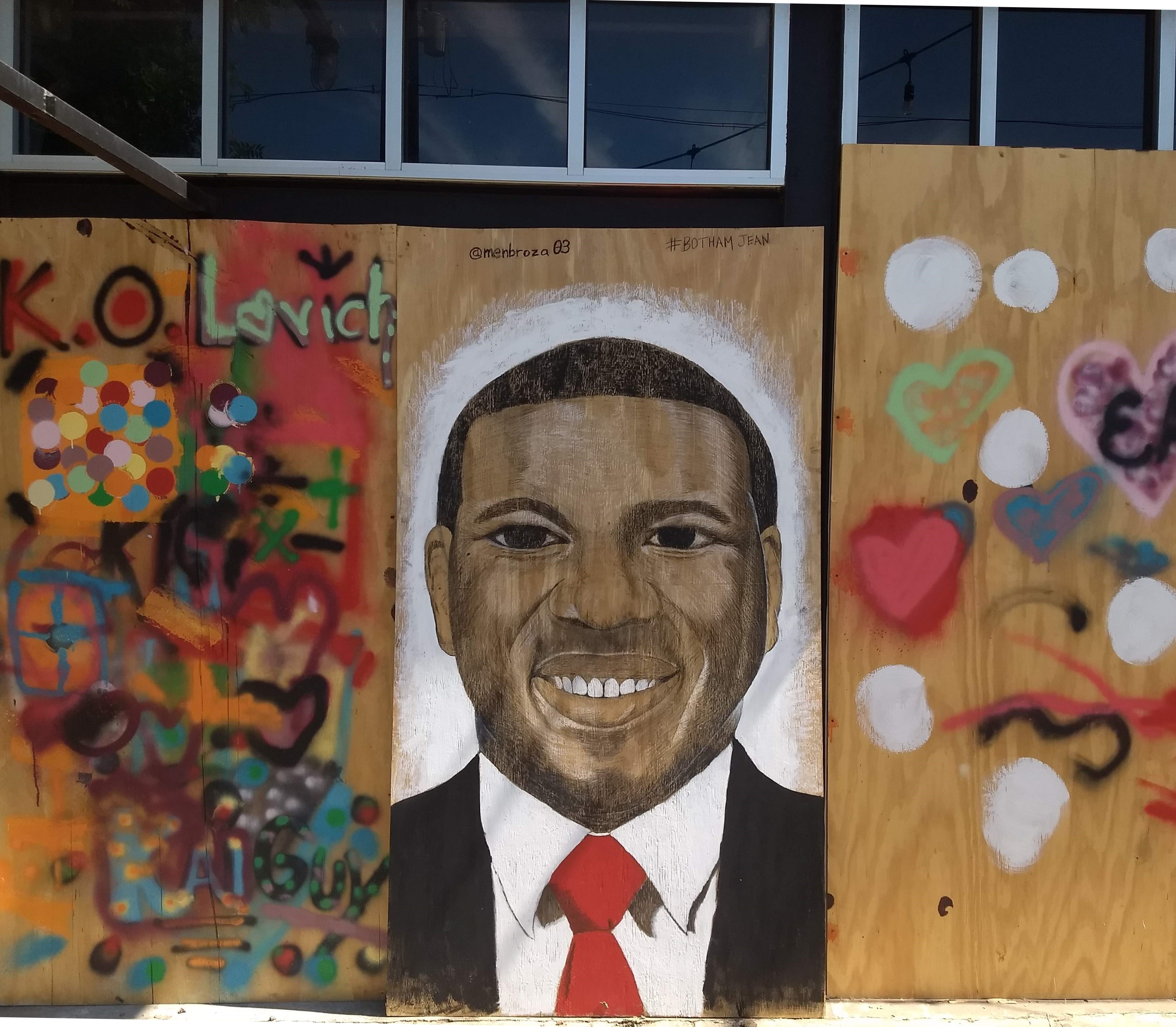 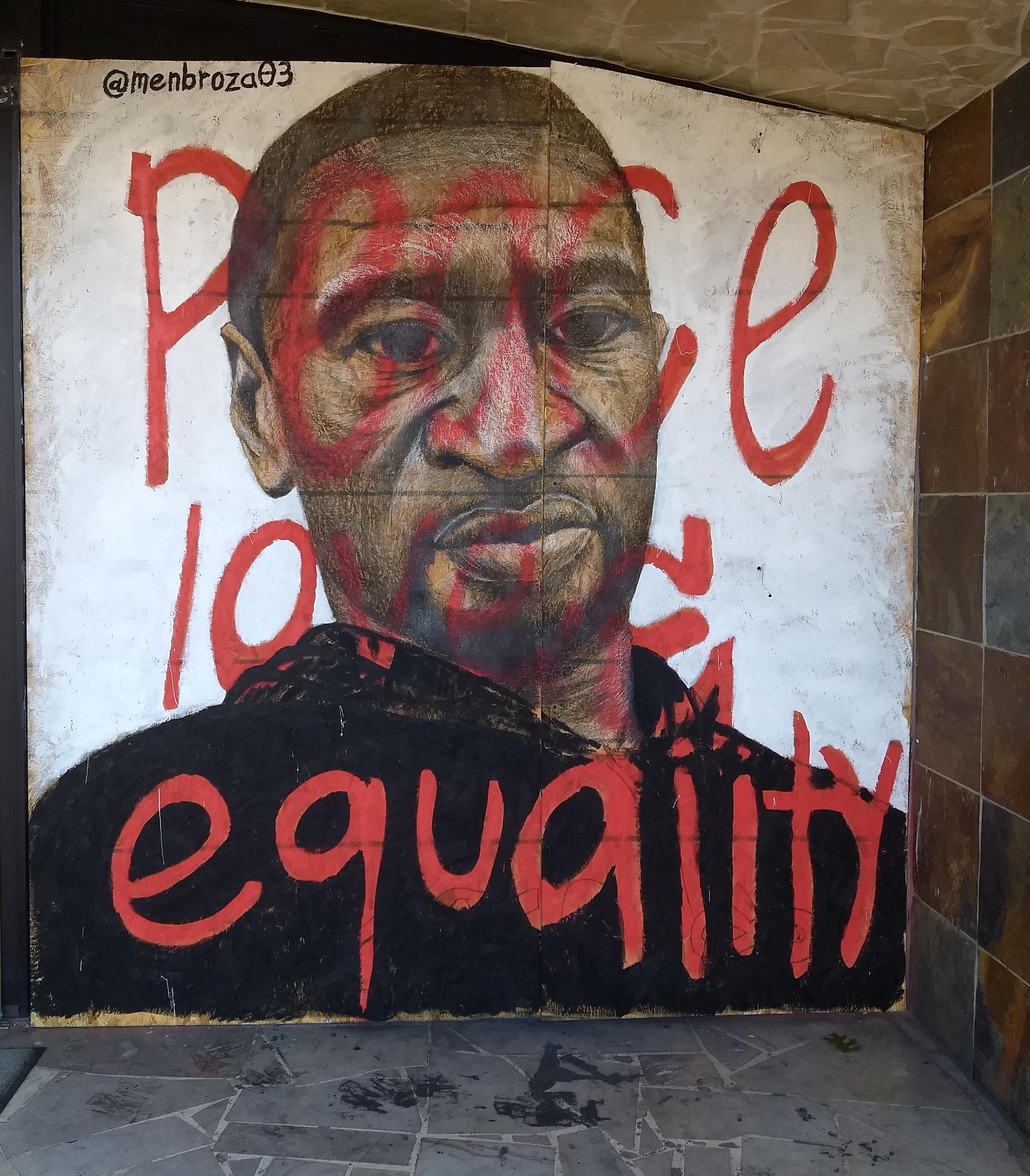 “Don’t stop. Don’t let up. I won’t stop and I won’t let up because I want this world to be a better place for my son and all my little cousins,” said Vaniecia. 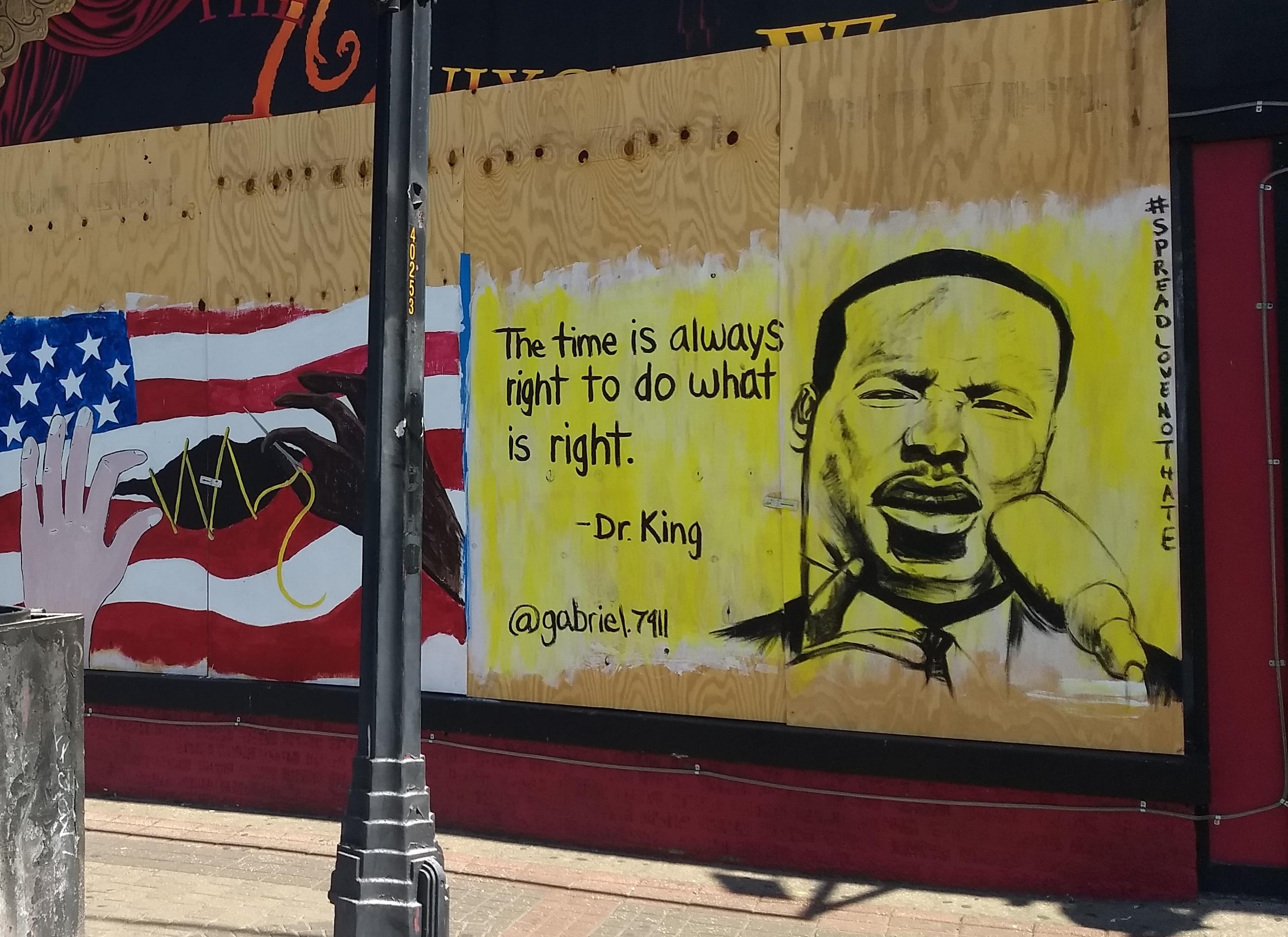 Deep Ellum is filled with creative artists, designers and performers, so it’s no surprise that it is now the “walking art gallery” for the man in the street here in Dallas, public and free. Each alleyway and storefront is now a sign of these strange, chaotic times: boarded up but not silenced. 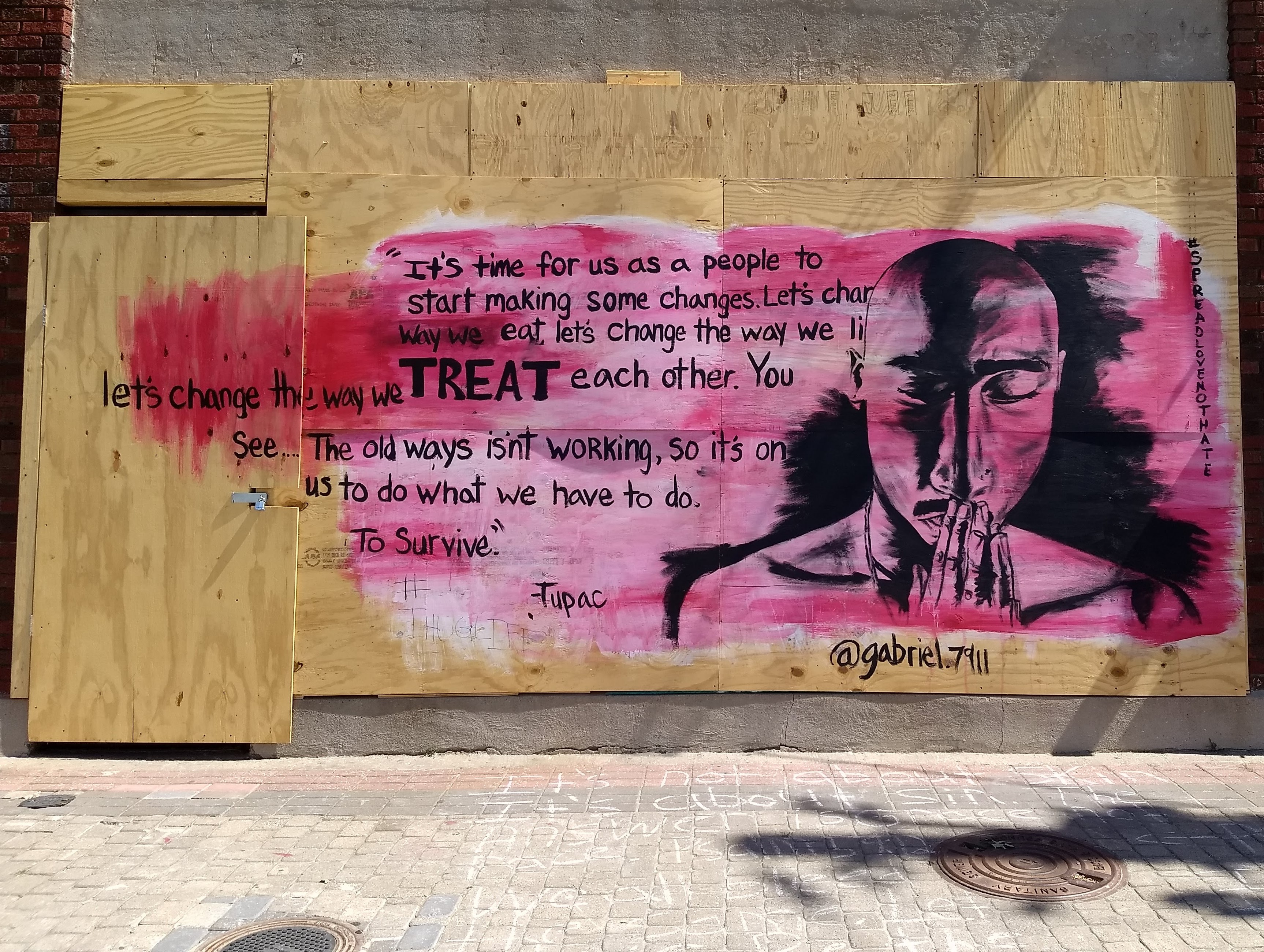