Skip Navigation
Home > ArtandSeek.net > She May Be The Spookiest Woman On TV Right Now

It’s not like Dallas performer Gail Cronauer hasn’t played haunting characters before this.

You can catch The Vast of Night on Amazon Prime.

She was hilarious and creepy as the classic Russian folk sorceress, Baba Yaga, in the Undermain Theatre’s The Fairytale Lives of Rusian Girls. In fact, Cronauer has the lengthy resumé of a classic character actor, playing all sorts of nook-and-cranny roles, adding texture to a cast: She slapped Dennis Hopper in Carried Away. Tim Roth killed her in Murder in the Heartland. She’s appeared in not one but two Walking Tall sequels.

But rarely has she had a spellbinding scene the way she does in the current Amazon Prime indie sci-fi flick, The Vast of Night.  She plays Mabel Blanche, an elderly shut-in who, towards the end of the film, winds up explaining what the heck has been going on in this beautifully crafted, self-conscious throwback to the cerebral, lo-fi suspense of The Twilight Zone – back when outer space still carried a sense of awe and mystery, and we were just beginning to learn how many flying saucers have used New Mexico for a parking lot.

The Vast of Night follows two teenagers in late ’50s New Mexico, a wannabe hipster DJ named Everett (Jake Horowitz) and the feisty, geeky, switchboard operator, Faye (Sierra McCormick). On this particular evening, while the rest of the small town jams themselves into the local high school basketball game, the two encounter an eerie, disturbing sound. Then come sporadic phone calls into both the station and the switchboard about something happening, something in the sky.

On-air, Jake asks his radio audience if anyone can help. And Mabel calls in.

The Vast of Night was shot in 17 days in 2016, in and around Hillsboro and Whitney, Texas, for significantly less than a million dollars. Director Andrew Patterson is a self-taught filmmaker from Oklahoma making his debut (also as co-writer and co-producer). But he’s said he spent six months just casting the film, trying to get it right. He told the website, Coming Soon, “I didn’t know Gail before the movie. She came in through an open call and just crushed the audition and pretty much had it before she walked out of the room.” 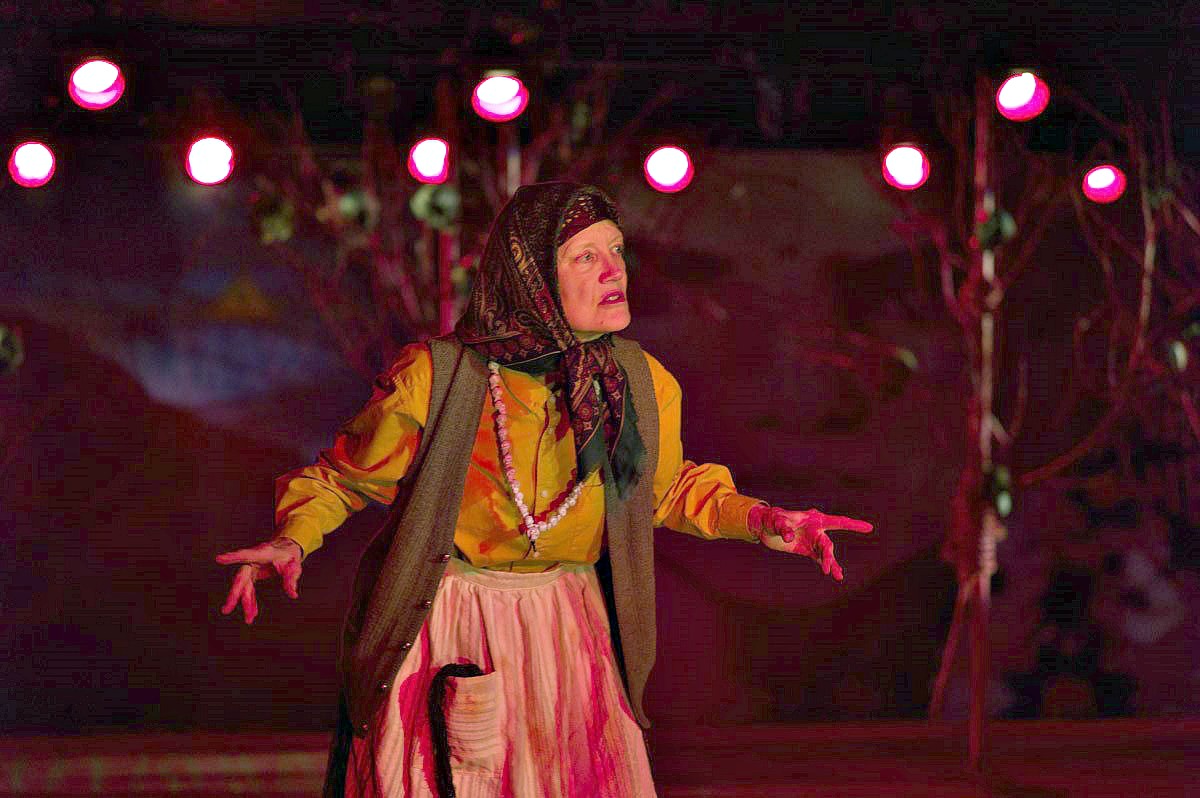 Gail Cronauer as the witch Baba Yaga in the Undermain’s “The Fairytale Lives of Russian Girls.”

In fact, there are a number of North Texas actors peopling The Vast of Night — including Lynn Blackburn and Pam Dougherty. Also, some theatergoers may recognize New York actor Jake Horowitz, whose Romeo was one of the best things in the Dallas Theater Center’s Romeo and Juliet, directed by Joel Ferrell.

Cronauer said Patterson shot her entire sequence as Mabel in one day — she was on-set for only two. In addition to being a loving hommage to 1950s, B-movie classics like The Thing from Another World or The Day the Earth Stood Still, Patterson’s film stands out as a smart, low-budget, indie production that takes advantage of its limited resources to create something more subtle than a nostalgic pastiche. It concentrates on the roving action of the characters and the (not-so-simple) characters themselves, while also lavishing attention on the Spielbergian atmosphere and storytelling. The movie’s zooming, POV tracking shots, for instance, are already getting famous.

So did the talented director of photography M. I. Littin-Menz use drones or stedicams?

Vast is one of the rare movies of any kind that trusts the power of actors with a story to tell – a story about escaping small towns, about the hovering questions technology might bring, about our little place in this vast universe.

As Patterson told Coming Soon, “Stage plays, radio dramas — particularly in the 30’s and 40’s — and the heyday before television, were the biggest influences on this film. . . . I wanted something that if you stripped it down and put it on a stage and had a switchboard on the left side of the stage and a radio station set on the right side of the stage and then you break and you have a quick intermission, you come back and then it’s an old age living room in the middle of the stage. I thought this would translate into something like that. And that is why this movie resembles and feels like other mediums, because I’ve always thought that great storytelling transcends its format.”

Cronauer agreed: “If you only had the score [by Erick Alexander and Jared Bulmer] and the words of the characters to listen to, I think it could stand on its own.”

Not to discount the atmospheric visuals, but this reliance on sound and storytelling may explain why reviewers have been rapturous about the film, while general audiences have been more “Meh.” On Rotten Tomatoes, critics gave the movie a 92% ovation (it “suggests great things for debuting director Andrew Patterson”). Meanwhile, ordinary viewers gave it 63%.

Genre fans may have been misled by the “sci-fi” label and have been expecting something more along the warp-speed lines of CGI action thrillers like The Guardians of the Galaxy or Ready Player One. Instead, Vast begins as a fairly chatty, low-key movie that eventually relies on several, hushed, tense sequences of just  . . . talk.

Talk needn’t kill cinematic suspense. Consider the dramatic phone call with a faceless, ominous voice. Or the escalating back-and-forth of an in-person interview: These are techniques Patterson has borrowed from such films as All The President’s Men and Zodiac.

So when Everett and Faye finally track down Mabel to her dark, secluded little house, Patterson has The Vast of Night more or less come to a complete stop. We sit and listen to Cronauer relate how Mabel’s life was up-ended, how she was blamed for that event — hence, her reclusiveness — and what she fears may be about to happen again, here, now. It’s a sign of Patterson’s writing and Cronauer’s performance that Mabel is both creepy and more than a little tragic.

One of the creepiest things about Cronauer’s scene is her delivery of a chanted set of mysterious, short phrases that help trigger the film’s final moments. Cronauer said that during one press interview with Patterson, he’d been asked what the words meant, what language they were in, and he directed the interviewer to her.

It turns out, four years ago, Cronauer devised those lines herself. On set. In sci-fi circles, the phrases could become as tantalizing and famous as the order given to the giant robot Gort in 1951’s The Day the Earth Stood Still: “Gort klaatu barada nikto.”

Cronauer insisted that the words are not Spanish nor are they from any Native Indian language — which would be logical deductions, given the New Mexican setting. Cronauer said the words haven’t been “backwards masked,” either — reversed, as in the ’60s and ’70s fad in pop music recordings for leaving spacey “clues” for fans to find. She pointed out that’s why she was asked to improvise something in the first place; the filmmakers didn’t want to spend the money and time on post-production audio effects.

Cronauer said she doesn’t remember exactly what she came up with — or she was being coy about not telling — but she said they are in English and can be made out in the film. I’m not so sure. Here’s Cronauer speaking the words in the film and then I’ve reversed them (which makes it plain that the words don’t make sense backwards).

“My recollection is that I kind of made them up,” Cronauer said. “And I wrote it down on a piece of paper so I could read it consistently from take to take. And when I left the set, I left it on the set. Because that’s what you do as an actor, you leave the prop on the set.”

That question about the words and their meaning that the interviewer asked eventually made its way to Cronauer: “I didn’t want to say anything about this that Andrew wouldn’t approve of because he’s very protective of his work. So I said, ‘Andrew, this is what I’m thinking about saying to this women, and if this is OK, I will.’

“So I said, ‘I was inspired to write these words down. And when it was over, I left the words on the set. And I said,” — Cronauer added, laughing — “‘I would be very careful about speaking those words out loud because you saw what happened in the movie.’