The annual fight to wrangle a working city budget in Dallas is over. The Council approved the plan last week. Throughout the process, arts

Krys Boyd and her guests will discuss cultural equity today at noon on Think.

groups serving African-American and Latinos audiences argued and protested for more funding. Art&Seek’s Hady Mawajdeh reports on why these groups are fighting for what’s known as cultural equity.

The fight began with what protesters called a bailout for one of the city’s largest arts organizations – the AT&T Preforming Arts Center. When opponents found out the Center needed $15 million dollars from the city over the next 10 years, they were not happy. Leaders from small and medium-sized arts groups began mobilizing opposition. They even rallied at city hall. 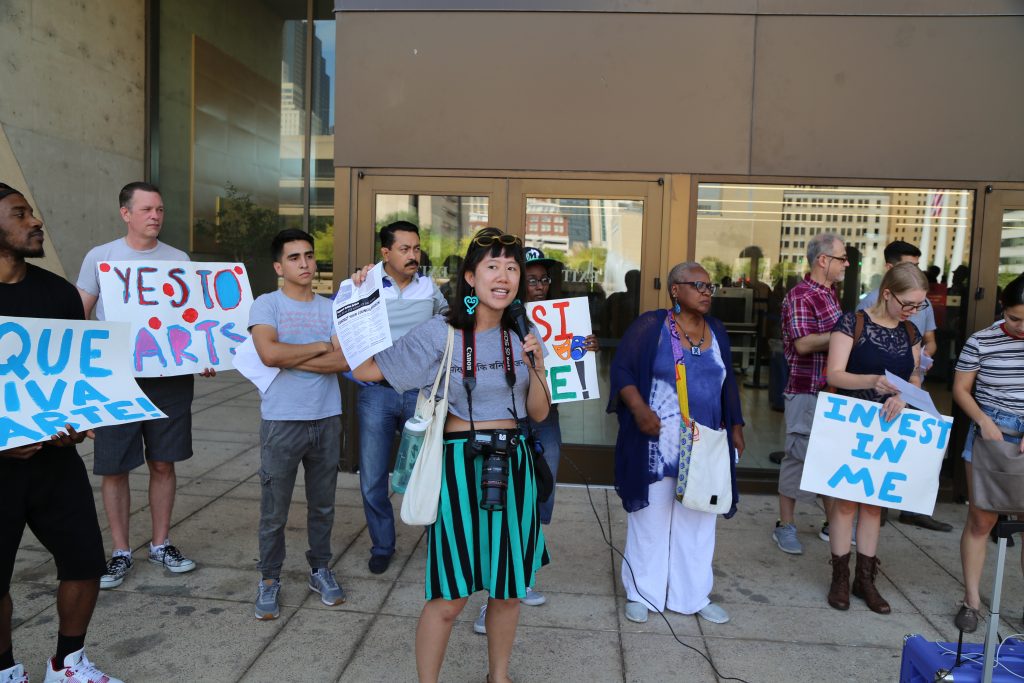 trans.lation’s Carol Zou was an organizer of the Arts Equity Now rally and spoke out about the city’s plan. Photos: Hady Mawajdeh

According to Doug Curtis, the president and CEO of the Performing Arts Center, the Center  was $151 million in debt. But they recently paid about a third of the debt — making the most recent balance $95 million. The debtors, Bank of American and J.P. Morgan Chase have agreed to forgive another third. And the Center is confident it can raise $35 million from donors. Here’s where the city funds come into play: the Center needs the city of Dallas to pitch in the last 10 percent.

Small arts groups that serve African-American, Latinos and other minority audiences say that doing so is unfair. Carol Zou of Vickery Meadow’s trans.lation, says “If I mismanage my budget then basically we don’t exist anymore. We don’t get a bailout.”

Despite efforts to stop the city from helping AT&T PAC with its debt the council passed the budget and the Center will get it’s $15 million spread out over the next decade. Chris Heinbaugh, the Vice President of external affairs at the Center, says the money gets them one step closer to providing better services to Dallas.

“It’s not a great situation, but once that’s retired, all those funds that have been going to pay for the debt, those will be able to be spent on more community programs,” says Heinbaugh.

Artists/activists like Zou and Cara Mia Theater Company’s David Lozano do not agree, but they don’t think they completely lost the battle. At the last minute, the council approved an additional $285,000 for “culturally specific arts groups” and $400,000 for facility repairs.

“Those are victories. They’re small victories, but I am glad that that took place,” says Lozano. “Also I’m really very happy that organizations will get to perform on the sixth floor at the Wylie.”

Lozano and others are also pleased that the issue of cultural equity in Dallas has been reinvigorated.

What Is Cultural Equity?

It means that all people, especially those who have been historically underrepresented based on race, ethnicity or gender, are represented in the arts. 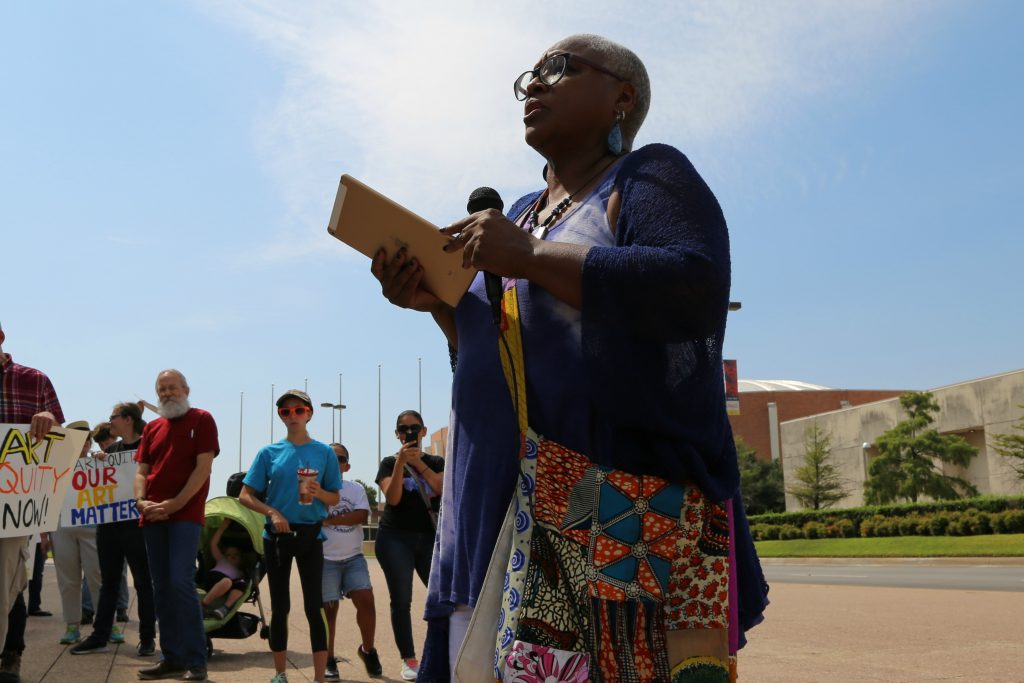 Vicki Meek talks about the need for cultural equity.

Now, this doesn’t just mean showing a painting by an artist of color or performing a play from a minority playwright from time to time. It means bringing people of color into boardrooms and curatorial roles. It means thinking about audiences of color and it means funding artists. Which is something Vicki Meek – the former manager of the South Dallas Cultural Center, writer for Theater Jones and activist – doesn’t think the city does enough of.

“The fact is we are still woefully under served,” says Meek. “I think that’s where the disconnect comes when we start talking about cultural equity or racial equity in the arts we are talking about having equitable dollars allocated to those arts organizations and artists that doing this work that is specifically geared towards those communities.”

“The importance of having cultural representation in theaters is that plays represent, and more than represent, they speak to the experience of the people watching them,” says Lozano. 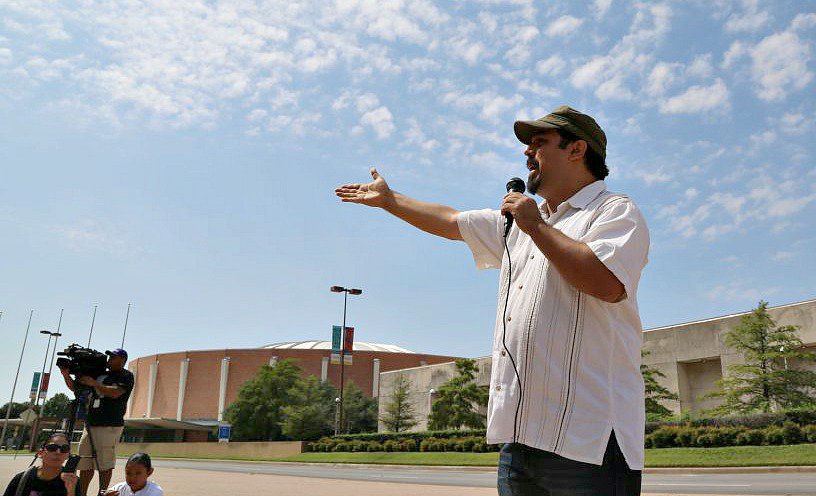 That’s why he fought against the helping the Preforming Arts Center. He says he wasn’t trying to take down the big guy. He’s fighting for cultural equity.

“I think that theater at its best approaches an experience of ceremony and that’s what the great tragedies were about. That’s what Shakespeare’s about. And that’s important for a people,” says Lozano.

What Role Does The City Play In Cultural Equity?

The city gives money to the arts through the Office of Cultural Affairs. The OCA uses most of that money to take care of buildings. It manages 23 cultural venues, including the large ones like the Dallas Museum of Art, AT&T PAC and the Kalita Humphreys Theater. Those large buildings eat about 75 percent of the OCA’s annual budget.

That 75 percent going to large cultural venues worries Vicki Meek,  because those buildings house organizations that are run by mostly white boards and seem to serve mostly white audiences. In fact, all of Dallas’ powerful arts boards are grappling with diversity. This is especially troublesome to Meek, because Latinos, African Americans and Asians make up such a large part of the population.

“We should be able to expect that our taxes dollars can be spent on those things that are important to us as well as the people who are white,” says Meek.

The director of the OCA – Jennifer Scripps – is aware that the board rooms of large arts organizations don’t reflect the city of Dallas. She says she’s not comfortable with it either.

“People know now that diverse teams are healthier,” says Scripps “I think that when boards start to have those honest conversations, it will make the institution better for it.”

But she says her priority should be revisiting the city’s cultural policy, which was written in 2002.

“Our city has changed dramatically since 2002. So we are long overdue for a holistic revision of that and other cities across the country have been doing this for the past three to five years, so Dallas needs to play catch up,” says Scripps.

The city’s cultural policy was created to ensure that all  Dallas citizens and visitors have an opportunity to experience the finest in arts and culture. It proves guidelines for how the OCA should award grants, run cultural centers and balance the needs of small and large institutions. Scripps says new policy could do more to incentivize diversity. She thinks they could add perks to organizations for hiring diverse staffs and for bringing people of color into the boardrooms. But she says that cannot be done until the cultural policy is revisited.

Revisiting the policy worries Vicki Meek and others. They believe that hard-fought ground could be lost. Scripps says she’s not trying to reinvent the wheel though. She says she knows there needs to be lots of dialogue with community to make the plan work for everyone. She hopes that her transparency throughout this process proves to some of the artists/activists that she’s wants to make the OCA available to them.

“I don’t think that the OCA is fundamentally broken,” says Scripps. “I think we can go from being a B-plus to an A-plus.”

Artists say that until the issue of cultural equity is addressed, the office of cultural affairs will never raise its grade.

For more information on what arts groups are doing check out Zou’s Michelada Think Tank and Meek’s dallasartsequity.com.