‘Clay Between Two Seas’ is a world-premiere exhibition of Mexican clay pottery, the celebrated kind known as Talavera. The show traces the origins and styles of the ceramic art, and the show just opened at the Crow Museum of Asian Art. Whichled local All Things Considered host Justin Martin to sit down with Art & Seek’s Jerome Weeks to ask – why there?

Justin: Jerome, I think anyone who hears about ‘Clay Between Two Seas’ will wonder why a show about Mexican pottery is at the Crow Collection of Asian Art?

JW
‘Clay Between Two Seas’ at the Crow Collection of Art through Feb. 12th.

Of course. And my answer is going to be appropriately roundabout because this is a show about ceramic art. But it’s also about history, technology and trade routes. So we’ll start with this. What is this?

That’s the bottom of a planter.

JW Yep. It’s made of unglazed pottery – or terra-cotta, Italian for, literally, ‘cooked clay’ or ‘baked earth.’ This stuff is almost as old as civilization itself — really. As soon as we could build kilns that got hot enough, humans started making bowls and bricks and tiles from this. It’s porous, though – meaning it absorbs water, so you can’t cook with it. And it breaks easily enough.
So now what’s this?

JW Yes. It’s one of our highly desirable KERA coffee mugs — made of porcelain.

JW Which means it’s made from finer clay than the terra-cotta, and it’s fired at hotter temperatures and, most importantly, it’s glazed. That hard, shiny surface makes the pottery non-porous, it can hold your hot coffee. You can microwave it. That white glaze technique may have been developed in both the Middle East and China around the 7th or 8th century. Historians still debate whether these were independent discoveries or the result of trade between the two.

China? – I think I can see where this is going.

JW. Exactly. Wherever the white glaze actually originated, it became very popular in both China and the Middle East. It was hard and clean. And it was like a blank canvas for artists to work wonders with. Colors showed up brighter and richer on it.

I’m looking at it, and it’s not really white, is it?

JWNo, it’s not, there’s typically just a touch of blueish grey. It’s made using tin. But the other reason this tin white glaze became popular, interestingly enough, is that it was cheaper than importing bone china from Asia, which uses the finest clay and can be made very thin, very delicate. It was a luxury item.

At any rate, the Moors – meaning, basically, the Muslims of North Africa – invaded Spain in 711 AD. And they brought all this ceramic technology and art with them. And Europe went nuts for it. That transcontinental trade and the European love for this pottery is a chief reason we, in English, even now, centuries later, still call all kinds of plates and dishes ‘our good china’ or even ‘bone china.’ “Bone china” just refers to the way it looks unglazed — there are no bones used in its manufacture. But both terms have become just generic labels for ‘high-class dinnerware.’

But because of this burgeoning demand, the Spanish developed their own factories — they even imported Dutch potters to teach them Italian Renaissance methods and styles. And naturally, when the Spanish conquistadores colonized the New World in the 16th century, they brought this pottery in their galleons with them.

And a perfect result of this trans-Atlantic trade is in the show. It’s a high-quality, tin-glazed earthenware vase from Mexico, the kind called Talavera — which, by the way, is officially known as Talavera Poblana, meaning it’s from the city of Puebla, which was a way of distinguishing it from the original potteries in Talavera de la Reina — in Spain.

But it looks Chinese – it looks like a Ming vase.

JW. Precisely. That white glaze and the dark blue patterns are directly descended from Chinese originals. And you see the lines of trim along the bottom and top. What do they look like?

JW. So here is a Mexican vase from the 17th century that uses Chinese and Egyptian ceramic technology, and it displays traditional Arabic and Chinese designs. What you’re seeing in this single work of Mexican pottery is a complex interplay of geopolitics, cultural influences, artistic choices, technological advances, imperial expansion and economic demand. 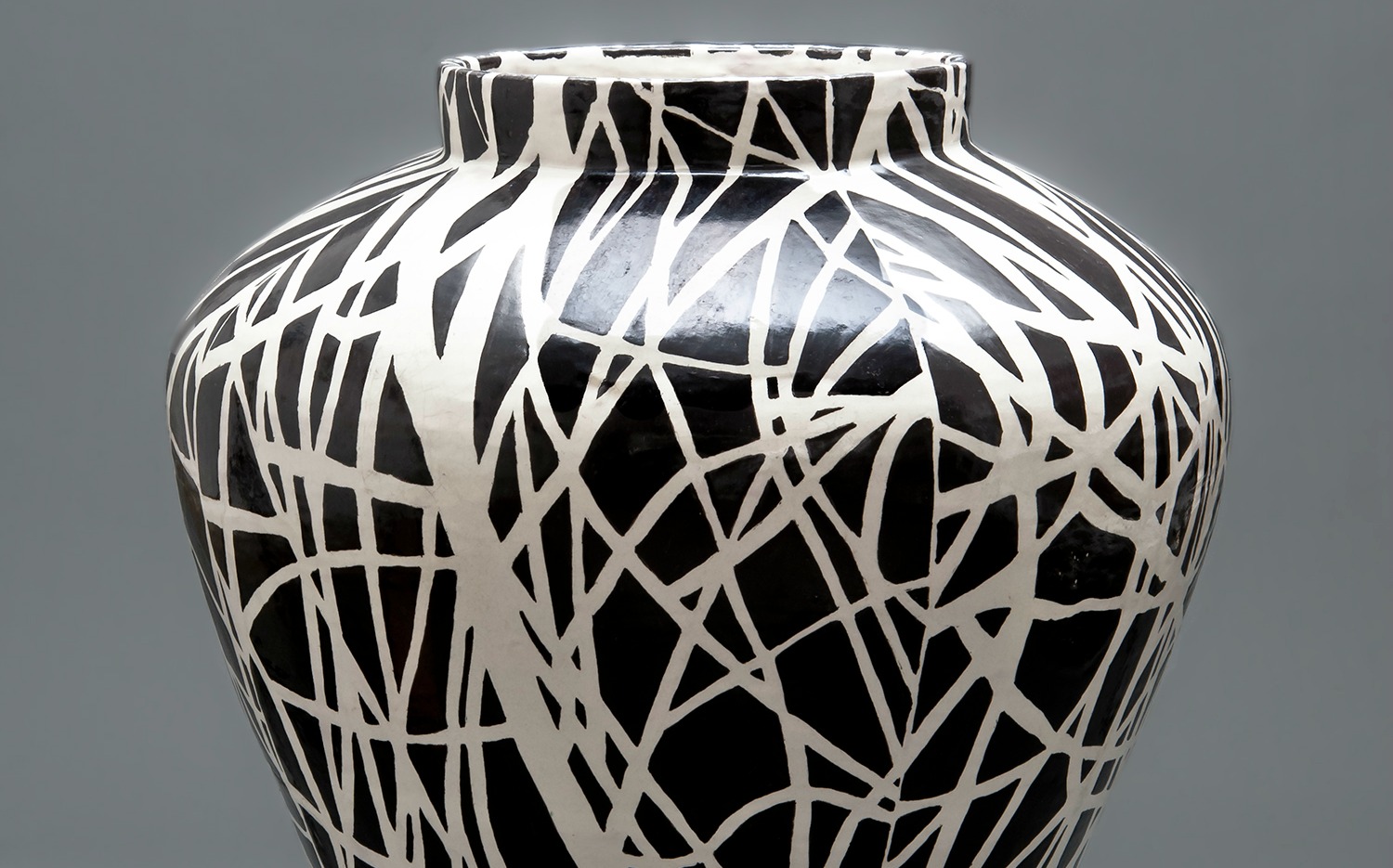 JW All thanks to the Spanish empire. But here’s the extra link I knew nothing about. The trade was truly global. It went the other way as well.

JW Spain eventually colonized the Phillipines, giving the Spanish direct access to China. So they brought fine Chinese pottery straight back to ‘New Spain’ – across the Pacific. Hence, the show’s title: ‘Clay Between Two Seas.’ Mexican pottery grew from both Spain and China – and it blossomed,  becoming a traditional, highly prized Mexican art. You can see Baroque churches from the 18th century all across Mexico covered with glazed ceramic tiles.

how is the exhibition itself?

JWWell, the weakness of the Crow Museum has always been its small galleries. For a sizable, world-premiere exhibition like this – there are 120 items – it has to be broken up into several rooms. But oddly, that fragmentation kind of works to the show’s benefit.

‘Clay Between Two Seas’ is about historic, international trade between continents, across oceans – so you have to walk from one room to another, even one floor to another – and you see these influences follow you along, down through the centuries, across countries. The exhibition does a very effective job at keeping you ‘positioned’ — knowing where this artwork is from, what influences it shows, etc.

I must confess that traditional Chinese ceramics and Mexican Baroque art are not strong personal preferences of mine. I’m enough of a modernist with spare, minimalist tastes to find the aesthetic of splendor-through-more-decoration often feels cluttered. So it was a pleasant surprise to come across a stunning, all-blue Chinese vase (below), and at the end to find to some truly striking examples of contemporary Mexican ceramic art (above). 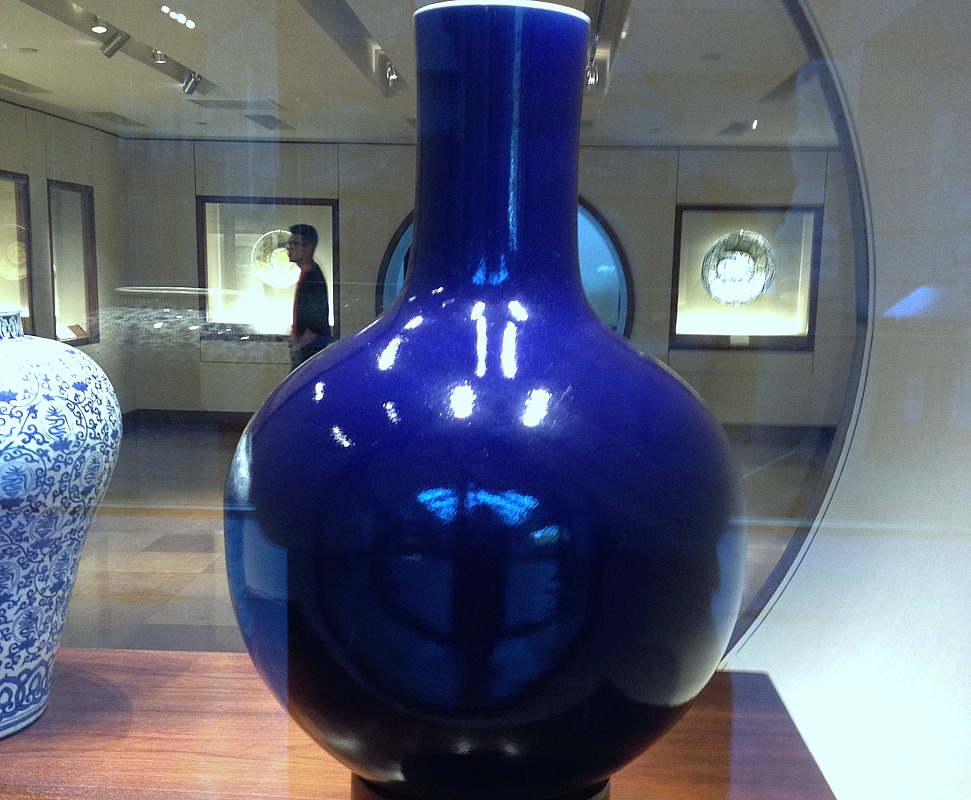