Iconic landmarks Pioneer Tower and the Will Rogers Memorial Center will be the backdrop for the premiere of new Fort Worth public artworks and a large show of new media artwork later this summer.

First, the Fort Worth Public Art Program decided to kick off its 20th anniversary by commissioning two artists, one from Los Angeles and one from London, to create major installations on Pioneer Tower.

Then, a group of North Texas artists were selected to show off their light and sound art on the walls of Will Rogers Memorial Center. That exhibition is called “New Stories: New Futures” and it’s presented by The Art Council of Fort Worth and the public arts organization, AURORA. While the exhibition and public artwork display is free to the public, attendees must register for a specific 30 minute time slot.

Here’s a little more about the new public artworks and the exhibition. 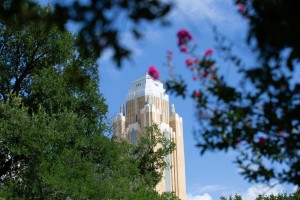 The Pioneer Tower installations feature new media artists Quayola and Refik Anadol, whose audiovisual installations will be projected on all four sides of Pioneer Tower. Both artists used artificial intelligence and data visualization technology to explore personal, historical, and environmental perspectives of Fort Worth. For his piece Pioneer Tower Dreams, Los Angeles-based artist Refik Anadol found archival photographs of Fort Worth and asked residents to send in photographs of their favorite memories of the city and ran all of them through artificial intelligence.

Martha Peters, Director of Public Art at the Arts Council of Fort Worth, said that the piece will start with a contact sheet of all the images and morph, showing the process of the photographs going through the computer program.

“We talked about this being a machine thinking about Fort Worth, learning about Fort Worth and then dreaming about it,” Peters said. “So [the audience] can expect some imagery they recognize as well as some stunning animated visuals that will delight anyone who sees them.”

London and Rome-based artist Quayola analyzed the natural landscape of Fort Worth in his piece Texas Surveys: New Pointillism, Landscape Scans and Horse Paintings, which visualizes data from sources like laser-scanned trees or motion-captured movement of horses. He used this data to create what he refers to as “computational” paintings of the landscape.

The Fort Worth Art Council choose Pioneer Tower after surveys showed it was one of four locations that people regularly gathered. A light-based project made the most sense for the Tower since it maintained the building historical and architectural integrity. 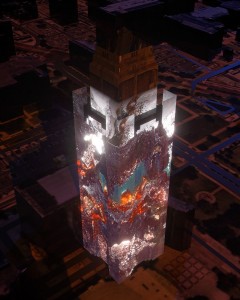 Anadol and Quayola visited Fort Worth to learn more about the city and get inspiration for their installations. While Anadol and Quayola’s works will only be on display for three days, Peters says the data and electrical connections built into the tower as part of this project opens up the possibility of commissioning new work for the tower in the future.

“For now, we’re focused on this first event and making it exciting for everyone, and hopefully also inspiring to our local artists with what other aspects of art they might want to look into or they might be inspired to try some new media work if they haven’t yet,” Peters said. “If they have, maybe they will be the next one commissioned for projection on the tower.”

“The Pioneer Tower project is all about the communities, and that is both Fort Worth and our region, being able to see themselves in the project,” Cross said. “That is the idea I wanted to recreate through the exhibition. It was how can I ensure that when people walk away from this they see themselves and the various experiences that relate across different types of identities, perspectives, and affiliations.” 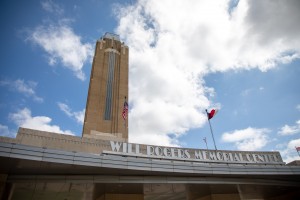 “Once you are in that space at 9 p.m. and you see those projections it is going to feel very dynamic,” Cross said. “All the artists are talking about aspects of either their own communities or communities they would like visitors to engage with, so it has really diverse conversations in one place.”

Cross hopes that everyone can connect with at least one piece in the exhibition. Beyond connecting through the exhibit, Cross thinks that the Pioneer Tower Public Art Project and future installations give the community a symbol to gather around long after the exhibition is over.

“You might, wherever you are in the city, get a glimpse of it, and I think that’s pretty powerful. It’s allowing a work of art to really have a unifying effect,” Cross said. “The thing about an iconic work of art is that it can be something that, I don’t want to say I can define a community, but be something that a community can really build itself around.”