There are future Kubricks, Coppolas, and Speilbergs walking the corridors of St. Mary’s Hall. It’s a private school in San Antonio, and its media arts students consistently get into the country’s top film school programs.

Watch the students films coming out of St. Mary’s Hall Thursday on “Frame of Mind” at 10 p.m. on KERA TV.

Thursday night’s episode of “Frame of Mind” will feature some the school’s best work. The students sweep film competitions, and they’re well-represented at festivals like South by Southwest.

Digital cinema teacher Will Underwood says part of that success can be attributed to the availability of tech for aspiring content creators.

“The imagery that these young people can capture with just a $500 Rebel T2i is amazing,” he says. “If you know how to set the cameras up correctly, you can capture really beautiful imagery.”

Underwood says that before all of that come the basics.

“I always start with the technical stuff first because it’s sort of a baseline,” he says. “That’s in service of whatever your creative vision is. That’s the biggest impetus at that point once you have the basic technical skills. Who are you as a storyteller?”

Among the various credits throughout Thursday’s episode, you’ll probably notice Alexia Salingaros pop up repeatedly. She’s currently studying film at NYU’s Tisch School of the Arts, but she started making films long before that. 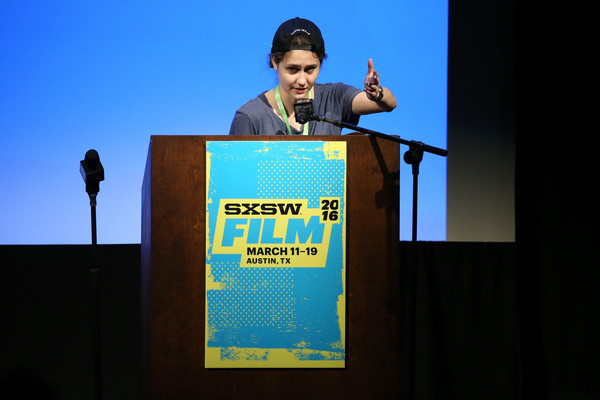 Filmmaker Alexia Salingaros at South by Southwest in 2016.

She got her start making brickfilms, stop-motion animations made with Legos, in middle school out of boredom.

Salingaros directed six of the featured shorts, and she had a hand in several more. She says St. Mary’s was the perfect place to explore.

“Having spent those four years creating films in each category, I now have a much greater understanding in the strong points of each form and what aspects successfully cross genres,” she says. “With time, I find myself moving towards the bridge between experimental and drama. For me, it’s the powerful, emotional stories that hit home the most. I’m constantly striving to find the happy medium between a strong storyline and portraying feelings through abstract imagery.”

Take “Luminosity.” It’s a science-fiction, claymation epic that was runner-up for Best Texas High School Short at SXSW in 2015.

In one of Thursday’s documentary shorts, student filmmakers Demar Gunter and Victoria Hartson tell the story of David Molak, who took his own life in 2016. The film focuses on the cyberbullying that Molak experienced before his death and features interviews with his parents.

“One of the things I tell my students is that this is powerful magic,” he says. “Being able to create virtual worlds and virtual experiences for other humans is one of the most powerful things you can do as an artist … We talk a lot about the power of media and how you’re responsible for what you put up on the screen.”

Salingaros says she’s noticed differences between how student films are approached in Texas versus New York.

“I think the landscape for films in Texas is much more structured and reserved than the extreme freedom of New York City,” she says. “I’m glad I can experience both ends of the spectrum and combine the two. I often feel as though New York films are too far on one side of the spectrum to connect with a broader country and world, so having the Texan ideology and viewpoint in mind allows me to ground stories more universally.”

For Underwood, part of the challenge is explaining the range of opportunities outside of the improbable feat of landing a multi-picture deal and moving to Hollywood.

“I think the most important thing we can do as educators is to demystify the working world,” he says. “I think explaining to them that these skills are useful in many different careers and there are many different things within the industry that you could do with a multitude of degrees or no degree at all. You have to be your own advocate as a creator in this digital age.”