Skip Navigation
Home > ArtandSeek.net > Get Some Symphonic Music With Your Space Travel

All images and videos: Artistic Concept/Visualization: Dr. Donna Cox and her team at the Advanced Visualization Lab at the University of Illinois at Urbana-Champaign. Lead Editor: Dr. Christine Veras at the School of Arts, Technology and Emerging Communication at the University of Texas at Dallas. Assistant editors: Catalina Alzate and Jessica Godwin.

The Richardson Symphony will combine classical music with animation — and astrophysics — at its concert at the Eisemann Center this Friday. Art & Seek’s Jerome Weeks says, think of it as akin to the Walt Disney movie, ‘Fantasia’ – but with NASA footage. And multi-media artworks in the lobby.

Claude Debussy’s “Clair de Lune” — it’s one of the most familiar pieces in all of classical music. But Friday at the Eisemann Center, the Richardson Symphony Orchestra will present “Clair de Lune” like no one else has. Behind the musicians onstage, there’ll be a huge, highly detailed video of the moon, rotating in the pitch black of outer space. The rims and fringes of crater after crater emerge slowly into the sunlight, looking like so much delicate lace.

Well, this year is the 50th anniversary of the Apollo landing.

“We started with the moon, and we thought, why stop there? Why not go into space further?” asks Richardson Symphony music director Clay Couturiaux. He and a team from the University of Texas at Dallas were considering that question because, this year, we’re not just marking the 50th anniversary of the Apollo moon mission. It’s also the 50th anniversary of the founding of UTD.

“And we were thinking of repertoire that would go along with the moon,” Couturiaux says, “and of course, Gustav Holst’s ‘The Planets’ was perfect.”

“The Planets” is Gustav Holst’s orchestral suite from 1916 — it’s something of a bus tour of seven planets in our solar system (seven because astronomers hadn’t spotted Pluto yet and Holst decided not to include the Earth). And just the 88 musicians needed to play Holst’s music — plus a female chorus  — just that makes this the RSO’s most ambitious project to date. But Friday’s concert – called “Celestial Celebration” – is a collaboration between the Richardson Symphony and UTD’s ATEC School. ATEC stands for Arts, Technology and Emerging Communications.  And with ATEC involved, the evening combines a concert with digital animations and multi-media installations. It’s a showcase for what both these outfits can do.

RSO executive director Laurie Garvie says, “So many people are involved – from the people of ATEC to the RSO musicians and staff and then, of course, Donna Cox and her team have given us access to the footage they’ve created with NASA. So it’s literally hundreds of people credited in the program.”

All of this  this began with $78,000 from what was then called the Eisemann Arts Initiative Grant. It was a one-time only encouragement for Richardson cultural groups to collaborate. The RSO approached ATEC about joining forces.

“And at first, we thought, ‘Oh, we could do some of the visuals.’ says Anne Balsamo, dean of ATEC. “But then we expanded our thinking – how could we really push this to explore new art experiences?” 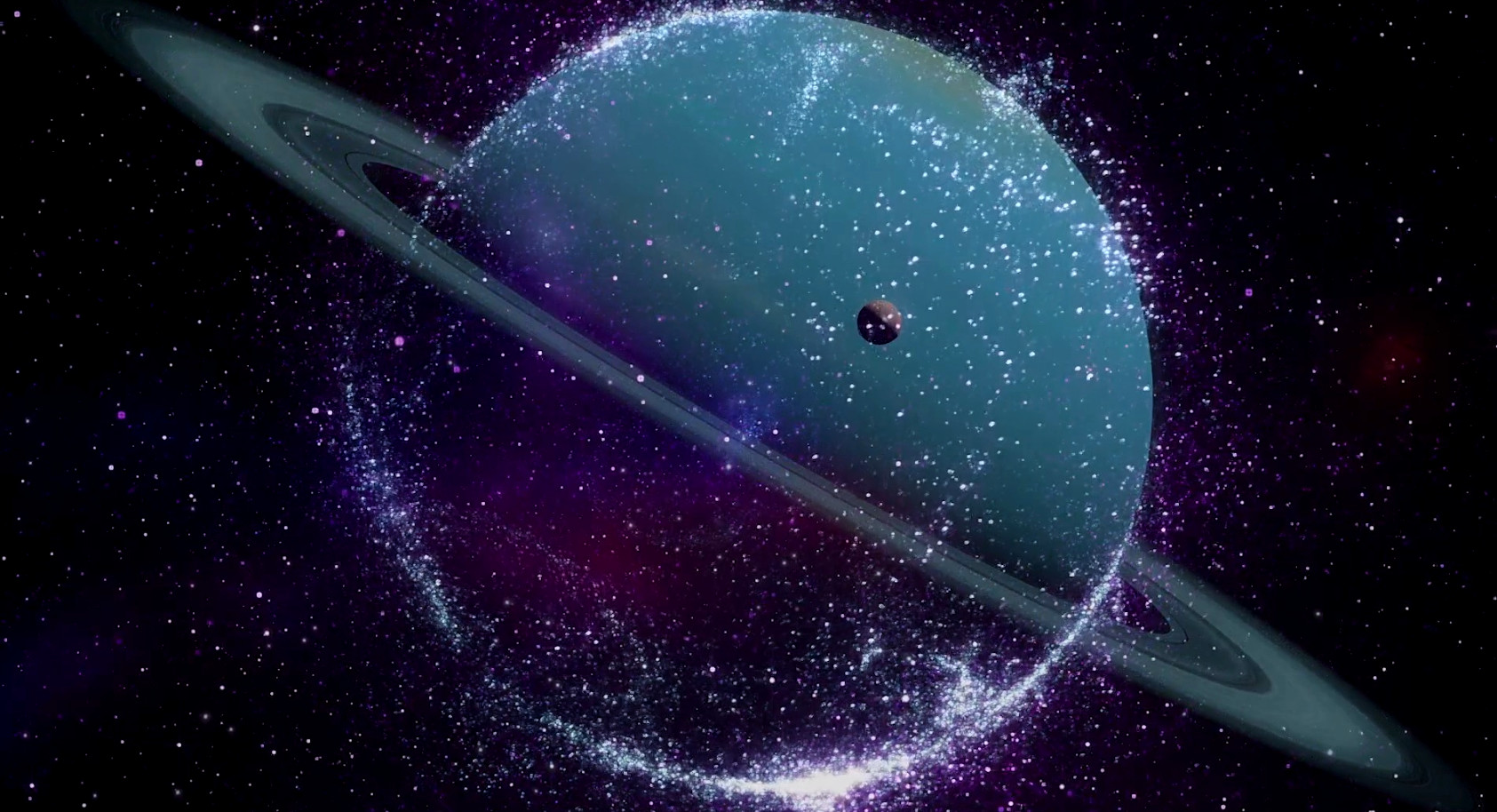 From ‘Uranus” in the Richardson Symphony Orchestra and UTD-ATEC collaboration, ‘Celestial Celebration.’

The answer was both cosmic and high-tech. There are now nine video pieces accompanying the concert, plus several advanced audio-video artworks in the Eisemann Center lobby. Balsamo estimates that with all this, ATEC has easily matched the original $78,000 grant.

To begin, ATEC’s animators had conductor Couturiax go through the music selections — including the opener, Josef Strauss’ “The Music of the Spheres” — discussing their inspirations, their moods, what they evoke.

“We listened together, and he talked us through,” says Balsamo, “so that helped us understand what kind of aesthetics we needed for the visuals.”

Some videos look like what you may have seen on TV programs about Jupiter fly-bys and Mars landers. Because, basically, that’s what they are.

“This is actually quite an extraordinary art-science effort,” Balsamo says. “The visual materials are data visualizations created by Dr. Donna Cox and her team at the Advanced Visualization Lab at the University of Illinois at Champaign-Urbana.”

Dr. Cox developed them for NASA using the huge data sets collected from deep-space probes and the Hubble telescope. And it just so happened that Cox is artist-in-residence at UTD-ATEC. So she gave the ATEC animators her data and visualizations — and they used them to create several swirling, swooping, color-splashed videos. They suggest God is a big fan of Jackson Pollock paintings.

These aren’t just portraits of icy chunks of rock in space. For instance, Mars, the God of War, is the best known of Holst’s planets — partly because it inspired composer John Williams’ soundtrack for “Star Wars.” But it’s typical of the animations that while the Martian video does speed across the planet’s dusty surface, we also end up facing what looks like a wall of flame.

“OK, so that’s interesting,” Balsamo says, “because when Holst composed ‘The Planets,’ his inspiration was based on the astrological symbolism of the planets. So we weren’t going to stick with literal planets.  But actually all that exists in the real universe.”

In other words, Mars doesn’t actually have a localized inferno on its surface. But that hellfire is drawn from real solar flares on the sun. The animators fused the two. And all those clouds of color we fly through? They’re re-combinations and interpretations of supernovas and nebulas and colliding galaxies. 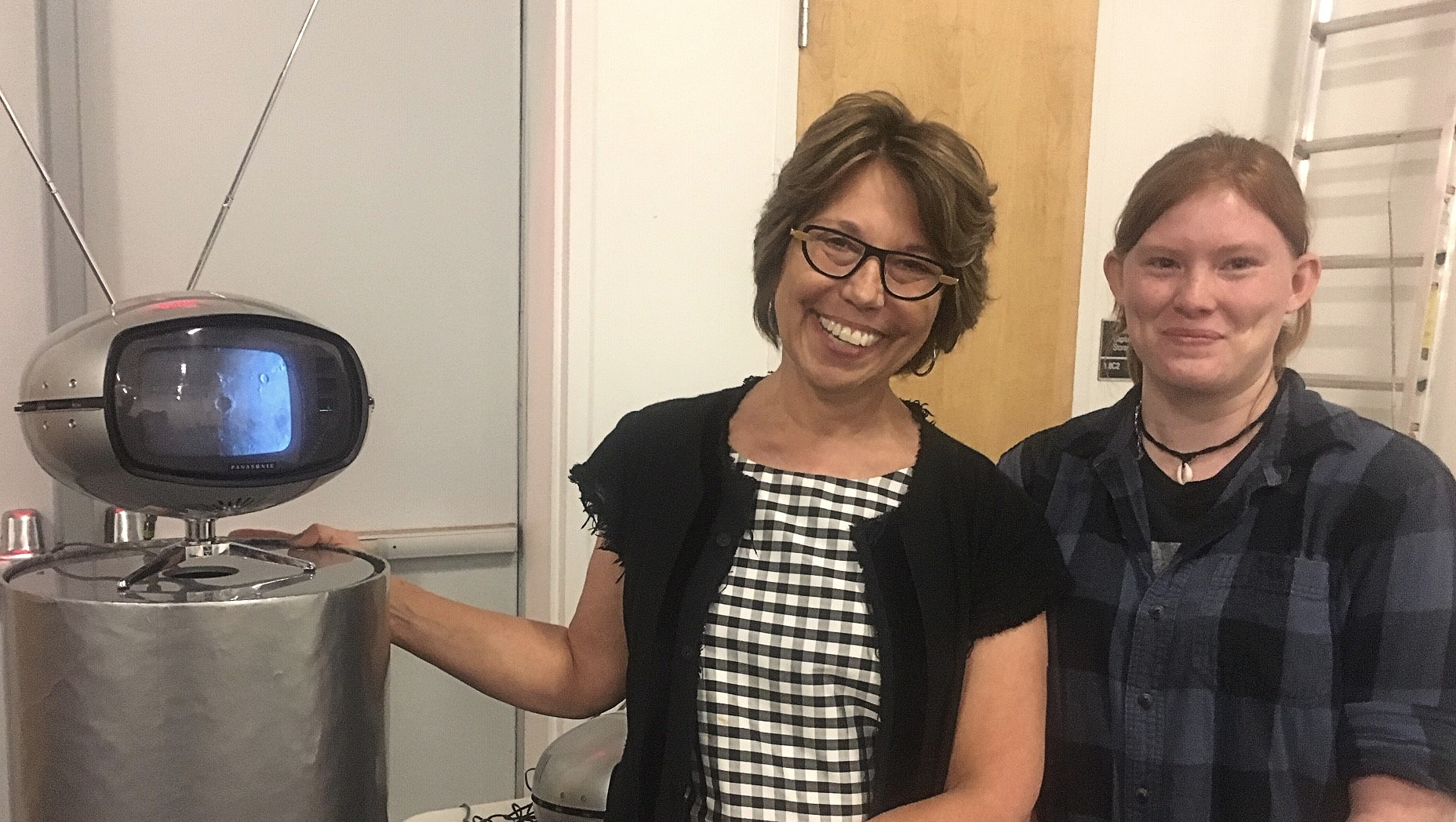 But all that’s just what’s going on inside the concert hall. In the lobby, there’ll be a sculpture of vintage TV sets from the ’60s and ’70s carrying Apollo mission broadcasts. Plus, three standing, audio-speaker set-ups will play  snippets from the thousand hours of radio conversations going on with the astronauts from around the globe.

And while you’re listening to all that, take a look at the lobby ceiling. There’s a laser projection of Friday’s night sky up there – in real time.

“So it’s like we’re looking up through a giant, unaided eye at all the space junk and satellites passing by,” Balsamo says. “And the moon is so cooperative because, looking straight up, it passes right over.”

All images and videos: Artistic Concept/Visualization: Dr. Donna Cox and her team at the Advanced Visualization Lab at the University of Illinois at Urbana-Champaign. Lead Editor: Dr. Christine Veras at the School of Arts, Technology and Emerging Communication at the University of Texas at Dallas. Assistant editors: Catalina Alzate and Jessica Godwin. For the Ann and Charles Eisemann Arts Innovation Initiative. 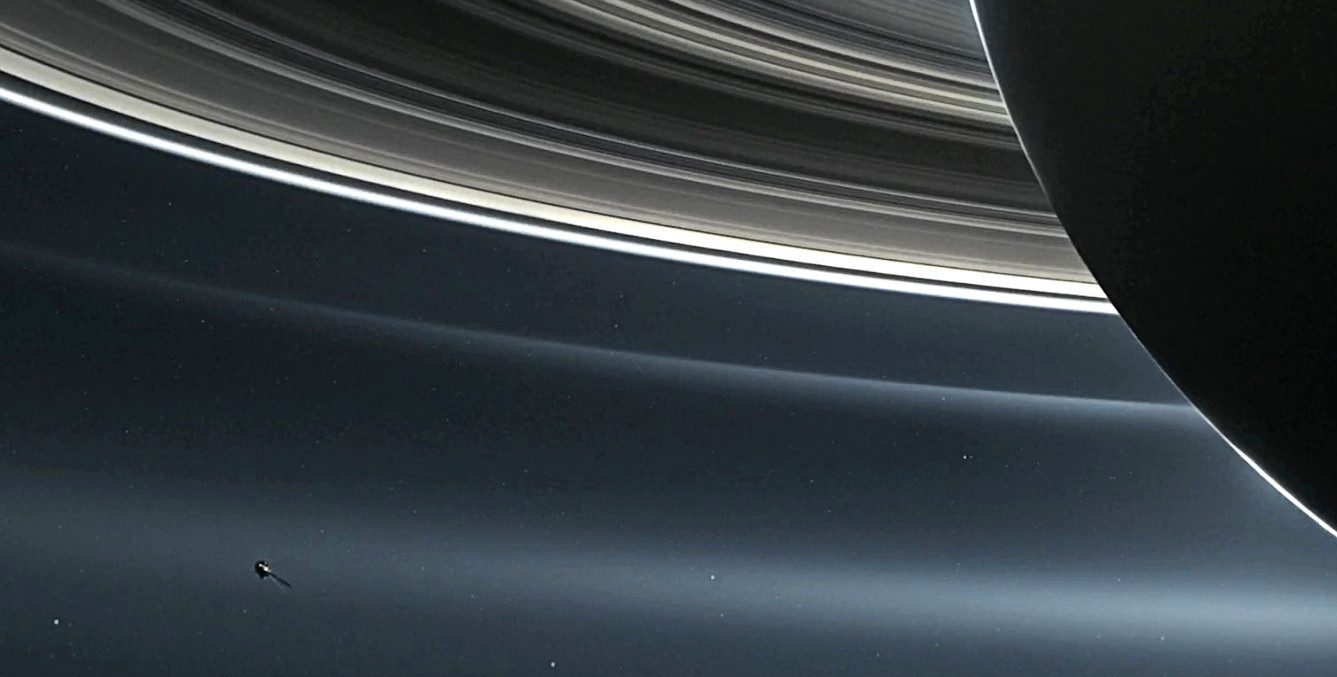 Some of the videos suggest a NASA fly-by from one of the Voyager explorations (see the probe in the lower left). Meanwhile . . .

. . .  other videos suggest God has been a really big fan of abstract expressionists like Jackson Pollock and Helen Frankenthaler.