Skip Navigation
Home > ArtandSeek.net > Got Questions About The New Van Gogh Shows In North Texas? Here’s How They Stack Up.

For months, we’ve seen those images from Vincent van Gogh light show blockbusters around the world — images of wonder-struck people bathed in giant swaths of tremulous color. There have been Instagram posts and TikTok videos, friends’ selfies and even that episode of Emily in Paris on Netflix. There have also been announcements of delays and arguments about which is the real, the true, the original van Gogh light show?

Now both attractions have finally opened in North Texas: The Immersive Van Gogh Exhibit in Dallas and Van Gogh: The Immersive Experience in Arlington.

So — which to choose? Which one’s better? Are they worth it at all?

1. Ask yourself: What do you really want to see from Vincent and his Magic Paintbrush?

If what you’re after is to stand soaked in bigger-than-life, post-Impressionist paintings so you can shout on social media – ‘Look! I’m covered in sunflowers!’ – then relax. At some point, both shows deliver that saturation. That’s why “immersive” is in their titles. It’s the big tweet.

But if that’s all you want, then you’re probably better off sticking with The Immersive Exhibit in Dallas. With its big, splashy, animated videos, you can feel like you’re walking through painting after painting.

In the end, it doesn’t offer much more than that. So save yourself some time, and skip to #4 below to get a few tips on how you might enjoy it best. 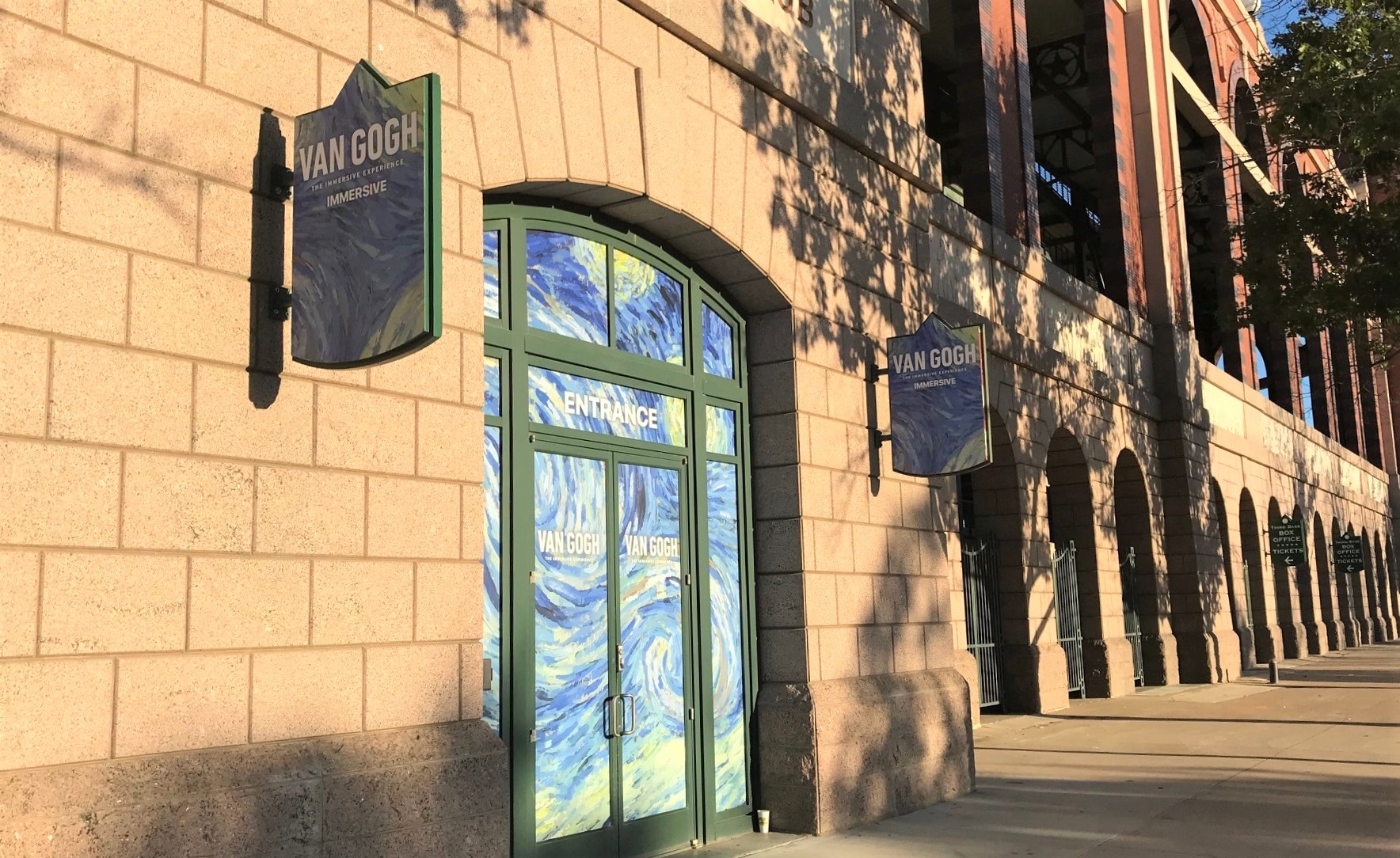 The entrance to “Van Gogh: The Immersive Experience” at Choctaw Stadium in Arlington. Photo: Jerome Weeks

2. OK. So what does The Immersive Experience in Arlington offer – in addition to the big, splashy animated video?

The Immersive Experience is oddly located — on the second floor of the concourse in what had been Globe Life Park. The former home of the Texas Rangers was just renamed Choctaw Stadium. The show’s street entrance is so modest, you can easily miss it.

The entire set-up is not at all like the imposing ‘Lighthouse Dallas,’ the former Masonic Temple in downtown Dallas, where the Exhibit, the other show, has settled in. That’s a historic, 1941 building that, on its own, I’ve always wanted to check out.

Instead, The Immersive Experience is arranged more like a museum exhibition with black-curtained halls housing different displays and wall placards with biographical information.The overall aim is to provide more than just swirling images, to provide some context for Van Gogh, his life and his art. 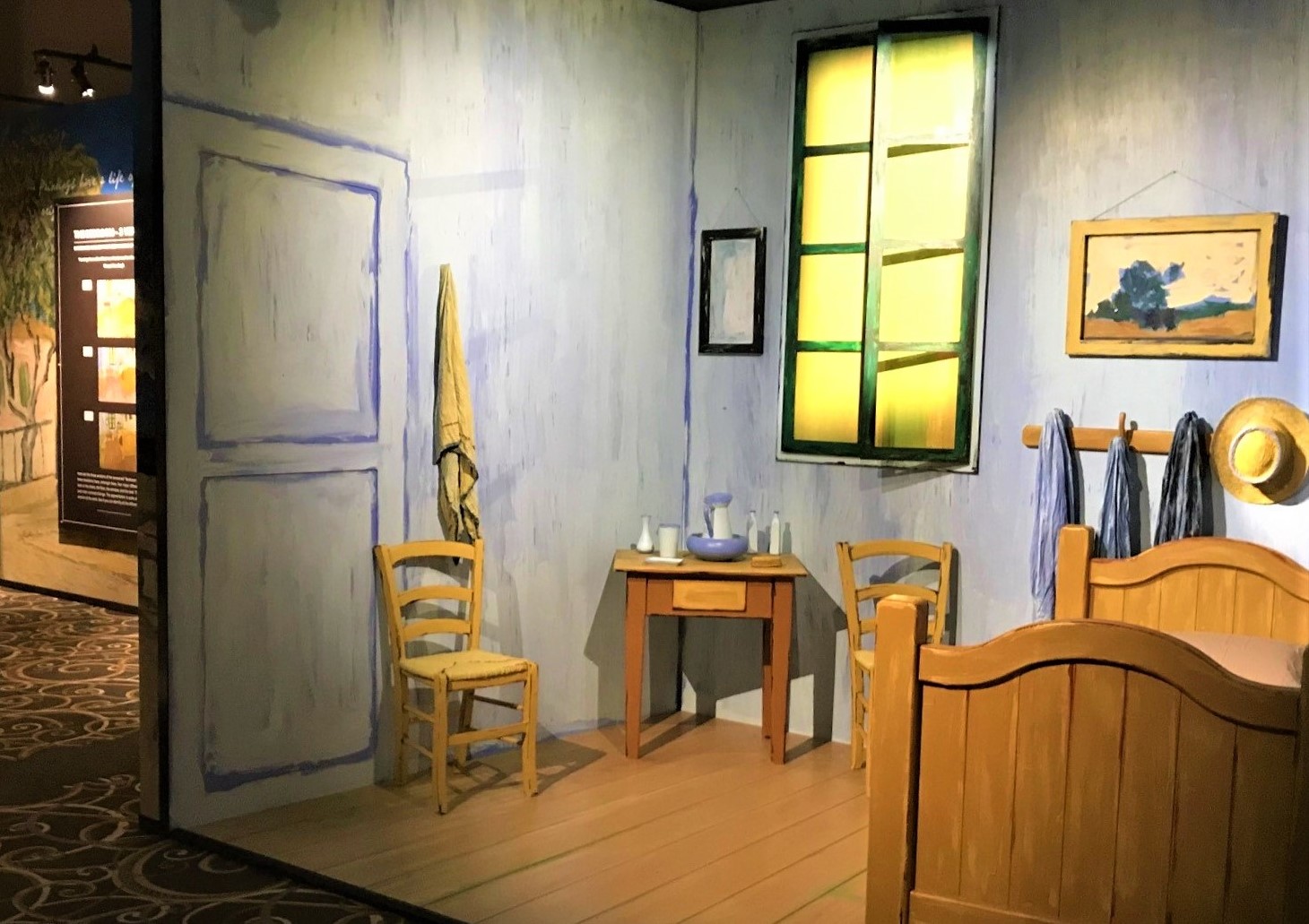 The displays at ‘Van Gogh: The Immersive Experience’ in Arlington include a miniature version of the upper room in the Yellow House that Van Gogh painted. Photo: Jerome Weeks

Even so, all of the displays are situated around the main gallery: a single, sizable room where hundreds of paintings by the artist shimmer and morph into one another. The wall-to-wall, wow-gee-whiz video will have you gawping for 35 minutes.

When it comes to providing more context, though, some of the additional displays at The Experience do seem odd. There’s an eight-foot-tall white bust of Van Gogh. The big head is used to project the artists’ 35 self-portraits. The results don’t provide much insight into his brush style or how age changed him. Instead, as his face dissolves or cracks or flutters away, it looks like some sped-up CGI effect in a horror movie.

But other displays can fascinate, whatever understanding they might actually impart. For an extra $5 (or a VIP ticket), you can put on a virtual reality headset and for 10 minutes wander around a digital version of Arles, the little town in the south of France where Van Gogh lived.

3. What other attractions does each show have – or lack?

So consider the fundamental purpose of your visit: Is this a date? Or is this a family outing?

4. OK. You’ve opted for The Immersive Exhibit in Dallas with its all-immersive approach (plus bar). Here are some helpful things to know before you go.

The Dallas show is basically three sizable rooms, all of them with floor-to-ceiling projections and cranked-up music. And each room runs the same loop of animated video. That’s it. The same thing three times. The whole show supposedly takes an hour long, but that’s mostly if you sit through it all each time.

More than a bit disappointing.

But you can actually get different experiences in the three rooms. My advice? Skip the first one. The first room is, well, the first and not the biggest, so people quickly crowd in. What’s worse, the room has a cluster of tall, mirrored obelisks in the middle. They’re like giant shards of glass, reflecting the videos in every direction.

Trippy, eh? Better than the Pink Floyd Laser Spectacular! Actually, it’s frustrating and confusing. What you presumably came to see – Van Gogh’s paintings embiggened on all four walls — gets obstructed and fragmented.

Room 2, on the other hand, is the one most often seen on social media. It’s the biggest (the biggest in both of these shows). It has circles marked on the floor where people can sit, socially distanced. Because the room’s so big, you can really get the overwhelming sense of a 360-degree landscape spread all around you. And yes, lookee there, you can see van Gogh’s brushstrokes the size of dinner plates slide across the walls.

But pro tip: Room 2 has a balcony. It may not give you that immersive wallow, but it does let you to step back and see most of the spectacle all at once. It’s the only place in either show where you’re offered this kind of vista. 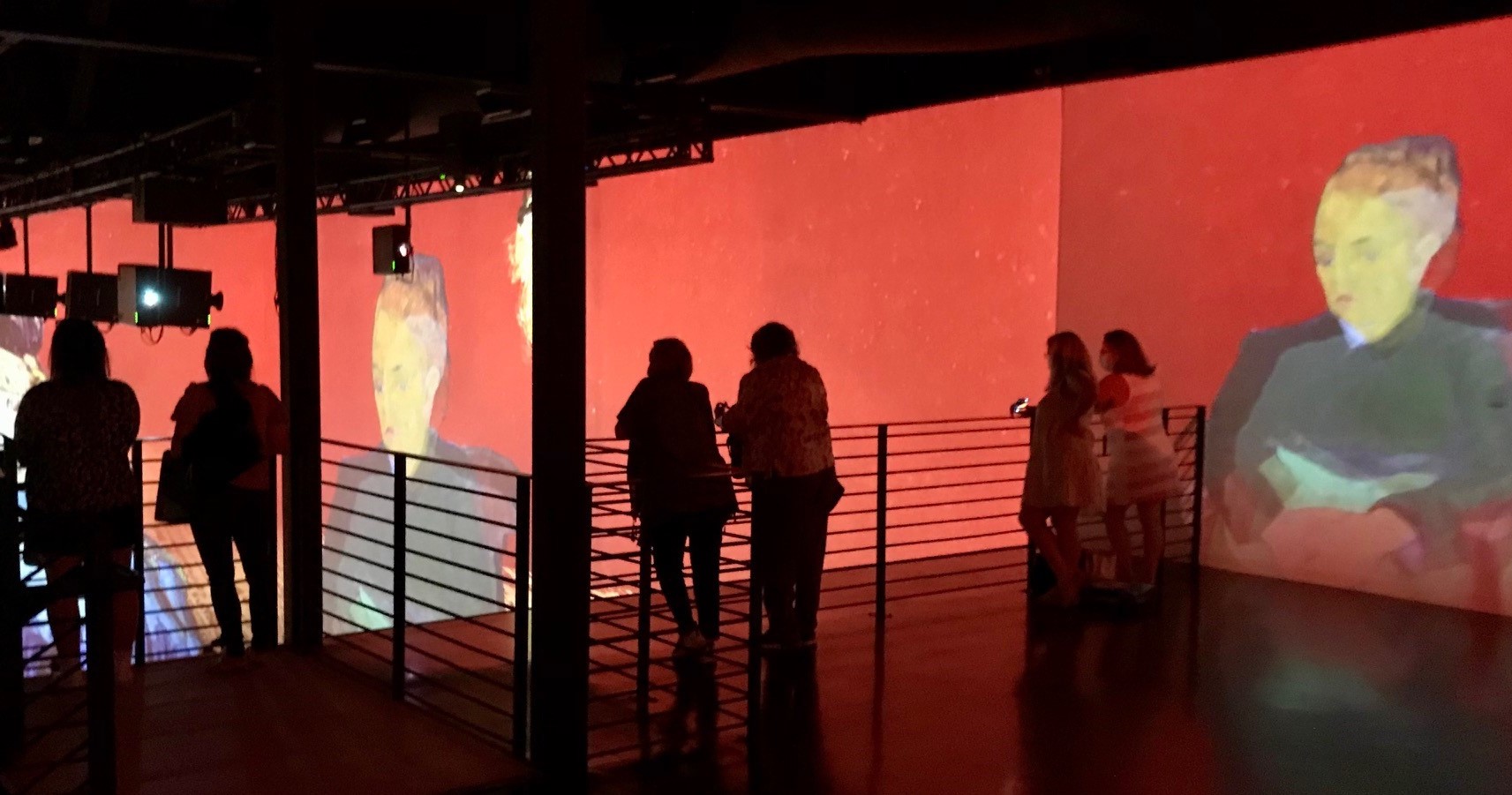 The balcony in the second room in ‘The Immersive Van Gogh Exhibit” in Dallas. Photo: Jerome Weeks

But don’t overlook the third room. Many people snap every photo they want in Room 2 and once they discover that Room 3 is, yes, more of the same video on a more intimate scale, they hustle on out to the gift shop. As a result, Room 3 is often less-crowded than the others. I spent more time there than the other two, partly because it’s not so head-spinningly large that you can’t grasp what’s going on.

5. There is one irritating aspect of both shows, but especially The Immersive Exhibit.

In the Dallas show, designer Massimiliano Siccardi’s dazzling, digital animations continually liquefy and dissolve Van Gogh’s paintings. Nothing stays solid or motionless for long. And it’s all emotionally revved up by Classical Music’s Greatest Crescendos. It’s true to a degree of The Experience as well, but with The Exhibit, Siccardi’s ongoing stream of transformations has you repeatedly realizing, “Wait, is that The Church at Auvers?”  — and it’s gone from your mental grasp, vaporized into something else.

After 20-30 minutes of this, you may find yourself wanting some stillness, a little moment just to contemplate a face, a wheatfield, a sunset. You want some time to really see these and to consider just how van Gogh managed to transform them with his rapturous, obsessive feel for oil paint, for nature, for his fellow humans.

Traditionally, this is what the art museum has offered: the chance for a quiet, sustained encounter with a masterwork. This October, the Dallas Museum of Art will host 17 actual van Gogh paintings, all of them about a single olive grove, all of them painted during van Gogh’s stay at the asylum of Saint-Rémy-de-Provence.

Did we mention he was obsessive?