Battered financially by the pandemic, the Dallas Opera shut down one show, postponed its entire season until next March. It’s laid off staff members, made others part-time. But surprisingly, right now, the Dallas Opera is killing it — online. And with material you might not expect.

To give an idea of how big the Dallas Opera is on social media: The Metropolitan Opera in New York is one of the largest performing arts organizations in the world — the peak of American opera. In a recent week, the Met put up 21 posts on Facebook, many of them live-streamed, fully staged operas. They’re very expensive productions to stage, and expensive to stream. That week, the Met received around 150,000 total engagements. ‘Engagements’ means people who viewed, commented on or shared the posts.

“Everest” was the last opera by Joby Talbot the Dallas Opera premiered. Although its new season has been cut back, it’s still set to premiere Talbot’s “The Diving Bell and the Butterfly.” Photo: Karen Almond

That same week, the Dallas Opera put up 20 posts and got 370,000 engagements — more than twice the Met. In fact, the only opera company in the world that out-polled Dallas was the Royal Opera House in London — with 28 posts, it was up in the stratosphere with more than 780,000 engagements.

Online videos aren’t new for the Dallas Opera. Over the past 12 years, it’s put up more than 400 on its YouTube channel. A lot have been what you might expect: promos for operas, excerpts from operas, solo recitals from singers, interviews with opera artists, panel discussions.

But there’s also been some of this:

The Dallas Opera commissioned musicologist Stephen Johnson to create “Opera in Brief,” a series of comic, stick-figure animations to explain the art of opera to newcomers.

But the Dallas Opera’s current videos – the new stuff that’s getting all the attention? They’re posted on YouTube and the opera’s own website. But those big audience numbers they’re getting are entirely on Facebook. And that audience skews younger — in their twenties and thirties. The kind of audience classical music managers dream of.

Lomeli explains that in January, the Dallas Opera had lost both its marketing director and social media manager.  But it had a new season to announce. So he spoke to Ian Derrer, the opera’s CEO.

“I said to Ian, ‘My assistant at the time, Annie Penner, and myself are really great social media aficionados,’” Lomeli says. “So why don’t we help a little bit to do the social media campaign?”

On Facebook, the Dallas Opera had been reaching 200 people a day. With Lomeli and Penner handling the social media, the season announcement snagged 3,000. “We took note of that, it was interesting,” Lomeli says. “But didn’t do anything with it.” 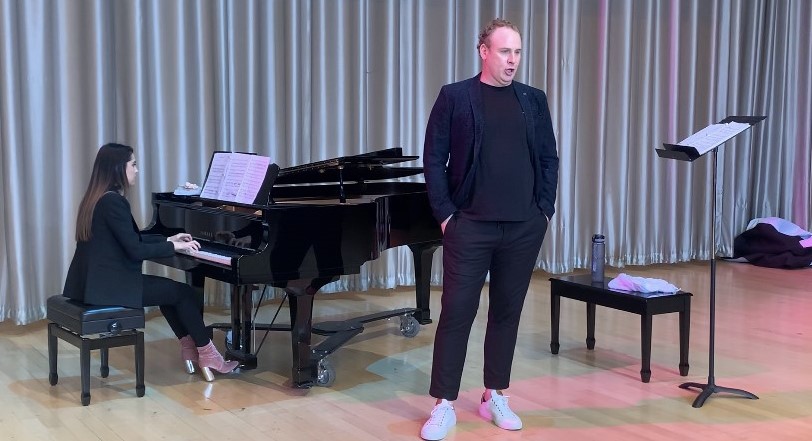 Grammy-winning baritone Lucas Meachem and his wife Irina at the piano, in a recital for the Dallas Opera. Photo: Cayley Carroll

Then in March, during rehearsals of Verdi’s “Don Carlo,” the company had to shut down the production because of COVID restrictions. Grammy-winning baritone Lucas Meachem approached Lomeli about possibly doing something while he was still in town, and Lomelli helped throw together a bare-bones recital with Meachem and his wife Irina on piano.

With social distancing, he recalls, there were just five people in Hamon Hall during the entire March 16th taping.

“But we did it Facebook live, and we got a total reach of 50,000 accounts. And so we were on to something.”

Lomeli researched what other opera companies were doing with social media. Most online opera videos are performances. Or they’re ads for future performances. But with the COVID shutdown, there weren’t any new performances coming for months. And no new performances meant no new star singers in town for recitals or interviews. Finally, when it came to full operas, Lomeli certainly couldn’t match the grand productions the Met can regularly pull from its shelves. 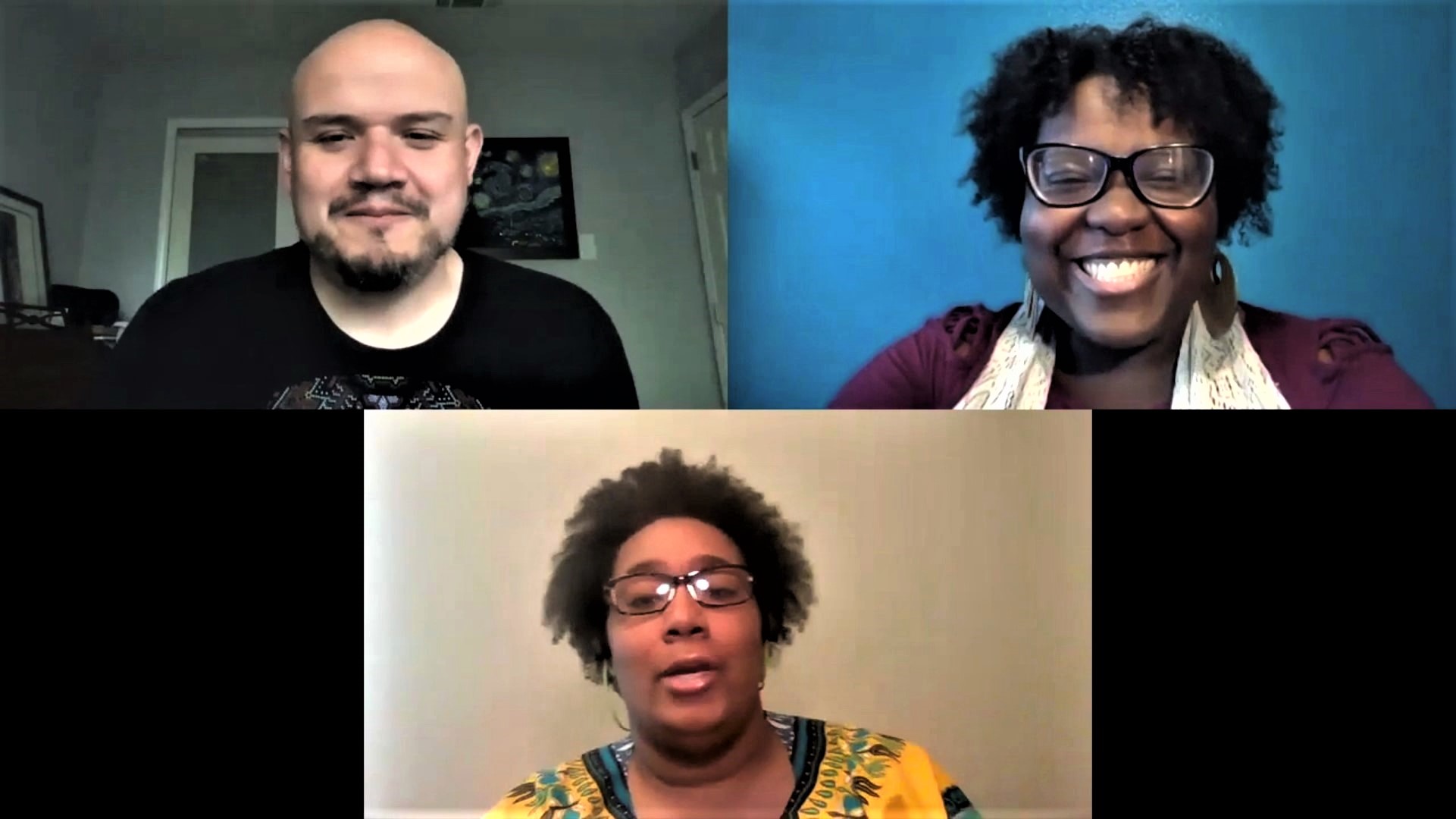 David Lomeli (top left), Quodesia Johnson (top right) and Kristian Roberts (below) on an episode of “Taking The Stage With Kristian And Quo.”

All this, Lomeli says, actually gave him the freedom to experiment with new ideas using social media. He created an entire roster of new shows talking about things you rarely hear about from opera artists. Fat-shaming. The need to be multi-tasking entrepreneurs to sustain a career as an opera singer (both from “The Diva Who Hustles”). Opera and feminist empowerment. Opera and yoga (from “Living Your Best Life with Deanna”).

“Basically,” he says, “we needed to create something like ESPN or The Food Network.”

You mean, I ask, you talk to chefs about the politics of food, but you don’t do the cooking?

“Exactly, that was the premise.”

ESPN was a particular inspiration. It airs plenty of live games. Or it did. But even before the pandemic shut down the major leagues, the channel’s chattering hosts also spent thousands of hours hashing over off-field topics: contract disputes, scouting reports, athlete’s private lives, even politics. Like what Colin Kaepernick has come to represent — even though Kaepernick hasn’t been able to play professional football for more than three years.

So ESPN talks about everything people might be passionate about sports. Lomeli set out to do the same with opera.

The weekly schedule of 14 shows he developed (two new episodes drop each day) is called the TDO Network (for The Dallas Opera Network). And like a TV network, it’s an array of interviews, performances, roundtables, lifestyle programs, plus a humor show from soprano Elizabeth Sutphen (“Late Night With Liz”) – her friend/collaborator happens to write for Stephen Colbert. There are even promos. Lomeli has his content creators give him a short promo two days before their latest episode goes live — just to goose social media interest.

“Doing social media like this costs money,” Lomeli says (his show’s creators generally get paid a nominal fee). “It’s time-consuming. But it’s also speedy, it needs to be speedy, and opera generally isn’t speedy” — not when it takes years to put together a single production. But to hold viewer interest, social media demands fresh meat all the time. It’s nothing unless it’s up-to-date. Put up something about a news event two days afterwards and you’re already irrelevant.

It’s one of the exhausting curses of social media — and one of its tools. Lomeli wanted TDO Network hosts who’d candidly address leading headline issues: the pandemic, the economy, but especially systemic racism.  The company’s conductor, Emmanuel Vuillaume, has even used his show, “Ask Maestro,” to discuss racial politics with bass singer Morris Robinson.

But Johnson says, that’s really just where they start.

“So there are inequities in every part of life,” she says, “not just the arts. So we wanted to use the arts as a platform but the discussion often extends into education, into the economy, into community, it extends into mental health.”

Lomeli says episodes of “Taking the Stage with Kristian and Quo” have regularly gotten 35,000 engagements.

As popular as they are, as stimulating, as engrossing – online videos like these aren’t going to save the Dallas Opera from our current financial and medical crisis. Facebook videos rarely pay for themselves. They’re not a major income resource. But as Lomeli says, the real function of social media is to stay connected with an audience. It lets them know you’re still in the game.

At the moment, people are pitching Lomeli ideas for new shows. He’s already mapping out his next season.

And yes, he knows he sounds like a TV executive.