Texas Standard‘s David Brown spoke with Executive Producer Jaime Dávila of the new Netflix series on Tejano star, Selena.  Dávila says it’s exciting to have the story of “a Mexican-American family from South Texas to premiere in 190 countries.” The series began airing on Netflix this week. 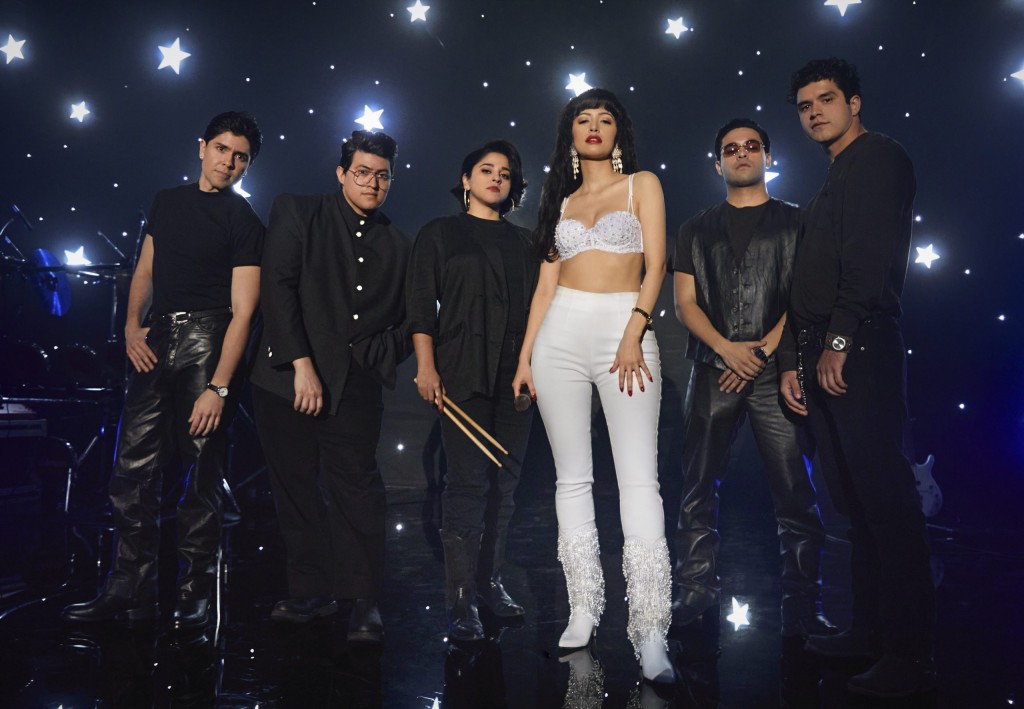 A still photo from the Netflix show “Selena: The Series.” Michael Lavine/Netflix 2020.

The title of “La Reina” bestowed upon singer Selena Quintanilla has persisted 25 years after her death. Now, Selena and her family’s story is being told through a new Netflix show premiering Friday titled “Selena: The Series.”

Executive Producer Jaime Dávila says the Quintanilla family’s story will resonate with people around the world.

“What’s really exciting about the series is that you have a Mexican-American family from South Texas to premiere in 190 countries. You know, she’s become a world icon. And I think it’s really great that everyone around the world will now be able to see that,” he said.

Dávila spent his early years growing up in the Rio Grande Valley in McAllen, before his family moved to New York City.

“Honestly, the Valley, the Rio Grande Valley, never really leaves you. So it’s a big part of my lifestyle,” he said. “When you grew up in the Valley in the early ’90s in South Texas, to set the scene … it was Selena Country. Right? It was at every quinceañera, weddings. And I think what’s really special about the series is we really sort of place Selena in that larger South Texan world. We feature Johnny Canales, we feature Y Los Dinos. I think it’s a really exciting show and series for fans to get a look at not just Selena, but the rest of the the people that made it happen.”

Because Selena’s story is legendary, Dávila says this show has the opportunity to correct facts and add a different window into viewers’ idea of Selena’s life.

“I think what’s so amazing about Selena and the entire Quintanilla family,” he said, “is that they were really a family that worked together to make this dream happen. You know, Selena was the star, the vocals, but her brother, A.B., wrote all the music. Her dad was her manager that drove everywhere and her mom was there as well, giving so much moral support and guidance.”

Dávila says that it takes many people to make a dream happen, especially when talking about a legend. Which is why in the nine episodes of part one of the two- part series, the story focuses on highlighting so much of Selena’s origin story.

The series is not without controversy, however, and has received mixed reviews. One review by Vice asked, “Which stories Hollywood is willing to tell?”

But Dávila’s says it shouldn’t be looked at as an either-or situation but rather a “both-and.”

“I understand the critique of wanting to have more and I embrace that,” he said. “I also want to have so much more Latino representation on screen. That’s what I’m fighting for every day. But, you know, I would argue I actually don’t know of any TV shows that feature a South Texas family. And I would argue that I haven’t seen that in my entire life.”

More Latino stories and representation has been an ongoing issue for Hollywood. Rep. Joaquin Castro (D-San Antonio) wrote a special column for Variety in August focusing on just that.

For Dávila, a he hopes that more voices hold Hollywood accountable. He wants Latino and Hispanic communities to come together for change.

“I would say, let’s work together. And that ‘Selena: The Series’ is not supposed to come at the cost of anything else. It’s supposed to be additive,” he said.

The Ringer‘s review of the series said it should be watched in a “very specific way. You should watch it as a supplement to 1997’s movie, and not as a replacement.”

The memory of Selena among fans has not died down over the past quarter century. And with a part two on Netflix still to come, plus toy and make-up deals, it’s not likely to slow down any time soon.