Austin City Limits – the public television program featuring an eclectic mix of musicians of from all sorts of genres – is wrapping up its 45th season. And after such a legendary run, the show’s creators can finally say that their program airs on PBS stations across the country. (That was just announced last month.) With that in mind, reporter Joseph Leahy from KUT 90.1 FM in Austin set out to answer a question from listener Dana Harada. She wanted to know how Austin City Limits picks the bands that play on the show. 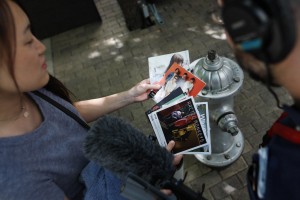 Dana Harada grew up watching Austin City Limits and has gone to several tapings at the Moody Theater since moving to Austin in 2012.
Photo: Jorge Sanhueza-Lyon / KUT

Dana Harada, a Chicago native, has watched Austin City limits for years. And since moving to Austin in 2012, she’s also attended many of the tapings at the Moody Theater, where the show has been produced since 2011.

“I brought all of my programs from all the past ACL Live recordings that I’ve been to,” she said, pulling a stack from her bag at the theater in downtown Austin. “The most recent one was Arctic Monkeys … Wild Child, St. Vincent, Paul Simon, Heartless Bastards, Sam Smith, Spoon and Jenny Lewis.”

She was about to add to that list The Revivalists, a New Orleans band getting ready for a taping that night. 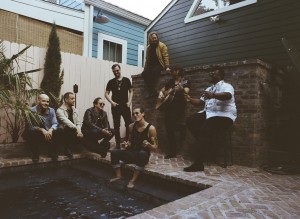 After a sound check, the group’s lead guitarist, Zach Feinberg, said he also grew up watching ACL on his local PBS station in New York. Though The Revivalists have played primetime TV – with performances on The Late Show, Jimmy Kimmel LIVE!, Ellen and Conan – he said ACL is a much bigger deal.

“We played at Emo’s in Austin two years ago and it was a great show … and I remember somebody saying, ‘The ACL guys were here and they loved it,’” he said. “And we were like, ‘Oh, hell yeah!’”

A Showcase For Musicians From Austin And Beyond

The person most responsible for choosing musicians for the show is Terry Lickona, who’s been either a producer or the executive producer for ACL for 42 years.

“I think our philosophy evolved over the years when it comes to the booking process,” he said. “When the show started, it was literally a showcase for Austin music, and then it became a showcase for Texas music and then regional music.”

Lickona started producing for ACL shortly after its pilot program, featuring Willie Nelson, aired in 1974. The show’s music choices have been changing ever since, he said.

“There was a time when we considered ourselves more country than any other genre and then we decided we were more American and that expanded our definition of what the music was,” he said. “And then we were into indie sounds, independent music – no matter what genre. But we came to the point that anything goes if it’s good and if it’s original.”

Thirteen live performances are broadcast each season. Lickona said putting together a lineup entails finding the right balance of genres, while also working to include Austin musicians. ACL producers also look out for established musicians who have released new albums, are on tour or have won a recent Grammy.

More Than The Money

According to Lickona, PBS determines the pay for musicians who perform for ACL.

“I’m almost embarrassed to admit how little it is,” he said. “It’s about $500 for the artist, and it really doesn’t matter who it is – whether it’s Kendrick Lamar or Brandi Carlile or whoever.”

For first-timers like Feinberg, though, playing ACL is pretty much its own reward.

“It’s obviously huge for us,” he said. “As any music fan can attest, this is a revered program. I’ve grown up watching it. There are so many iconic, classic performances on it – from Stevie Ray Vaughan, Willie Nelson and some of my favorite newer artists.”

ACL says it’s always looking for new acts to showcase and encourages musicians to submit their work. Tickets to the tapings are free: the sign-up page for the next show is usually posted online a week in advance, but seats are limited and awarded randomly.

The ACL show featuring The Revivalists is scheduled to air this fall.