When Oak Cliff natives Lee Escobedo and Patrick Patterson-Carroll first came up with the idea for the “What Is Cinema? Podcast” they

“What Is Cinema? Podcast” Round Table Discussion ,7 p.m. tonight.

believed that a program that analyzed films and looked at them as an art form would be great way to bring creatives from their neighborhood together. And it did.

The pair started the project back in February, and two of the neighborhoods’ cultural institutions immediately lent a hand to the would-be podcasters. The Texas Theatre, which screens classic and notable films, allowed them to use their space to record their podcast and Rafael Tamayo, the manager of the Oak Cliff Cultural Center, worked with them to get grants from the City of Dallas.  Escobedo and Patterson-Carrol also got local bands to perform at their podcast release parties and they invited artists to participate in their discussions about film. The podcast instantly created a network of artists and creative-minded people that wanted to contribute to the ol’ neighborhood.

Now, a couple months into the endeavor and with an average attendance of 100, the team is transforming their podcast release parties into forums to discuss inequity, race, gender, sexuality and the role of cultural institutions. “We want to discuss the issues and topics that are important to people in Oak Cliff,” says Escobedo. He stresses the importance of people having a place to voice their concerns and for folks to hear from people who have Oak Cliff at the forefront of their mind. 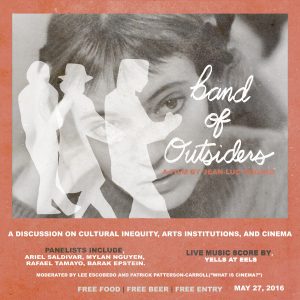 These sorts of discussions have been happening more often in the Dallas arts community. Just last month, an art collective called  Michelada Think Tank gathered leaders in Dallas’ cultural community to discuss cultural inequity and what they could do to improve upon the situation. Darryl Ratcliff, one of the event’s organizers told D Magazine that they “want to have the voices, the stories, the perspectives of people of color who live in this city represented with real power and proportionately.”

On a micro-level, that’s sort of what Escobedo and Patterson-Carroll hope can come out of their forums. Of course, they and their panel of Oak Cliff residents and cultural workers will be discussing a bit of cinema, but they believe that doing so will open up the gates to a wider discussion.“Of all the art forms, cinema acts as a mirror into society, and ourselves,” says Escobedo. “It gives us an opportunity to look into the darkness, the warmth, and find what makes us human.”

And Escobedo is right. Films incorporate several mediums of artistic expression –  music, design, photography and more. Films are also doorways into perspectives unknown to people from different racial, economic and cultural backgrounds. They can open our minds to things we never knew about one another and make us aware of our commonalities, which is why the pair believe that these dialogues can be eye opening and worthwhile.

The duo do not know how long these forums will continue, but Escobedo says that talking with members of the African-American, Hispanic, Asian, LGTBQ and other communities helps him to be a better neighbor and co-host of his podcast.

The “What Is Cinema? Podcast” Round Table Discussion begins at 7 p.m. at the Oak Cliff Cultural Center and is free and open to the public. Panelist include Rafael Tamayo (Oak Cliff Cultural Center), Ariel Saldivar (Oak Cliff Foundation), Mylan Nguyen (The Safe Room), and Barak Epstein (Texas Theatre).  Free food and beer will be provided and the evening will be scored by the neighborhood’s own Yell at Eels.

The most recent episode of the podcast will be available Sunday  via Soundcloud and iTunes. Escobedo and Patterson-Carroll will be joined by Dallas-based artist and educator Michael Morris to discuss Jean-Luc Godard‘s Band of Outsiders.