Skip Navigation
Home > ArtandSeek.net > Into The Digital Darkness Of Stage West’s ‘The Nether’

Live theater has rarely dealt with things like digital worlds or cyber crime – theater can’t resort to the CGI effects that sci-fi films can. But this weekend, Stage West presents the Texas premiere of ‘The Nether’ by Houston-born playwright Jennifer Haley. KERA’s Jerome Weeks reports it’s a creepy thriller about virtual reality – and some of our worst impulses.

It’s the near-future, and people can spend large chunks of their life in online worlds of virtual reality. A person can even ‘cross-over’ — become nothing but a life-supported husk while their mind travels into realms where they can still touch and taste, feel any sensation, satisfy any desire.

The play, ‘The Nether’ opens like a hard-edged, TV cop show — something like ‘Law & Order SVU / MAC OS.’ A female detective named Morris (Alison Pistorius) interrogates Mr. Sims (Aaron Roberts). Sims created one of these digital netherworlds, an encrypted one called The Hideaway that admits only a tiny number of security-checked visitors. 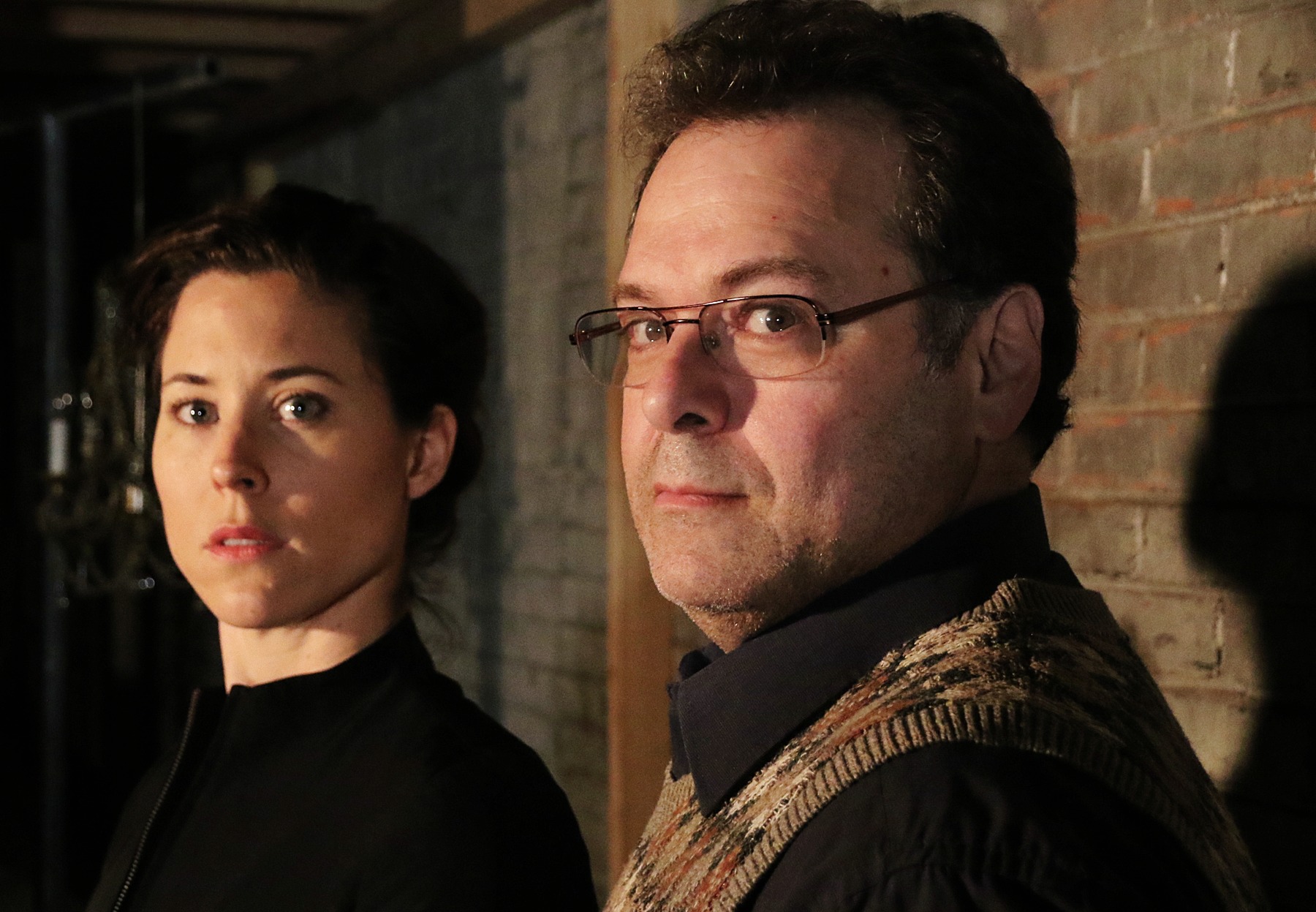 “But really, Mr. Sims, an average of 14 hours a day in the Nether?” Morris demands. “What can be gained from spending so much time in something that isn’t real?”

“Just because it’s virtual doesn’t mean it isn’t real,” the businessman responds. “Eighty percent of the population work in office realms. Children attend schools in education realms. There’s a realm for anything you want to know or do or think you want to try. As the Nether becomes our contextual framework for being, don’t you think it’s a bit out of date to say it isn’t real?”

Despite the posturing and cat-and-mouse questioning, the detective already knows what’s going on in The Hideaway. She investigating sex crimes: Sims is a pedophile. In the play, nothing sexually explicit ever happens. But ‘The Nether’ has gotten a lot of awards and attention — partly because it’s a cyber noir, a form of thriller typically done by films not stage dramas, but also, and more significantly, because it addresses uncomfortable issues of freedom, imagination, depravity and the web.

‘The Nether’ is not just an ingenious thriller; it’s a drama of ideas. Cringe-inducing ideas.

“I knew I wanted to confront the ethical question of what we could be allowed to do in virtual reality,” explains playwright Jennifer Haley. “And I figured that it had to be an extreme ethical situation. So I thought it could be pedophilia or people playing genocide. And pedophilia was the easier one to deal with onstage — although when I realized that, I was like, do you — oh my God — do you really want to talk about pedophilia?”

Pedophilia presents perhaps the worst, most horrific argument for online freedom of expression. It’s true that no one in The Hideaway is physically hurt. They’re all virtual avatars — meaning they’re essentially digital shells for the human puppet-masters who are safely elsewhere. Basically, they’re  upgraded versions of the characters we play in games like Call of Duty or Assassin’s Creed.

But as the mysterious Mr. Sims argues, just because the Hideaway is virtual doesn’t mean it’s not real. It still expresses very real desires. 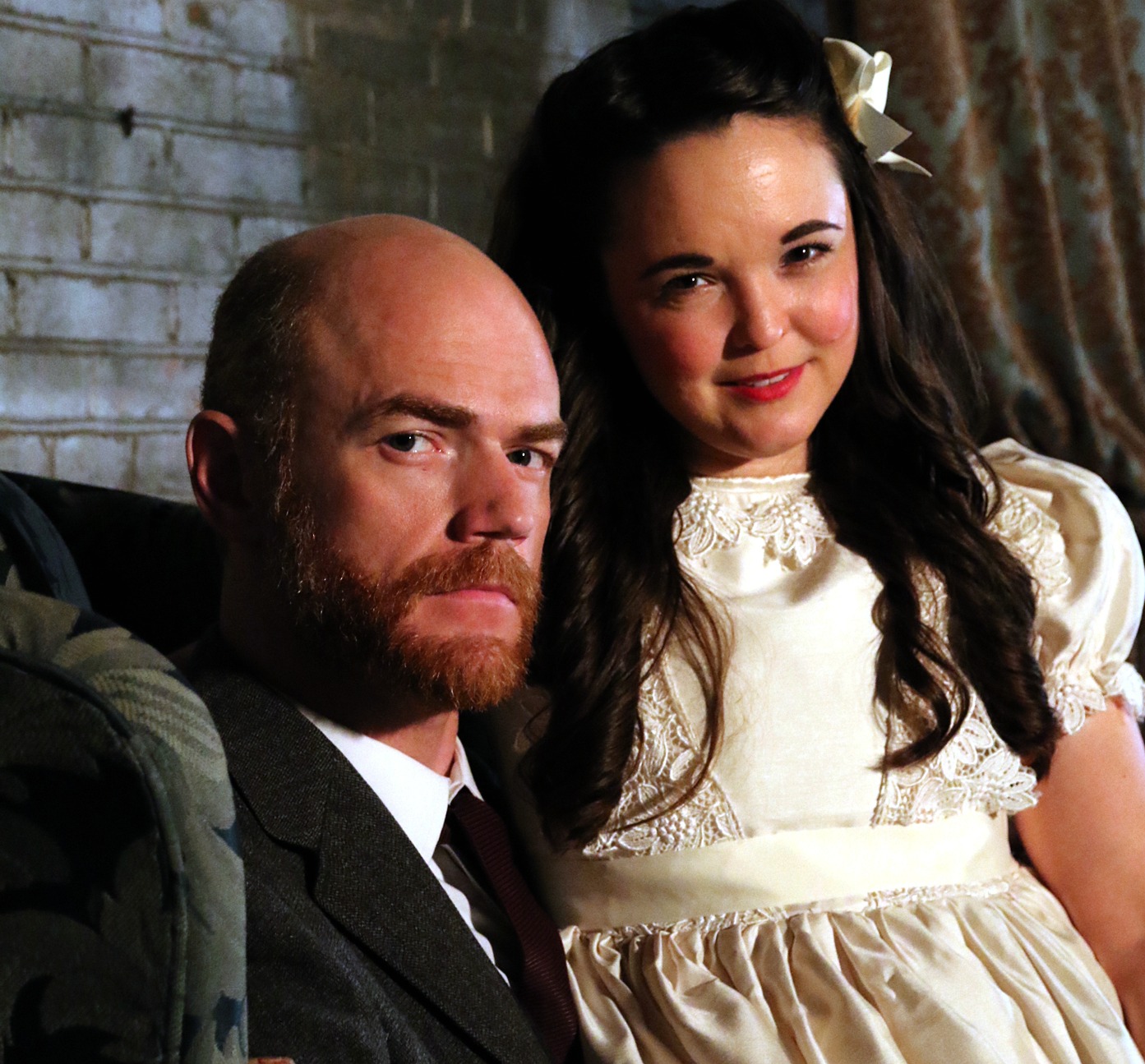 Playwright Haley has been intrigued by such issues of cyber ethics ever since her tech-oriented day job seeped into her night-time writing. The 45-year-old was born and raised in Houston and San Antonio. She got a double degree in liberal arts and theater from UT-Austin, and eventually joined an inventive commedia outfit, Troupe Texas. But while temping in offices in Austin and later Seattle, Haley more or less taught herself web design.

“Even as I was learning web design,” Haley says, “I was thinking this would be a great way for me to make money as a writer because I could already see the flexibility it gave me.”

Haley ditched freelance web design to get back into theater — but brought the web with her. In 2003, she was admitted to Brown University’s graduate playwriting program. In 2005, she started work on her horror play, ‘Neighborhood 3: Requisition of Doom.’ In it, teenagers are addicted to a zombie-killing computer game — so addicted, they eventually enter it.

People entering imagined worlds like this often happens in Haley’s plays — whether those worlds are role-playing games or graphic novels. In ‘The Nether,’ we enter The Hideaway – because an undercover detective has managed to sneak inside. And inside The Hideaway, Sims asks a young girl (Jad Saxton) about this new visitor.

“You’ve been spending quite a bit of time with him.”

“He’s fascinated by what you’ve done here. He asks all kinds of questions.”

One of the clever surprises in ‘The Nether’ is that when we get to the Hideaway, it’s not a gleaming, high-tech temple nor is it a squalid dystopia. It’s an English country manor, and Sims is done up like a proper gent while Iris is dolled up in white lace. In fact, the entire atmosphere evokes such Victorian-Edwardian children’s stories as ‘Alice in Wonderland’ and ‘The Secret Garden.’ Instead of heading into the future, we’ve been transported back to Downton Abbey. 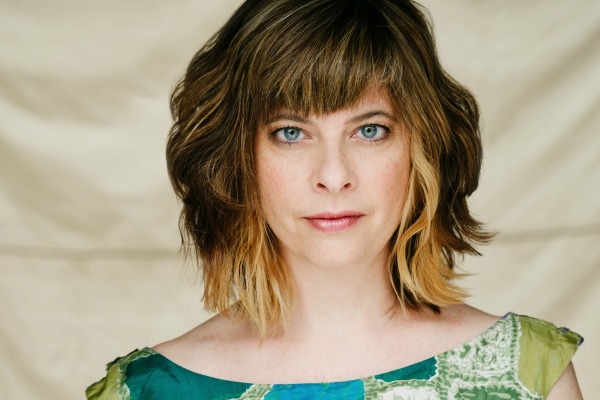 “I didn’t want the audience to feel they had to figure out this world,” explains Haley. “I wanted them to come into a world they felt like they knew.

“So definitely, Lewis Carroll, little girls and childhood innocence and sexuality, yes, all of that. It was ready as a kind of shorthand.”

Garret Storms, who’s directing ‘The Nether’ at Stage West, picked up on this aspect of the play. Reading about ‘The Nether’ online, he says, he was intrigued by its provocative nature. But it wasn’t until he read the script that he realized, “It’s like a very haunting fairy tale.” A parable about laptops and pedophiles.

These days, Haley makes her living in LA writing scripts for shows like the Netflix horror series, ‘Hemlock Grove’ — meanwhile, ‘The Nether’ has launched her internationally as a playwright. It won the 2012 Susan Smith Blackburn Prize (for best play written by a woman) and premiered in 2013 in LA at the Center Theatre Group’s Kirk Douglas Theatre. Soon after, it was staged off-Broadway at the Lucille Lortel  — as well as in Madrid, Munich and San Francisco with stagings coming soon in Philadelphia, Washington D.C., and Houston (Haley will be meeting up with family members in Houston to see the Alley Theatre production).

But it was the London show that really got attention — with the acclaimed Royal Court Theatre production moving to the West End and garnering multiple Olivier nominations (the British equivalent of the Tony), including ones for best play, best actor and best supporting actress. Innovative designer Es Devlin created the closing ceremony for the London Olympics, but her digital projections for ‘The Nether’ were truly groundbreaking in theater scenery: They were like watching ‘The Matrix’ live, onstage. And that doesn’t even include the dazzling Victorian house and gardens Devlin devised. It was no surprise when she won the Olivier for best set design. 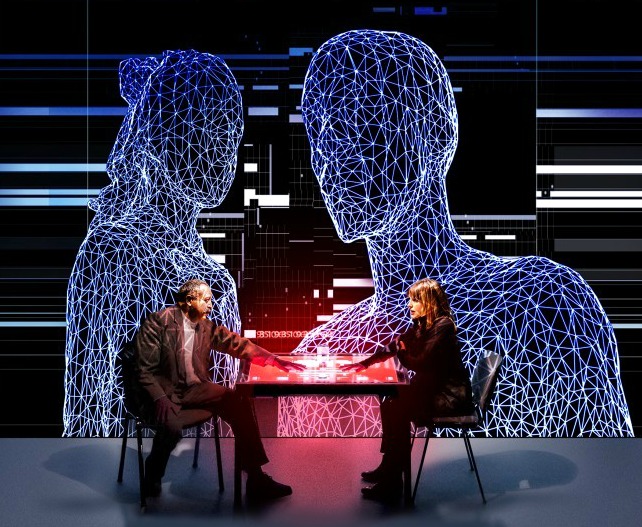 The Royal Court Theatre production of ‘The Nether’ – the digital dazzle by designer Es Devlin won an Olivier Award after the show transferred to London’s West End.

Yet Haley argues that all of this focus on technology — in her background, in her plays and their stagings — has been misleading. In fact, she says she’s looking forward to the first bare-bones staging of ‘The Nether.’ That’s because “I think technology is a medium, but the plays are about psychology and identity and our relationships to each other.”

Haley says, when we create virtual realms we’re really just creating upgraded fantasies, fantasies that we’ll be able to live in, that’s all. And while we may think we create sci-fi fantasies because we like all the cool gizmos and garments, unwittingly, our fantasies often reveal something else entirely.

The human contact we sadly lack – in this reality.