Skip Navigation
Home > ArtandSeek.net > ‘It’s Been Tough’: Dallas Actors With Triplets On COVID, Lack Of Work And The Future

Editor’s note: Reconnecting after a year of separation and loss is a work-in-progress. KERA and The Dallas Morning News are collaborating to document how the pandemic has changed the arts and culture scene in North Texas. The News’ Michael Granberry reports on how two actors turned to new careers after theaters shut down.

Allison Pistorius and Chris Hury are two of Dallas’ most gifted actors. So, it’s jarring to hear Pistorius say she hasn’t been on stage in a year and a half. Nor has Hury, who says he’s “going in a different direction” since being mostly unemployed since March of 2020.

That, of course, is when a global pandemic pressed the pause button on the world at large.

So, when they’re asked a single question — “How has the pandemic affected your lives?” — Pistorius responds with a lusty laugh, worthy of a farce by Molière.

“It’s such a big question,” she says. “There’s not a part of our lives that hasn’t been affected.”

The pandemic has done nothing less than throw their professional lives into disarray. It has taken away their health insurance. It has smacked them in the head with an existential crisis. It has, at times, stripped them of confidence.

Hury has been forced to put behind him such meaty roles as Cyrano in Cyrano de Bergerac and Jeffrey Skilling in Enron. Last spring, he was set to play the role of Flan in Six Degrees of Separation at Uptown Players, the part Donald Sutherland made famous in the film version.

The pandemic killed it. 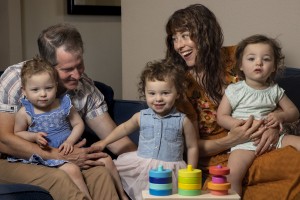 Chris Hury, left, and Allison Pistorius, second from right, play with their two-year-old triplet daughters, Birdie Sue Pistorius Hury, from left, Austen Finch, and Charlie Faye, at their home in Garland. Pistorius and Hury, two of Dallas’ most gifted actors, had their world turned upside down by the pandemic. Hury was unemployed for months after March 2020. Pistorius has worked as a teacher at SMU, but much of that was done virtually. Hury recently got a job teaching in Terrell, Texas, so he is now moving away from live theater. (Lynda M. González/The Dallas Morning News)

Pistorius was to play the title role in Marie Antoinette at Amphibian Stage in Fort Worth. COVID shelved that one too.

Barely four months before the lockdown, she had been a tour de force in Michael Federico’s adaptation of Dracula at Theatre Three. Federico said then he wrote the role specifically for her.

Now, the couple are sharing in the most important roles of all. A playwright writing about the pandemic could not have picked a more engaging drama than the one happening daily in the couple’s Dallas-area home.

Austen, Birdie and Charlie were born on Nov. 12, 2018. They are healthy, happy triplets who were barely a year old when the pandemic hit. When the girls were born, their parents’ medical insurance emerged as a champion, a savior.

All three babies came into the world via a cesarean section, but all three required extended stays in intensive care. Birdie, the smallest, remained in ICU for two months.

The couple’s shared coverage, obtained through Actors’ Equity Association, paid for almost everything. As Hury said in a 2019 interview with The Dallas Morning News, “We didn’t pay a penny,” to which Pistorius added: “The bill for all of it was $24.”

But that was then, and this is now. Like actors all over America who have lashed out angrily at Actors’ Equity because of the hardline position it took in the wake of COVID — shutting down virtually all theatrical productions — Pistorius and Hury have felt the pain.

Actors’ Equity kept them from working but also saddled them with a crippling Catch-22: Because neither could pursue the art form they long ago embraced, each was forced to surrender their health insurance. And why?

They weren’t working enough to qualify. So, when it came to medical coverage for a family of five, they got canceled.

Despite Hury being unemployed and Pistorius teaching part-time at Southern Methodist University, they had to buy private insurance.

That was by no means the only problem.

“You can hear our children,” Pistorius says. “We have three toddlers who haven’t been able to go to day care, who we have to find child-care for and make sure there’s always somebody here to care for them.”

The one silver lining he loves, Hury says, “is that I’ve been able to spend a lot more time with my kids. Doing a show, tending bar, those things were taken off the table.” 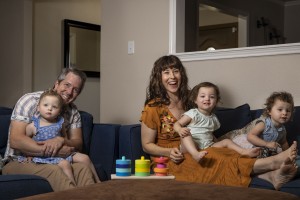 Chris Hury, left, says being unemployed during pandemic has been tough, but being able to spend more time with his triplets — Birdie Sue Pistorius Hury, from left, Austen Finch, and Charlie Faye — has been a silver lining. His wife, Allison Pistorius, says this is the longest she’s gone without an acting job in more than a decade. (Lynda M. González/The Dallas Morning News)

The triplets are sleeping well at night — now. But Hury says it took hiring a sleep consultant to give the girls’ parents the sleep they needed.

He had a job for a while with a logistics firm, which, because of the pandemic, was forced to do layoffs. His was one of the jobs cut. Last month, Pistorius put out a plea on Facebook saying her husband was looking for a job and “willing to learn a new industry and skill.”

“Everything else I have not loved. It’s been tough,” Hury says. “And I’ll be honest. It’s been depressing and anxiety-ridden, and now that we’re finally coming out of it, things are different” — different meaning a whole new direction.

Why there are ‘no rules anymore’

Hury recently took a teaching job in Terrell, at Furlough Middle School. He’s sharing his mastery with adolescent kids in the austere setting of a performing arts center named for Oscar-winning actor Jamie Foxx, who hails from Terrell.

Dana Schultes, executive producer of Stage West Theatre in Fort Worth, appeared alongside Hury in The Lifespan of a Fact in November of 2019, less than four months before the lockdown.

“When all of this started,” Schultes says, “one of my very first thoughts was, how many people in theater are we going to lose? Because their source of income has suddenly dried up. And they’re forced to go and find another career.”

She calls it “a great tragedy” to learn that Hury is one of the losses.

“He’s one of North Texas’ most solid actors. I’ve had the pleasure to work with him on stage, and produce shows that he’s in, and to know that he’s suddenly off the list of people that we can turn to is, well, frankly, it’s tough,” Schultes says. “And it’s a loss not only for Stage West but also the theater-going community.”

Schultes has also worked with Pistorius, who, along with Hury, are “some of the very favorite people” her customers say they most want to see on stage.

Pistorius is teaching drama at SMU’s Meadows School of the Arts. This, she says, is the longest she has gone without an acting job in more than a decade.

She did, however, recently appear on the national TV game show, Jeopardy! She and Hury have loved the show since they started dating.

They met at a party in 2012 and in 2014, appeared at Circle Theatre in Fort Worth in David Ives’ Venus in Fur, which, with them sharing the stage, crackled with sexual tension.

“In fact, it was during a Jeopardy! episode,” she says, “that Chris first told me he loved me.”

Hundreds of thousands of people vie each year for a spot on the show, but only 500 make the cut. Pistorius finished an impressive second on her episode and came away with $2,000 — which, of course, was a nice thing to have.

The pandemic “has affected us financially. Weirdly enough, it’s also been such a big reminder to be grateful for the good things. We have three healthy children. My father died this year,” she says, “but it wasn’t because of COVID. It was something else. But I’m grateful for the time I got to spend with him. I’m grateful that my mother is healthy. There are things that I’m really, really grateful for.”

Despite the trauma, there are silver linings, most of which come down to single words: Zoom. Streaming. Geography.

If Pistorius and Hury are hopeful about anything, it’s that the post-pandemic theater world may become something it’s never been before — truly international. In recent weeks, they have found themselves watching, on their television at home, Britain’s acclaimed National Theatre, live from London.

In the case of the Netflix production Springsteen on Broadway, and the Disney rollout of Hamilton, the theater world has demonstrated that it can stream shows to a worldwide audience without compromising quality or minimizing reach.

So, what’s to keep someone in London from watching a play performed at Stage West, which is based in Fort Worth?

“There are,” Pistorius says, “no rules anymore. I think that’s one thing the pandemic has taught us: If you want to do something, go do it. The silver lining that I hope sticks around is streaming. I mean, talk about accessibility. And to be honest, we should have been there 10 years ago.”

She loves the idea that “you don’t have to live in New York City or Los Angeles to have access to work.”

And yet, the theater world moves glacially, like the ancient art form it is. As T.S. EliotCQ once said, “Between the idea and the reality falls the shadow.”

And for all too many gifted actors, struggling to recover from the tsunami of an ongoing pandemic, life is still being lived largely in the shadows, as Pistorius and Hury know all too well.