Skip Navigation
Home > ArtandSeek.net > Lost In The Fog At The Nasher 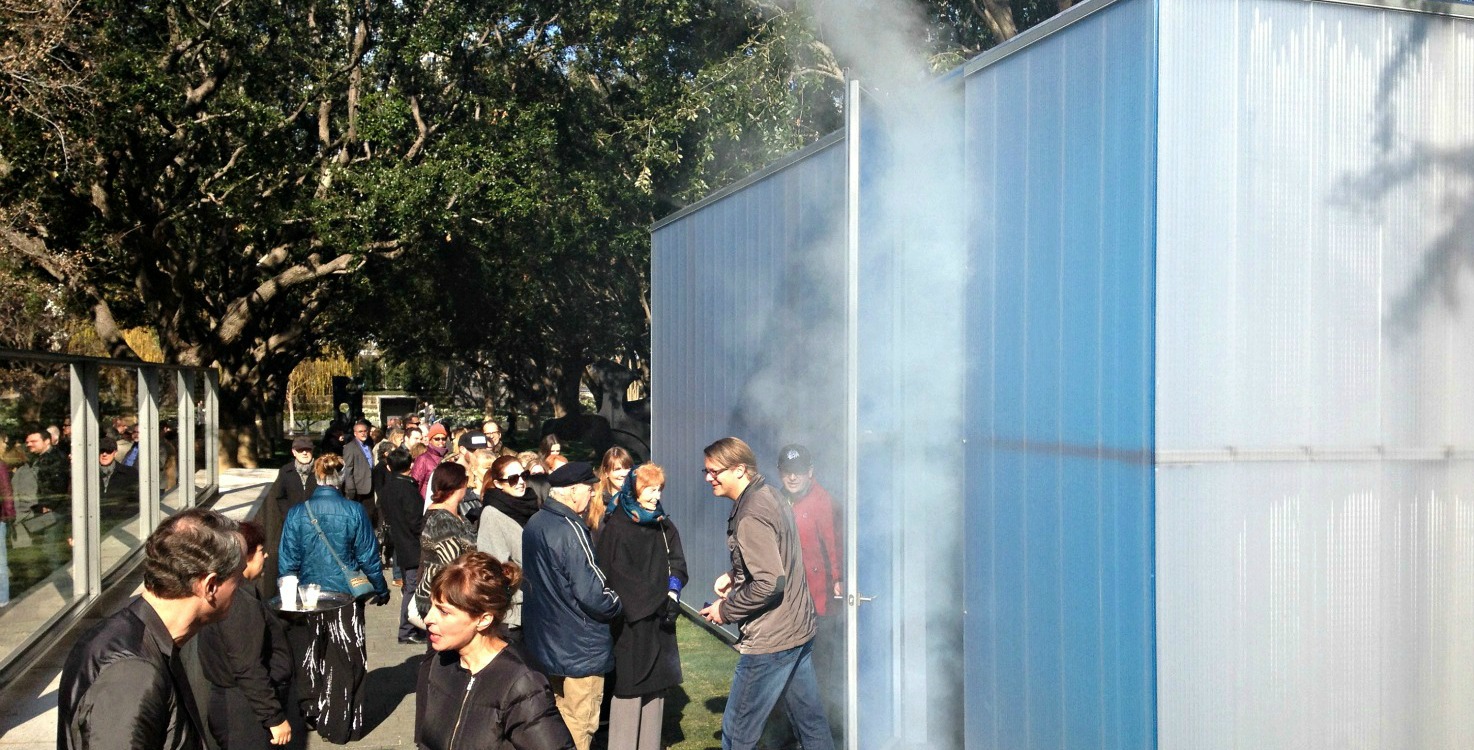 The Nasher Sculpture Center has an artwork that actually makes it hard to see much of anything. That’s because it surrounds you with fog. It’s part of the first solo show in the US by Belgian artist Ann Veronica Janssens. KERA’s Jerome Weeks often feels in a fog. So he went to check it out.

Ann Veronica Janssens at the Nasher Sculpture Center through April 17, 2016.

From the outside, the sculpture, called ‘Blue, Red and Yellow,’ looks boring. The pavilion at the Nasher is roughly the size and shape of a big shipping container, the kind trucks use — about thirty feet by fifteen.

But the walls and ceiling aren’t steel. They’re made of sheets of translucent plastic — sheets of plastic colored blue, red and yellow. And when you open the door to go inside, you step into a dense fog.

It’s like a steam-filled sauna but there’s no heat. There’s only fuzzy sunlight, dappled with shade from the trees along one side filtered with colors from the plastic panels. Five or six visitors are admitted at a time, and in the blue mist near the door, they vanish. Walking around inside, you also are cut loose, adrift in colored space. You can feel the comforting solidity of the metal beams holding up the walls (ping, ping), but you can’t see much beyond your outstretched hand, the one rapping on the beam. You can’t even make out the flooring directly under your feet.

Greg Sunmark visited when the exhibition opened Saturday. He compared the experience to a giant, sensory deprivation tank: “I kinda went out in the middle of it, and the colors didn’t change as much. And then I walked around and tried to touch the wall and the colors got more vibrant, the more you approached the wall. It was really surreal. I don’t know how else to describe it. It was like blindness — but in a beautiful way.”

In the fog inside the pavilion, you hear people’s footsteps and rustling clothes but you see them only when someone suddenly looms up inches from you. Both of you laugh nervously. Other people sound far away, but it’s hard to tell. The entire space seems at once pressing close to you but also vastly larger than it should be.

“OK, well, if you head this way,” a man tells someone along the blue wall.

“Well, this is an interesting experience,” someone else, perhaps his wife, replies.

“Where’s the door?” he demands.

“Where do you think?” she responds

“Oh yeah,” and it sounds as if he’s grabbed the door knob.

“Thank you so much!” says the older woman — and they’re both gone, a burst of light over there, a burst that’s immediately cut off.

“It is disorienting for many people,” says Ann Veronica Janssens, “because you lose your limits.” 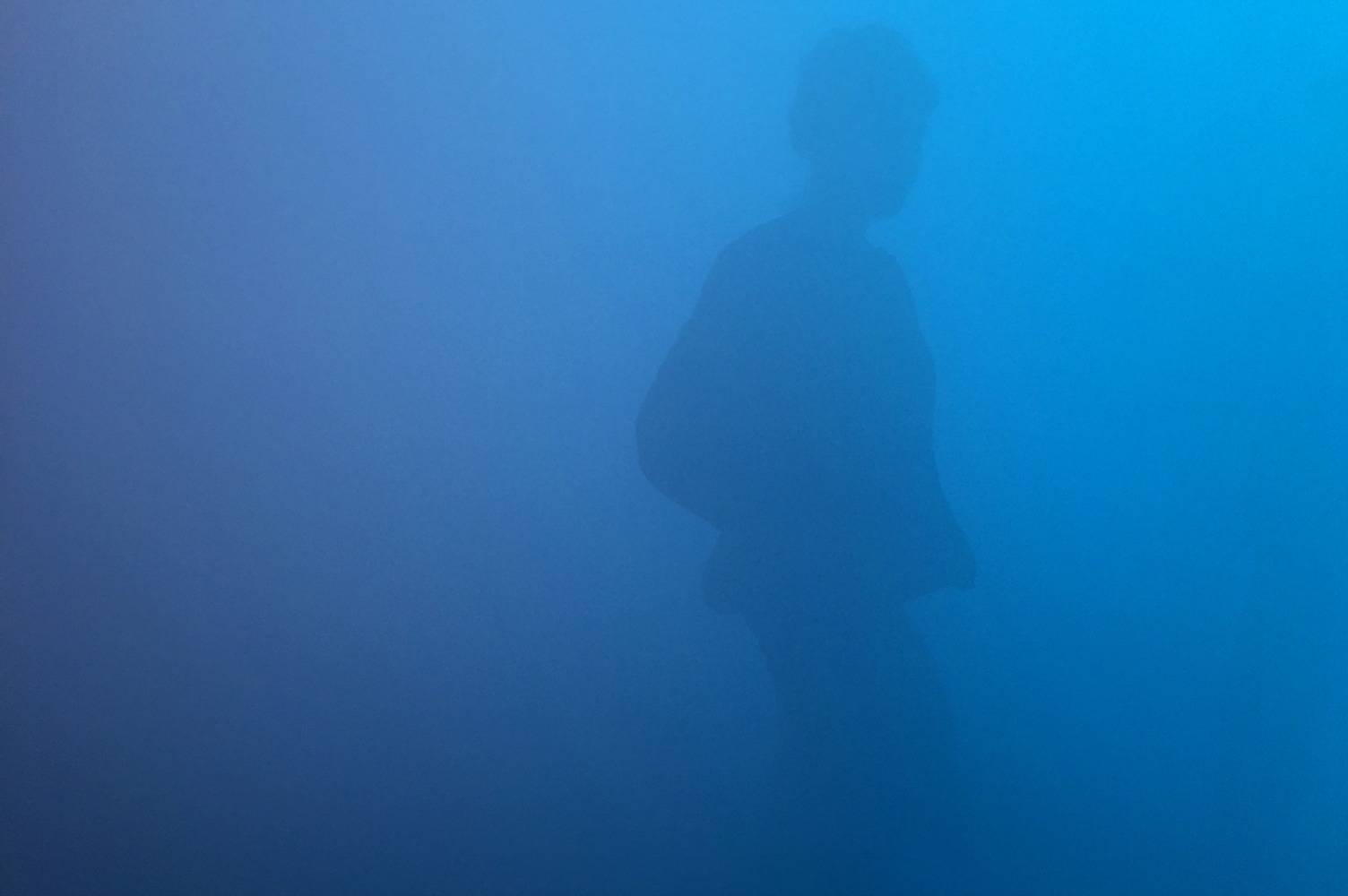 The Belgian artist is small with a small, whispery, accented voice. She says that disorienting visitors to her Pavilion is not really the goal. Janssens views her artworks as experiments in physics. Her aim is for people to experience light and color as three-dimensional things. Other artworks of hers at the Nasher play with reflections, transparency, prismatic effects.

“My main material is light and space,” she says, “how can I make sculpture with light, how can I give materiality to it.”

This is not the first time the Nasher has presented a work that resembles a fun house attraction. Five years ago, British artist Martin Creed filled the downstairs gallery with orange balloons. It became one of the more popular works hosted by the Nasher — it provided a similar immersive experience, turning the air around us squeaky and rubbery.

Janssens admits the fog-filled Pavilion is not an experience for claustrophobes. But then, they often take one look at it and decide not to go in. What you step into is a thick, artificial mist created by a machine, the MDG 3000. It’s on a timer; you may hear it kick on with a hiss and a hum. The misting machine uses a non-toxic mineral oil, what the entertainment industry calls “fog juice.” Janssens says the MDG 3000 is an industry workhorse; it’s been used for years in stage shows, rock concerts and movies about vampires in love.

Erika Jaeggli walked through the Pavilion Saturday: “It was a little bit unnerving at first but then once I let myself experience it, just the idea of having sculpture physically surround you, and you’re breathing it in, and it’s on your eyes and your skin, it was just really, really remarkable.”

Or, as another person put it – this was someone, over there somewhere, far away in the fog: “Hey. This is kinda wild.”