This week on “Frame of Mind,” Art&Seek and the Video Association of Dallas bring you “Serving Second Chances,” a documentary by Alan Governor that peels back the stereotypes to show you the real people behind the city’s homeless and at-risk population. The film follows Gerald Williams, a musician whose crack addiction ruined his career; Alisa Flores, a victim of an abusive relationship; and Velietta Dickens Rogers, a rape survivor who contracted AIDS. Tying them together is The Stewpot, a safe haven that provides resources for the homeless and at-risk individuals of Dallas.

As Governor told Art&Seek, The Stewpot, and the movie, are all about second chances.

“The movie is about people who are trying to transform their lives,” says Governor. What I often describe the movie as now is an unlikely story of unexpected opportunities. In adversity, there are opportunities.”

From assault to art 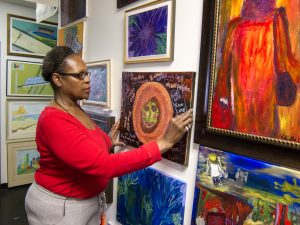 As a victim of sexual assault in the 90’s, whose rapist gave her AIDS, Velietta Dickens Rogers felt like her life was over. Suffering from post traumatic stress and overwhelmed by emotion, she had to stop working. Then she stumbled upon The Stewpot — and the Open Art Program, founded by local artist Pamela Nelson.

Rogers was afraid to even go to the store without her son or one of her brothers escorting her. But with the art classes, she emerged from her house and began to fear less.

“This is my first step,” she says in the film, smiling. “Of coming out of my house, finding a new life, in which this new life that God has given me revolves around art.”

Cynthia Brannum, director of the program, says that since she started in 2005, they’ve sold about $200,000 worth of artwork. According to the program’s website, 90% of the proceeds go back to the artist, with 10% going towards supplies and field trips.

What the artists learn, Brannum says, is to challenge the emotions that they experience in difficult times into their artwork.

“When they get into really sticky times,” she says, “it’s the calming effect and tranquility that they find in their work.”

For Rogers, finding the art program was transformative.

“Without this art program, I don’t know if I would have made it.”

Listen to a 2015 episode of Think featuring Alan Governor and Bruce Buchanan, Associate Pastor of Community Ministries at First Presbyterian Church of Dallas, which runs the Stewpot.

Alisa Flores lived in Georgia most of her life. When she got into an abusive relationship, she escaped to Dallas, entered a home for battered woman, and, eventually, ended up on the streets.

At the film’s outset, she’s leading an orientation, teaching other homeless how to get paid to sell copies of StreetZine, Stewpot’s newspaper, founded in 2003.

The papers go for a dollar each — when passerby bother to stop. In the film, Flores stands at a street corner, reaching out to people who rarely look at her. Her response is measured: every time, she waits a moment, says okay, and reaches out to the next person. Eventually, though, some people do stop.

“It’s hard to sell these papers because sometimes your feelings get hurt,” she says. “You have to have a lot of patience. This is a patient job.” 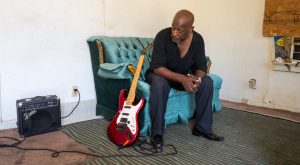 At the Austin Street Center, Gerald Williams was able to start playing the electric guitar again.

Gerald Williams was a crack cocaine user living on the streets. He was sleeping and bathing in front of city hall, hardly eating and embarrassed. Every dime he made, he’d spend on drugs. He couldn’t see a way out. He says that was rock bottom.

Then he found Austin Street Center, a homeless shelter founded by The Stewpot. Everything changed for him.

“I’m able to shower,” he says in the film. “I have a cot here that I sleep on. I eat three to four times per day. Sometimes, I eat so much I have to turn down food.”

And he started playing electric guitar again, an instrument he’d learned to play decades earlier, when he was 12. He performed with a local church choir when they visited the Austin Street Shelter’s chapel and then stayed on with them. He also started playing in Deep Ellum.

“I sit down and play guitar, and so many people down there have reached their arms out to me.”