Some of the best examples of the Art Deco works created for the 1936 Texas Centennial Exposition are the statues of women you’ll see as you make your way through the fairgrounds.

We know it’s hard, but before you go rushing off to buy your first corny dog, take some time to really look around and notice the art that made Fair Park…well, Fair Park. I spoke with author and Texas history scholar Steven Butler, to learn more about the statues. Butler has done extensive research on Fair Park and frequently gives tours of the fairgrounds.

Look for these “Fair Ladies” as you enter the front gates and on your walk up the Esplanade. 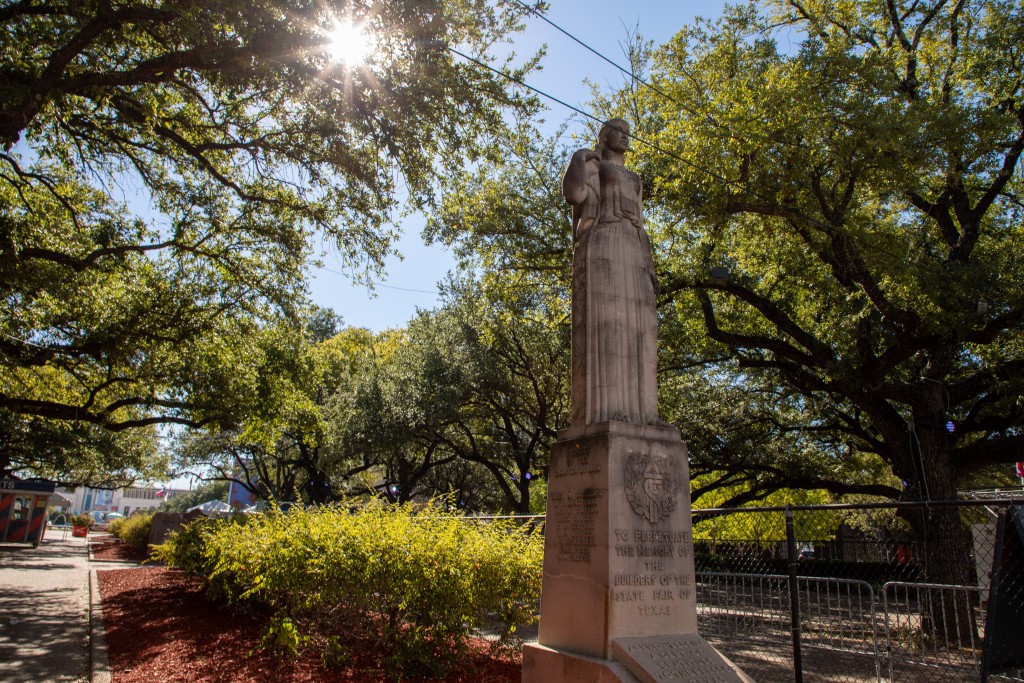 As you make your way through the front gates of Fair Park be sure to look for the Founders’ Statue. Photo: Keren Carrión/KERA

The statue of a young woman in a long flowing dress sits just inside the front gates in the grassy area on the right. If you’re not looking, you’ll walk right past her. She’s hiding behind a tall police stand.

The Founders’ Statue was designed by Raoul Josset and sculpture by Jose Martin. The two Frenchmen were among the many artists who transformed Fair Park into an Art Deco Wonderland for the 1936 Centennial.

She was created as a tribute to the fair presidents from 1886 to 1938 who made those first fairs in Dallas a reality. And she also honors the press for its role in supporting and publicizing the annual event.

She was meant to be unveiled at the 50th anniversary of the fair in 1936, but that date coincided with the Texas Centennial Exposition–the 100th anniversary of Texas’s independence from Mexico. Because of the hubbub surrounding the Centennial celebration and the Pan Am Exposition a year later, the statue’s dedication was postponed to October 8, 1938.

One more little tidbit about this lady–when she was dedicated in 1938 she was also made into a time capsule of sorts. Headlines from 300 newspapers were put in a crypt at the base of the statue with plans to open it 50 years later on October 8, 1988.

“In 1988, whoever was in charge of the reopening, opened the crypt a little early just to double check,” said Butler. “And they found a mass of crumbling newspapers that had turned to dust. They were going to have a rededication ceremony and I heard that it got cancelled on that account because the newspapers were no good.”

2. Spirit of the Centennial 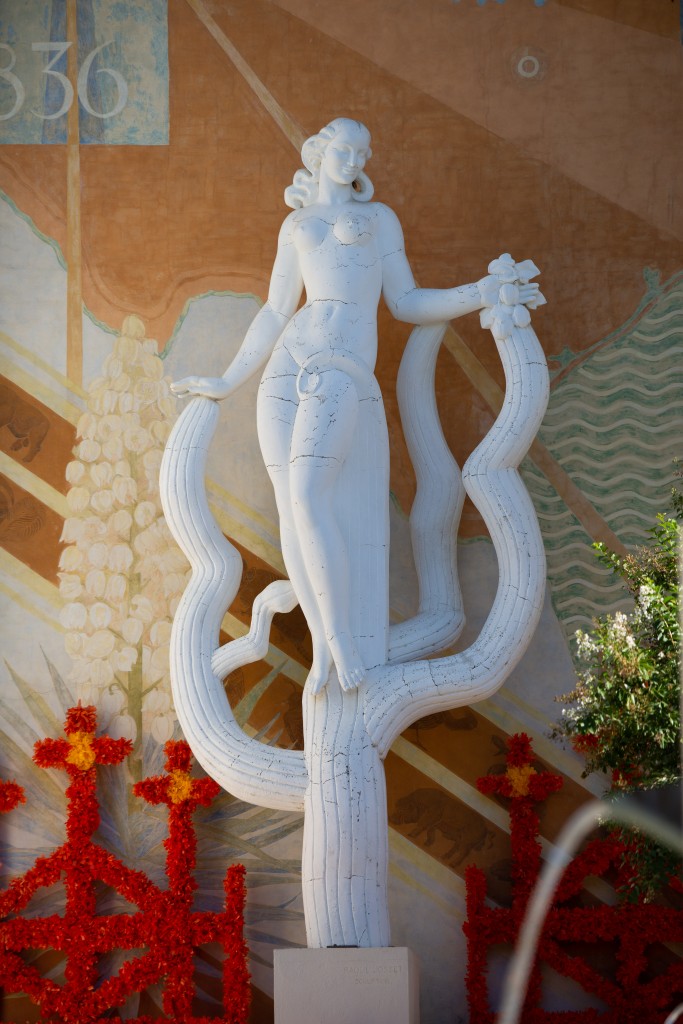 The “Spirit of the Centennial was the first artwork executed for the Texas Centennial Exposition. Photo: Keren Carrión/KERA

This statue is the centerpiece for the Women’s Museum Building, which is located on the left just after you enter the front gates.

The twenty-foot statue of a nude woman was inspired by Botticelli’s “The Birth of Venus,” and like the Founders Statue, she was also designed by Raoul Josset and sculpted by Jose Martin.

Butler points out a minor inconsistency in the work.

“It features a girl standing on a Saguaro cactus and that’s interesting because Saguaro cactuses aren’t found in Texas. Raoul Josset, being from France, probably didn’t know that. He probably thought, ‘Well, a cactus is a cactus.’ He didn’t realize they don’t grow in Texas.”

Saguaro cactuses might not be native to Texas, but the model who posed for the statue definitely was. Georgia Carroll grew up in East Dallas and was a 1937 graduate of Woodrow Wilson High School.

In case you were doing the math, Carroll was still a teenager when the statue was created.

“In an interview she did years later she said being only 16 at the time, she only posed for the head,” Butler said. “It’s not known who posed for the body.”

3.  The Six Ladies Of Texas 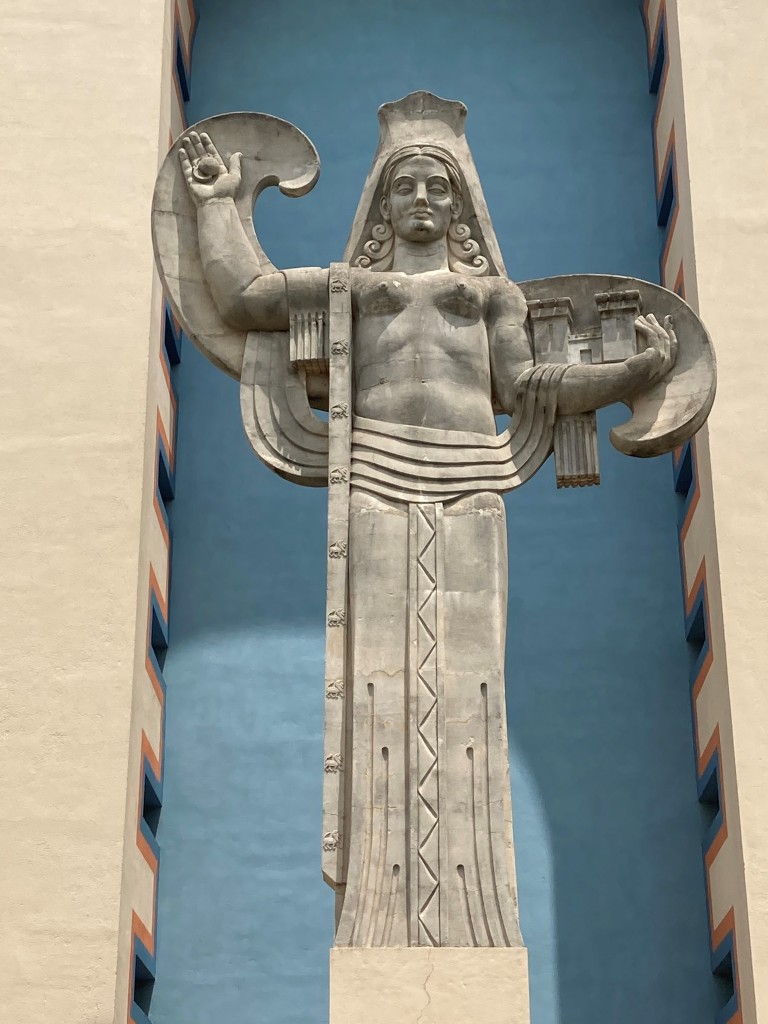 The female statues along the Esplanade represent the six flags that have flown over Texas. Photo: Therese Powell

Take a walk up the Esplanade and outside the Centennial Building and the Automobile Building you’ll see six 20-foot concrete statues of women. Because of their size, you really can’t miss them, but maybe it’s never clicked that each of these ladies represents one of the six flags of Texas.

Outside the Centennial Building is “Spain,” “Confederacy,” and “Texas.” These statues were created by American sculptor, Lawrence Tenney Stevens

On the opposite side of the Esplanade in front of the Automobile Building, sit “France,” “Mexico,” and “United States.” They were made by the French-born American sculptor Raoul Josset.

At first glance, the ladies resemble one another, but if you look closer you can see subtle differences that reveal each artist’s style. Josset’s statues have curls, curvy figures and appear more, well…French. Steven’s statues have a more block-like Art Deco appearance.

The ladies all feature elements unique to their respective “flags.” “Spain” has a mantilla and carries castanets, “Confederacy” wears a crown with seven stars that represents the first seven states that seceded from the Union, and “France” holds grapes which is a nod to the country’s wine industry.

All of the statues were created from the artists’ imaginations save one.  Helen Ramsey, a 16-year-old Centennial Rangerette, posed for Stevens’ statue, ‘Texas.’

“Contralto” points the way down the Esplanade at Fair Park. Photo: Keren Carrión/KERA

Down at the end of the Esplanade overlooking the reflecting pool you’ll find the silver-finished bronze “Contralto” and her male counterpart, “Tenor.”

Unlike the other statues on the fairgrounds, “Contralto” seems to be without symbolism, a link to Texas history or even a backstory. Some speculate the two statues could have served as markers for the musical performances that took place in the plaza near the Hall of State during the Centennial in 1936.

The figures in place now are not the originals. Their story is similar to that of the Woofus —the quirky composite animal that sits near the swine barn. “Contralto” and “Tenor” were created by Lawrence Tenney Stevens, and like the Woofus, after the run of the Centennial they were taken down and mysteriously disappeared.

Thanks to a bond package, sculptor David Newton was able to recreate the pair through photographs of the originals. In 2009 “Contralto” and “Tenor” were reinstalled to their former place of glory.

It goes without saying that you can see these ladies during the State Fair of Texas, which runs through Oct. 17. But it’s also fun to visit Fair Park during the off season. You’ll be able to get a better look without being rushed or distracted by a corny dog.