Edith Baker was a major figure in shaping and promoting the North Texas arts scene and a significant link to its first, prominent circle of modern artists in the 1950s. The founder of the Dallas Art Dealers Association (DADA) died early Sunday of natural causes. She was 97. In addition to DADA, which began in 1985, Baker established EASL with Patricia Meadows in 1992. The Emergency Artists Support League is a non-profit that provides financial assistance to North Texas visual artists in dire need — a service that became particularly crucial during the past year. 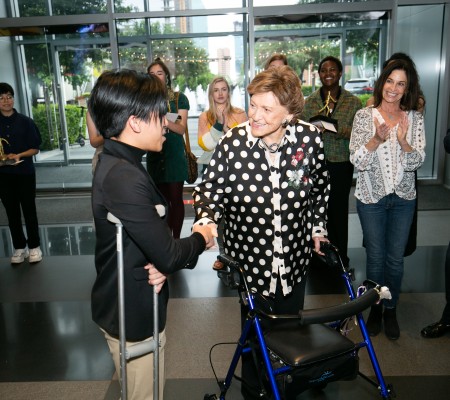 In Dallas in the ’50s, Baker was actually continuing her studies in art — she’d already gotten a bachelor’s degree in art from the American College in Bulgaria, her native country, and had studied at Chicago’s Art Institute. Art had been an interest of hers since childhood. In taking classes at the Dallas Museum of Art, Baker joined the city’s groundbreaking coterie of contemporary artists, including Jerry Bywaters, Octavio Medelliín and DeForest Judd.

Baker came to Dallas because her husband, Fred, moved here for his work. The two had married after World War II. During the Nazi invasion of Bulgaria, Baker and her Jewish family were forced to flee Sofia, the nation’s capital, and hide in the mountains. Fred Baker had come to Eastern Europe from the U.S. to help settle Bulgarian Jews in Israel — and Edith was assigned to help him as a translator. The Bakers were married in Israel and moved to Chicago in 1949.

The subsequent move to Dallas did not prevent Baker from continuing to study painting and art history  — in France, Portugal and Mexico. Baker and her husband returned to Dallas in 1963, when she established her own studio and then taught “Understanding Modern Art” for 15 years at Temple Emanu-El.  In 1977, she was partners in opening a new gallery, the Collector’s Choice, dedicated to the works of contemporary Texas artists.  She’d already received the Legend Award from the Dallas Visual Arts Center (now the Dallas Contemporary) — and within a few years, the gallery had become the Edith Baker Gallery.

In 1985 came the creation of DADA — which in 2005, with the backing of Baker’s family and friends, established the Edith Baker Art Scholarship Fund, which benefits seniors at Booker T. Washington High School for the Performing and Visual Arts. In 2018, the Craighead Green Gallery  presented a retrospective of her artworks.