Barry X Ball: Remaking Sculpture is at the Nasher Sculpture Center through April 19, 2020.

For his Masterpieces series, Ball looked to classical works, recreated using an array of state-of-the-art technologies.

Take the Hermaphrodite Endormi, an ancient Roman, marble sculpture of the androgynous child of Aphrodite and Hermes.

“It’s a piece from the Louvre that has been worked on for almost two millennia by multiple artists,” Ball said.

Ball used high-resolution, 3D scanners to extract every microscopic detail from the work. Every groove, dent and imperfection is captured in a digital model of the original sculpture.

Ball then picks a huge slab of stone that matches the mood of the piece. A soft, translucent pink onyx from Iran was perfect for a sensual recreation of the Sleeping Hermaphrodite. 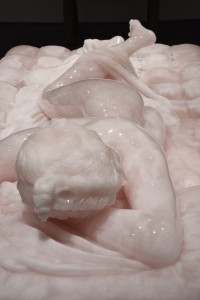 Because the United States doesn’t have a trading relationship with Iran, Ball went to Italy instead.

“Italy does get stone from all over the world, and I do my stone shopping there,” Ball said.

Ball’s team then takes the digital file they’ve created to guide the first draft of the work.

“The data drives computer-controlled, stone-carving machines that use diamond and carbide bits that slowly mill away a rough version of the sculpture,” Ball says. “Then, we take it from there.”

Hands do the rest of the work. Ball says his team spent over 10,000 hours refining Sleeping Hermaphrodite.

“The Italians call them sottosquadro,” Ball said. “The undercuts. The deep passages. All of the sharp ‘innies’ on the sculpture. Then, the polishing obviously.”

The works in the Masterpieces series form only half of the show. In his Portraits series, Ball uses plaster casts of himself and others to similarly transform stone into haunting, dramatic forms.

Ball says that while technology enables him to recreate these masterworks, the actual programming is far from easy. 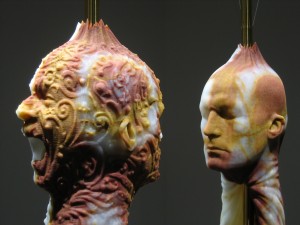 “There’s no pressing ‘print,’ and the thing pops out,” he said, “It’s a long, laborious, slow process. If you go faster, you’ll chip the stone. Everything is flooded with water during the process to cool, lubricate and keep the dust down.”

Ball says most of the large works in the exhibition took about five years to make.

You can see them all at the Nasher Sculpture Center through April 19.