When ‘Roxanne,‘ Steve Martin’s sweet-spirited updating of ‘Cyrano de Bergerac,’ opened in cinemas in 1987, French critics were bewildered. Over here in the states, the film was greeted with delight: Martin won a best screenplay award from the Writers Guild and a best actor award from the National Society of Film Critics.

Cyrano, of course, is the swashbuckler who deftly dices an opponent’s outfit with his rapier while composing a witty poem on the spot. He’s a man who mocks his own elephantine proboscis more inventively than any enemy can. He’s a delight, sans doute — while his heart secretly aches for the beautiful but uninterested Roxanne. Just as Martin does in the film.

But … toutefois, the French objected, Martin’s Cyrano doesn’t die in the end. He doesn’t spend 15 years faithfully hiding his love from Roxanne. It would spoil her idealized image of the dead Christian, the young dolt-cadet she did love, the young cadet who was so language-challenged Cyrano had to ghost-write his love letters for him.

So the French critics gave Martin’s film a typical round of weary Gallic shrugs at American obliviousness. We completely missed the play’s essential, chivalric gesture, the one that seals Cyrano’s fate as grand and foolish and self-sacrificing. Without the heartbreak — the end-of-life realization by both Cyrano and Roxanne they’ve been blind about who’s loved whom and why — without that, the story ends as if Rick in ‘Casablanca’ happily hopped on board the plane with Elsa and fled the Nazis. Sure, they’d make a cozy twosome, but he’s kind of abandoning the French Resistance, isn’t he? Our hero is not exactly the stoic, noble guy Elsa thought he was. Where’s that last stab of idealistic martyrdom — the one that makes all the wisecracks and unrequited love truly galante? 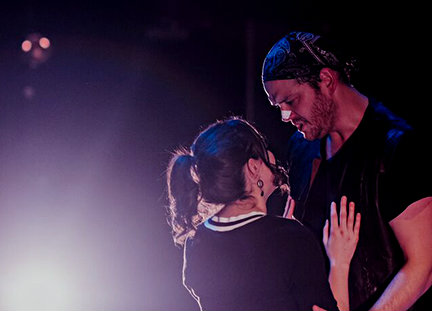 For its season opener, Amphibian Stage Productions is offering the world premiere of a new adaptation of ‘Cyrano’ by Jason O’Connell and Brenda Withers, and yes, it most certainly does include that dying, sentimental flourish from our hero. That doesn’t mean it includes everything else in playwright Edmund Rostand’s galloping warhorse of a crowd-pleaser. It’s not designed to. This is a pocket-watch ‘Cyrano,’ geared down to just five actors and the basic plot machinery of the play.

Which is a shrewd idea, actually. In theory, anyway. Rostand’s 1897 play is often called a warhorse and a crowd-pleaser (is that an echo I hear?). But it’s really not produced that often: In more than 50 years, the Dallas Theater Center has staged it precisely once (whereas they’ve staged that rambunctious romp, ‘Julius Caesar,’ six times). ‘Cyrano’ can be an almost operatic epic. Rostand lists more than 40 roles in his cast of characters — not including the unnamed brigades of “cadets” and “pastry cooks.” The last, large-caliber ‘Cyrano’ I sat through (an outdoor version) boasted 27 actors and seemed intent on slogging through every minute of the Siege of Arras – where the historic Cyrano actually fought in 1640.

Instead, O’Connell and Withers have created one of those stripped-down and updated classics. These modern-dress shows — usually of Shakespeare plays — generally offset their bare-bones casting budgets with a comic ‘theatricality-of-necessity.’ Actors madly fill different roles by donning and dropping accents or wigs, whole scenes are reduced to quips, stage devices are employed with a wink. These versions proudly show us all the amusing stage toys that live actors can employ – even without spectacular sets or silken costumes. And then they still wound our hearts.

That’s the plan, at any rate. But unlike our hero’s precision-targeted aim with an épée or an aperçu, this new, miniaturized ‘Cyrano’ is hit or miss. O’Connell and Withers reduce Rostand’s play to its essentials (even the title, you may notice, has gotten a nose job: just ‘Cyrano’). But they don’t offer enough élan to make up for the loss of splendor and sub-plots. They don’t lend this ‘Cyrano’ the zest any ‘Cyrano’ needs (the direction is also by O’Connell). An actor will flip up his shirt to make a shawl, shifting from cadet to crone, but that’s the level of ingenuity here. Set designer Seancolin Hankins’ adaptable, mini-tabletop and a lovely blizzard of love letters are isolated high points of stagecraft. 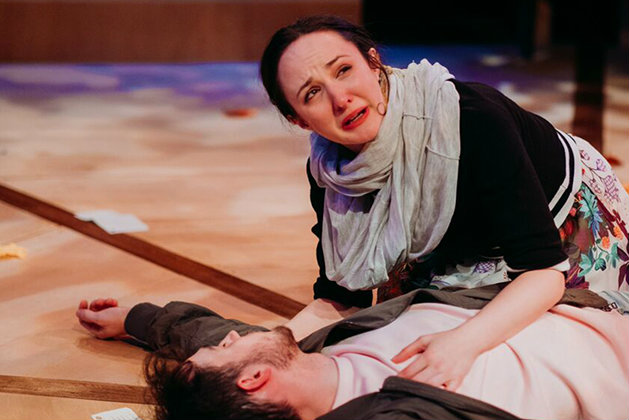 Kate Hamill as Roxanne and Mitchell Stephens as Christian in ‘Cyrano.’

What’s truly odd, though, is that, even as they simplified the play, the playwrights complicated it with a frame story. We do not open in Paris in 1640. We’re in the present, with actors and stage hands getting a show underway. We seem to be in another of those ‘rehearsal’ productions (the John Gielgud-Richard Burton ‘Hamlet’ is perhaps the most famous) where actors in street clothes will pick up a prop or coat and become a character. Instead, an onstage accident happens — and the ‘Cyrano’ that unfolds is the concussion-induced fantasy of an ordinary lighting rigger (John-Michael Marrs).

Two related problems here. The preamble is awkward and hasty; we don’t learn enough to care much about the head trauma. And because we don’t know much about ‘Sparky,’ his subsequent dream feels unmotivated, disconnected to everything else. Did our stage hand, like Cyrano, have a secret crush, in this case on the lead actress (Kate Hamill)? Hence his dreams of acting with her? Or was he like Bottom from ‘Midsummer’ — always wanting the starring role? Or has he been self-conscious about his nose all this time and has come to identify with Monsieur de Bergerac?

We never know. So the framing device doesn’t add much; it mostly just sets up the simple, modern-dress nature of what follows. Which is a pretty weak function. A play speaks to us today — is ‘relevant’ — not because of costuming. It comes from emotional identification. And when it comes to identification, a frame story that turns all the characters into dream figures tends to distance and ‘de-materialize’ them. We’ll return to that issue in a moment.

More immediately, the device stalls the real start of Rostand’s story. Too bad, because as epic as a ‘Cyrano’ staging might be, it always needs to feel like its hero: light-footed and smart, a bit wry and world-weary perhaps, the way a French veteran might feel who’s still up for a good-hearted, late-night brawl against 100 men all at once.

Yet this streamlined little production would seem custom-made for just this sensibility. Trouble is, as Cyrano, the actor John-Michael Marrs has the size and the lumbering physicality of Vince Vaughn. For all his ‘hunky workman’ qualities, he doesn’t exactly dash, physically or verbally. The play’s famous comic set-pieces — Cyrano’s aria of nose insults, the take-down of the insolent actor Montfleury in mid-performance — never take wing. Marrs delivers them like an angry slugger, not a master swordsman confidently flicking away flies.

Where Marrs excels in humor is where O’Connell and Withers’ script excels: handling the idiots, notably Christian (Mitchell Stephens) and the Count De Guiche (Greg Holt). This Christian is so inept expressing his feelings, he resorts to describing the aching “blobs” in his chest. Marrs’ Cyrano is most amusing in his withering disappointment with this rival who, if it weren’t for his looks, would barely exist, a young man, however likable, who has little grasp of everything noble and French that Cyrano stands for: manly confidence, taste, physical grace, deep emotion and, of course, poetry flowing from his fingertips.

As the third part of this triangle, Kate Hamill’s Roxanne strikes one as too mature a woman, too sensible, to swoon so thoroughly over a cute-faced cadet she’s seen just once and not even spoken to. And if she spoke to him for two minutes, she’d quickly realize she’s plumbed everything his shallows have to offer (which is what almost happens, after all).

So we have some early credibility issues with this Roxanne. But once you get Hamill in a room trying to escape the pompous and lustful de Guiche, she’s delightful. Pluck and irony suit Hamill beautifully. Holt’s de Guiche proclaims how heroic he’ll be, headed into battle. She flatters him by encouraging him to just go off and die, please. “I may never come back!” he warns. “Wonderful!” she coos, avoiding his clutches once again. 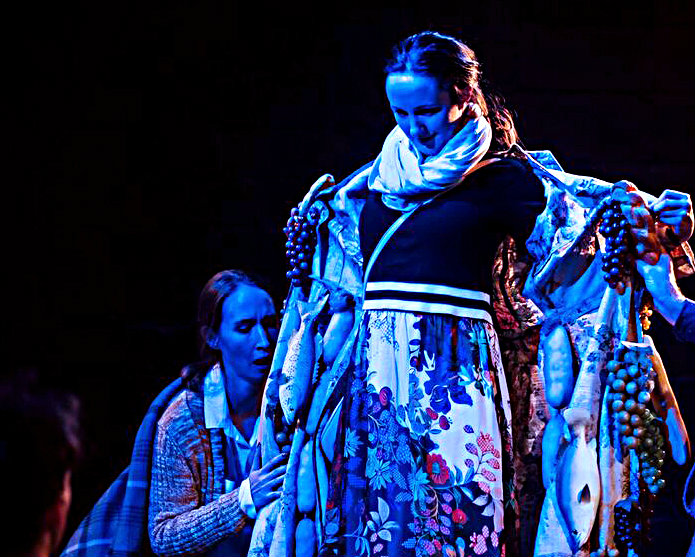 Delivering the goods: Anastasia Munoz and Kate Hamill in ‘Cyrano.’

A New York-based performer and playwright, Hamill is best known for her stage adaptations of Jane Austen’s novels. One of Hamill’s chief motivations in these projects has been to generate more (and more satisfying) stage roles for herself and female performers like her.

It’s probably deliberate, then, that her Roxanne reminds us that the character is one of the surprisingly ‘forward-thinking’ aspects of an exuberantly backwards-looking romance (Rostand wrote the swaggering ‘Cyrano’ partly to counter the gritty realism of Ibsen and Zola). Roxanne may be positioned as the conventional ‘love prize’ desired by two men. And, initially, she seems as shallow and immature as Christian, adoring him for his looks while keeping the worthier Cyrano locked up in the dreaded ‘boyfriend zone.’ He’s the favorite confidant who is essentially sexless to her.

But if it weren’t for the iconic figure of Cyrano blocking the sun, Roxanne might be recognized as one of the feistier, more independent female roles in Victorian theater. True, she’s no door-slammer like Nora (Ibsen’s ‘A Doll’s House’ premiered 18 years earlier). But in the play, she’s never rescued by any man — she dispatches de Guiche on her own — and then it’s she who rescues the starving Christian and Cyrano on the battlefield. A pretty gutsy feat for the time.

Admittedly, the other reason Roxanne isn’t remembered as a model of the ‘modern woman’ — other than Cyrano himself — is that by the end, she turns thoroughly conventional. Literally. She joins a convent. You can’t get much more modest and orthodox. But the spirited, resourceful, even exultant Roxanne is Hamill at her most winning and convincing.

Equally unfortunate, though, is that the backstage frame story comes back – it must come back. I hope I’m not giving away too much here. But if you understand the logic of a frame story, you already realize what must happen. I hoped O’Connell and Withers might have found a novel way to resolve or combine the main story and its fantasy frame, but no.

At the end of ‘The Tempest,’ Prospero can declare the actors, even we theatergoers in the seats, are all just “such stuff as dreams are made on” — and we still feel the full wonder of ‘The Tempest’ as real (as real as any theater performance, that is). That’s because the actors themselves were not part of a we’re-just-dreaming-up-a-play production. What we saw and heard them express is all we know of them as dramatic characters. They can’t suddenly pull back a curtain to reveal a second, alternative plot line to explain away everything. Or if they did, we’d feel thoroughly cheated. Google ‘Dallas,’ and Bobby, the death of.

By this point, Rostand’s ‘Cyrano’ has turned autumnal with its two, aging, always-could-have-been lovers. This is the play’s genre-bending achievement. What genre ‘Cyrano’ belongs to has been endlessly debated – rom-com? comedy-drama? chivalric romance? — precisely because Rostand pulls off this change in tone.

Time is clearly running out, Roxanne and Cyrano have begun to see that their own follies have consumed their lives, and just as the Amphibian production turns this sad corner — well, you know what happens. O’Connell and Withers immediately dissolve the sweet heartache they’ve worked two hours to achieve.

That’s always the problem, isn’t it, even with the most moving of dreams?