‘Bootycandy’ is the title of an interconnected series of bawdy comic sketches about growing up black and gay. The play is outrageous and cutting. Local All Things Considered host BJ Austin asked Art & Seek’s Jerome Weeks about Stage West presenting the show’s area premiere — which he calls an unusual move.

So Jerome, why’s that unusual?

‘Bootycandy’ at Stage West through Sept. 11th
JWIt’s a sign of change, a real risk. For 37 years, Stage West has been a very fine but solidly mainstream theater. And it’s definitely done some daring shows.

But without a doubt, ‘Bootycandy’ is the most sexually explicit one. It’s also a show that provocatively addresses the black gay experience — or at least parts of that experience, the wildly funny and even lurid parts.

JW‘Bootycandy’ is not a conventional play – it’s more like “loose-knit, selected scenes” by playwright-director Robert O’Hara. Who, by the way, will be in town next month directing the world premiere of the musical, ‘Bella‘ at the Dallas Theater Center. What we follow through these scenes is the sexual development of Sutter, a young man played by Aaron Green. We follow him from what seems to be pre-adolescence to adulthood, but along the way, we also witness, say, the preacher of Sutter’s church, denouncing some of his congregation. They’ve been whispering about his ‘unmarried’ status. As the fiery, even shall we say flaming, preacher, Djore Nance delivers a hilarious, burn-down-the-house performance. 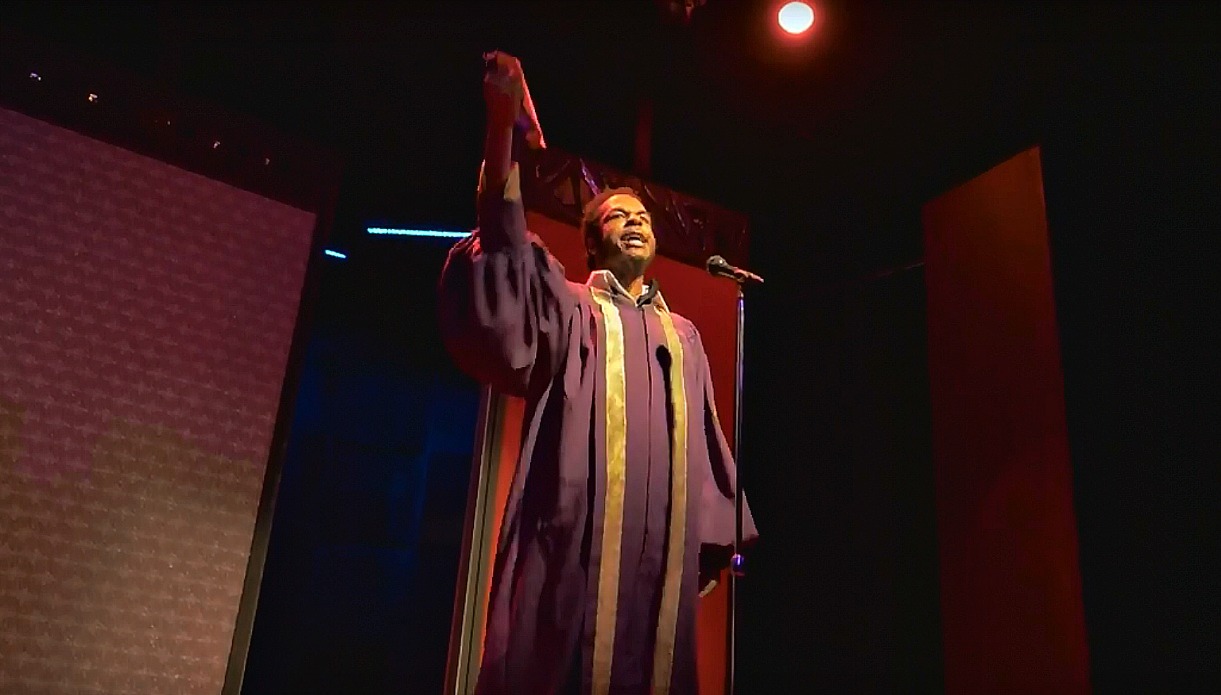 Djore Nance as the preacher in Stage West’s ‘Booty Candy.’

Meanwhile, Sutter’s parents recognize he has these questions and ‘mannerisms’ they’d really rather not talk about — they’d prefer to deny the whole situation. But when Sutter tells them a man’s been following him home from school and hugging him, his mother (Liz Mikel) and his stepfather (Djore Nance) leap into protective action.

This year, Mom declares, there’ll be NO musicals.

Mother: You’re not going to be in in no damned ‘Wiz.’

Son: I’ve already been cast as the Scarecrow.

Mother: I don’t care if you’ve been cast as the Scarecrow’s mama.

Stepfather: You need to STOP playing those Whitney Houston albums! And stop talking on the phone for three hours every night to Brandon about ‘Star Search’! And start mowing the lawn twice a week.

Mother: And wash my car.

Stepfather: And stop playing so much Uno.

Mother: And do the dishes without listening to that Culture Club!

Stepfather: And take them stickers of DeBarge, Madonna and Prince and the Jacksons off the side of your bunkbed.

That’s hysterical. It’s like something from the old TV show, ‘In Living Color.’

JWRight. Very much like ‘In Living Color,’ ‘Bootycandy’ deals in caricatures, and often caricatures in drag: the overbearing black mother, the flamboyant cross-dresser. But it does this with far more profanity than was permissible for that FOX TV comedy pathbreaker in the early ’90s. O’Hara pushes his satire of the black family and black religion into sheer outrageousness so the play’s mocking humor risks offending people, black and white, gay and straight. There’s a wild, ecstatic freedom in several scenes, where the humor just cuts loose and doesn’t seem to care who gets sliced. This only makes Aaron Green’s quiet, reluctant, almost emotionless Sutter feel like an outsider in his own family.

Yet ‘Bootycandy’ also has its extremely somber moments. As he matures, Sutter may have nothing in common with his relatives and have no rewarding connection to any institution or outside authority. But perhaps he can at least connect to a fellow gay male. Instead, he has a long and unhappy affair with a married white man, played by Justin Duncan.

Duncan: You tried once – a girl

Duncan: I want to be your friend, just friends

So all this holds together?

JWThere are weaknesses. Halfway through, we get a conference of black playwrights. It’s a satire of academia and critical theory. O’Hara gets ‘meta-theatrical’ here. One implication of the scene is that what we’ve watched so far was actually patched together by this bickering collection of different writers. That would explain the wild swings in humor and style. The conference also seems like O’Hara’s proleptic argument in defense of ‘Bootycandy.’ He’s anticipating and mocking possible objections to his play’s caustic treatment of the black family, black religion, the gay community.

This writers’ conference edges ‘Bootycandy’ away from the genre of ‘semi-autobiographical gay comedy’ into the highly self-conscious, cultural satire of George C. Wolfe’s ‘The Colored Museum.’ (Wolfe, in fact, was an early mentor of O’Hara’s.) But after O’Hara gets his quick shots in at reviewers, other black writers and clueless white academics, he immediately drops the whole effort. In the end, it’s funny, but it’s mostly a distraction.

What’s much more troublesome are the last few scenes. Sutter, previously sympathetic, becomes increasingly cold-hearted until he can simply shrug off the death of another man. O’Hara says, this is the what happens with ignorance and homophobia, the wholesale misunderstandings across race and generations and gender identity. Bravo — show us the (comic) damage, the wounds. But then the show makes a last-second pivot into exultation that seems pretty unearned. Director Akin Babatunde has done a terrific job keeping ‘Bootycandy’ on the rails, moving fast and funny. And he’s got a crackerjack cast, not just Nance — the play is a showcase for his over-the-top talents — but also Green, Duncan, Mikel and Natalie Wilson King (both of whom are featured in a riotous reversal of a lesbian wedding ceremony).

But not even they can make emotional sense of the ending.

There’s one welcome scene toward the end, though. That’s when Sutter visits his grandmother (Djore Nance) in her retirement home. It’s welcome because — even in drag, even with granny being an outright hustler after money and short ribs for lunch — it’s the closest thing we ever see to quiet, conventional family life. It’s not a tragic hook-up or a comic howlfest, which have been the only two modes black gay life seems to operate on throughout most of ‘Bootycandy.’ (O’Hara has credited his grandmother with helping raise him.) Thanks to Nance, it’s still wickedly funny, but his granny is also real, and the scene is about the only time Aaron Green gets to be calm and kind as Sutter.

At heart, O’Hara is a satirist, so yes, his responsibility is to the knife, not the bandage. But the format of ‘Bootycandy’ is essentially biographical — we get a young black gay man’s life. And to be credible, that life can’t be all pathology and penis jokes.

At the start, you called this a risk for Stage West? Why?

JWIt’s not just ‘Bootycandy.’ The next season that Stage West just announced has a slew of new plays by young writers. There’s not a familiar old favorite in the bunch. Three years after the death of Stage West’s founder Jerry Russell, executive producer Dana Schultes and artistic director Jim Covault are clearly steering the company in a new direction. In Dallas terms, it’s as if Theatre Three, with its balanced mix of new plays, musicals and classics, suddenly started acting like a younger, more venturesome company like Kitchen Dog.

The risk in all this, of course, lies in alienating Stage West’s older subscribers. Obviously, the long-term results won’t be in until next season. One play rarely makes or breaks a long-established theater company. But Saturday’s opening night audience for ‘Bootycandy’ was one of the most enthusiastic I’ve seen at Stage West and at Sunday’s matinee, the theater started its new project of holding post-show discussions. A surprising number of grey-hairs stayed. They didn’t just not walk out at intermission, they stuck around. They wanted to talk about this wild new play.