The Dallas Theater Center recently presented Shakespeare’s ‘The Tempest’ but a ‘Tempest’ like no other North Texas has seen. A handful of professional actors played the lead roles, but they were joined onstage by one hundred regular citizens, plus local marching bands, dancers and choirs. This kind of ‘community interactive’ show will now be an annual project at the theater called Public Works Dallas. Art & Seek’s Hady Mawajdeh and Jerome Weeks saw ‘The Tempest’ – and they talked about the production for this week’s State of the Arts.

Jerome, I confess I’d never seen ‘The Tempest’ – that is, live, onstage – before. But even to me, the Theater Center’s production seemed pretty unusual for Shakespeare. I mean, Dallas Mayor Mike Rawlings performing a wedding onstage? And big musical numbers with drumlines and dancers and huge crowds? What did all this do to Shakespeare’s play?

JWIt made it less a stage play and more a celebration, a civic pageant. Or think of it as ‘real community theater.’ Public Works Dallas aims to include, as much as possible, the entire community of Dallas onstage. We saw the Anita Martinez Ballet Folklorico and the Inner City All-Stars Brass Band, who I really enjoyed. We saw elementary schoolkids and elderly folks brought in from community centers.

But Public Works Dallas also aims to get the Dallas community in the theater seats. In effect, Dallas would see itself onstage, see all these aspects of the city many of us have never known were here.

It’s an admirable goal. Artistic director Kevin Moriarty drew in people with this ‘Tempest’ who normally don’t feel at home in the Arts District. As Moriarty said – in a stirring opening-night speech – in this democracy, the arts are every person’s birthright. I mean, our tax money helped pay for the district. It’s ours. It shouldn’t be a vacant cluster of culture castles.

So basically, what Public Works Dallas does is try to replace what many schools used to do — acclimate people to the arts, to theaters, theatergoing, the art of drama itself. In that way, it expands and integrates the award-winning, audience-building efforts of former artistic director Adrian Hall’s Project Discovery program, which is still fighting the good fight and busing school kids to regular theater shows. But Public Works Dallas  expands and integrates that effort directly into the DTC’s season.

Now, you saw some of what that effort entails because you reported on how Public Works Dallas made all this work. 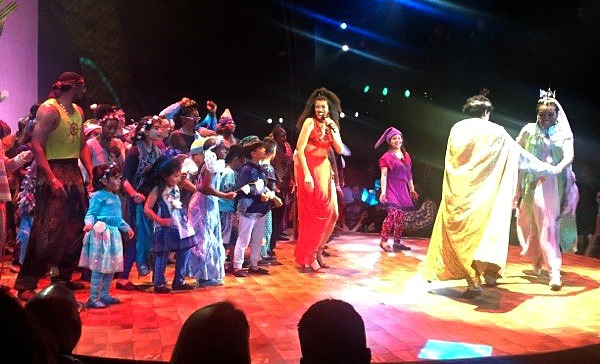 That’s right. This ‘Tempest’ cost $600,000, which is a lot. But much of that money went to months and months of training before anything or anyone went up onstage. The DTC and SMU teamed up with five community centers around Dallas to bring in ordinary folk who’d indicated they wanted more culture in their lives. So professional actors helped prepare them to perform. And of course, the DTC also teamed up with area artists like Dark Circles Contemporary Dance and hip-hop singer — and Artist Spotlight profile — Sam Lao.

JWSo that was the big spectacle, the special effect this ‘Tempest’ offered, a huge, colorful crowd of Dallasites having fun onstage. And the extent of community involvement all this requires is new and welcome. This was inclusive art that aimed to be of the people and for the people.

But the show itself — the dramatic production — was really just the logical extension of what Moriarty has previously done. Since he first directed Shakespeare here in 2009 — a dance-party ‘Midsummer Night’s Dream’ that opened the Wyly Theatre — he’s always simplified Shakespeare, he’s always tried to make the plays accessible even to high school students. So believe me, Moriarty has used pop songs and squirt guns and confetti before. 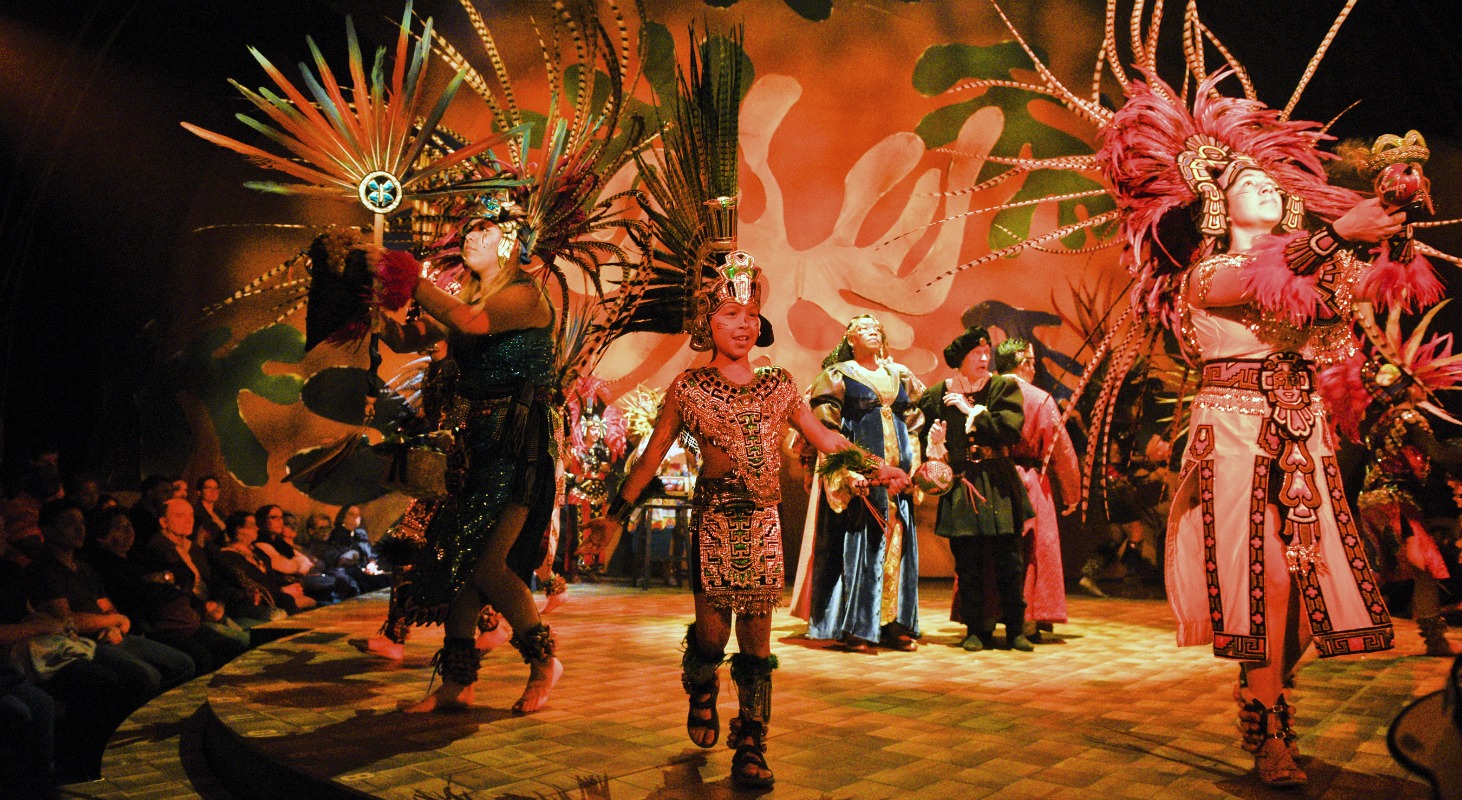 The Aztec Dancers own that stage. Photo: Karen Almond

You make all that sound like a drawback. I mean, I had performers run past me and squirt me with water. That was fun! So was seeing some of the people that I knew onstage.

JWYes, but it is a limited approach to Shakespeare. What you and I are saying here feels a little like the famous exchange near the end of ‘The Tempest’ when Miranda, Prospero’s young daughter, sees all these other humans she’s never seen before and exclaims, ‘Oh brave new world that has such creatures in it!’ Everyone loves that sweet line; they forget Prospero’s typical bit of buzkill parental wisdom that follows: “Tis new to thee.”

I’m not a purist; I don’t believe you mustn’t change a single comma or stage direction. I’ve been thrilled by radical re-imaginings of his works. And I certainly see the value in doing something like this once a year. But remember, when it comes to accessibility, Shakespeare Dallas already turns the Bard into both low-cost summertime picnics and low-cast staged readings at Hamon Hall. And Shakespeare in a Bar even serves him up with beer and improv comedy.

So I have to ask, is this kind of ‘Colorful, Interactive Shakespeare for Newbies’ all we can hope for from our greatest playwright and our biggest theater company? What about Shakespeare productions that rend the soul? That challenge our life choices? That make us think, ‘Oh brave new stage that can hold such wonders?’

This particular version was originally created by Lear deBessonet in New York for the Public Theatre, and it strips out a lot. That’s not a cardinal sin — you have to strip out some backstory and speeches if you’re going to put in musical numbers and dance sequences. Shakespeare’s story has the wizard Prospero banished to an island by his evil brother. And Prospero, with the magical help of his servant genie Ariel, seeks revenge by having his brother shipwreck on the island. Plus, there are all the sub-plots of Prospero’s daughter Miranda falling in love with one of the other storm-tossed visitors, Ferdinand, and Caliban, another island beasty but a more unpleasant one, planning a murderous rebellion against Prospero.

Most of these relationships didn’t really exist here at all — except for Tony Award-winner André De Shields as Prospero and Liz Mikel as Ariel. Ariel is pretty much the play’s narrator here — her reminders to the audience that she and the other spirits can’t be seen by the human characters (“We are invisible!”) is a delightful (and yes, functional) comic throwaway. A sign, though, of the uninspired thinking that prevailed through some of this show’s basic concepts: I’ve seen Ariel played as a David Bowie-ish space alien, as a gymnastic, androgynous creature with blue skin like some minor X-Men character, even as a briefcase-carrying personal assistant. Here, Liz Mikel was an old-school winged fairy straight out of a children’s book, equipped with wobbly golden wings. And Prospero’s magic staff was a low-budget, Toys ‘R’ Us light saber. On their own, the Mitotiliztli Yaoyollohtli Aztec Dancers brought more otherwordly splendor to the stage with their feathered crowns. (To give costumer Jennifer Ables her due: Giving De Shields’ Prospero a mantle of dreadlock-looking hair that matched De Shields’ own made him look even more like a lion in winter.)

But it’s the tenderness and loyalty Mikel and De Shields brought to their pairing that made them feel real, the only real characters onstage. Now, I know the possible objection to what I’ve just said: It’s easy to praise the pros and belittle the amateurs. So I should point out that Alex Organ is one of our boldest, smartest actors but his Caliban was mostly just a shouting grievance, while the two clowns — Ace Anderson as Trinculo and Rodney Garza as Stephano — did by-the-numbers drunk acts. The only true comic novelty came when Trinculo grumped off into the seats at one point, sat on a surprised theatergoer and sulked.

De Shields himself started with a great, vengeful majesty, but it seemed like it’d be a one-note performance at times. Let’s face it: De Shields can do weathered grandeur while taking an afternoon nap. So his finest moment came when Prospero decides to drop his wounded vanity and seek reconciliation with his hated brother. Composer-lyricist Todd Almond happened to uncork his most soaring musical number for this scene and de Shields sang the hell out of it.

Although Hady, even you have to admit, “somewhere at an angry in-between” is a truly clunky lyric. 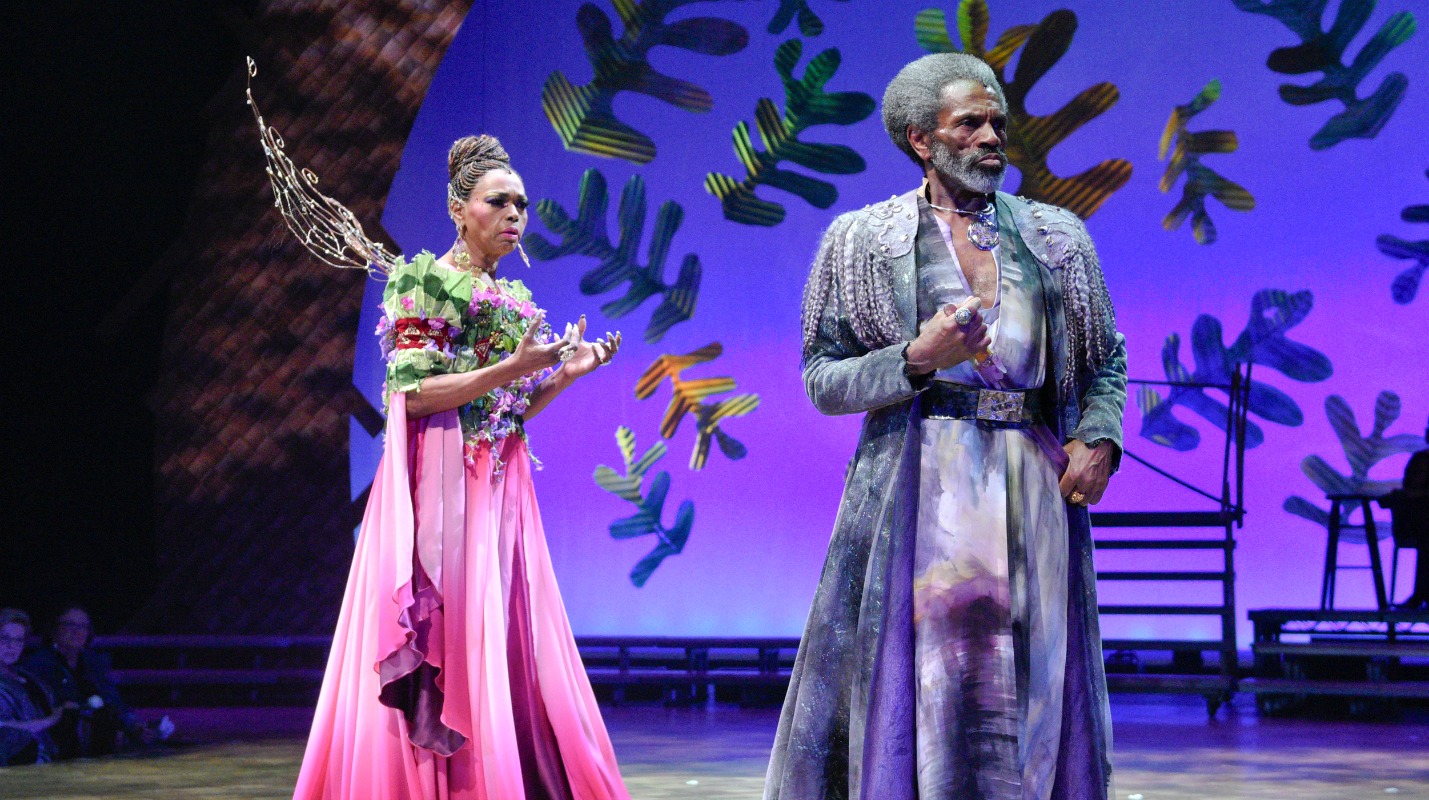 That may be, but this isn’t so much about perfect lyrics or depth of acting. I wasn’t wild about everything in the show, either, but this is about finding and engaging new audiences — making more people feel connected to the theater because maybe they come to see their sister onstage but find something more in the experience, something to come back for. Maybe sacrificing a little artistry and going for the obvious fun onstage is worth that. Public Works Dallas is supposed to follow up with the performers and audience members to see if that’s happening, that new connection. Why? Because most of the big arts groups in Dallas draw from the same, tiny pool of neighborhoods, and they know it. And you just know those neighborhoods all exist north of the Trinity River and south of LBJ. That’s it, and that’s the way it’s been for years. To survive, to expand, to fulfill their promise, our arts groups have to break out of that. And this is a big, targeted investment in doing just that.

JW I agree completely. The young woman sitting next to me had come from Kansas City to see her cousin. She’d never been to the Wyly before and had never seen Shakespeare before. It’s just I think depth of acting — and vivid, insightful direction to make a play truly speak — those should be part of any plan to engage audiences.

So we’ll agree to disagree. Thanks so much, Jerome.