Good news. It looks like Theatre Three is playing in a new sandbox.

Over the last three years in North Texas, theater leadership has experienced an extreme makeover. Five, long-time stage companies have undergone significant, sometimes tragic changes in artistic directors: Stage West (from the late founder Jerry Russell over to Dana Schultes), WaterTower Theatre (Terry Martin to Joanie Schultz), Jubilee Theatre (what remained of the late Rudy Eastman’s board and company to Bill Ray), Circle Theatre (from the late co-founder Rose Pearson to her husband and co-founder, Bill Newberry) and, of course, Theatre Three (the late co-founder Jac Alder to Jeffrey Schmidt).

‘The Minotaur’ at Theatre Three through Aug. 27th.

Of the four, Circle Theatre seems to be staying the course in its new season with its selection of light, contemporary comedies. Only Jubilee could be said to be steering a more conventional path (with shows such as the current ‘Beehive’).

The other companies have gone off-roading, aiming for somewhat different GPS coordinates – with new plays, new playwrights, darker, more daring material (Stage West’s ‘The Nether’ and ‘Mr. Burns’) and plays that are more politically and sexually outspoken (‘Bootycandy’ at Stage West and ‘Hit the Wall’ at WaterTower, along with the upcoming ‘Hand to God’ and Quiara Alegria Hudes’ ‘Eliot, a Soldier’s Fugue’).

Schmidt’s debut season at Theatre Three, announced in March, is ambitious, expansive and intriguing. It includes collaborations with smaller, adventuresome companies (a five-actor ‘King Lear’ from PrismCo, a new musical by Our Endeavors Collective), plus a world premiere of a comedy by former Dallas playwright Matt Lyle.

And four productions directed by Schmidt himself (who, like Alder, often designs his shows).

It tells you how unusual the choice of scripts is that, by far, the oldest, most familiar play is ‘Les Liaisons Dangereuses.’ No classic musical, no Moliere or Shaw comedy or other Theatre Three mainstay. It’s true the company started more than 50 years ago as Dallas’ ‘off-Broadway’ house, presenting Edward Albee and ‘Jacques Brel is Alive and Well and Living in Paris.’ And in recent seasons, executive producer Jac Alder had sporadically refreshed the offerings – with area premieres of daring shows like ‘Bloody, Bloody Andrew Jackson’ and developing the popular musical ‘On the Eve’ (designed and directed by Schmidt). 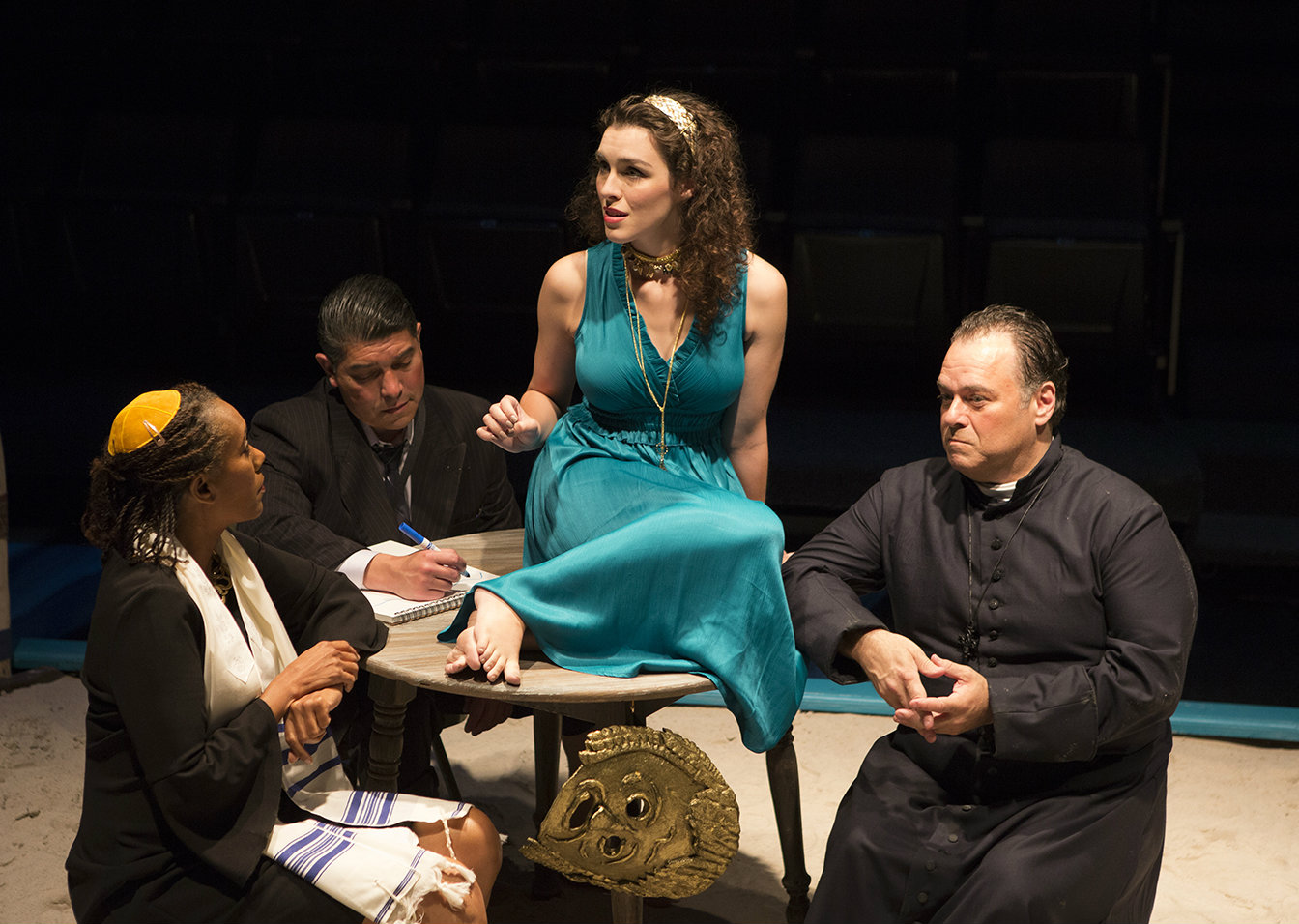 How do we get off this island? In the center is Cora Grace Winstead as Ariadne, around her are chorus members Renee Jones, David Lugo and Randy Pearlman. All photos: Jeffrey Schmidt

Still, if ever an aging company needed a re-boot, it was Theatre Three. Its shows could settle for easy camp and medium-warm ambition or execution – in short, theatrical comfort food. It lived up (or down) to its standing as the city’s “second theater” after the Dallas Theater Center.

But that position is important – as was Alder’s efforts as a de facto arts leader. In Fort Worth, Stage West’s success is pivotal for the future of that arts community – particularly with Schultes’ plans to create an expanded lobby-cafe and a second stage (available for use by other companies). The same goes for Theatre Three’s future as the only Equity company, other than the Theater Center, with a home in downtown Dallas.

Alder succeeded for so long because he ably wended his way between DTC on the one side (with its national ambitions, its city-supported facility, its wealthy patrons, its desire for Civic Significance) and on the other, let’s call them the Wild Bunch: the alternative theaters, the no-longer-so-young disrupters like Kitchen Dog, Undermain, Ochre House, the Uptown Players. Alder’s theater had a significantly older audience and a decidedly middle-class-not-high-society board. But the company succeeded in buying its own space (unlike the smaller theaters), and Alder had become expert at multi-tasking, working his way through all the local layers of political support, finagling grants, remodeling and upgrading his theater.

And just surviving. For more than 50 years.

All of which leads us to Schmidt’s sandbox, which is center stage in his playful area premiere of Anna Ziegler’s ‘The Minotaur.’ It’s not a bad place to begin: an updated, whimsical version of a classic Greek legend about a labyrinth.

Schmidt’s set is ingenious and metaphoric: The ‘labyrinth’ in this case is made of shadowy rows of hanging sheets in one corner (looking like sails or backyard laundry), with a sizable sandbox in the middle, trapping the characters, surrounding them with small streams of water. The whole isolated little island is like a beach volleyball version of ‘No Exit.’

Obviously, the design was partly inspired by the isle of Crete, ruled by King Minos and Queen Passiphae, the original location of the mythic labyrinth. But it was also inspired by the ‘gamesmanship in Ziegler’s clever comedy: The Minotaur (son of Passiphae) and Ariadne (daughter of Minos) pass the time playing Connect 4 while being kibbitzed by a Greek chorus made of – wait for it – a priest, a rabbi and a lawyer. 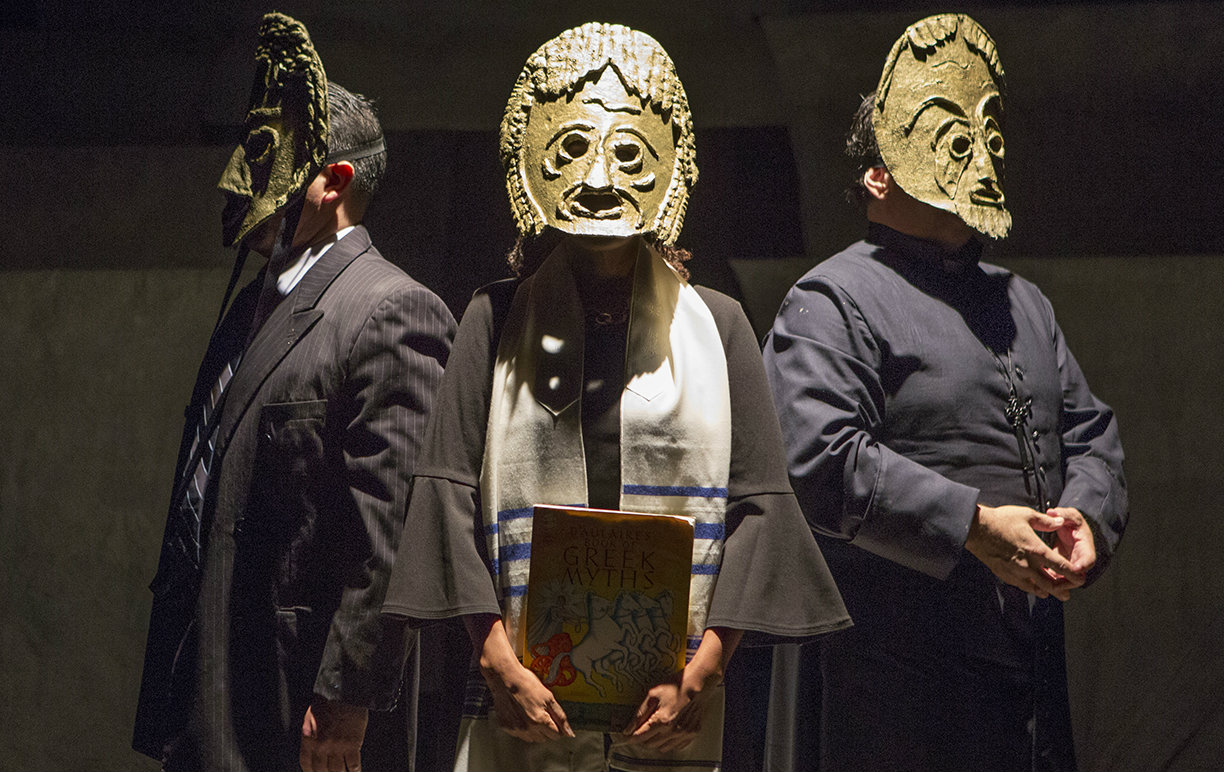 A lawyer, a rabbi and a priest walk into a labyrinth: David Lugo, Renee Jones and Randy Pearlman as the chorus in ‘The Minotaur.’

Got all that? No matter. Here are the two important things to know: One, Ziegler can write. Updating a classic text by trapping comic, contemporary characters inside the confines of the story is at least as old as Tom Stoppard’s ‘Rosencrantz and Guildenstern Are Dead’ (1966). As Stoppard’s title indicates, ‘Rosencrantz’ has a bleak view of the possibilities for real change, for human growth – no matter how smart or self-aware the characters may be.

Ziegler has a slyer, more ambivalent take on fate. After all, the original Greek legend she’s working with has Theseus killing the Minotaur and freeing his victims. It’s a classic myth of heroic success, complete with the traditional trial the hero undergoes, infiltrating the villain’s lair and resurfacing to claim the girl (and win Athens). But what Ziegler has pounced on is the often overlooked oddity that the Minotaur (Darren McElroy) and Ariadne (Cora Grace Winstead) – essentially, this story’s villain and female prize – are half-siblings. They’re the center of this story as much as any hero-coming-to-the-rescue. The two sit around with their game board, grumbling like resentful teens. They complain about the roles they must play (the chorus keeps reminding them how their story has always been told). And Ariadne sends girl-crush emails to Theseus, hoping he will come and save her from this sad little half-life.

Before anyone can sing ‘Teenage Wasteland,’ Theseus (Kyle Igneczi) finally arrives. He’s the one person who eagerly grasps his conventional role (a hero just keeps moving forward) because he doesn’t seem to have a truly introspective cell in his heroic body. Until, that is, he faces Ariadne’s emotional needs (they confuse him) and the fact he’s destined to kill her half-brother – but can do it only with her crucial help (which confuses him even more).

Two years ago, Ziegler had a year most playwrights dream of:  She had four different plays opening across the country and a fifth opening in London with Nicole Kidman. Yet here she is, finally making her North Texas debut with ‘The Minotaur.’ More, please. It’s true ‘The Minotaur’ is an earlier effort, and it shows. The writing gets unfocused near the end of the 90-minute, intermissionless comedy; just who wants what or gets what is unclear. But we sense this primarily because the play has been so nimble and nuanced until then. 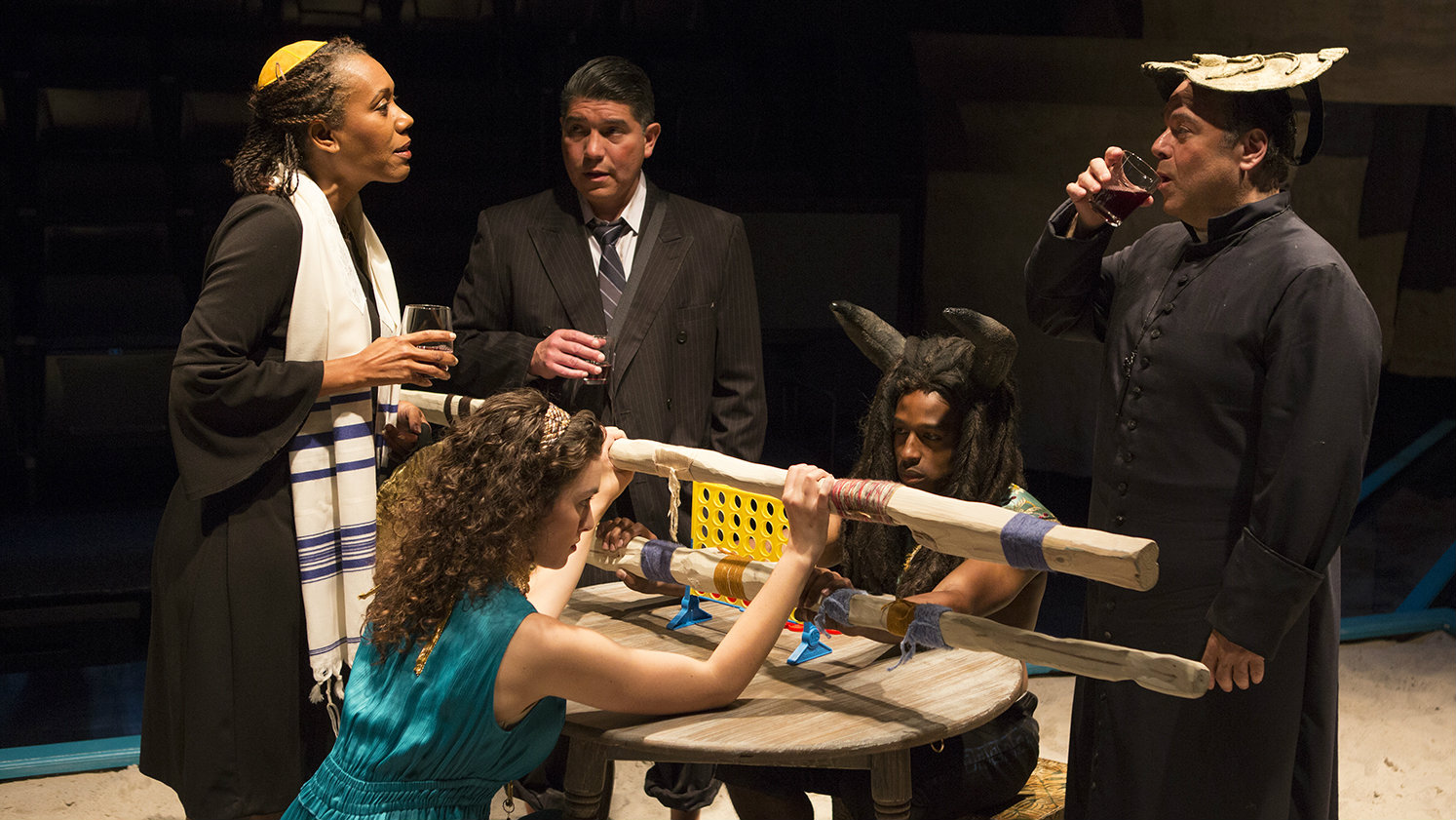 Have a drink and try to connect the dots in all this: Renee Jones, Cora Grace Winstead, David Lugo, Darren McElroy and Randy Pearlman.

References to items like an iPod full of a girl’s favorite songs are going to date the script, but it may well remain fresh and clever, given the kind of cast and direction Schmidt has brought to it. Which is the second important thing to know.

Schmidt’s production designs have tended toward the conceptual with realistic flourishes – like his brilliant re-imagining of ‘The Farnsworth Invention’ as a giant, test-pattern TV studio. Or his making all of ‘Hands on a Hard Body’ take place in front of a rundown Nissan dealership. Oddly enough, the weakest aspect of the ‘Minotaur’ production is a case of a concept-too-far. Schmidt acknowledges Crete’s current immigrant crisis by stringing some barbed wire around one stage entrance. It’s unnecessary, a distraction. It’s not connected to anything the play is really about. Not a single character wonders if he or she will be accepted as a native and allowed to stay. Or if there’s a quota on newcomers. The Minotaur, who never uses the barbed-wire entrance, only wonders if he’ll be allowed to live.

Still, the important point is that Schimdt’s directing isn’t conceptual. No highly stylized acting choices. He lets a good cast have at a good script.

As Ariadne, Cora Grace Winstead is a real find: fresh-faced, young and with a quicksilver intelligence. Her Ariadne is cagey enough to fear the pitfalls around her. Kyle Igneczi is close to playing Theseus the way Patrick Warburton used to play the title character in the old TV series, ‘The Tick’ – as a hero who’s dimly aware that old-school heroism may be a joke, a formula, but still, you know, he’s a hero. Gotta count for something. I have ambitions. That monster’s gonna die and I’m gonna go on and save Athens – if I can just ignore all this distracting static, like the needy Ariadne or the Gloomy Guses of the chorus.

Darren McElroy brings his strong air of melancholy to the Minotaur, which perfectly suits Ziegler’s efforts at humanizing the monster. With every line, McElroy’s Minotaur conveys a tragic sensibility, the knowledge there’s surely no way this story comes out happy for him. Hey, his mother mated with a bull out of an insane passion. That doesn’t exactly portend some normal, um, personal growth and self-actualization. And the entire Chorus – from conception to cast – is a low-key, deadpan delight. David Lugo, Renee Jones and Randy Pearlman take turns delivering their put-down observations, their reminders of the uncomfortable backstory here. They’re a collective reality principle.

To sum up: The reality here is that Schmidt chose to start his tenure at Theatre Three with a small, quick-footed and new(ish) comedy that plays to his strengths: not hard-edged dramatic realism but a theatricality that’s wry and inventive (not surprisingly, all four shows he’s scheduled to direct are comedies). Non-traditional casting is also no big deal for him.

With this show and this season, Schmidt’s ambitions may not be grand or deep – so far – but they are smart and confident. His entire approach says, ‘I got this. I grew up here as a theater artist.

We can build something fresh on this island Jac built.’