Like many North Texans, freelance arts writer Olin Chism heads to Santa Fe in August to beat the heat – and take in opera.  This year, he found some little-seen works, and a star-turn by Dallas Opera’s music director.

SANTA FE — This time there are no world premieres (that will come in 2017), but the Santa Fe Opera’s summer festival includes enough rarities to satisfy jaded opera fans.

The only ultra-familiar work on the company’s repertory list for 2016 is Mozart’s Don Giovanni. Gounod’s Romeo and Juliet is not obscure, but is not as popular as it once was. That leaves Puccini’s The Girl of the Golden West, Samuel Barber’s Vanessa and Richard Strauss’ Capriccio as operas that many would know only by reputation.

This has been a good year for the company. Casts have been strong, as have performances by the chorus and orchestra; stage direction has made sense, for the most part; and set designs are always interesting even if occasionally puzzling.

The only character that seemed somewhat weak, though not disastrously so, was Edgaras Montvidas’ Don Ottavio. But Don Ottavio is always in danger of seeming a bit of a wimp, even if he has some great music to sing. 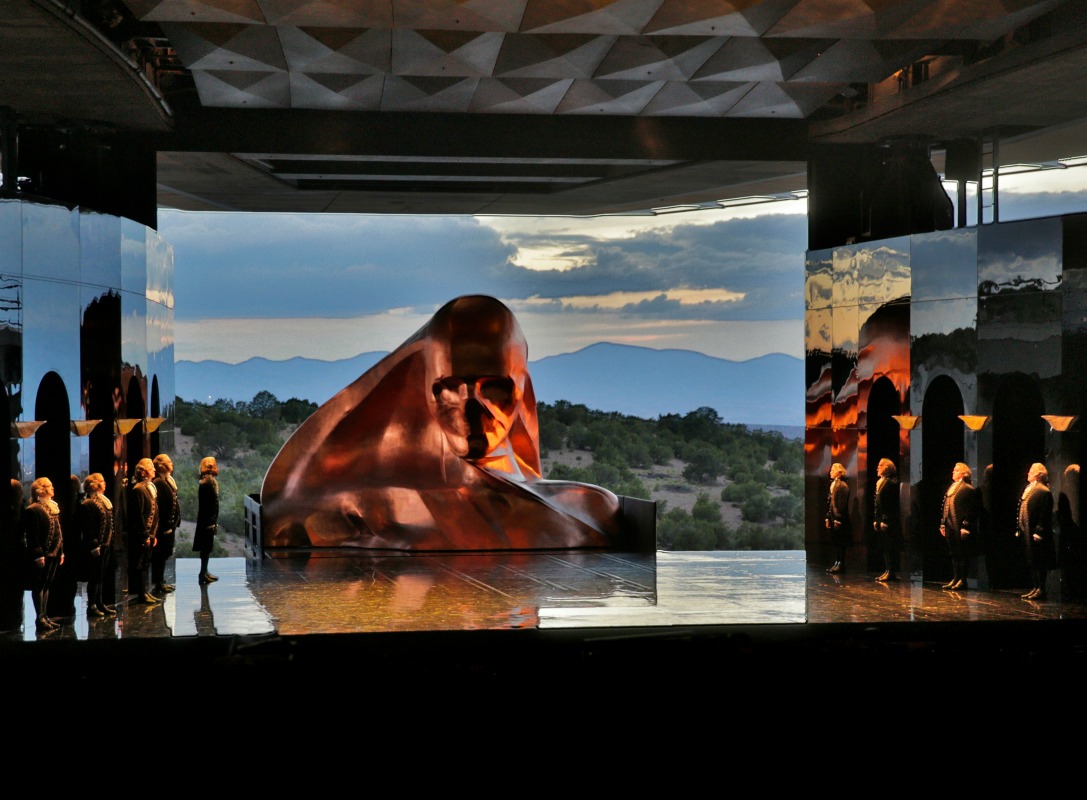 Ensemble in ‘Don Giovanni’ with the Jemez Mountains in the background. All photos: Ken Howard

As often in Santa Fe, Nature is a distinctly possible participant in productions in the semi-open-air theater. There was a spectacular instance of this in the final measures of Don Giovanni. As the Commendatore was grabbing the don’s hand to drag him off to Hell, there was a loud peal of thunder. The audience laughed and applauded.

Nature plays a role in the beginning of this production, as well. The audience’s first visual impression is a particularly appealing scenic view of the distant Jemez Mountains, almost inevitably lit with flashes of lightning. Costumed and bewigged attendants stand onstage with their backs to the audience, silently watching Nature’s display through the open rear of the stage.

Soon the attendants retreat and an ominous creature of many changing shapes rises at the rear of the stage. Shifting projections give the impression that the creature is constantly in flux. Not every aspect is unpleasant, but many are.

This monster is a dominant scenic element in the production. According to director Ron Daniels the figure represents “Thanatos, Death” — Don Giovanni’s ultimate fate, of course. The monster never directly participates in the show (the cast ignores it), but it certainly holds the audience’s attention.

The Girl of the Golden West (or La Fanciulla del West if you insist on the Italian title) is an interesting entry in Santa Fe’s rep list. Puccini and his librettists, Guelfo Civinini and Carlo Zangarini, aimed for authenticity — there are grizzled miners, a saloon, Indians, a gold rush in mid-19th century California. 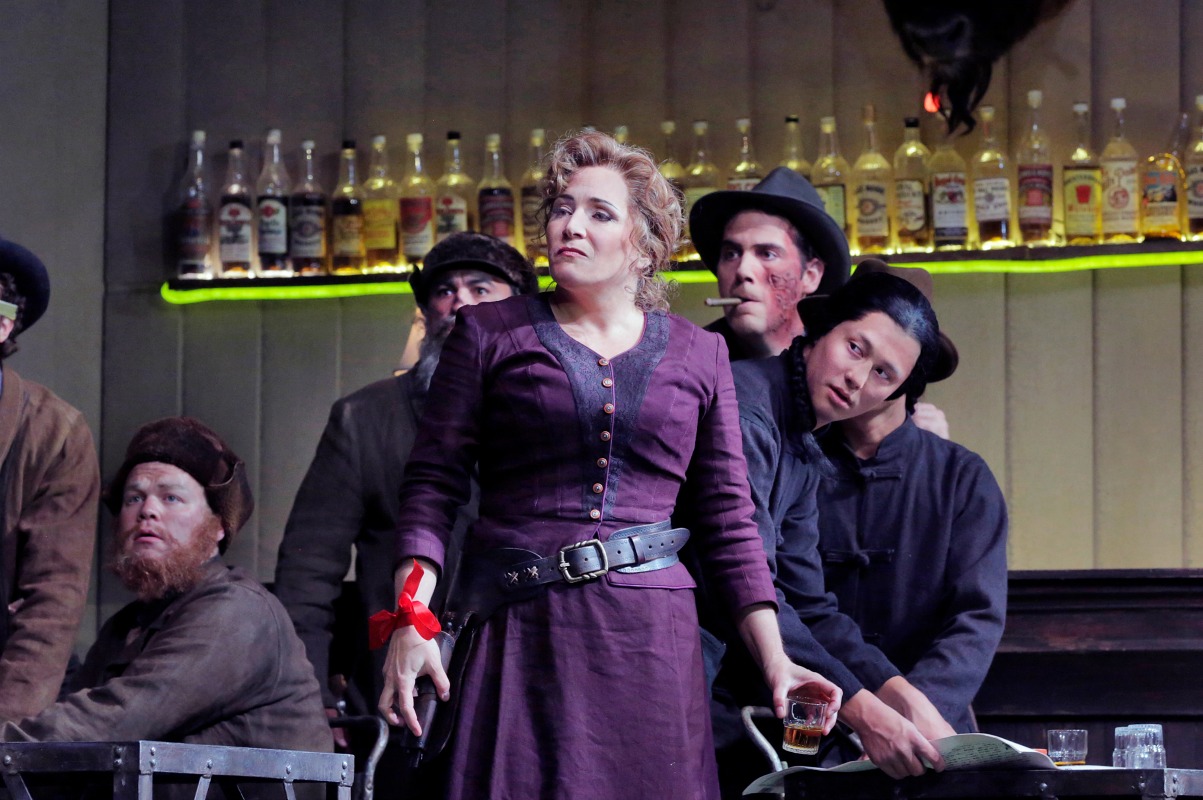 Patricia Racette in ‘The Girl of the Golden West.’

These bits of frontier Americana invite a campy treatment in American directors’ hands, but Puccini took the work seriously (he once claimed it was his favorite of his operas) and Santa Fe’s director, Richard Jones, treats it with respect. It even becomes a little sentimental at times.

But even in a respectful treatment, Civinini and Zangarini produce a few unintended laughs or at least smiles with their work. For instance, they appear to be aiming for a little linguistic color by tossing in occasional English words and phrases in their Italian text. Santa Fe’s cast cooperates by pronouncing the English as an Italian immigrant might. My favorite was “hip hip hooray,” which came out “heep heep hooray.”

The stars of the show, heard on Aug. 2, were soprano Patricia Racette, a fabulous actress and singer who made Minnie both a strong and sympathetic figure, and conductor Emmanuel Villaume, the music director of the Dallas Opera, who led a strong performance that made a good case for the opera as a work to love as well as respect.

Romeo and Juliet, heard on Aug. 4, was distinguished by the dramatic and vocal artistry of Stephen Costello and Ailyn Pérez, with powerful support by a large cast. The work of Raymond Aceto as Friar Lawrence especially comes to mind.

The one bizarre element is the setting of the opera in a mausoleum (designed by Ashley Martin-Davis). A few shiftings of items suggest other locales, but basically it is mausoleum all the way, even in a ballroom scene. Of course, this is no worse than all the tinkering with Shakespeare that Gounod and his librettists indulged in, to the irritation if not fury of Bardophiles. 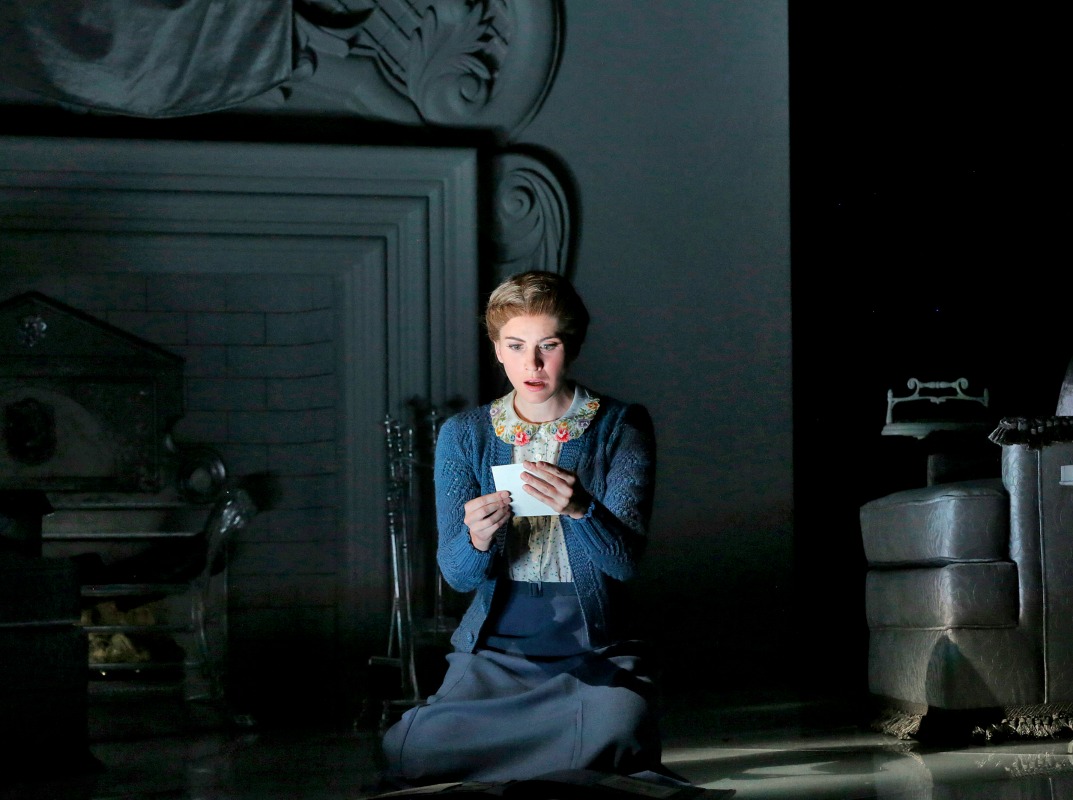 Virginia Verrez as Erika in ‘Vanessa.’

Vanessa (Aug. 3) and Capriccio (Aug. 5) are two lesser-known works by great composers that have at least moderate appeal if you’ll give them a listen.

Vanessa is a kind of spooky tale of a woman, Vanessa, who has spent many years in seclusion, hoping for the return of an old lover. Instead, the lover’s son shows up, reveals that his father has died, and makes a play for Vanessa’s faithful niece. But Vanessa develops a hankering for the son, and marries him. The niece herself then goes into seclusion, waiting for I’m-not-sure-what.

Capriccio is Strauss’ last opera, completed when he was 77. (He lived to be 85.) Santa Fe’s performance, conducted by Leo Hussain, with a fine group of singer-actors, was convincing proof that the composer had not lost his creative gift. In addition to his vocal writing, Strauss produced two substantial instrumental episodes in Capriccio, one a string sextet, the other an orchestral intermezzo, that are eminently listenable.

Capriccio is basically an argument about which is more important in a work of musical art, the words or the music. The aesthetic argument becomes practical when a rich widow has to choose as a husband one of two men, a poet or a composer.

It’s a very “talky” work finely brought off by Amanda Majeski (the widow), Ben Bliss (the composer), Joshua Hopkins (the poet), David Govertsen (a theater director), Susan Graham (an actress) and Craig Verm (a count), among others.

Santa Fe’s festival runs through Aug. 27, with each of the summer’s five operas receiving several performances.

The company has announced its 2017 repertory. Undoubtedly much attention will be focused on the world premiere of Mason Bates’ and Mark Campbell’s The (R)evolution of Steve Jobs. Also scheduled are Donizetti’s Lucia di Lammermoor, Rimsky-Korsakov’s The Golden Cockerel, Handel’s Alcina and Johann Strauss Jr.’s Die Fledermaus.