Skip Navigation
Home > ArtandSeek.net > So … What Has Happened With The Dixie Chicks The Past Decade?

The Dixie Chicks are playing a sold-out concert tonight in Dallas where they got their start.  It’s their first headlining tour in ten years. Their career derailed in 2003 after lead singer Natalie Maines criticized George Bush and the invasion of Iraq during a London concert. A defiant, nude cover on ‘Entertainment Weekly’ added fuel to the uproar. New York music journalist Alan Light has been the only reporter to interview the Chicks this tour. KERA’s Jerome Weeks talked with Light about the band’s path back to the spotlight.

Just a quick recap. In 2006, because of audience backlash, the Dixie Chicks seriously scaled back a national tour and haven’t put out a new album since ‘Taking the Long Way.’ Flash forward 10 years, the group reunites for a 53-city tour that has sold out places like Gexa Pavillion – in the home of President Bush. So – what changed?

ALWell, certainly, Natalie Maines’ comment happened in the pre-social media universe. You know, it’s almost surreal that a comment on stage could have those kinds of repercussions for a band. You read more hostile things on an hourly basis from almost everybody now and to no particular effect. It was a different time and place.

Have the politics of the country music audience changed?

ALWell, certainly so. I mean, I think that everybody will decide for themselves where they stand. But history has gone a long way toward vindicating criticism of the Iraq War from all sides. Right now, we have the Republican candidate for President saying it was a point of pride that he opposed the Iraq War, so it’s so hard to believe that a statement like that would have torpedoed their career in the way that it did. But this was not that far off of September 11th, and again, it was before social media really allowed for controversial voices, angry voices, opinionated voices to dominate the conversation so much.

ALI think that the Dixie Chicks have changed only insofar as they don’t care much, don’t pay much attention to contemporary country music. You know, they’re doing the things that they’re interested in. They wanted to go out and play and they’re doing that. It’s almost an experiment to see who’s still interested in them. They say that there aren’t plans right now to write new songs or make new music. This was the next step to just go back out and play together and see what that felt like. 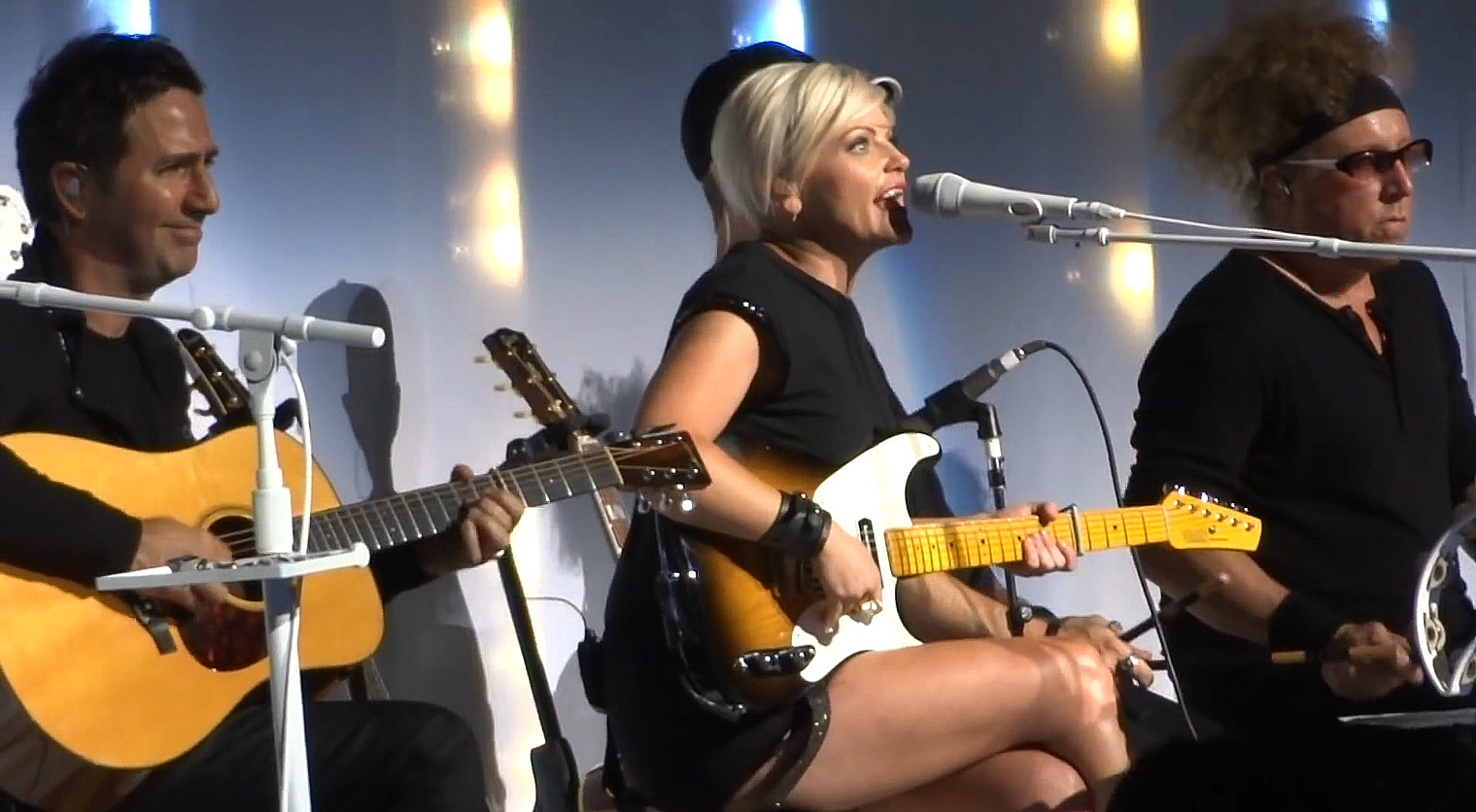 Dixie Chicks singer and guitarist Natalie Maines with members of their backup band.

ALFirst of all, until there’s new music, they don’t need any radio. They’re just out there on their name, their history and their legacy. And even the last record that they made, the ‘Taking the Long Way’ album was very much more in a pop vein, and they made the decision at that point that if country radio was going to turn on them then they’d just go someplace else.  And of course that record ended up winning album of the year at the Grammys, but there’s a roundtable in Billboard magazine this week or last week with a bunch of the young female country stars, and they still talk about the Dixie Chick effect and do you feel like you’re able to speak your mind, do you feel like it’s gonna have negative implications for your career? And so that really hasn’t completely gone away.