If you take the train into Dallas, the first thing you see as you step out of Union Station is Ferris Plaza, with its old oak trees and sparkling fountain. If you walk a little further into the plaza and look for a place to sit down, you’ll find “Ignite Ferris Plaza,” a bench shaped almost like a snake, decorated with mosaics, designed and built by students at Skyline High School. 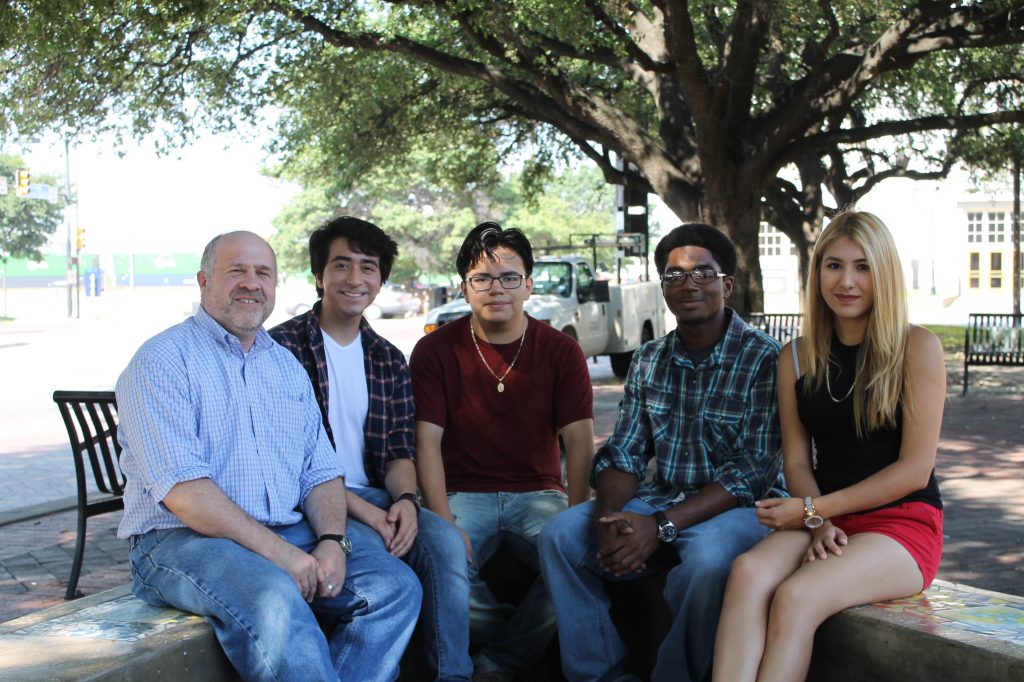 Shielded from the sun by a row of trees and shaped to allow for conversation, the bench is a perfect spot for a break. The inset mosaics, also created by the students, represent various constellations and the four seasons, from the warm blue of summer rain to the cool white and purple of winter. In the centerpiece, a circular seat is decorated with a mosaic map of downtown Dallas, with a bright green circle, the map’s “You Are Here” signpost. The Trinity River, a deep blue line running across the mosaic, was a major source of inspiration for the project: the shape of the benches even mimics the curves of a river.

Miguel Martinez, a 2015 alum of Skyline who spent his senior year working on the bench, says that being able to sit on the bench he built has changed his perspective on art and what he can accomplish.

“Seeing something like this come together,” he says, “makes you want to go for it and achieve the same goal in your own life, and work with others, and just make something beautiful.” 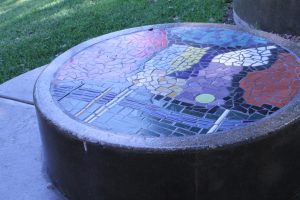 The plaza was built in 1925 as part of the Kessler Plan, George Kessler’s managed growth plan for Dallas in the first half of the 20th century. Today, when most people arrive to Dallas via car or plane instead of the train, the plaza no longer serves as the city’s gateway. Still, with its location across from the Dallas Morning News building and not far from the Omni Hotel, the park sees its share of traffic from both locals and guests.

Janeil Engelstad, founder of Dallas-based arts organization Make Art with Purpose (MAP), says that Downtown Dallas Inc. approached her about ways to activate underused parks in the area. She was already working with students in the Skyline High School Architecture Cluster, on a bilingual Mobi app guide to the Dallas Museum of Art, in fall 2014. So she approached teacher Peter Goldstein about creating an installation for a public park, and the juniors and seniors in the cluster took over from there. For the next two years, they spent class time, free periods and even weekends working on the project. They researched Ferris Plaza’s history, studied its current use and came up with a design — then, with the help of Skyline’s building trades cluster and a couple of building firms, they built a bench. The class of 2015 graduated before they could see the bench finished, but the class of 2016 kept the work moving forward. 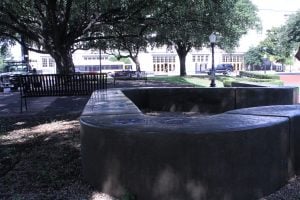 An engaging way to learn

Goldstein considers himself a facilitator in the process. The bench is an example of project-based learning, which drives much of the curriculum in the Architecture Cluster, a hands-on, college-preparatory program for students interested in architecture and related fields. The joy of this kind of learning, he says, is watching students engage with problems and solve them on their own.

“We present them with a driving question or problem,” he says, “like how do you design a piece of public furniture in this park? Then you let them generate their own ideas. It’s a quite organic process, and one the students did from the very beginning.”

After researching the site, the 30 students in Goldstein’s class proposed 50 or 60 different designs and then evaluated them on creativity and practicality, finally settling on what Goldstein calls the “J Scheme,” with long rectangular blocks that curve at the end to facilitate conversation. With the design selected, Marquis Lynch, class of 2016 Skyline alum, drew the plans.

“We wanted to have little pockets,” Lynch says, “where if you want to sit by yourself you can, but you can also commune with a group. That was illustrated through the movement of the bench.” 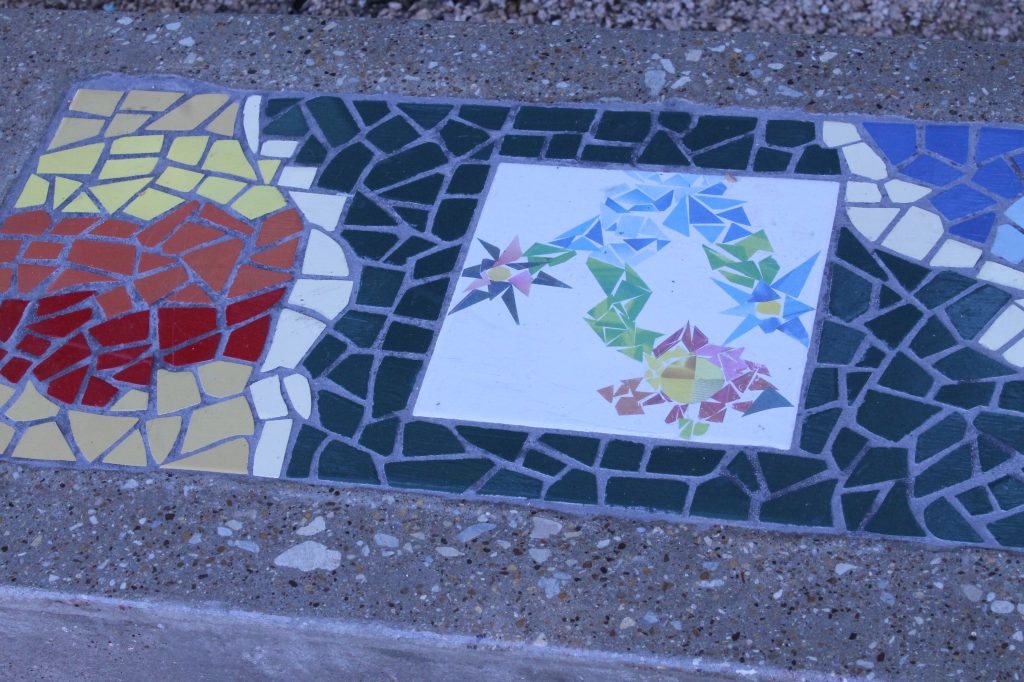 This mosaic was inspired by spring. The three flowers represent the three forks of the Trinity River. Photo: Francesca Paris

Lynch also designed one of the mosaics. His is primarily blue, with simple geometric shapes that he says represent rain water and lakes and a “warm summer vibe.” Other mosaics were inspired by the flora and fauna of the Trinity River. The mosaics may have been the most challenging part of the entire process: Martinez says that the students working on the center piece had to restart three times, when they made mosaic pieces that were too big or left too much or too little space between pieces. He and his classmates spent hundreds of hours sanding, occasionally suffering cuts and scrapes from the sharp edges of the pieces, learning both from failure and from local tile artist Cassandra Emswiler Burd, who came in to help them.

In addition to Burd, MAP and Downtown Dallas Inc., other organizations supported the students’ work: The Heart of Neiman Marcus Foundation, Art Conspiracy, The Beck Group and Osborn Contractors.

But it was the students in the Architecture Cluster from the classes of 2015 and 2016 who made the project happen. Students worked on the bench during free periods and late into the evening after school, even on weekends. One Saturday, with a deadline looming, Skyline alum Jose Beltrán says the students organized their own work day.

“After everybody agreed, then we told Mr. Goldstein, ‘We’re going to come Saturday, so you’re gonna have to come too,’” Beltrán recalls. “We didn’t give him an option.” He says they took initiative because their class wanted to finish the piece before graduating, and they did. 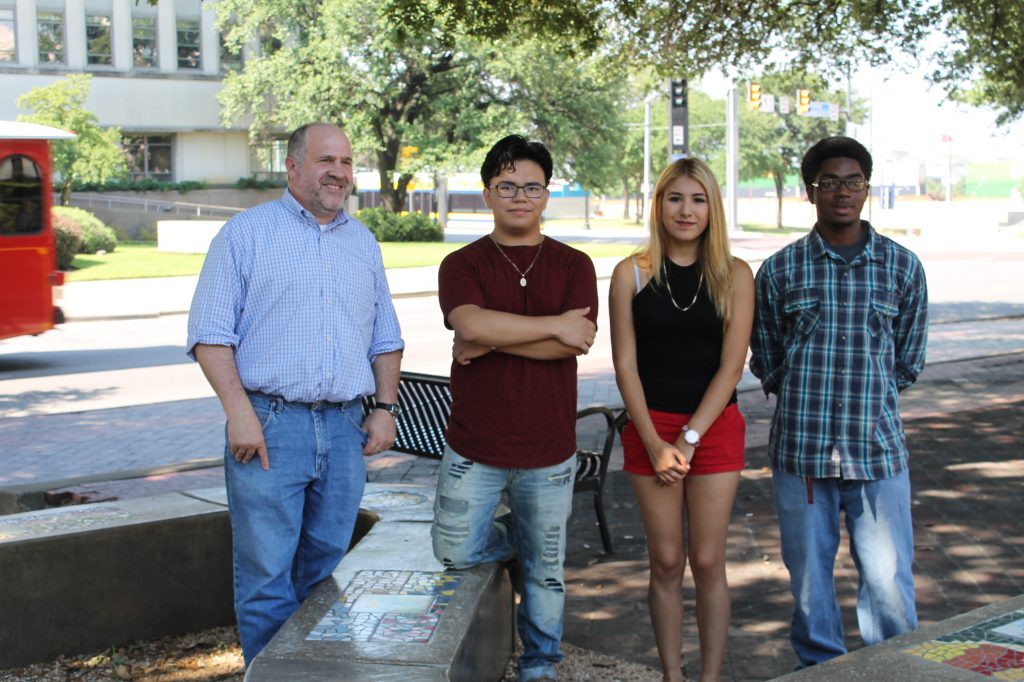 Beltrán, Tellez and Lynch graduated Skyline this spring. Their class built the bench with the help of their teacher, Peter Goldstein. Photo: Photo: Hady Mawajdeh

Many of the younger students who worked on the plaza are headed off to college now to pursue degrees in architecture and related fields, like Lynch who will study architecture at Texas Tech. Lynch says that Goldstein was a big help in his college search, providing him with all the information about what schools and programs to focus on.

“This really fit into their life plan,” says Engelstad of the project, “in a way where they got practical experience in something that also benefits our city.”

For the students, just being able to see people eat lunch on their project, or sit on it themselves, is a reward of its own. Martinez looks at the structure now and laughs, almost in disbelief. “Wow! We made a bench.”

“Ignite Ferris Plaza” will remain in Ferris Plaza until October. In September, Engelstad plans to program the site with poetry readings, music and art-making.