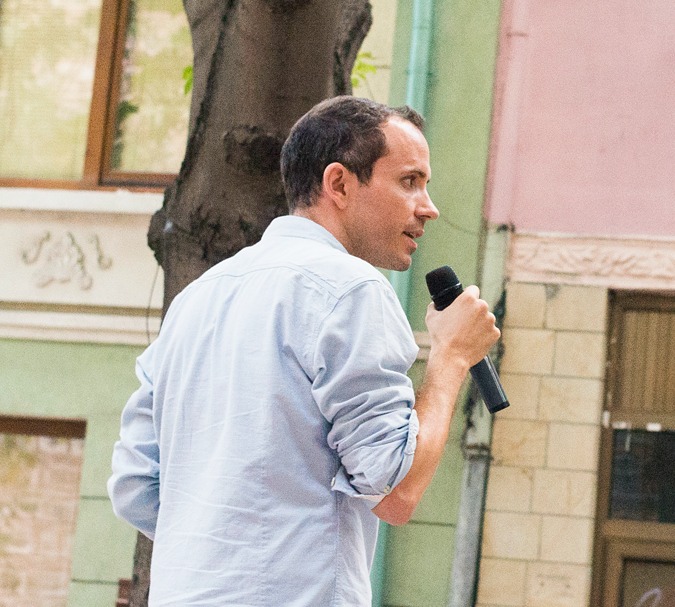 SMU’s Meadows School of the Arts has changed the format and reduced the amount of its annual Meadows Prize from two $25,000 gifts to one $35,000 award. Previously, the Meadows had been awarded to innovative artists for a residency at SMU. This time, the Meadows has become a founding partner of the conference-turned-touring show, ‘New Cities, Future  Ruins,’ created by the independent curator Gavin Kroeber.

Since it began in 2009, the Meadows Prize has been awarded each year to two distinguished, innovative artists or arts groups. Each winner received a stipend to teach or interact with students at SMU and, ultimately, to leave a “lasting legacy,” possibly a new art work or, as in the case of public arts organization Creative Time, a community-based effort.

But going forward, the Meadows will be awarded to a single initiative. In other words, the purpose of the prize has shifted from supporting or rewarding an artist (with an art work as a secondary benefit) to funding the project itself. And given the involvement of the school’s Ignite/Arts Dallas program in the awards, the projects are likely to concern social causes, urban design, arts practice and community engagement. The fact that curator Gavin Kroeber was a producer at Creative Time underscores this as well.

‘New Cites, Future Ruins’ will begin with a “hybrid conference and festival,” open to the public, in Dallas this November. Projects and events during the conference will concern the “ecological and social sustainability” of the cities in America’s Southwest, some of the country’s fastest-growing. The initiative will end with a touring exhibition and catalog next year. Other founding partners in this venture, in addition to the Meadows, are UT-El Paso and Arizona State University Gammage.

The Meadows Prize will serve as a catalyst to launch the new initiative, including a convening of artists, scholars and designers at SMU and in Dallas in November 2016

DALLAS (SMU) March 8, 2016 — The Meadows School of the Arts at Southern Methodist University has announced that its annual Meadows Prize will be awarded to the curatorial initiative, New Cities, Future Ruins, spearheaded by independent curator Gavin Kroeber. The $35,000 prize will provide seed funding for the project, which will create opportunities for visionary artists, designers and thinkers from around the world to engage the cities of America’s Western Sun Belt – some of the fastest-growing in the nation, grappling with urgent issues of ecological and social sustainability. The initiative will launch with a public convening featuring artists, architects, scholars and other luminaries, hosted by SMU at locations throughout Dallas November 11-14, 2016. The initiative will expand to include artist residencies and public projects around the region in 2017 and 2018 and will culminate with a touring exhibition and catalog. The SMU Meadows School will become a founding partner in the initiative, alongside The University of Texas at El Paso and Arizona State University Gammage. The Meadows Prize is awarded to innovative artists and creative professionals and is a key aspect of the School’s Ignite/Arts Dallas program, which integrates artistic practices with community engagement in Dallas and across the country.

“The Meadows Prize was created to recognize innovation in the arts, bringing some of the country’s foremost creative talent to the Meadows School to work and interact with students in ways that have a lasting impact on our wider community,” said Samuel Holland, dean of the Meadows School of the Arts. “We are excited to serve as a launching pad for this ambitious project and to be a part of the dialogue that New Cities, Future Ruins will spark.”

The Meadows Prize is awarded as a key part of Ignite/Arts Dallas, a program launched by the Meadows School to foster projects that integrate the arts and community engagement in the broader SMU campus, the city of Dallas and the arts field at large. Led by Clyde Valentín, Ignite/Arts Dallas aims to engage the Meadows School in deep relationships with the Dallas community, using the arts to foster connections between diverse groups, and to introduce its students to the arts’ critical role in social engagement.

“New Cities, Future Ruins looks to catalyze innovation by integrating the arts into the way we think about urban space and culture in our region and globally,” said Clyde Valentín, director of Ignite/Arts Dallas. “This project will encourage us as a community to take a critical look at how our city of Dallas and cities across the region are expanding and how creative practitioners and thinkers can play a vital role in this growth. We are excited to work with Gavin Kroeber and our anchor partners around the region to bring this project to life.”

New Cities, Future Ruins will engage the cities of the Western Sun Belt as arenas for pioneering art and design. The region, stretching from Houston to Denver and from Phoenix to San Diego, is home to some of the fastest-growing cities in the country, symbols of opportunity and entrepreneurialism, historic cradles of free market capitalism. Their path, however, may be unsustainable: located in delicate ecosystems, the unprecedented growth of these cities is marked by sprawl and resource overuse, dramatic demographic shifts and struggles over immigration. Some of the most pressing questions of our moment – questions of whether current ways of life can or should persist environmentally, economically and socially – are in few places as clear or as compelling as in these Western Sun Belt cities. Bringing critical and innovative art and design practice from around the world to bear on this urban landscape, the initiative seeks to foster visionary thought and artistic experimentation at these urgent sites, places that both embody and illuminate global crises of rapid urbanization.

“I am very grateful for the recognition and support that the Meadows Prize will provide for New Cities, Future Ruins,” said Gavin Kroeber, the project’s artistic director. “We have been energized by this award and will be thrilled to launch this ambitious project in Dallas, working in partnership with the SMU Meadows School.”

The November convening at SMU will be a critical first step for New Cities, Future Ruins, bringing the initiative’s founding partners together with an international network of scholars, curators, artists and designers. A hybrid conference and festival, it will be open to the public and will feature artists’ projects and events throughout the city. Among the many themes to be addressed are “Urban Boundaries,” or the ways regional development patterns, racial histories, immigration policy, urban planning and other forces have produced distinctive divisions between communities and industries; “Sustainability,” including issues of ecology, water, resource extraction, growth and environmental justice; and “Futurism and Its Ruins,” exploring images of the region’s future from the techno-utopian to the apocalyptic, taking careful stock of the ruins left by the Sun Belt’s rise (such as mining extraction sites) and the ways art can activate them.

ABOUT GAVIN KROEBER
New Cities, Future Ruins is led by Gavin Kroeber, an independent curator and critic whose work focuses on art and urbanism. In 2010, he established the curatorial collaborative Experience Economies, with Rebecca Uchill, which has presented event-based projects by artists Tania Bruguera and Theaster Gates, among others. Between 2005 and 2010, he was a producer at Creative Time in New York City, overseeing projects such as Paul Chan’s Waiting for Godot in New Orleans (2007) and David Byrne’s Playing the Building (2008). His work draws in equal measure upon visual art, urban theory, performance and cultural studies. His curatorial projects, performance lectures and writings are concerned broadly with dynamics of power in America and in particular their expression in the poetics of place. Kroeber’s recent projects include Landscape Experience (2015), a two-week session at the Mildred’s Lane art complex; Not Objects in the Landscape But A Landscape of Objects (2015), a performance lecture at Storm King Art Center; and At Home He’s a Tourist (2014), a series of performances and unorthodox dialogues orchestrated for One Architecture Week in Plovdiv, Bulgaria. He has written for Afterall, Art Journal, Art in America, PAJ: A Journal of Performance and Art, and Theater, among other publications. He holds a Master in Design Studies in art, design and the public domain from the Harvard Graduate School of Design.

ABOUT THE MEADOWS PRIZE
The Meadows Prize replaced the Meadows Award, which was given annually from 1981 to 2003 to honor the accomplishments of an artist at the pinnacle of a distinguished career. Re-envisioned in 2009, the Meadows Prize is now presented annually to innovative artists and projects in a discipline represented by one of the academic units within the Meadows School: advertising, art, art history, arts management and arts entrepreneurship, communication studies, creative computation, dance, film and media arts, journalism, music and theatre. The Prize includes support for a residency or program in Dallas, in addition to a $35,000 award. In return, recipients are expected to interact in a substantive way with Meadows students and collaborating arts organizations, and to leave a lasting cultural legacy in Dallas.