Skip Navigation
Home > ArtandSeek.net > Something Has Made Several North Texas Plays Newly Relevant – What Could It Be?

Theater companies plan their seasons months, even years in advance. But on North Texas stages the past month and in coming months, drama after drama suddenly seems pointedly relevant, even provocative. Local All Things Considered host Justin Martin sat down with Art & Seek’s Jerome Weeks to find out why audiences have been talking about these plays.

Jerome, you saw the play, ‘The Christians,’ last month at the Dallas Theater Center. It was about the pastor of a megachurch having a change of heart – and splitting his congregation, splitting his marriage. You told me director Joel Ferrell had a terrific cast, especially Chamblee Ferguson in the lead role, but what surprised you was what happened after the play.

JWAfter a show, theaters often hold ‘talk back’ sessions with audience members, and having dropped in on some, I frankly avoid them. They’re often sparsely attended, the questions from theatergoers tend to be predictable but most of all, the actors have been trained to bounce the question back to questioner, to encourage discussion — “That’s a great question. How do you feel about it?” — which means we’re probably not going to hear much that’s revealing from the actors themselves.

But in this case, after this performance of ‘The Christians,’ some thirty people stayed, all ages, men and women, white and black. That’s not the usual attendance at these things. And after the session got going, people even stopped asking the actors questions and started up their own little debates in the seats.

JW‘The Christians,’ as its title implies, is about faith, what it means to be a Christian, and that isn’t often explored in contemporary theater. So quite a few churchgoers seemed to be there, and they were really interested in the entire topic. But their discussions went well beyond quoting Scripture.

Theater Center artistic director Kevin Moriarty says, “Our audience responded to ‘The Christians’ as a post-Trump election play. It’s not what the writer meant, it’s not why we picked the play. And absolutely the conversation went there regularly in the post-show engagement and repeatedly in emails and letters: How does a family, how does a community, how does a nation hold together when we see fundamental beliefs in such incredibly opposite ways?” 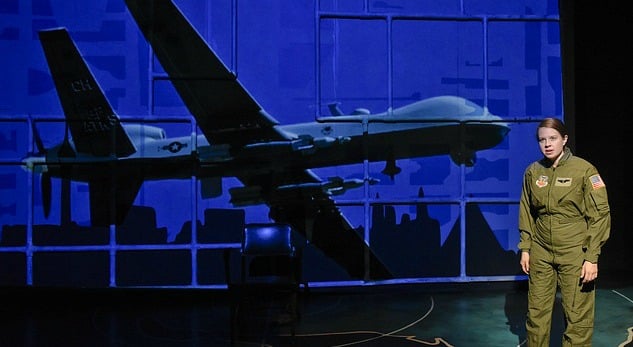 So you’re saying local stage shows, plays like ‘The Christians’ that really have nothing do with President Trump’s election – now seem to be saying something about Trump?

JWExactly. Now, that’s partly because President Trump and Republican leaders have targeted so many things for aggressive change. Healthcare, education, immigration, deregulation, NATO, the environment. Some plays were bound to be newly relevant. In January, Second  Thought Theatre presented ‘Grounded,’ a drama about a female drone pilot, and although President Obama was severely criticized (by many liberals, in fact) for pursuing al-Qaeda and ISIS leaders this way, the fact is our use of drone strikes had been dwindling the past year, particularly in Pakistan.

Within 48 hours of his inauguration, President Trump ordered his first drone strike — in Yemen. And of course, he has spoken often about seriously ramping up our military efforts against “radical Islamic terrorists.” So ‘Grounded’ had this whole new impact onstage — this wasn’t the recent past, it wasn’t just happening now. It’s our immediate future.

But these supposed political comments in these plays – you’ve said they weren’t really planned. All the seasons had been laid out well before November.

JWTrue. They weren’t planned. But I’ve come to see this as an advantage of what you might call ‘slow art.’ So much of the media, the internet, the art world, we’re all in the same frenzy, keeping up with the latest scandal or tweet or innovation. What’s this mean? What are the ramifications? We’re terrified of losing people’s attention, losing those younger eyeballs, without that now, now, now. Immediacy, relevancy — whatever the White House said last week is already forgotten.

But as the poet Ezra Pound put it, art is news that stays news. And art forms like theater, museum exhibitions, operas, they are all still handmade. They exist on a schedule that doesn’t exactly Adrian Hall, the former artistic director of the Dallas Theater Center, liked to say that the time it takes to rehearse and perform a drama hasn’t changed in more than two thousand years.

But sometimes, by the time a season rolls around and a play gets up onstage, events have electro-charged it. Along comes an antique, a 60-year-old play, for instance, ‘Inherit the Wind,’ which the Theater Center will present in May —

That’s the account of the famous Scopes ‘Monkey’ trial — right? The teaching of evolution vs. fundamentalism back in the 1920s?

JWRight. And of course, that evolution debate’s still going on, the terms have just morphed into creationism or intelligent design, but the push to get them back into public schools remains, especially in conservative Southern states like Texas.

But in today’s heated political atmosphere, the original play by Jerome Lawrence and Robert E. Lee that debuted in Dallas in 1955 has gained an even wider resonance. It’s the entire idea of employing science in political frays, biased science in partisan arguments, like the entire, high-stakes war over global warming. Which facts do you believe?

The same thing holds with ‘Galileo’ – that’s the 70-year-old play by Bertolt Brecht currently being given a very handsomely-designed production at the Undermain Theatre.

Bruce Dubose as the title character in the Undermain’s ‘Galileo.’

Another battle over science vs. religion!

JWRight, but actually, it’s not that simple, although that’s the way many people want to see it. In the 16th century, Galileo used the new invention of the telescope and saw that other planets had their own moons, the heavens weren’t perfect, the earth revolved around the sun. All of which defied traditional teachings.

Here’s Bruce Dubose as Galileo defending himself before Church authorities: “For 2000 years, we’ve been looking at the sky, we didn’t see the four moons of Jupiter, and there they were, all the time! Why defend shaken teachings? You should be doing the shaking.”

So we in the audience congratulate ourselves for being post-Enlightenment, for siding with this heroic, defiant man of science. But typical of Brecht’s re-writing habits, he actually changed his ideas about Galileo several times and the play reflects that. I’ve never seen a production – including this one directed by Katherine Owens – that truly manages to get a handle on him. Brecht re-wrote and co-wrote this version in 1947, not only with the great actor Charles Laughton but — because Laughton didn’t know German and Brecht’s English wasn’t very good — with two young writers Laughton hired from MGM, Brainerd Duffield and Emerson Crocker. And all of this was after America dropped the atomic bomb, which Brecht considered a monstrosity. Upholding science as a greater good got a serious case of radiation poisoning.

So that’s why, towards the end of the play, the aging, beaten-down Galileo suddenly delivers this odd speech — it seems to come out of nowhere — about his fears that this new science he’s fought for his entire life may eventually unleash horrors.

What’s more, Galileo himself originally appears as a classic Brechtian survivor — like Mother Courage, like Mack the Knife — not heroic but admirable in his tenacity and wiliness. He eludes the Inquisition, defies it, tries to work around it.  But then he caves in. This almost Falstaffian life force of eating and drinking and thinking and testing and doubting now berates himself as a coward. He even repudiates his lifelong pursuit of a science that didn’t directly ‘ease human existence.’ What are we to make of such a character?

The Inquisition. That’s right. This is also a play about a man facing torture – which is also certainly relevant these days.

JWTragically, yes. During his campaign, Donald Trump boasted of bringing back waterboarding — “and worse things.” He supposedly changed his mind after General James Mattis convinced him torture didn’t produce reliable results. But that’s been seriously disputed.

In her pre-show curtain speech at the Undermain, director Owens expressly pointed to Brecht’s relevance today in terms of immigration and the international refugee crisis. Brecht fled Nazi Germany in 1933, eventually making his way to America. We took him in, Owens said. A point of pride, an anti-Trumpian openness. But she could have added yet another ironic, relevant wrinkle to our current immigration crackdown: Brecht also fled America. Or was driven out, depending.

Five weeks before Laughton debuted on Broadway in the title role of ‘Galileo’ in 1947, Brecht was called before the House Un-American Activities Committee, along with a host of other Hollywood writers. With the committee, he dissembled, joked and mumbled, pretending not to understand what was being said  — not unlike Galileo before the Inquisition. In fact, Brecht later also berated himself for being a coward. The day after his appearance before the committee, he went to New York, checked on the production and that night flew Air France to Paris.

History keeps catching up with us, no matter how fast our modern world spins. Consider Jubilee Theatre’s current show, ‘Thurgood.‘ It’s about the great black civil rights attorney and Supreme Court Justice Thurgood Marshall. Without having to spell out a single thing, the play, just by its subject, reminds us of what a difference a choice for the Supreme Court can mean. But when I talked with Bill Ray, Jubilee’s artistic director, he said he longs for the day when ‘Thurgood’ really is history, really is in the past.

Because an issue like denying black Americans the right to vote? That’s still painfully current.