Think of Claude Monet, and images of haystacks and water lilies come to mind. But in his 70s, after the death of his wife and son, with his eyesight impaired, the famous Impressionist painter dramatically re-worked his painting style – until some of his canvases looked almost radically abstract, luxuriating in nothing but color. These works weren’t appreciated until decades after his death – partly because Abstract Expressionists began looking to Monet as a precursor to their own efforts. In State of the Arts, George Shackelford, Deputy Director of the Kimbell Art Museum, tells me about the new exhibition, “Monet: The Late Years.”

The Monet that we knew, those lovely blues, the water lilies, opens the exhibit, but then, things really take a turn. You have a couple of surprises in the exhibition for us.

GSOnce you leave the comfort zone of the introductory gallery, you are plunged immediately into a section of the exhibition where everything is suddenly bigger than you would have anticipated, where virtually every painting measures at least five feet, in one or the other dimension, and a lot of that is, I think, unfamiliar to most visitors. 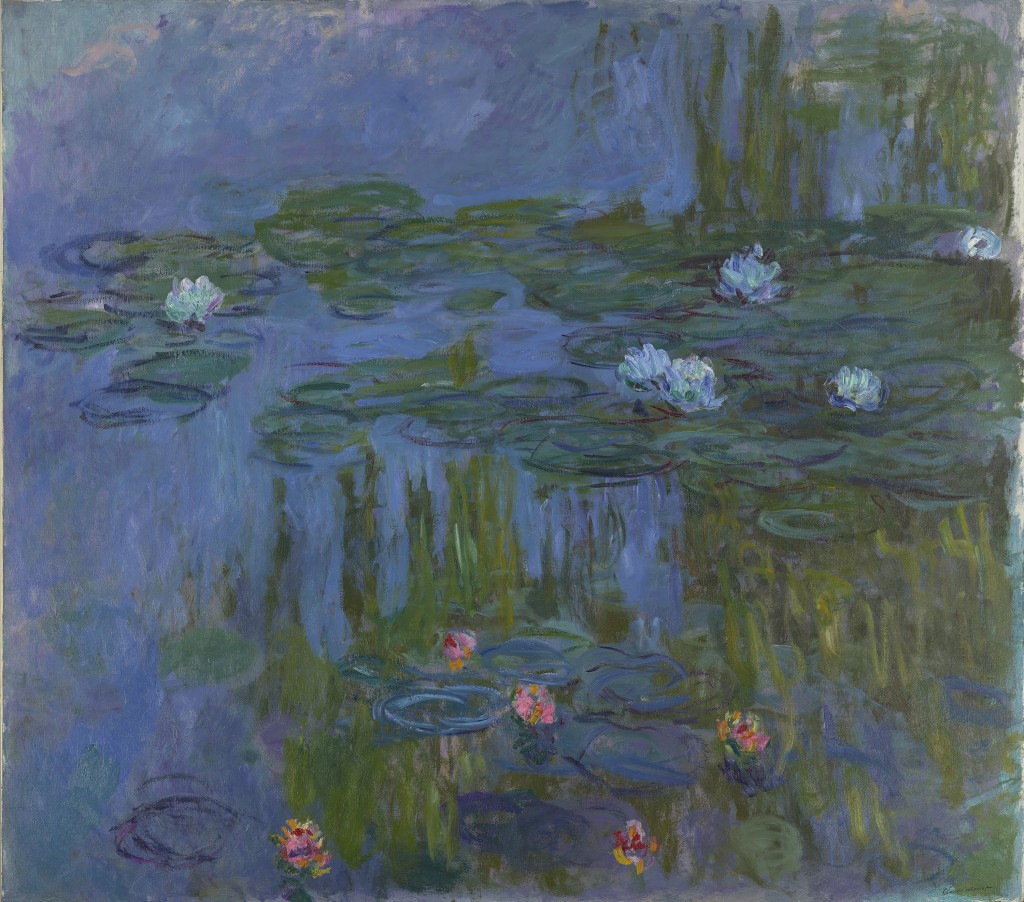 To see Monet so large.

GSSo large, exactly. But in parallel with all of that, and yet, presented in the second room, is another aspect of Monet that I think has really not been given the attention it deserves. And that is the paintings that are on a smaller scale, paintings that, where Monet’s attention was brought to taking a large subject and making it smaller, and more intense, almost by reduction. As we discuss in the exhibition, he’s also dealing with a question of his eyesight. And he has cataracts, and the cataracts are changing the way he sees, and providing him with a kind of hurdle that he has to figure a way over. You can get close to them and see how beautiful he’s managing the paint.

So, even though his eyesight was declining, he was still maintaining control of his work.

GSThat’s certainly my contention, absolutely. And I think you see it best when you are right in front of the paintings, and you see, for instance, with one brush, he’s picked up two different colors of red, a bright one and a dark one, and laid them onto the canvas in one stroke. That’s not something you do if you don’t know what you’re up to.

Or what color you’re using. 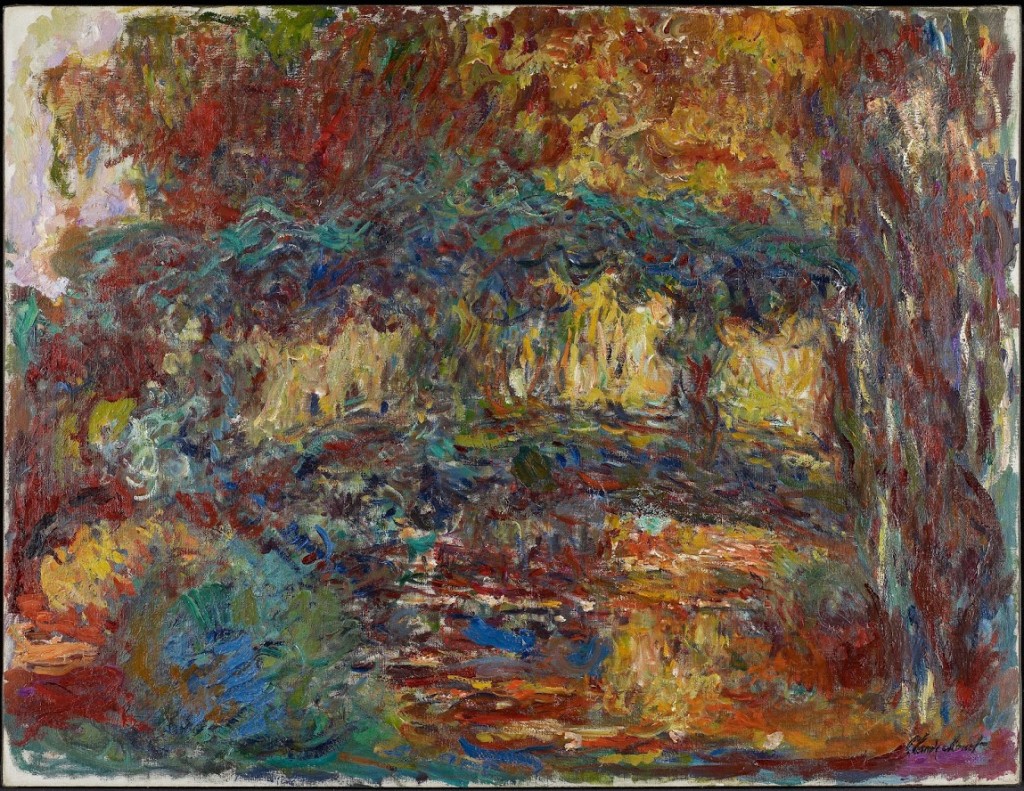 But those paintings look so different, too. They’re almost abstract.

GSThey are. Sometimes, if you’re not following along, you might lose track of the subject. There is, for instance, a range of seven paintings of his Japanese bridge. And at the beginning of the sequence, we do give you a picture of the Japanese bridge with Monet standing next to it, a photograph, so you can see what it looked like to a photographer’s lens. And then you see, through the lens of Monet’s eyes, how it progresses to become more and more loose, and there’s frankly one painting in the series, where, if I just pulled it out and showed it to you independent of the others, you might find it hard at first to perceive the arch of the bridge, the supports that hold up the pergola. So, I think there are some moments where he really comes right up to the edge of painting something that isn’t there. But it’s always based on something he’s seeing. 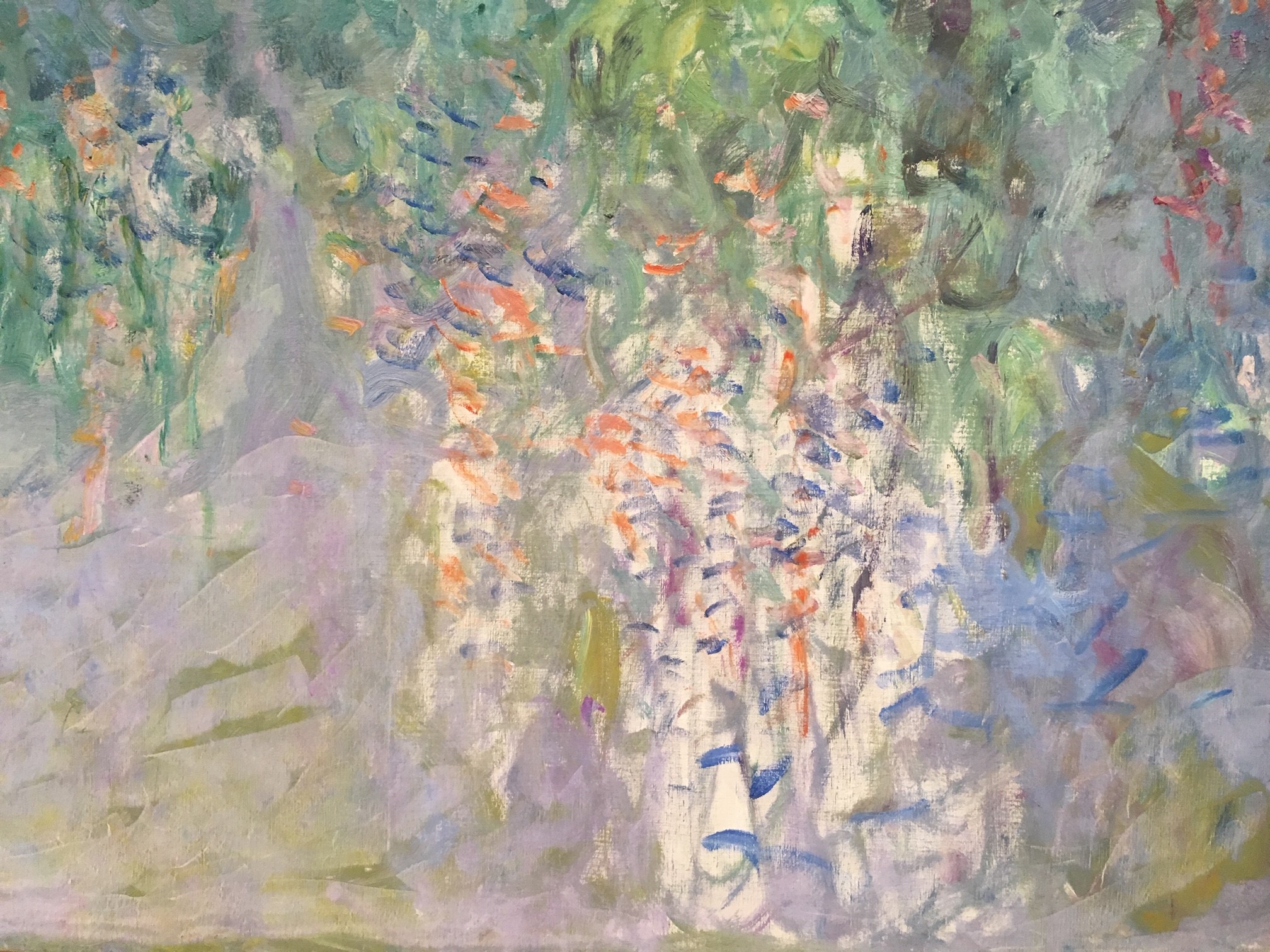 Detail from ‘Wisteria,’ 1919-20. showing Monet’s use of naked canvas through his painting strokes. Photo: Jerome Weks

You’ve said that these works redefine how we see Monet. What did you mean by that?

GSWell, I mean, most people see Monet as a painter of grainstacks, or poplars, or fields of wheat, and that is all absolutely right. I think that once Monet gets to be in his 70s, he wants to change the visual aspect of what his works look like, and he wants to challenge a new generation, who are the young people who have come up since he was already a master of Impressionism. And he wants to surprise people. And a lot of what he’s doing in the end of his life, is about creating something that will be novel, and which, in a sense, will redefine what people think of Monet as being. 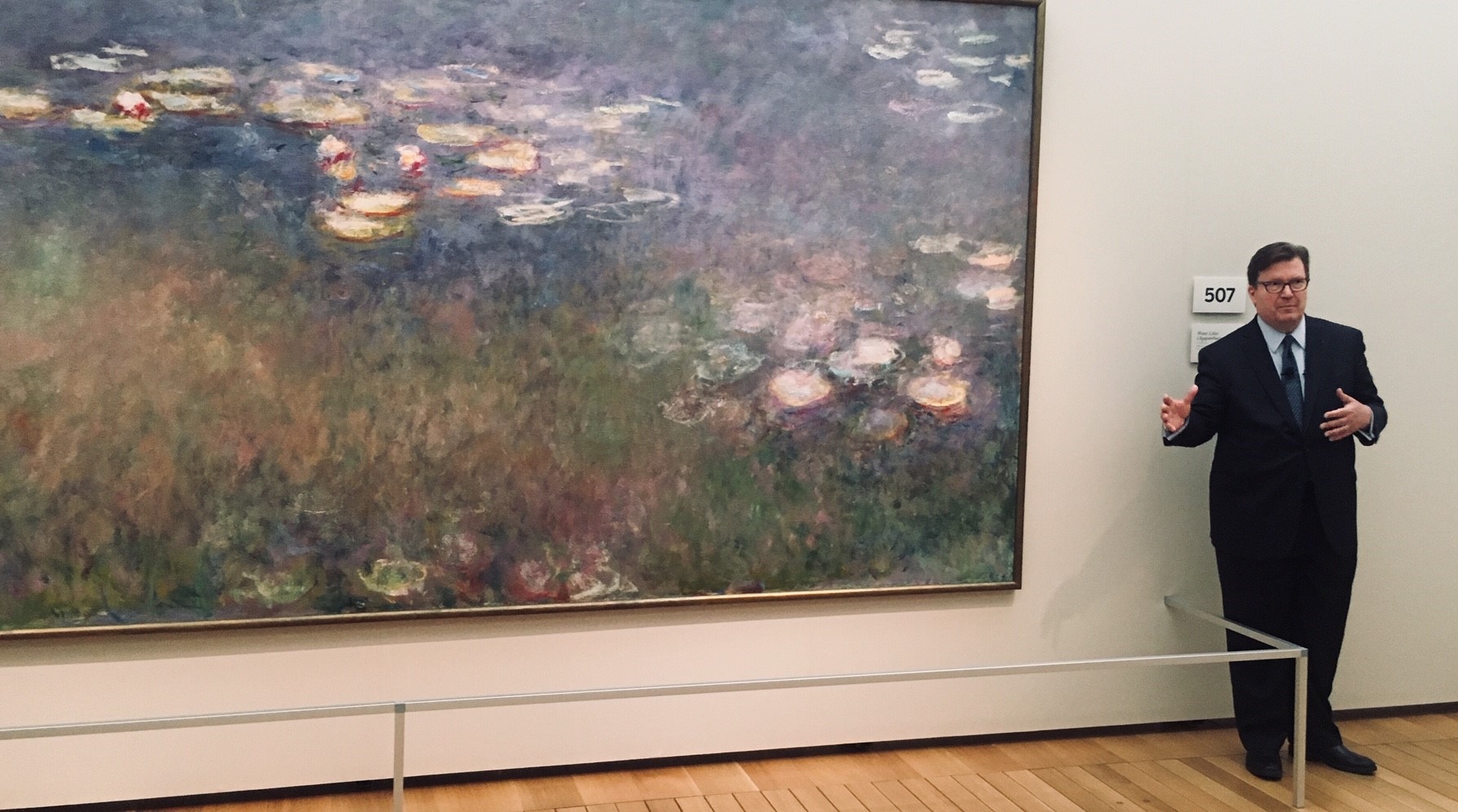 So that, after he dies, this legacy of work that is unknown to the public during his lifetime, suddenly is revealed, and the late work of Monet, the late years of Monet, comes out as a phenomenon that we have to reckon with.