AUSTIN – In “A Bad Idea Gone Wrong,” Leo and Marlon are a couple of wannabe criminals with more ambition than know-how. So they decide to break into a house in a gated community that they know to be unoccupied. In mere minutes, they manage to find a hidden key, let themselves in and then arm the alarm from the inside – trapping themselves in the house.

Thomas Crown, they are not. 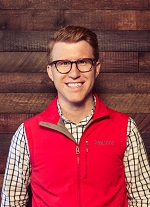 On top of that, Marlon soon realizes that Leo has targeted this house for more than a material score.

The movie, which filmed in Fort Worth, debuted Saturday afternoon here and will play the Dallas International Film Festival in April. It’s the fifth feature film produced by Red Entertainment, the production company run by TCU grad Red Sanders. I caught up with him a few hours before the debut:

You have a lot of experience making commercials through your company Red Productions. Lately, though, you’ve spent a lot of time making features.

Building off the success of the commercial and short-form storytelling, we’ve always tried to be in both the short world and the long-form world. We love narrative content just as much as we love commercials – and [director Jason Headley] was a commercial director we’d worked with as well.

That’s interesting the idea of a commercial as a short story – a lot of filmmakers will tell you if you can’t tell a story in a short amount of time, you definitely can’t do it in, say, 90 minutes.

Now days, you see a lot of short brand films online that provide great ground to test creativity. And it’s almost harder to tell the story in a compact amount of time. At the same time, it’s certainly different when you scale that up to 90 minutes or two hours.

What made you think “Bad Idea” was a good fit for you?

As a first time feature director – or at least hoping to be – Jason was smart to write a script that’s a contained story. It takes place mostly in a house, and he did that in a way that didn’t sacrifice the creativity. I remember the first time I read the script, it’s such a page-turner. So yeah, something that attracted us to it is Jason’s unique comedic voice and his ability to tell a really engaging story in a confined space. … It was fun from a production standpoint to get to be in one place. So often in independent film you’re at a different location every day – sometimes twice a day. It was really nice to be able to just unload and move in for three weeks.

One nice thing about shooting in a house is if you need a break, there’s always a couch to plop down on.

Yeah, and the actors didn’t have to have a trailer outside – it was like, “Here’s a dressing room for you!”

Did you learn anything making this film that you’ll use going forward?

Don’t shoot a movie between Thanksgiving and Christmas. We thought that was a good idea when we started out – it’s kind of a downtime for most people. What we learned is that there’s not a single day of wiggle room.