I’m attending the 23rd annual SXSW Interactive conference, exploring a variety of issues and inspirations currently surfacing in the world of technology. Follow @mkatevans for quick updates throughout the weekend and check back with Art&Seek for full stories.

Abbi Jacobson and Ilana Glazer may not seem like “control freaks” in “Broad City,” but they take writing, producing and starring in their hit television show seriously. Though they admit to having an amazing team of writers — something that came after their web series born in 2009 grew into a Comedy Central staple by 2014 — they don’t hand off the baton at any point in the process.

“Each episode is so precious,” Glazer said. And though the process of writing, shooting and editing the show is “fast,” according to Jacobson, creating an entire season takes 10-11 months.

“We’re all ‘Broad City’ all the time,” Glazer said.

Now in the third season, Jacobson and Glazer still play absurdist versions of themselves as two friends navigating their 20s in New York City. But the simple premise allows for creative freedom as well as intensely strange character development through situational comedy.

At SXSW Interactive, Glazer and Jacobson discussed the depth and scope of their show with Marie Claire’s editor-in-chief Anne Fulenwider.

Both in their real lives and in the show, Jacobson and Glazer have a strong female friendship — one built on a non-competitive but extremely motivational creative collaboration. When they find time to pursue individual endeavors — Glazer starring in a new show, “Time-Traveling Bong” and Jacobson illustrating coloring books — each woman is the other’s counsel and confidant, they said.

This kind of relationship is something relatively new as millennials have grown into their 20s, Glazer said. Women (and men) are getting married later, so primary relationships are friendships that spawn after college, when you meet someone in a new city — either New York, Austin, or any other place unfamiliar — and the friendship’s foundation lies in the novelty of it all. Glazer mentioned a recent New York Times article on the topic.

Building on that shared bond, Jacobson and Glazer brought their individual comedic perspectives and life experiences in general to their show. As a proficient drummer, Glazer contributes knowledge on the musicality of comedy. Each joke has three beats, she said, and comedy has a formula.

“Two times is a coincidence. Three is a pattern,” she said. 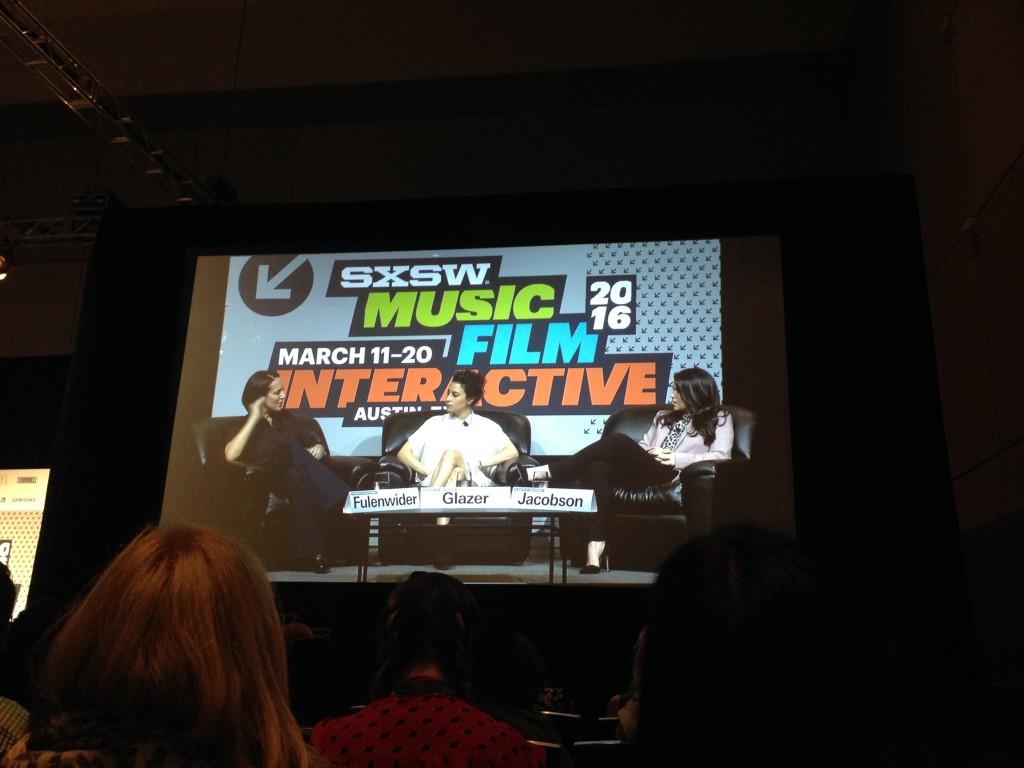 And Jacobson, who portrays the more clean-cut counterpart to Glazer’s free spirit, brings her background in visual arts to the production. Jacobson spoke on how the costume choices for each character helps to amplify their existing everyday personalities. An example: For Jacobson, a pair of purple clogs would be considered ostentatious, and for Ilana, having a hat made of Legos or color on her bare stomach would be the equivalent.

Not only have the character sketches become clearer throughout “Broad City’s” existence but so has its sociocultural voice.

Fulenwider of Marie Claire described the show as “feminist” — a label new but exciting for Glazer to hear. She and Jacobson do not write or produce anything they don’t believe in, Glazer said, so to have their show engage their viewers with the creators’ personal belief in and practice of feminism made Glazer “stoked.”

The women put forward an off-handed, progressive and genuinely fun-loving perspective on daily life in a big city that many could and would use in a PowerPoint presentation on millennials. While people in their 20s and 30s are indeed the target audience, Glazer said reaching older generations is a big accomplishment, particularly because “Broad City” reveals what’s acceptable or “normal” for millennials in terms of technology, sexuality and youth culture.

“The Internet is making everyone a millennial, ” Jacobson said both ironically and profoundly.

Either way, the show is making a specific representation of millennial life accessible via television — a revolutionary act, Fulenwider said.

“[It’s a] privilege of living a liberal life, and it’s a privilege to show how fun it can be,” Glazer said.

Watch more on the rise of “Broad City” from PBS Newshour: