I’m attending the 23rd annual SXSW Interactive conference, exploring a variety of issues and inspirations currently surfacing in the world of technology. Follow @mkatevans for quick updates throughout the weekend and check back with Art&Seek for full stories. 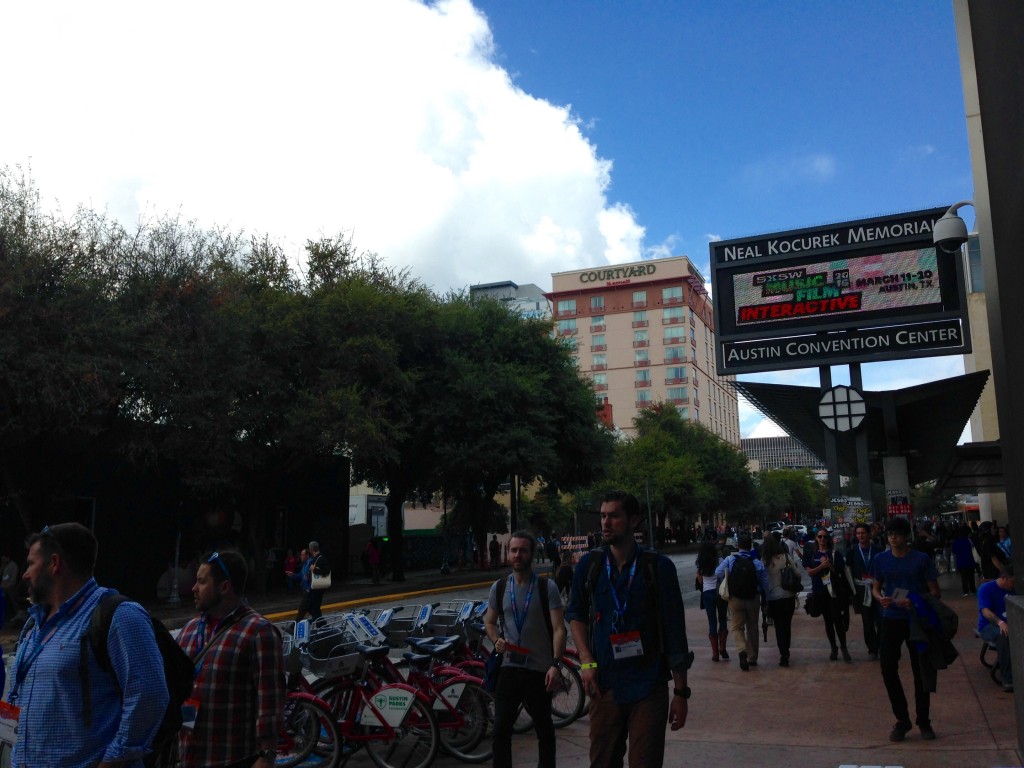 Outside the Austin Convention Center in Downtown Austin on Friday, March 11, 2016.

Diversity and technology or diversity in technology. What’s the difference, and what’s the more pressing issue?

Based on the consensus from two different Interactive sessions on the topic, as well as President Obama’s keynote on the digital divide and accessibility, there isn’t a difference in how you spin it. Diversity in technology is a matter of opportunity — to get jobs in the industry, to engage the public in civic participation and to regard people’s ethnic differences as valuable assets.

"We cannot solve the problems in government unless we, the people, are paying attention." @POTUS at #SXSW

Unconscious bias is formed from the day we open our eyes, Quinton said. It’s fundamental yet invisible, a part of our “hidden brain,” rather than the part we use to reflect consciously on issues, he said.

“[Unconscious bias is] the insidious underbelly of how we make decisions,” Slate said.

Unconscious bias has the same impact against diversity and our ability to accept differences as conscious bias does, Slate added.

Quinton provided a shocking example in how technology can render the same bias as a human. Google Photos uses an algorithm and facial recognition software to identify people, places, animals and things in images. In one instance that went viral, a black man and his friend were identified as “gorillas” in the app. Read a story from Mashable on the incident.

Quinton didn’t apologize for Google’s mistake, but he explained how technology is contributing to unconscious bias not as an act of malice but as a result of our human condition. The issue now exists at the “machine level,” Quinton said. And it’s stimulating conversation among humans at an emotional level.

“The conversation is moving from uncomfortable to unpredictable,” Slate said. “We have to examine how to interrupt bias in the long-term.”

Slate said unconscious bias needs to be interrupted to forge “the pathway to unleash potential of people.”

How does one interrupt unconscious bias, when that area of person’s brain operates on autopilot?

Maxine Williams, Facebook’s Global Director of Diversity, said she doesn’t like to use the word  “blind” as a suffix (i.e. colorblind). The word neutralizes the unique characteristics of individuals in order to see them as an equal rather than accentuating those characteristics as assets.

Williams lead the discussion “Diversity in Tech: Building Inclusivity.” She outlined several initiatives and projects the social networking company has started as steps toward a solution to conscious and unconscious biases in technology and society.

At a glance, here are the initiatives:

Williams said there are random and “unnatural barriers” in society — where you were born, what level of education your parents’ had, and what’s being taught in your school that prevent many people from reaping the benefits of careers in technology.

“It’s very rarely your own essential ability,” she said, that prevents someone from success.

Williams played this video illustrating how this disparity is being addressed through TechPrep:

“We need to start telling people the way forward. Once you open that door — just a tiny bit ajar — they will run through,” Williams said.

President Obama spoke in the same vein discussing how accessibility of technology encourages participation from the public — a public that’s inherently diverse.

"We want to create a pipeline where there's a continuous flow of talent" – @POTUS https://t.co/NqEB88sgiF

Resources are available, but it shouldn’t have to be that hard to come by, Williams said.

“[We’re] trying to get to a place where the country can supply what we demand,” Williams said. “We want to have more perspectives, so we can build better products and have better lives.”