AUSTIN – Wyatt Cenac is many things to many people. The young woman sitting next to me on the SXSW shuttle Saturday night adores him as a writer and sometimes voice on “King of the Hill.” The crowd gathered at Esther’s Follies a little later was ready to laugh at “Night Train with Wyatt Cenac,” a comedian showcase he hosts for the streaming comedy site Seeso.

For others, the Dallas Jesuit High School grad is first and foremost the Emmy-winning writer and correspondent for “The Daily Show with Jon Stewart.” 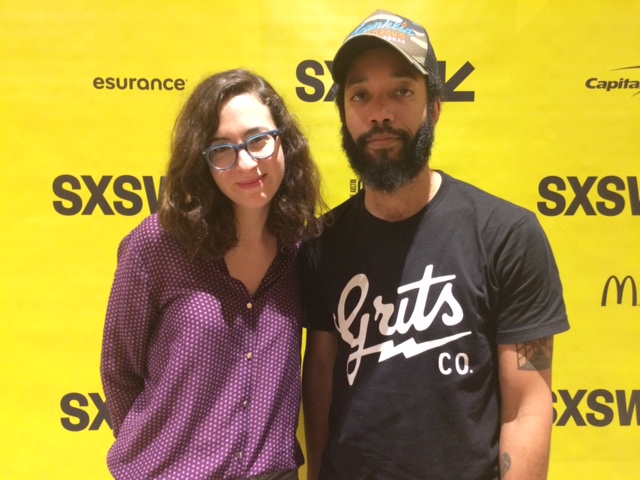 For his new movie, “Fits and Starts,” he balances out the funny with a nuanced, yearning portrayal of David, a writer at odds with the self-promotion in which writers have to participate in order for their work to reach a wide audience. What’s worse, his wife, Jennifer, (Great Lee) is in the middle of a victory lap for her second straight bestseller. The fact that she was once his protégé doesn’t help, either.

“He has this truthfulness to his acting and exudes this intelligence and soulfulness, and I knew that that’s what the character David needed for this film,” Terruso said during an interview on Saturday afternoon. “Not to mention he’s got a killer beard.” (The beard doesn’t make it to the end of the movie – a tough loss since Cenac says he’d been growing it since he was 7.)

“Fits and Starts” centers on a pretentious salon David and Jennifer are invited to at the Connecticut home of Jennifer’s publisher. It’s an opportunity for David to read some of his work to an audience of influencers. David, though, is not a creative type who thrives with a deadline hanging over his head. And so words are written on paper, crumpled up into a ball and tossed into a trash can over and over again.

And that’s where the comedian has an advantage over the novelist.

“The nice thing with standup is that, ‘OK, this idea didn’t work. But you know what – I’ll put it down and I’ll bring it back out, I’ll tinker with it and maybe a month later, three months later, I’ll try it again.’ Or I’ll try it again later that week or later that night,” Cenac said Saturday.

Updating and republishing a book is maybe unrealistic for most writers. But Cenac says there should be room for artists to revisit their work even after it’s been released into the world.

“I used to always think it would be fascinating if “The Simpsons” took an episode from one of the early seasons and just redid it. Now that you’ve figured out the way the animation looks – it’s kind of set in stone in a way – and you can do things that you couldn’t have done 20 years before. I’m into that idea,” he said. “If you’re a musician, why not try to rerelease your first album, but maybe look at the lyrics now from the perspective of somebody 20 years older. Does that change the music? Does that change the way you approach it? I think there’s space for that in the world. It’s just that so much of consumer culture is built on this idea that, ‘We want the final draft.’”

And, to be fair, Cenac stands with those who hated George Lucas’ tinkering with the original “Star Wars” trilogy decades after its release.

After Jesuit, Cenac headed off to the University of North Carolina and onto New York City and his ever-growing career.

He does have a few fond memories of his time growing up in Richardson, though. The first thing that comes to mind is the old Richardson Public Library.

“I just loved that building,” he said. “It was this old, brutalist style. You went in and it was wood and metal steps when you went up to the second level. I was never a kid who liked to read a lot, but I liked being in that space.”

His other favorite place was a Richardson park that featured a giant robot on the playground. Adventurous kids could climb all the way up into the robot’s head and slide down his metal arms.

“It was this weird robot kid prison. But on a really hot day, because the whole thing’s metal, you were kind of interested in it – Oh the robot! – but then also terrified of it, because it’s hot. And also, it does look like something out of Burning Man. It was like a children’s Burning Man.”

Fingers crossed Cenac takes the idea of a children’s Burning Man and runs with it.