Robin the robot has a friendly face, a cool space suit and a serious job.  She teaches children with autism spectrum disorder how to interpret emotions,  learn social skills and calm themselves.  Robin, and her brother, Milo, were developed by a Dallas company called RoboKind.  In State of the Arts this week, I spoke with Richard Margolin, the company’s founder, and Souphia Ieng, creative director, about the art behind their robots.

When we think of making robots, art’s not necessarily the first thing that comes to mind. Where does the art come in with these robots?

RMArt plays a big role in the design. I mean really, we’re designing a character. So we really wanted to pick a character feeling that was kind of friendly and kind of young, because most of the people we are working with are younger kids. And then, the body design, we wanted something that was fun and kind of superhero-esque. And then there’s a lot of other weird constraints when you’re doing a character design that has to be made physically versus just an illustration or animation, because underneath her face is eight motors and hundreds of pieces of mechanism that all have to work together and move.

And so it’s a very weird project that is a mash of engineering and art that comes together into what’s effectively robotic moving sculpture.

Richard Margolin will be one of the panelists at Arts Healthcare Breakfast: Designing the Future, presented by Business Council for the Arts, June 20 at The Fairmont Hotel
SIArt comes in when the robot is trying to communicate  a certain topic or concept.  The robot has a chest screen that will display visual supports that will scaffold what she’s saying to make an auditory-visual connection for a student. It’s kind of like subtitles.

So we went with black and white, with just clean lines, vector lines. You might think, oh, I’m a lazy artist because I just drew a stick figure and threw it into the icon, but it’s actually really well thought out.

Part of that is because people who have autism can be overcome by stimulus, right? So they need something simple to focus on.

SIYes. No distractions. There’s no way to misinterpret the icon.

Her facial expressions change, and part of that is to teach children to be able to recognize what happy looks like, or what you do when you say hello.

RMExactly. And going back to what Souphia does, she’s done the illustrations, she’s done the animation, all the movement in the robot she’s designed, as well as tons of other things. It’s pretty incredible the breadth of the work she’s done.

It all starts in traditional 3D simulation software, and then we’ve developed software pipelines, so she can work like an animator and then pump it out to the robot and see the real-world effects of what she’s created. 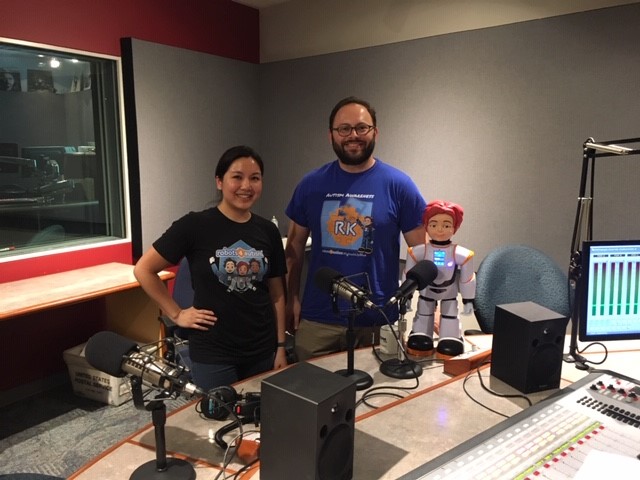 Souphia, you studied art and technology at University of Texas- Dallas. Did you consider yourself more of an artist or more of a tech person?

SII definitely considered myself more of an artist. I wanted to go into film or video games. I just wanted things to look cool and be pretty.

I had no concept of how this could be a functional skill. Something practical, like creating an animation controller that controls an real physical robot through using a 3D avatar that I created.

You’ll be speaking at the Arts and Healthcare Breakfast presented by Business Council For The Arts.  What interests you most in the ways those two disciplines intersect?

RMIt’s really important, and I think it’s underappreciated sometimes, that technology is a creative outlet for a lot of people. What we do is high technology, absolutely, but, it enables kids to express themselves more effectively, both with respect to what we’re doing with autism, and with coding. [RoboKind also developed Jett, a robot that teaches third to fifth graders how to code.]

So I think it’s really important to not really draw hard boundaries between arts and technology.

And then, to bring it into health care, what we’re doing is helping a lot of kids with autism  learn to communicate more effectively. The sum of everything we do – its the icons its the video modeling,  we’ve had to create our own visual art language, we’ve had to create our own movement in animation,  and learn to be video directors and producers and all kinds of stuff — all of that is towards the goal of helping kids with social, emotional and behavioral deficits learn to overcome those, so they can be more productive, effective and independent.

This robot has been very effective, right? What does it feel like to create something that has this kind of impact.

I never saw myself as someone who’d be part of a project that’s really helping people. I really went to school to entertain people. This feels a lot more rewarding.