Just in time for Halloween, the Undermain Theatre is streaming a solo performance about a cynical Irishman’s encounter with something supernatural.  The theater’s online production of Conor McPherson’s St. Nicholas has won acclaim from The Wall Street Journal. KERA’s Jerome Weeks talked with actor Bruce DuBose, the company’s producing artistic director, about playing a bitterly funny theater critic who wrecks his own life.

Bruce, in Conor McPherson’s drama, St. Nicholas, you play a drunken hack of a theater critic who recounts his meeting with a vampire. The critic is something of a satiric character. He’s mean and funny, but he’s also rather sad, gripped by this passion, this mid-life crisis. And you seem to treat him seriously.

Yeah, well, he’s a very deep person, but he’s always confronted by what he feels like are his limitations, and he keeps trying to make up for this with this horrible behavior. And even though he’s very misanthropic, it seems to me he’s looking for something deeper in his life. He’s lost touch with how to access, I think, a deep, meaningful existence.

In fact, I think reviewers have tended to focus on the portrayal of the cynical critic – for obvious reasons – and the vampires he meets. They’ve overlooked that St. Nicholas is really a play about the critic’s own redemption.

Yes, as a matter of fact, when Blake and I started talking about it – Blake Hackler, the director – we felt like there’s something about the play that seems like a confessional. Or getting up to speak at an AA meeting, what that might be like.

One thing that distinguishes Conor McPherson from his fellow Irish playwrights like Martin McDonagh is he’s really invested in the traditions of Irish storytelling, in the supernatural and in really weaving a spell.

It really is the great art of storytelling. Sometimes, I can imagine that when he’s writing it, he just says, ‘Well, this can go anywhere, and I’ll just let it go where it seems to want to go.” Because, with St. Nicholas, it starts out with, yeah, this jaded critic – he almost seems sort of stereotypical – but then it takes on this metaphysical edge to it.

And then the story just goes somewhere that you don’t really expect it to go. So that is really one of his big gifts. 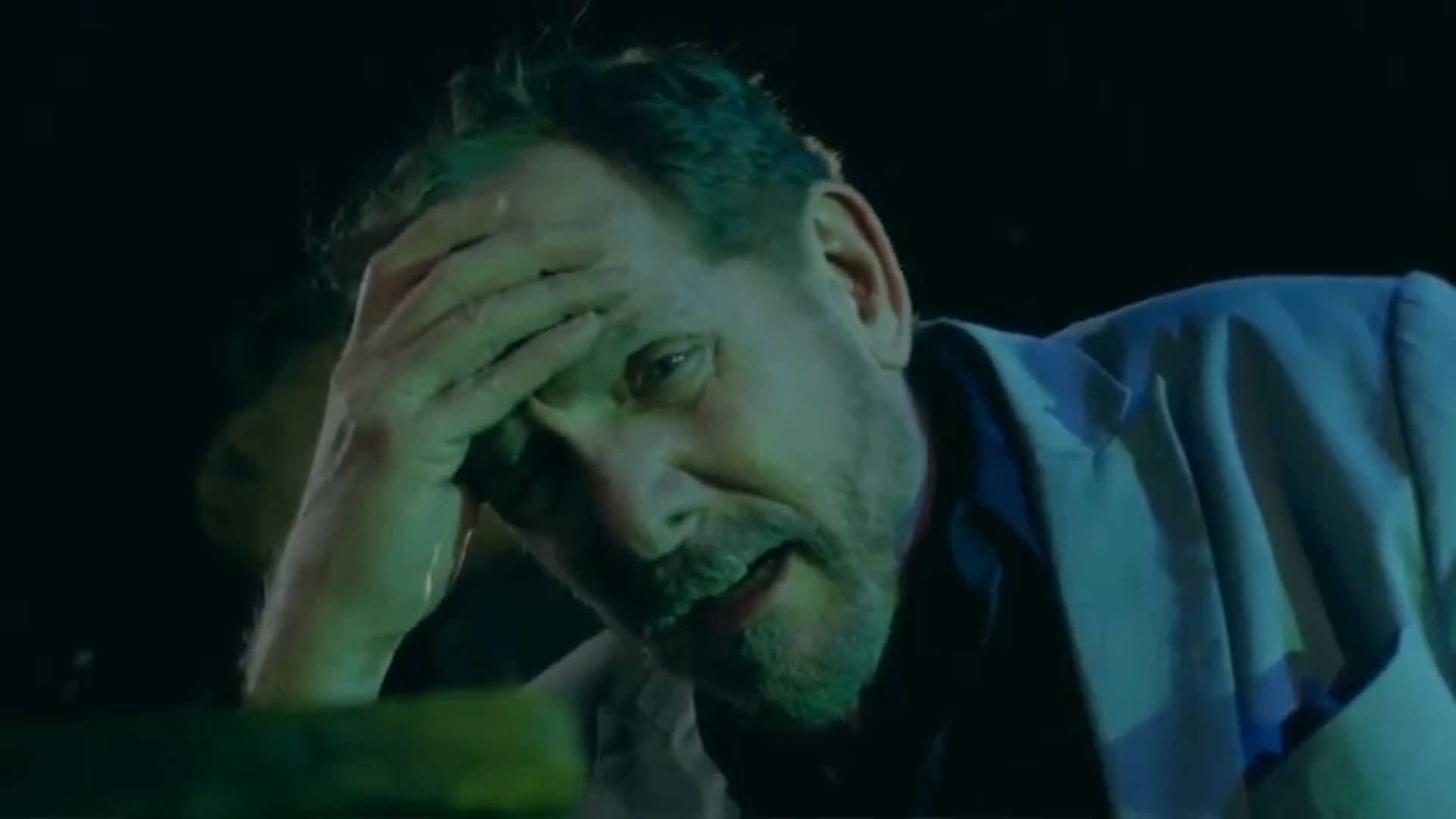 And of course one of those traditions McPherson draws on are Irish ghost stories, the sense of the otherworldly.

Yeah, he’s very interested in the paranormal – or at least, the dead haunting the living.

Which is pretty much Irish history, the dead haunting the living.

Now you performed St. Nicholas before – several years ago, live, onstage at the Undermain. A solo performance like that is very dependent on the interaction between actor and audience. So you must have re-thought how you’d play this in front of a camera and in an empty theater.

Of course, the first time I did it was 19 years ago, and now I’m more the right age for the role. And at that time, I was worried about, ‘Well, are they going to get into the story or are they going to be looking at their watch?’ And I went back and looked at an archival video that we had of that production, and it was fine. But I was playing to the room – like you say, I was interacting with the audience.

So the adjustment here is, well, let’s make the performance geared to the camera and through the camera, you regain contact with that audience. And although it’s happening more and more because of this medium, it’s unusual. I mean, even in film, you don’t often have a direct address. But it allows for deeper layers of subtlety than we can even get in the Undermain.

You and Undermain Theatre have received national attention before this, but how does it feel being called ‘thrilling’ by Terry Teachout, the drama critic of The Wall Street Journal? [If you get blocked by the WSJ‘s paywall, this link gets you some of the review.]

I’m really very grateful to Terry for running that. He even talks about the voice I used for William [the vampire]. I wondered a lot about what kind of English accent I should use — you know, should he sound like Dirk Bogarde? But the actor he mentions —

I thought that was perfect.

One thing that struck me about Teachout’s review is not only is he trying to keep in touch with what’s happening outside New York, unlike most Manhattan-based critics — he’s been visiting theaters around the country for years, I met him at Theatre Three one time. What struck me was Teachout going into details about the quality of the whole design — of a streaming theater production — comparing it to Broadway shows he’s seen.

I mean, it’s a time when we are all – all of us, all of the theater companies — are trying to pivot. And I hope that it continues to bring attention to some of the other work that’s going on here. I mean, everybody’s really doing a lot of innovative stuff, just innovative ways to bring something out in a stream.

I mean, at first, I think we were all a little [sighs], you know, it’s frustrating, I mean, because all of a sudden you’re forced into this competition with Netflix. There’s just so much, too much to watch.

But it gives us this opportunity to try to re-invent something that was written as a piece of theater — into this other medium.

A sampler of other stage shows currently streaming from North Texas companies:

My Red Hand, My Black Hand — an audio play co-produced by Cara Mia Theatre and Soul Rep Theatre Company. It’s the regional premiere of Dael Orlandersmith’s drama about a biracial teenager and how her parents met.

the black album. 2020. resistance —  written and directed by the award-winning performer-playwright and Dallas native Regina Taylor, the black album is a collage of monologues, songs and scenes performed by SMU students. It will be performed live on the SMU Meadows YouTube channel Oct. 27-29.

Carmen and Fidelio — Through Nov. 8th, the Dallas Opera streams the classic Bizet opera of the seductive Spanish woman who dumps a soldier for a famous matador — and then dumps him, too. It doesn’t end well – but it does end with glorious music. Plus, Beethoven’s opera of a woman willing to do anything to free her imprisoned husband — presented through Oct. 27th.

Andi Boi — writer-director Bruce R. Coleman’s teen drama about a transgender teen’s first day back at school — but now he identifies as a boy. The Dallas Children’s Theater presents the streaming drama for grades 7 and up through July 20, 2021.

Shakespeare and the Suffragists — Honoring the centennial of the passage of the 19th Amendment, which decided American women really could vote, ShakespeareDallas presents a “virtual performance project” addressing some of Shakespeare’s more independent female characters and how they’ve been interpreted over the years. Co-written by Jenni Stewart and Julia Dyer – through Nov. 30th.

Daddy Long Legs — The Firehouse Theatre recently staged the 2009 musical about an orphan sent to collage by a mysterious person she calls “Daddy Long Legs.” Now Firehouse is streaming the taped live show through the end of the year.

Eurydice — Theatre Wesleyan presents Sarah Ruhl’s reimagining of the Orpheus myth through the eyes of the woman he loved who’s banished to the underworld. Staged as both a live production and a streamed one. Oct. 23-25th.

The Bippy Boppy Boo Show: 2020 Call-In Special — this one’s a “live-streamed-interactive event.” Basically, it’s the return of the Danielle Georgiou Dance Group’s wacka-doo variety show (“glitz, gags and glamorous ghosts”) to Theatre Too in a co-production with Theatre Three. A new live stage show will be streamed each night through Nov. 3.

The Tree — the world premiere of an immersive “American rock musical” commissioned by Imprint Theatreworks. The Tree is based on the debut album from the North Texas band, Veteran Children. Created by six local playwrights, the show will be presented live at the Samuell-Grand Amphitheater while also streamed Oct. 29 – Nov. 14.

We Are Here — a one-night only virtual premiere on Nov. 12th at the South Dallas Cultural Center. Actor-writer Antonio David Lyons tackles the subject of gender violence – men harming women, children and communities from America to South Africa.