Skip Navigation
Home > ArtandSeek.net > No turning back: Why the Dallas Symphony’s new robotic cameras are here to stay. UPDATED with audio.

Editor’s note: As the pandemic continues, KERA and The Dallas Morning News are collaborating to document its impact on North Texas’ arts and culture scene. The News’ Tim Diovanni and KERA’s Jerome Weeks learn about a pandemic invention of necessity that the DSO plans to keep.

It’s gala night at the Dallas Symphony Orchestra, and everyone’s dressed to the nines. In the audience are deep-pocketed donors and local luminaries, including Mayor Eric Johnson. On the Meyerson Symphony Center’s stage, German violinist Anne-Sophie Mutter and the DSO are playing film-score legend John Williams’ Second Violin Concerto, completed earlier this year.

Below stage level, out of sight from the musicians and audience members, a video recording is underway. Sitting in the middle of the room, director Andrew Alden follows the performance with a printed score. 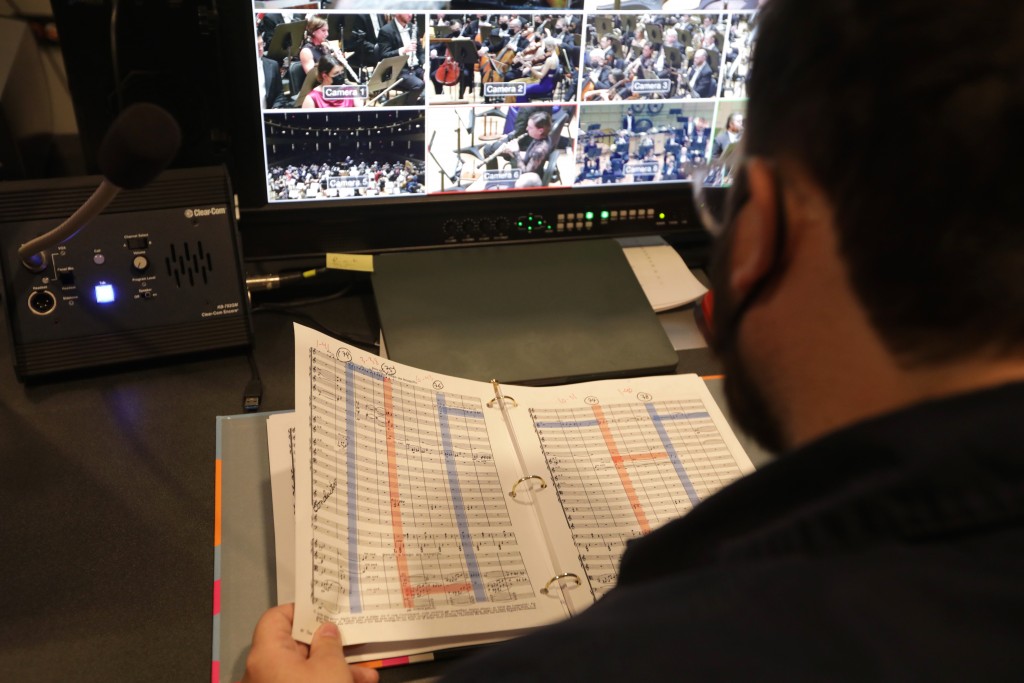 Now and then, he looks up at the TV and computer screens in front of him, and calls out camera changes: “Take 3!”, “Take 8!” And he occasionally tells the camera operator to pan the camera or zoom in or out.

Stationed near Alden, executive producer Denise McGovern reads out instructions for the camera operator — “3 to 36!”, “Send 2!”— sounding like a quarterback calling plays. There are some slack moments, but the space is generally abuzz with activity.

“I like to think that I can order the chaos,” Alden said a few days before the concert. “Sometimes there are as many as 100 people on stage, and it’s really hard to know what is interesting and important to bring out visually.”

None of this existed before the summer of 2020, when the pandemic moved up the DSO’s plans to produce concert videos.

“It was literally a turning point for many orchestras in the United States,” DSO’s president and CEO Kim Noltemy said. “Audiences who were very reticent or uninterested in digital content became interested. I believe we cannot turn back from that whole process.”

At the Sept. 25 gala, which also included Richard Strauss’ Don Juan, Alden, McGovern and their coworkers were watching feeds from 10 robotic cameras installed throughout the Meyerson. 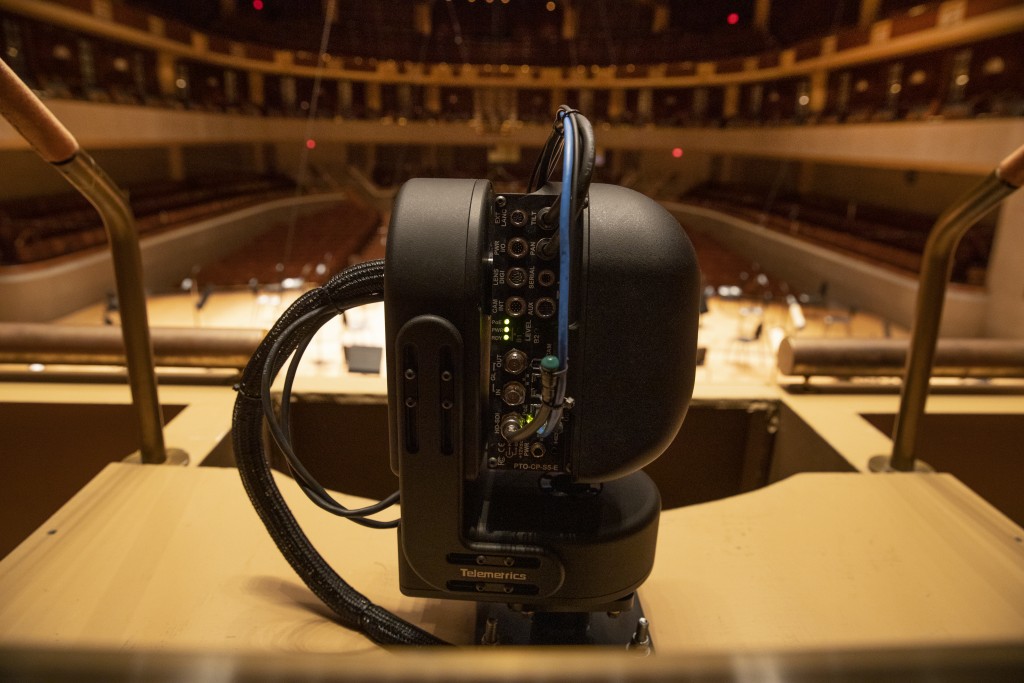 To prepare for the concerts, Alden spends about 20 hours listening to the music and marking scores on his iPad. He blocks out about 170 to 450 different camera shots for each piece, depending on its length.

During the Williams concerto at the gala, the camera shots generally focused on the soloist, Mutter, from a variety of angles.

The concerto features plenty of dialogue between the solo violinist and harpist — both of whom were at the front of the stage for this show — so the camera shots often switched between these two musicians or framed them together. 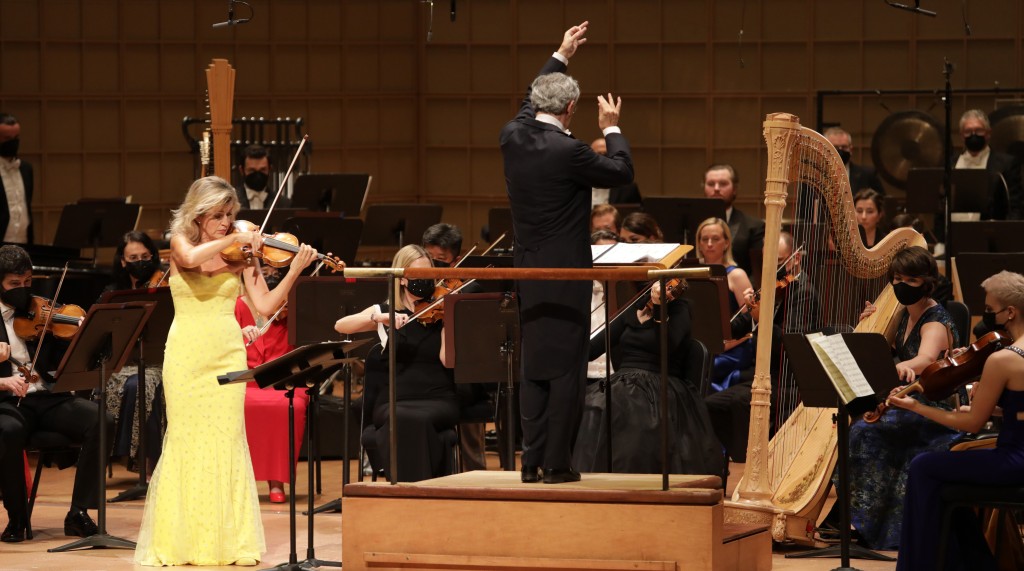 In other words, the music guided Alden’s interpretative decisions.

Because many of us experience visual content through our phones, Alden said he tries to create videos that would grab someone’s attention on social media.

“When I watch videos on Facebook, I very rarely turn the sound on until I’ve been engaged,” he said. “And that includes music performances.”

“When you’re in the Meyerson of course, the acoustics are amazing and it’s so fun to be there, but you’re much further away from the orchestra,” said Hannah Cope, a DSO subscriber from Heath. She mainly watched the videos on her iPhone last season. “With these videos, you get a much closer perspective. You can see the conductor’s and musicians’ facial expressions, and it’s interesting to see that.”’

The orchestra’s data shows the average viewer watched about 40% of the performances, which is a higher engagement rate than the DSO generally sees for videos it shares on social media.

Each video costs the orchestra about $5,000 to $10,000 to produce, and the DSO has brought in a “modest revenue,” Noltemy said. The orchestra charges $10 to watch a single concert and $125 for a digital season pass. Videos typically go online about nine days after the performance.

Perhaps the most high-profile video was the one capturing the historic collaboration between the DSO and Metropolitan Opera Orchestra in the spring. Led by DSO music director Fabio Luisi, who was principal conductor at the Met for six years, the two orchestras joined forces to give performances of Mahler’s First Symphony. The show was a benefit for the MET Orchestra Musicians Fund and the Dallas-Fort Worth Musicians COVID-19 Relief Fund.

This month, public television stations across America will air the DSO’s 90-minute video of the event, which includes a full performance, behind-the-scenes footage and interviews with musicians. North Texas’ KERA-TV (Channel 13) will broadcast the program on Oct. 29 and 31. 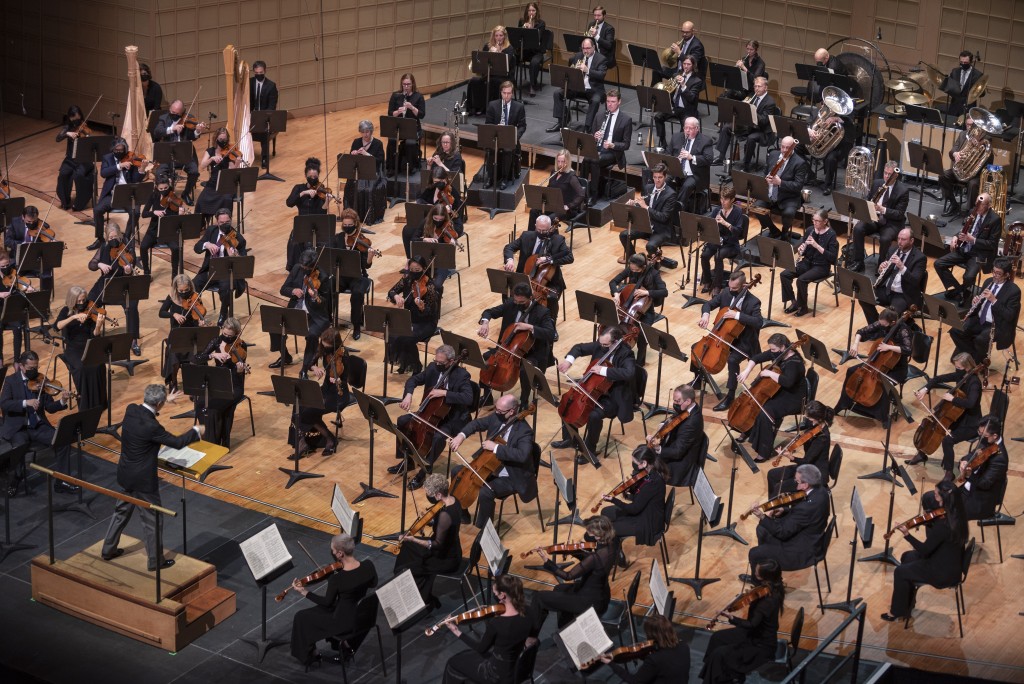 Dallas Symphony Orchestra music director Fabio Luisi, bottom left, conducts members of the Metropolitan Opera Orchestra and the DSO as they perform Mahler Symphony No. 1 on April 30 at the Meyerson Symphony Center. The DSO’s 90-minute video of the event will air nationally on PBS stations this month. North Texas’ KERA-TV (Channel 13) will broadcast the program on Oct. 29 and 31.

DSO representatives are especially proud that the concert videos have allowed the orchestra to broaden the reach of its educational programs.

For a four-concert youth event, the DSO can typically host no more than 7,200 students in person. According to the DSO, each of the youth concert videos had over 15,000 views last season. So, the orchestra more than doubled the number of students it can serve.

“I would say that’s one of the positive things that came out of the pandemic,” Noltemy said.

The videos have also made it easier for out-of-state friends and family members of DSO musicians to see their loved ones perform.

Tim and Stacy Hannigan, parents of DSO principal oboist Erin Hannigan, have streamed the videos from a laptop onto a 55-inch TV in the living room of their home in Durango, Colo., about 850 miles from the Meyerson.

“It sounds like we’re sitting in the concert hall,” Tim Hannigan said. “Every chance we get we play the concert videos. Actually, several times we played them more than once, we enjoy them so much.”

Alden, who lives in Detroit, has also worked on video concerts for the Detroit Symphony Orchestra. That group has presented free webcasts of performances for years, making it one of this country’s classical music pioneers in the virtual concert sphere.

Although he believes digital programming is no substitute for live concerts, Alden suspects it won’t go away any time soon.

“It’s so important for orchestras to put their stuff out there at a high quality,” he said. “I think this will last long after the pandemic is behind us, and actually invite people to the hall.”

A version of this story by Jerome Weeks will air on KERA-FM (90.1). It also appears on dallasnews.com and will appear in the Sunday, Oct. 24 edition.