Skip Navigation
Home > ArtandSeek.net > Those Van Goghs at the DMA? They’ve never been together before. Ever.

1. Why is Van Gogh and the Olive Groves not just another bunch of oil paintings on display?

Yes, they’re a bunch of van Gogh paintings on display, and as Nicole Myers, the Dallas Museum of Art’s interim chief curator, said, “It is never easy to do an exhibition of van Gogh’s works. His works are so popular, they’re iconic. They’re beloved the world over. Which means most museums don’t want to part with them for a long period of time. So it took many, many years to bring together this exhibition.”

What’s more, despite all the love and attention van Gogh’s works have received, this particular series has never been thoroughly studied. Or even brought together. In fact, no one knew for certain in what order they were painted. And the paintings change drastically in colors and styles, indicating van Gogh was repeatedly re-thinking his approach to painting.

But in what way? What direction?

“So it was critical to us,” said Myers, “that we get as many [of the artworks] as possible to be able to unveil these paintings to be seen together, the way van Gogh intended.”

The first four paintings in the exhibition in what is believed to be chronological order:

In Paris, the artist had seen some of Claude Monet’s early series (Monet would go on to paint his beloved Rouen cathedral and water lily series). Van Gogh was trying something similar — but not just as an Impressionistic exercise in the changes in light and color. The Garden of Gethsemane, where Jesus prayed and was betrayed, is on Mount Olive in Jerusalem. So the olive grove meant more to van Gogh than a botanical study. As is so often the case with his landscape treatments, it has a spiritual or symbolic energy.

Seeing them all together is why, Myers said, she wanted the paintings literally on display together, all in one room: Visitors will see ten of the olive grove painting in a single, circular gallery near the start of the exhibition.

2. How did the show come about?

When Myers was working at the Nelson-Atkins Museum, she became fascinated by the single olive grove painting the Kansas City museum has. In his letters, Van Gogh describes the olive trees’ shadows as “purple” — but they’re not. At best, they’re deep blue.

Art historians have known for years that Van Gogh and other 19th-century painters such as Renoir experimented with different paints. Van Gogh himself used a mixture of mineral-based paints and what are known as “red lake” paints. These are organic and much more prone to fading (Van Gogh’s paintings of roses are now almost completely white). Myers said Van Gogh knew about this color instability.  This justified — he wrote in his letters — his use of even stronger, bolder colors than he might have employed otherwise. He wanted to stave off their inevitable deterioration into softer, fuzzier shades.

What he probably didn’t know is that even by the end of his life — less than a year away — the colors would already be visibly fading.

The last six paintings in the main gallery at the DMA:

Alll of this intrigued Myers because as van Gogh checked himself in and out of the asylum of Saint-Rémy-de-Provence, the artist became fascinated by a nearby grove of olive trees and painted them several times, capturing the trees during the changing seasons, at different times of day. This makes his grove paintings fundamentally different than his more familiar wheatfield paintings from in and around Arles: different light, different landscape, different vegetation.

When Myers visited the Van Gogh Museum in Amsterdam to pursue all of this, she found an ally in Nienke Bakker, senior curator of paintings there. And when Myers came to the DMA in 2016, she brought this collaboration with her — with Bakker as co-curator of the exhibition.

The cross-Atlantic research effort led to what they believe is a chronology for the paintings. This is significant. It shows van Gogh responding not just to the landscape but to efforts by his friends Paul Gauguin and Émile Bernard, both of whom were painting in the same thematic area, Christ in the olive garden. It also indicates that his abrupt shifts in style do not reflect his changing mental state. There is no easy, one-to-one correspondence.

Myers believes that together, the paintings are a true set, intended to be displayed together, the way van Gogh saw Monet’s paintings in that Paris gallery. At the same time, she argued that one of the olive grove paintings, the one with the white swirl of clouds overhead, is actually a ‘pendant’ painting (the pair in a set of two) to his much more famous, “Starry Night,” painted in June 1889, the same month. Like “Starry Night,” it was not painted outside (en plein air) — a fact that can be determined by the materials trapped in the paint (including, in one case, a grasshopper). So like “Starry Night,” it was created out of memory and imagination. Much of the research behind all these conclusions can be seen in a long middle gallery in the exhibition, which includes a wide variety of displays about chemistry, light and history.

As for the issue of color deterioration, Myers said during a press preview Thursday that she’d expected the red tints to have faded — as well as the mixed colors that include red, like purple. But she discovered that van Gogh more or less included red lake pigments in everything. The worst fading can clearly be seen in the last of the paintings in the exhibition, the one with two olive pickers, painted in December 1889.

It lends a touch of heartbreak at the end. After all the vivid swirls and strokes and skyrockets of color you’ve seen in Van Gogh and the Olive Groves, looking at this last one is like looking at a van Gogh through a dusty window. You’re trying to peer through time. 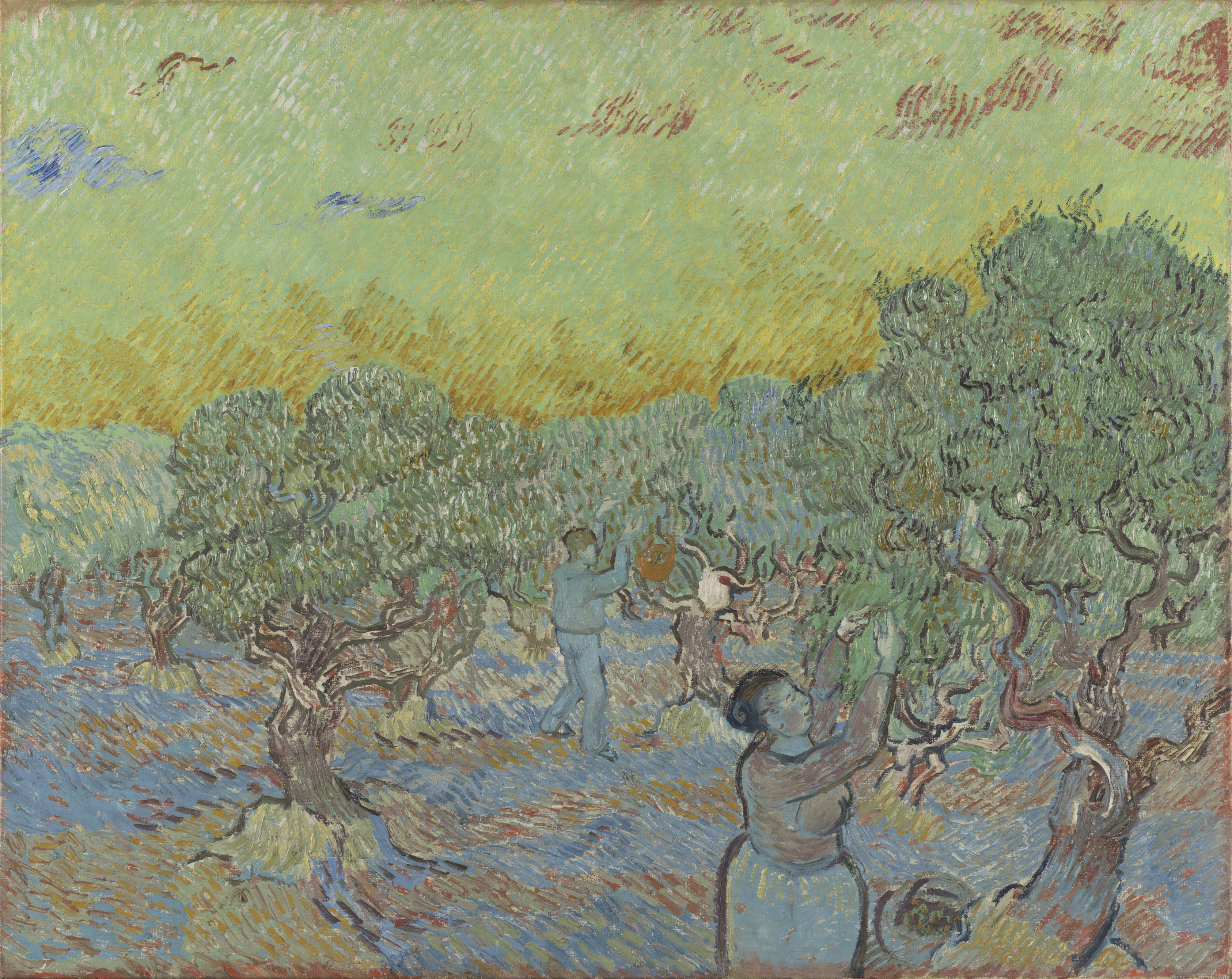