Growing up in the 1960s, Denise Montgomery would count down the days until the second Monday in October, when she got to skip school and go to the State Fair of Texas.

“There is an area at the park where they have the pretty fountains going down the middle,” Montgomery remembers. “We would sit outside on the park bench and we all ate our dinner or whatever. If we were good, we would get some cotton candy.”

But one year, when Montgomery was 10, rain was coming down in sheets and her grandma said they couldn’t go.

She didn’t realize until years later that the fair was still segregated and Black families like hers could only attend one day a year: Negro Achievement Day.

The parade and fanfare around the day drew thousands of Black visitors from across the state.

It was presented as a day to celebrate their achievements throughout history, but Collin College history professor Michael Phillips says not everyone saw it that way.

“It was something that just reinforced racism rather than celebrating a day of black achievement, which is what has been presented by the white leadership,” he says.

Pushing back against a segregated state fair

Phillips, who’s also the author of a book exploring the history of racism in Dallas, says some people viewed the day as just a gimmick to placate the Black community. Back then, local civil rights leader Juanita Craft called it “Negro Appeasement Day.”

“She saw it as accommodating Jim Crow,” Phillips says. “That just setting off a day only reinforces racism and gives power to the notion of separate and what is obviously unequal.”

In the 1950s, Craft and other members of the NAACP Youth Council of Dallas organized a boycott to press for desegregation of the fair.

Craft was unsuccessful, but about a decade later — in 1967 — the fair was finally desegregated.

Denise Montgomery remembers how odd it was that year. 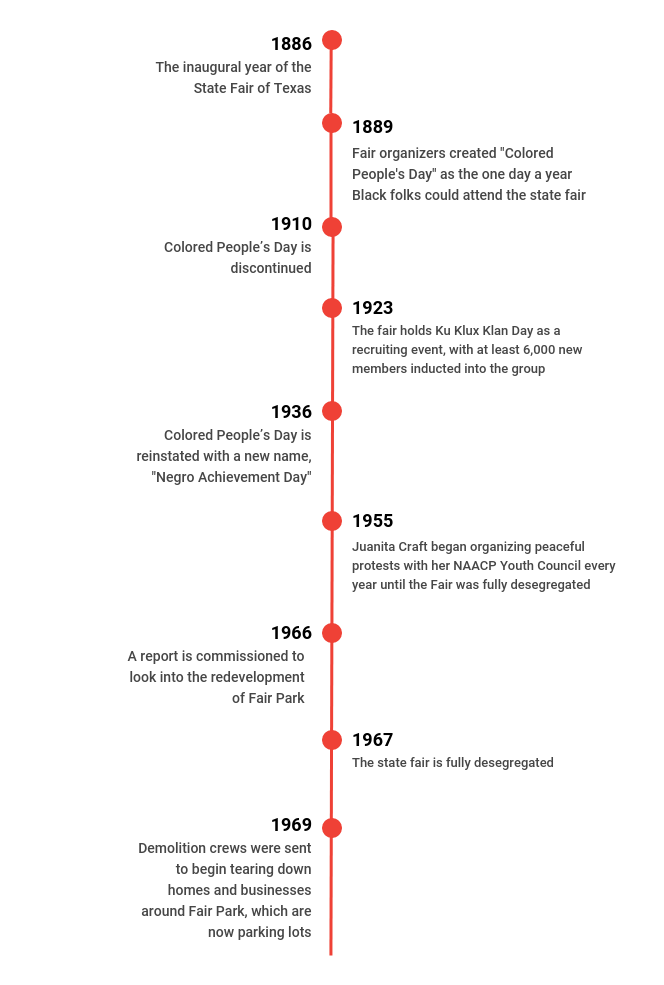 The impact on Fair Park persists

Around the same time the fair was desegregated, the city noticed a decline in ticket sales and commissioned a report to find out why. Phillips says the report found that white residents were uncomfortable attending the fair because of the poor Black communities surrounding Fair Park.

So in the early 70s, Dallas bought and bulldozed homes and businesses owned by Black families, to make room for more parking lots at Fair Park.

This had huge economic impacts on the community that are still present today.

In 2017, the Foundation for Community Empowerment published a report that found from 1970 to 2013, the number of housing units in the city went up by 72%. But housing around Fair Park went down by more than 50%.

Property values across Dallas have also increased four times faster than those near Fair Park.

Learning from the past 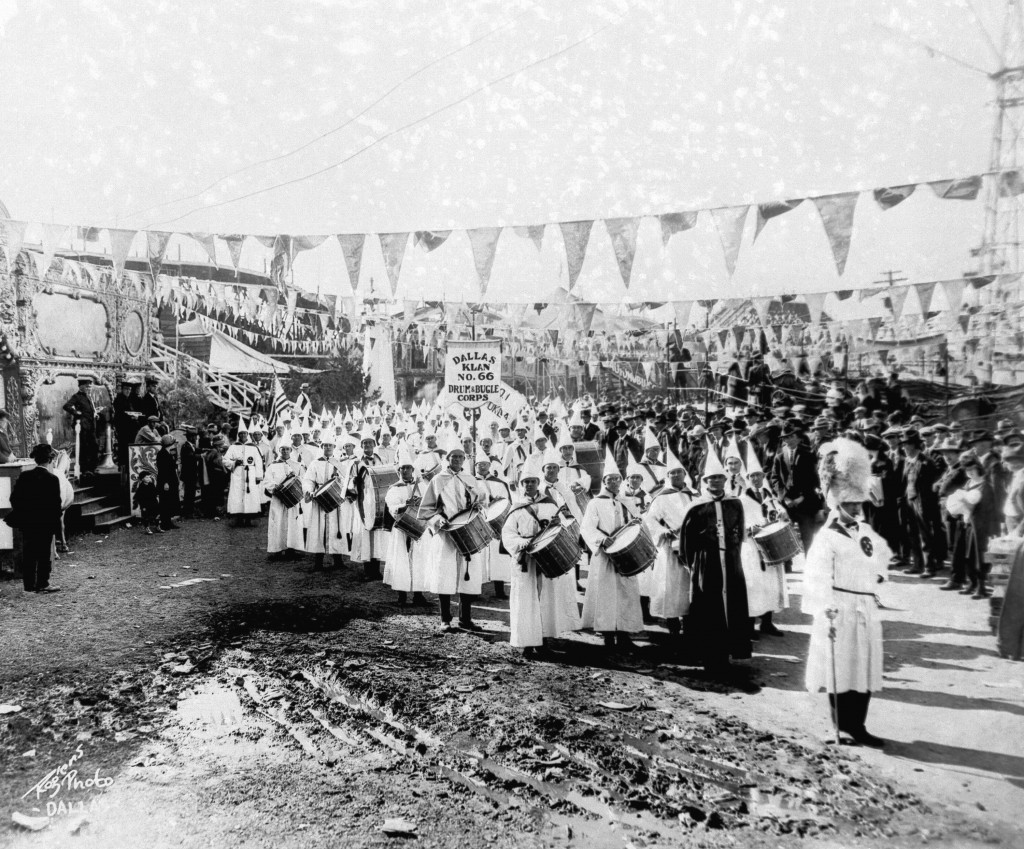 The Fife And Drum Corps of the Dallas Klu Klux Klan arriving at the state fairgrounds on October 29, 1923. The fair used to host “Klan Days” as recruitment events for the white supremacy group. Michael Phillips said proportionally, Dallas had the one of the biggest Klan membership in the country in the 20s. Photo credit: Associated Press.

Froswa’ Booker-Drew is vice president of community affairs and strategic alliances for the State Fair of Texas. She says the fair acknowledges its racist past and is putting in the work to do better moving forward.

“I think we really are trying to change the narrative on what does it look like for a fair to be engaged beyond just the event?” she says. “I wanted to make sure that we were trying to effect change at an organizational systems level.”

Booker-Drew says her team works with local grassroots organizations in South Dallas, ensuring they have the resources and funding they need.

That’s just one of three main areas her team focuses on, Booker-Drew adds. They hope to improve education and economic development in South Dallas, through scholarships, job fairs and other initiatives throughout the year.

Her team also acts as advocates for the community’s needs and to make sure any new projects or initiatives the city wants to bring to South Dallas will be beneficial to its residents.

“That’s a lot of what we do to be a better neighbor,” Booker-Drew says.  “It’s the advocacy to say, ‘Hey, this is what’s needed in our area.’”

But, Booker-Drew believes there’s still plenty of work to be done.

Denise Montgomery said a lot of progress has been made since she was that little girl who couldn’t go to the fair.

About two years ago, she decided to write about her experience, telling the story of that rainy October Monday through the eyes of a fictional little girl in her book, “I Want To Go.”

She hopes the book will be a lesson to younger generations.

“If we don’t learn from our history, we’re bound to repeat it,” she says.