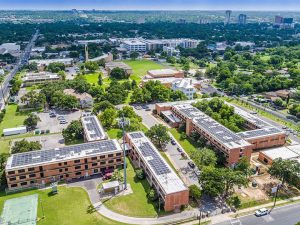 Huston-Tillotson University is a HBCU in Austin, Texas merged from the former schools of Tillotson Collegiate and Normal Institute and Samuel Huston College. Tillotson Collegiate and Normal Institute was charted as a coeducational school in 1877 and opened on January 17, 1881. After being developed out of a Methodist Episcopal conference in 1876, Samuel Huston was established in 1883. Having similar interests and values trustees of both schools met on January 26, 1952 to discuss the details of merging. Later that year in October the school was officially merged, and remained a sole provider of higher African-American education until the Brown vs. Board of Education case. On February 28, 2005 the institution’s name was changed to Houston-Tillotson University.