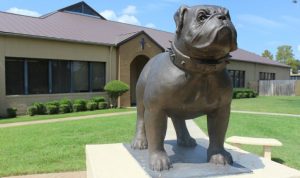 Jarvis Christian College began in 1913 with an enrollment of twelve students. Originally the college began as Jarvis Christian Institute, which was modeled after the Southern Christian Institute of Edwards, Mississippi. The school remains in Hawkins, Texas on the 456 acres of land deeded from Major James Jones Jarvis and his wife. The demanded conditions for the deeded landed was that it “keep up and maintain a school for the elevation and education of the Negro race… in which school there shall be efficient religious and industrial training”.