St. Phillip’s College was established in 1898 by Jame 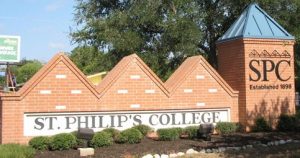 s Steptoe Johnston who was a bishop of St. Phillip’s Episcopal Church of the West Texas Diocese. The school was originally designed to educate and train recently emancipated slaves. On the first opening day the school began as a weekend sewing class for six black girls. The institution progressed drastically from an industrial school for girls, to a high school, and later a junior college. After leaving La Villita the institution moved to its present location in San Antonio, Texas. Today St. Phillip’s college is designated as both a HBCU and a Hispanic-serving institution with a Hispanic population of 51%.