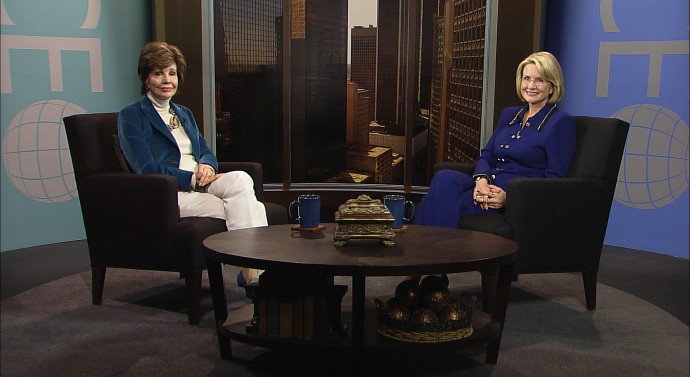 On the June episode of CEO, host Lee Cullum talks with FASTSIGNS CEO Catherine Monson about how she is positioning the company for expansion well beyond its 550 worldwide locations.  Monson details the difficulties she faced taking over the helm during the depths of the recession.  Learn how the CEO got a unique perspective of the company on reality TV show, Undercover Boss.  Monson shares strategies that helped her navigate a turbulent childhood and her disciplined approach to harness the power of positive thinking.

Catherine Monson is the CEO of FASTSIGNS® International, Inc., the worldwide franchisor for the more than 550 FASTSIGNS® sign and graphic centers located in the U.S., Canada, the UK, Brazil, Mexico, the Caribbean and Australia (where centers operate as SIGNWAVE®). With over 30 years of experience in the franchise industry with Franchise Services, Inc., prior to coming to FASTSIGNS, Catherine was instrumental in advancing the processes and functions of the franchise system while also focusing on how to improve franchise partner satisfaction. She has extensive experience in operations, franchise development, sales, training and marketing/communications. In 2009, she was the recipient of the IFA’s prestigious Bonny LeVine Award, given annually to a female franchisor in recognition for her demonstrated ability in franchising through contribution to the growth of the business; contributions to her community through board positions, volunteer work and activities that promote the professional advancement of women; and her contributions as a mentor to women in franchising. In July 2010, she was honored by the Dallas Business Journal as one of the top 25 Women Industry Leaders in the Dallas Metroplex and in 2012, Catherine appeared on the two-time Emmy Award-nominated reality serious, Undercover Boss, to learn new ways to further advance the FASTSIGNS brand.